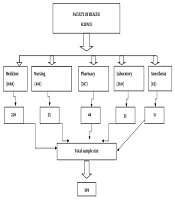 Magnitude of Mental Distress and its Determinants Among Medical and Health Science Regular Undergraduate Students at Jimma University: Institutional Based Cross-Sectional Study

Therefore, this study attempted to assess the magnitude of mental distress and its determinants among medical and health science regular undergraduate students at Jimma University.

A descriptive institutional-based with cross-sectional study design was conducted at Jimma University from March to April 2017 on regular undergraduate medical and health science students of the Faculty of Health Science. Study participants were selected from each batch using simple random sampling techniques and from the department by lottery method. Mental distress was assessed by using Self-Reporting questionnaire-20. Participants with score of eight and above on the Self-Reporting questionnaire-20 were considered as having mental distress. Chi-square and descriptive statistics were done using SPSS-20.

From a total of 369 study participants, about 354 gave the response rate of (95.9%). The magnitude of mental distress among medical and health science students was 35.03 %. Most of the respondents were males by sex and the mean age of the respondents was 23 years with SD ± 6. Age, sex, year of study, the practice of religion, presence of family history of mental illness, department choice, and ever use of substance (chat chewing and alcohol) were predictor variables and significantly associated with mental distress at P < 0.05.

The magnitude of mental distress in our study was 35.03% and it needs intervention and addressing the mentioned factors significantly associated with mental distress.

Mental distress (or psychological distress) is a term used to describe symptoms and experiences of a person’s internal life that are commonly held to be troubling, confusing or out of the ordinary activity (1, 2).

Although mental distress affect any one numerous studies reported that high burden of mental distress found in university students compared to the other general population (3, 4), despite that its burden varies considerably from nation to nation or country to country according to previous studies finding, the magnitude of mental distress at French was 25.7% in first-year university students (5), in Australian 67.4% (6), in America 82% (7), in Canada 30% (8), in Malaysia 41.9% (9), University of Hargeisa, Somaliland 19.8% (10), and in Ethiopia(low income country), it ranges of 21.6% - 49.1% in different universities (11-16).

The reason behind the high burden of mental distress is because of university students have multiple stressors including academic load, constant pressure to succeed, academic competition with peers, financial burden, peer, teacher or parental pressure as well as concerns and worry about their future (17-19). Stress throughout education can lead to mental distress and harm cognitive functioning and learning (20-22), especially, it is more common among medical and health science students due to specific reasons like the nature of their education and separation from preexisting social support (19, 22-25).

So in university students, it is an important health challenge (26, 27), but it is under-recognized and possible factors were not well addressed especially among medical and health science students.

This study attempted to assess the magnitude of mental distress and factors associated with mental distress at Jimma University medical and health science which will be helpful for different stakeholders and mental health professionals to intervene the factors accordingly.

The sample size was determined by using single population proportion formula by taking prevalence from the previous study (40.9%) from University of Gondar (21), 95% confidence interval with 5% margin error.

n = 371, since the source population is smaller than 10,000, population correction formula was used to determine adjusted minimum sample size as follows:

Inclusion and exclusion criteria were as follows; Health Science students who attained their education at Jimma University in the 2017 year of study were part of study whereas students asked withdrawal before data collection and who can’t able to fill to the questioners at the time of data collection excluded from the study.

Stratified random sampling technique applied to select the participants’. The variable of stratification were years of study of students, and assuming that their mental status may be different as their year of study increased because it influences their behavior. Out of 10 departments, a lottery method was used to pick the department and then the departments were categorized into their batches to pick the proportion of students per the number of students in their batch. Thus, Medicine, Pharmacy, Nursing, Medical laboratory, and Anesthesia were selected. Then for each department, samples were proportionally allocated (Figure 1). After that again it was reallocated to their year of study and by using the name list of students’ then participants selected randomly by using lottery method and approached individually by the principal investigator at the time when they finished their class and they informed to fill the prepared questioners individually. 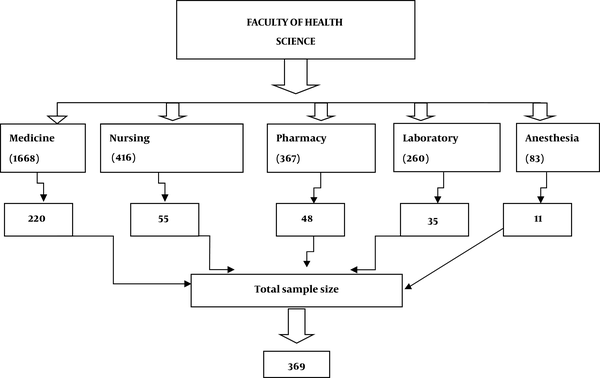 First questionnaires were prepared in English language containing socio-demographic characteristics and associated factors of mental distress after exhaustive reviewing of different and relevant literature and translated into local languages (Afan Oromo and Amharic). Data collected by using Self-Reporting questionnaire-20, self-administered structured questionnaires to assess mental distress with a cut-off point eight and above (28).

The collected data were cleaned, checked for completeness, coded and entered into Epi-data version 3.1software and exported to SPSS version 20 statistical software for analysis. Descriptive statistics used to summarize the results. Chi-square tests were done to see the relation between dependent and independent variables at P value < 0.05 and predictor variables were declared at P value < 0.05. Finally, the obtained results presented using narration and tables.

Written informed consent was obtained from the involved participants for their participation after the nature of the study was fully explained to them. The right to withdraw was respected, confidentiality kept and data collection was done respectfully.

Study participants who were positive for mental distress at the time of screening by adding the positive response after they filled the questioners were referred and linked to Jimma university Medical Center Psychiatric Clinic for further assessment and treatment.

4.1. Substance Use Status of Study Respondents

Magnitude of mental distress among medical and health science students in this study using SRQ-20, with a cut-off point 8 and above was 124 (35.03 %) (Table 3).

This study revealed that the magnitude of mental distress was about 35.03%. This finding is lower than USA (57%) (7), Australia (53%) (6) and Malaysia (41.9%) (9) studies. This could be due to the socio-cultural and environmental factors difference between participants, and also lower than the study finding from Gondar University (40.9%) (12) and Adama University (21.6%) (15) Ethiopia. This might be due to the study time variation; the improvement of infrastructure and mental health service option provided by universities to the students in this time variation. However, the magnitude was higher than studies from French 25.7% (5), Canada (30%) (8) and Hargeisa, Somaliland (19.8%) (10), when compared within our country Universities, it is similar with the study done in the Addis Ababa University (32.6%) (16), Aksum University (39.6%) (14), and Hawassa University (30%) (13).

The magnitude of mental distress in our study was higher among female students as compared to their male students. The finding is similar with other studies at Aksum University (14), in Amritsar, Punjab, India (25), Hargeisa, Somaliland (10), and at the Kingdom of Saudi Arabia (22). This might be because of females able to express their emotions and high stress related to hormonal changes.

This study shows that there is a significant relation between mental distress and ever use of a substance (chewing khat and drinking alcohol). A similar finding was reported from Hargeisa, Somaliland (10). This might be because of the high availability of khat in the area and the substance itself makes them vulnerable for mental distress.

Moreover, this study also identifies age and department choice has a significant association with mental distress at P < 0.05, which might result from thinking about their future career and payment and consistent with the finding from India (25), Saudi Arabia (22) and Aksum University (14).

This study also found that mental distress associated with religious practice, even though most literature didn’t consider religion as a variable. Students who were involved in the religious program, irrespective of what religion they follow, were less likely to develop mental distress, and consistent with studies done in Ethiopia (15, 29). This might be because of religious teachings and doctrines helps students with stress management. Furthermore, it facilitates the development different coping mechanisms.

In this study, parent marital condition, ethnicity, and substance use like tobacco smoking and current use of non-prescribed recreational drugs of the respondents were not associated with mental distress and similar findings reported (13, 16), but it needs investigating the time and process of parental relationship.

There were some limitations in this study it is difficult to know the cause-effect relationship because from its nature of the cross-sectional study and environmental factors which might affect mental distress not included in this study and it needs further study.

The prevalence of mental distress in this study was significantly high and it needs intervention and addressing the mentioned factors associated with mental distress.

Age, sex, year of study, the practice of religion, family history of mental illness, department choice, and ever use of substance (chat chewing and alcohol) has a significant association with mental distress.

Stress-prevention strategies for students who have any level of psychological stress are recommendable and helpful for them.

Copyright © 2020, International Journal of Health and Life Sciences. This is an open-access article distributed under the terms of the Creative Commons Attribution-NonCommercial 4.0 International License (http://creativecommons.org/licenses/by-nc/4.0/) which permits copy and redistribute the material just in noncommercial usages, provided the original work is properly cited.
download pdf 204.90 KB Peer Review Comments ( 140.74 KB) Get Permission (article level) Import into EndNote Import into BibTex
Number of Comments: 0