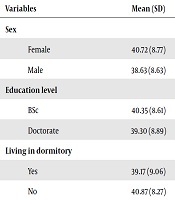 Flourishing: A Cross-Sectional Study on Academic Achievement in the Students of Kermanshah University of Medical Sciences, Iran

Flourishing is a psychological construct that refers to the type of living together with permanent happiness in human functions. Individuals with high levels of flourishing are aware of their abilities, keen on progress, and considered beneficial community members.

The present study aimed to determine the flourishing status and its association with academic achievement in the students of Kermanshah University of Medical Sciences, Iran.

This cross-sectional, descriptive-analytical study was conducted on 295 students at Kermanshah University of Medical Sciences in 2018. The students were selected via simple random sampling with proportional probability to size. Data were collected using a self-report questionnaire. Data analysis was performed in SPSS version 16 using independent t-test, one-way ANOVA and Pearson’s correlation-coefficient at the significance of 95%.

The improvement of academic performance in college students is a primary goal of universities, which is the basis of success and progress (1). However, about a quarter of college students are at the risk of academic failure and other behavioral issues, and approximately 12% of medical students experience failure during their studies for at least one semester (2). Academic achievement is an integral part of the literature on learning and academic performance, and education experts have recently paid more attention to the assessment of the influential factors in this regard (3). Academic achievement indicates the academic status of students and encompasses the average score of one or a set of semesters (4).

According to the literature, educational environments are brimming with emotions such as learning pleasure, hope, pride, anxiety, anger, shame, hopelessness, and fatigue (5). These emotions play a key role in the motivation, learning, and health of students (6). In positive psychology, rather than focusing on disorders and their psychological effects, attention is paid to the positive aspects of the human psyche (7), and concepts such as goodness, generativeness, development, resilience, and wellbeing are among the important positive dimensions in this regard (8).

Flourishing is a construct in positive psychology that refers to the lifestyles that are accompanied by long-lasting happiness in human performance, implying goodness, generativeness, development, resilience, and wellbeing (9). Flourishing is in contrast to depression and languishing (the state of meaninglessness and hollowness). In this respect, Keyes does not recognize mental health as the absence of mental illnesses, but rather as a separate dimension of positive emotions and functioning (10). Keyes states that flourishing is a manifestation of adult mental life, which is associated with high levels of emotional wellbeing, happiness, satisfaction, and desire for a purposeful life, along with the acceptance of all personality traits, feelings of self-sufficiency, and independence, which enable individuals to have inner control and chooses their destiny (11).

Evidence suggests that individuals with high flourishing levels have positive emotions, emotional stability, vitality, optimism, flexibility, self-confidence, social interactions, competence, and positive relationships (12). Furthermore, they are self-satisfied, aware of their abilities, have a great desire for progress, and are considered as beneficial community members (13). Therefore, this concept has negative and inverse correlations with loneliness, depression, isolation, self-harm, and extreme imitation (14, 15). In general, flourishing could be evaluated along with essential human needs such as self-actualization (16). The findings of a study in Iran showed that the flourishing status in Iranian medical students was favorable (16).

The present study aimed to determine the flourishing status and its correlation with academic achievement in the students of Kermanshah University of Medical Sciences (KUMS), Iran.

This cross-sectional, descriptive-analytical study was performed on the students of KUMS. For sampling, different schools (medicine, dentistry, pharmacy, health, nutrition, nursing and midwifery, and allied medical sciences) were initially considered as the classes, and the participants were selected via random sampling in proportion to the size of each school using a self-report questionnaire. The participants were informed of the study procedure and ensured of confidentiality terms regarding their personal information. In addition, the objectives of the study were explained, and the students willing to participate were enrolled. The only inclusion criterion was the students of KUMS, and the exclusion criteria were the lack of interest to participate and incomplete questionnaires.

The sample size was estimated at 131 based on the study by Moradi Siah Afshadiet al. (16) with the test power of 99%, 95% confidence interval, and 20% probability of attrition, which was estimated to be 158. Since we used the cluster sampling method and in order to increase the reliability of our findings, the sample size was multiplied by two, and 316 students were evaluated.

Data were collected using a two-part questionnaire, which was completed by the students in a self-report manner.

Flourishing was evaluated using an eight-item standard questionnaire (e.g., “I am very capable and competent in the activities that are important to me.”), which has been designed by Diener and Biswas-Diener (17). Each item was scored based on an ordinal seven-point Likert scale within the score range of 8 - 56. The psychometric analysis of the questionnaire in Iran has been performed by Moradi Siah Afshadi et al. (16), and the reliability of the instrument was estimated at 0.76 in the present study.

Data analysis was performed in SPSS version 16 using one-way analysis of variance (ANOVA), independent samples t-test, and Pearson’s correlation-coefficient. In addition, the Cronbach’s alpha coefficient was used to assess the internal consistency of the measures.

The study protocol was approved by the Research Ethics Committee of KUMS (ethics code: IR.KUMS.REC. 1397.060).

Table 1. Mean, SD, and Coloration Between Flourishing with Age and GPA

aCorrelation is significant at the 0.01 level (2-tailed).

According to the findings of the current research, the students achieved 71.3% of the maximum score of flourishing. Consistently, Moradi Siah Afshadi et al. carried out a research on the students at Isfahan University of Medical Sciences (Iran), reporting the mean score of flourishing to be 49.43 (score range: 8 - 56), which indicated that their participants received 88% of the maximum score of flourishing (16). In another study, Slavin et al. stated that medical students lack adequate flourishing (18). The comparison of the result of the flourishing scores in the present study demonstrated that the mean score of flourishing was lower among the KUMS students compared to the other studies conducted in Iran. These findings are considered alarming to the Medical Education Development Center (EDC) in KUMS and should be the focus of designing interventions in this regard. Moreover, medical education planners must improve medical education programs tailored to health needs in order to promote community health, and comprehensive and continuous efforts are required to help students and other medical science groups ensure having the necessary orientations (18).

In order to promote flourishing in medical students, Seligman (19) offers five strategies to the medical education system, including the promotion of positive emotions (creating comprehensive programs to reduce stressors and promote the health of students), facilitating engagement (encouraging the development and maintenance of strong relationships), encouraging the development and maintenance of strong relationships (reducing unnecessary competition and promoting participatory learning to provide significant opportunities for group learning), helping students and residents find meaning in their work (fundamental changes in teaching and testing to reduce the extra burden of information), and encouraging and celebrating achievements (finding other ways for students to show excellence than performing in exams). These strategies could be used in the designing of targeted interventions to promote flourishing in students in various educational settings.

The results of the present study indicated a positive, significant correlation between the academic achievement score of the students and GPA, which is consistent with the previous studies in this regard. For instance, Moradi Siah Afshadi et al. reported a positive, significant correlation between flourishing and academic achievement among medical students (16). Regarding the impact of flourishing on academic achievement, Keyes believed that the students with a high level of flourishing are able to maintain their focus on their assignments (10). Furthermore, the study by Suldo et al. indicated that a proper education status (e.g., attending classes and proper grades) is directly and significantly correlated with mental health and flourishing (20). A favorable learning environment enables learners to pursue their educational goals and become more involved in educational activities (21, 22). Students with higher flourishing appear to have higher levels of academic participation and academic achievement (16). Therefore, special attention must be paid to this construct in order to improve the educational status of various students.

According to the results of the present study, the mean score of flourishing was higher in the students living at home compared to those living in dormitories, while the difference in this regard was not considered significant. In another study, Wang and Eccles reported that the parental support for students’ involvement in academic issues could predict their academic achievement (23). On the other hand, Fink evaluated the predictive factors of the mental health of students, reporting that a supportive environment at the university could increase flourishing in the students (24). It seems that the implementation of the necessary interventions and support of students could enhance flourishing and the academic progress of students.

Another finding of the current research was that the score of flourishing decreased with the increased age of the students although the correlation was not considered significant. In line with our findings, Mirzaei Alavijeh et al. reported an inverse, significant correlation between the increased age and motivational strategies in KUMS students (27). These findings may be alarming to the university officials and administrators as flourishing decreases with increased age. According to the literature, this issue may have several reasons, such as stricter curricula, living in dormitories, being away from the family, and stress of the future job.

One of the limitations of the present study was data collection using a self-report questionnaire, which might have caused some errors in the reporting of the data. In addition, data were collected from specific groups of medical students in KUMS, which makes it difficult to generalize the results to other students.

The present study was approved by the EDC in KUMS, which was carried out with the financial support of the vice-chancellor for research and technology of KUMS; we would like to thank all the students who participated in the study and all staff of KUMS

Copyright © 2020, International Journal of Health and Life Sciences. This is an open-access article distributed under the terms of the Creative Commons Attribution-NonCommercial 4.0 International License (http://creativecommons.org/licenses/by-nc/4.0/) which permits copy and redistribute the material just in noncommercial usages, provided the original work is properly cited.
download pdf 115.41 KB Peer Review Comments ( 106.88 KB) Get Permission (article level) Import into EndNote Import into BibTex
Number of Comments: 0