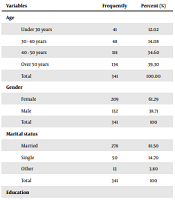 The Risk of Catastrophic Health Expenditures Due to Direct Non-Medical Costs in Patients: A Study of the Outpatients in Qazvin, Iran

how to cite: Asefzadeh S, Ahadi Nezhad B, Norouzi S. The Risk of Catastrophic Health Expenditures Due to Direct Non-Medical Costs in Patients: A Study of the Outpatients in Qazvin, Iran. J Health Rep Technol.7(1):e106944. doi: 10.5812/ijhls.106944.

Out-of-pocket payment encompasses the costs that patients pay for healthcare services, which is an inefficient approach to healthcare financing as it may lead to poverty.

The present study aimed to determine the risk of catastrophic health expenditures due to non-medical costs in the outpatients in Qazvin, Iran.

This cross-sectional survey was conducted on 341 outpatients referring to the internists of Velayat Hospital and Bu-Ali Sina Hospital in Qazvin. The required data were collected using a researcher-made questionnaire and the prescriptions of the patients. Out-of-pocket payments were defined as the direct medical and non-medical costs within one month.

The mean out-of-pocket payments of the patients in one month was 49.97 dollars, 75.8% of which covered direct medical cost (disease diagnosis and treatment), and 24.2% covered direct non-medical costs to receive health services. The highest out-of-pocket payments were for diagnostic/laboratory tests (50.3%), medications (21.5%), and transportation (18.2%). In addition, the exposure rate to catastrophic expenditures was estimated at 31%, and the patients with lower income had less exposure compared to those without incomes.

According to the results, direct non-medical costs were associated with the increased out-of-pocket payments of the patients, which in turn led to the higher rates of catastrophic expenditures.

The health expenditure of the gross domestic product (GDP) trend in the world and in Iran is increasing steadily (1, 2). In 2000, 4.7% of Iran's GDP was devoted to the health sector, while it reached 8.1% in 2016 (1). In addition, healthcare expenditures or direct medical costs in the world are on the rise, which is considered to be a major challenge for health policymakers (3, 4). In addition, non-medical costs have intensified the challenge through increasing out-of-pocket patient costs (5).

In general, patients incur the three categories of direct, indirect, and intangible costs in receiving healthcare services (6), and some of these costs are paid out-of-pocket. Notably, out-of-pocket payments are classified as direct costs, which refer to the costs of diagnostic and treatment processes (7, 8). Direct costs could be medical and non-medical; direct medical costs include the payments for disease diagnosis and treatment, patient admission, prescriptions, follow-ups, hospitalization, and rehabilitation (9, 10); in official statements, direct medical costs are expressed as healthcare expenditures. These costs are partly paid by insurance systems and partly by patients (5). Direct non-medical costs refer to the costs that patients must pay for access to medical services; such examples are medical commuting and transportation costs, accommodation costs, food costs or the phone charges required for setting appointments. These costs are also classified as out-of-pocket payments (11).

Out-of-pocket payment is the most inefficient and unfair approach to healthcare financing, which leads to the increased rate of poverty (12). In low- and middle-income countries, the main source of healthcare financing is the out-of-pocket payments of patients, which cause catastrophic health expenditures (CHEs) in households (13, 14). In these countries, the financing of the health system is poor and causes numerous households to sell their assets or borrow money to pay for healthcare expenditure (15, 16). Approximately 150 million experience financial stress each year due to the out-of-pocket expenditures for healthcare services, while 100 million face poverty (17, 18).

The present study aimed to determine the risk of catastrophic health expenditures due to non-medical costs in the outpatients in Qazvin, Iran.

This cross-sectional survey was conducted on the outpatients and caregivers referring to the internists of Bu-Ali Sina and Velayat teaching hospitals in Qazvin, Iran. The study protocol was approved by the Research Ethics Committee of Qazvin University of Medical Sciences (code: IR-QUMS.REC.1396.20).

The sample size of the study was estimated using the Cochran formula based on the trend of the previous year (26). Based on statistical formulations, the sample size was determined to be 341 outpatients. The patients were selected via cluster sampling, and data were collected via sample rotation within one month (December 22, 2017-January 22, 2018) with a one-month recall period. Finally, 341 outpatients were randomly selected from those referring to the mentioned healthcare centers.

Considering that Iran is a middle-income country (28), a threshold of 5% was set to determine whether payments were out-of-pocket for patients. The currency conversions were carried our based on the official exchange rate of December 22, 2017 (1$=34,214 Iranian Rials) (29).

Data analysis was initially performed in Excel 2013 and SPSS version 21 using mean, median, and standard deviation. In addition, graphs and ratios were prepared.

In total, 341 outpatients referring to the internal medicine clinics of Velayat Hospital and Bu-Ali Sina Hospital in Qazvin in 2017 were enrolled in the study. The mean age of the patients was 47.8 ± 13.7 years, and the highest and the lowest frequencies belonged to the age groups of 40-50 years (34.6%) and < 20 years (0.9%), respectively. The majority of the patients were female (61.3%) and married (81.5%). In terms of education level, the patients without a high school diploma had the highest frequency (67.7%). In addition, the majority of the examined outpatients were housewives (41.9%), and self-employed patients had the lowest frequency (2.3%). Approximately 89.5% of the patients had social security and health insurance coverage; among the insured patients, social security was most common, while Imam Khomeini Relief Foundation had the lowest frequency. Table 1 shows the demographic characteristics of the examined patients.

According to the information in Table 2 and Figure 1, the majority of the examined patients (67.7%) had no income. 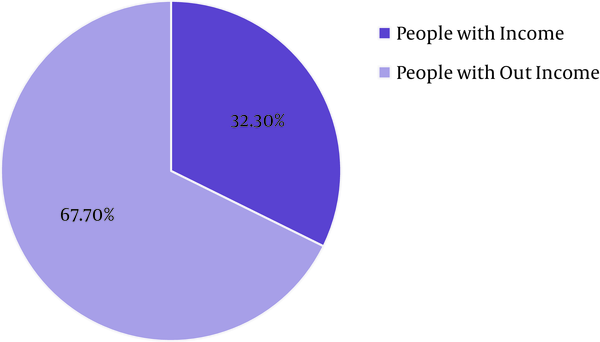 Frequency distribution of patients based on weekly income

Table 3 shows the mean income of the outpatients with income.

Direct non-medical costs included transportation, residence, and food of the patients and their caregivers, which were calculated to be 9.06, 0.78, and 2.19 dollars, respectively. In other words, the transportation costs had the highest share (18.2%) of the out-of-pocket payments for the direct non-medical costs. In addition, the sum of the direct costs represented the total out-of-pocket payments of the patients and their caregivers.

Table 5. OOP Descriptive Indicators for Details of Patients' Direct Costs in One Month

Table 6. Patients’ Exposure to CHE Matrix with and without Consideration of Direct Non-medical Costs in One Month

In the current research, the mean out-of-pocket payment per outpatient was calculated within a one-month period based on the share of the direct medical and non-medical costs using a novel approach. The main difference of our study with similar studies is that due to the shift in the perspective of the family unit from multidimensional families to individuals across various countries, costs and incomes are calculated per person rather than on a household basis. In order to meet the research objectives, questions were addressed regarding the out-of-pocket payments for direct medical and non-medical costs, rate of patients’ exposure to CHEs, and impact of direct non-medical costs on the patients’ exposure to CHEs.

According to the results of the present study, the patients' out-of-pocket payments were catastrophic in different situations. A large portion of the patients' income was reported to be allocated to health services and treatment, thereby leading to CHEs. In addition, the patients with no income were more likely to experience CHEs. In fact, direct medical costs caused 23% of all the examined patients and 8% of the patients with income to face CHEs.

Although all the patients were covered by insurance in the present study, they still had out-of-pocket payments for healthcare services. Therefore, it could be concluded that insurances have literally failed to cover the needs and costs of patients. In fact, insurance services must adequately and fully cover a wide range of the medical needs of their clients. Furthermore, the high costs and poor performance of supplementary insurances may be the reasons behind patients’ lack of interest in purchasing these services. According to Zhang et al., the shallow coverage of outpatient care is a major issue in the healthcare system (36). Although private and public insurance covers more than 90% of Iranians, studies have shown that more than 50% of health expenditures are paid out-of-pocket (22).

- The impossibility of patient follow-up and lack of accurate data on their costs; to resolve this issue, the patients' recent prescriptions were reviewed, and if a drug or test was prescribed and cost information was not available, the cost would be extracted based on the prescriptions.

- Calculation of out-of-pocket payments by dividing direct (medical and non-medical) and indirect costs using the same method in the patients with different diseases (inpatient and outpatient) in diverse geographical areas to determine the dominate share of each cost;

- It is recommended that similar studies be performed on both public and private sectors for the comparison of the results.

- It is recommended that similar studies be performed on the elderly and housewives who do not have income and are in a more vulnerable position when it comes to CHEs.

- Due to the individualistic view of family relations, it is recommended that individuals be examined rather than families for the reconsideration of CHE-related approaches.

Considering the national policy concerning the shift from inpatient services to outpatient services, it is anticipated that high out-of-pocket payments will cause severe issue for both the health system and patients in the coming years. Moreover, the high direct medical costs that are paid by outpatients out of their pockets require strong and coherent policies for the determination of the patients’ share. With the occurrence of illnesses, patients incur direct and indirect medical costs. Therefore, policymakers and decision-makers must consider direct non-medical and medical costs since direct non-medical costs add to the overall out-of-pocket payment of patients and increase the risk of CHEs.

Copyright © 2021, International Journal of Health and Life Sciences. This is an open-access article distributed under the terms of the Creative Commons Attribution-NonCommercial 4.0 International License (http://creativecommons.org/licenses/by-nc/4.0/) which permits copy and redistribute the material just in noncommercial usages, provided the original work is properly cited.
download pdf 156.98 KB Peer Review Comments ( 247.36 KB) Get Permission (article level) Import into EndNote Import into BibTex
Number of Comments: 0