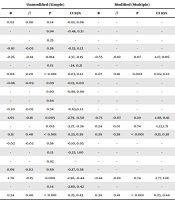 The Predictive Factors of Expectation Regarding Aging: The Role of the Sense of Belonging

The present study aimed to assess the correlation between the sense of belonging and expectation regarding aging in the elderly.

This cross-sectional study was conducted on 300 elderly residents in Tehran and Ghazvin, Iran. The expectations regarding aging (ERA-12) was used to evaluate the same variable, and the other measurement tool was the sense of belonging instrument.

Considering the obtained results, it is recommended that special attention be paid to psychological factors (e.g., sense of belonging) in order to improve interpersonal relations and healthy aging in the elderly. Furthermore, these factors have a significant impact on the life expectancy and quality of life of this population.

According to the United Nations, Iran is among the countries with a relatively large aging population. The problems of this vulnerable population and their growth in number highlight the need for future planning to control the issues faced by the elderly (1).

Expectation regarding aging (ERA) is an important issue this community group, which could be directly correlated with their adaptation to aging (2). ERA is defined as the expectations of an individual regarding physical and psychological health at an old age (3). Individuals tend to expect the highest levels of physical and mental performance while aging, which could be considered a manifestation of healthy aging (3). ERA could be positive or negative; the positive attitudes toward ERA promote kindness, wisdom, trust, and a sense of freedom (4). On the other hand, perceptions such as the assumption of continuous illness, age-related incapacity, physical and mental disorders due to aging, isolation, depression, and inadequate care of grandchildren could be among the manifestations of negative attitudes toward ERA (5-7). Positive expectancies about aging make the elderly more adaptable to aging to have a happier life (8). The results of a study in this regard confirmed that ERA affects physical and mental health, physical activity, and interpersonal relations (9).

Considering the role of cultural patterns, demographic characteristics, and psychological concepts (e.g., sense of belonging) in ERA (15), extensive research is required in this regard. To date, only few studies have been focused on this concept in Iran. The present study was aimed to assess the correlation between the sense of belonging and ERA in elderly adults.

This cross-sectional study was conducted on 300 elderly individuals from Tehran and Qazvin, Iran who were selected via convenience sampling during December-February 2019. The inclusion criteria of the study were as follows: (1) age of ≥ 60 years (Karppinen, #233); (2) awareness of time and place; (3) ability to communicate; (4) no severe stress within the past five months based on self-report and (5) absence of mental disorders based on the patients’ statements and experts’ examinations.

After obtaining the required permit from the Research and Technology Department of Mazandaran University of Medical Sciences and the selected healthcare centers, the researchers visited the setting and explained the research objectives to the elderly who were willing to participate in the study and met the inclusion criteria. At the next stage, questionnaires were distributed among the subjects in a calm environment. The researcher was next to the elderlies while completing the questionnaires, and the necessary explanations were provided in case of ambiguity. The returned questionnaires were reviewed by the researchers to ensure their proper completion.

The expectations regarding aging questionnaire (ERA-12) was used to measure the variable of ERA in the present study. The ERA-12 was developed by Sarkisian et al. (16) in 2005 with 12 items and three dimensions of physical health, mental health, and cognitive function. The items of the questionnaire are scored based on a four-point Likert scale (completely false-completely correct), and the final score is calculated within the range of 12 - 48. The validity and reliability of the instrument have been confirmed in several studies (2, 16). In addition, the reliability of the questionnaire was confirmed based on the Cronbach’s alpha in the elderly participants of the current research (α = 0.76).

The sense of belonging index was used to measure the sense of belonging in the subjects. The instrument was developed by Hagerty in 1995 with 27 items, which are scored based on a four-point Likert scale (strongly agree-strongly disagree) (10). The validity and reliability of this instrument have been confirmed at the Cronbach’s alpha of 0.7 - 0.9 in the study by Hagerty. In the present study, the Cronbach’s alpha coefficient of the scale was estimated at 0.63.

Table 2. Results of Simple and Multiple Linear Regression Model for Expectation Regarding Aging

Considering that the variables of economic status and sense of belonging could significantly predict the physical health dimension of ERA, they were analyzed using the multiple linear regression model. According to the obtained results, the sense of belonging (B = 0.07; β = 0.18; P = 0.002) could explain 16% of the variance of the physical health dimension.

The present study aimed to investigate the correlation between the sense of belonging and ERA in elderly adults. An important finding of the research was the appropriate level of the variables of sense of belonging and ERA. Furthermore, the multiple regression results demonstrated that the sense of belonging was positively correlated with all the dimensions of ERA. In a study in this regard, Sarkisian reported the mean score of ERA in three groups of elderlies (American, African-American, and non-American Caucasians), and the results are consistent with the present study (16). Furthermore, Li et al. (17) proposed congruent findings in this regard in an elderly population in China. On the other hand, Kim (9) reached an inconsistent conclusion with the present study, reporting the ERA to be relatively poor in the elderly in Korea.

Several studies have confirmed the significant effects of the expectation regarding positive and negative aging on lifespan and the quest for health care (18-20). Unfortunately, we could not properly address the tendency to longevity in the current research, while as a potential factor, it highlights the need for further investigating ERA.

Some studies have also been focused on the sense of belonging in various populations, such as students (21), older adults (22), and adults (23), and their positive findings in this regard are consistent with the present study. Psychologically, evolutionarily, and biologically, humans are social beings, and many of their needs have been met through interactions with others throughout the biological history of mankind. As such, sense of belonging is an important factor in satisfying human needs, which could justify the consistency of our findings with the similar studies conducted on various populations (11).

Another important finding of the present study was the significant, direct correlation between the sense of belonging and ERA in the elderly. According to the available databases, this was the first study regarding this subject matter. According to our findings, the sense of belonging could predict ERA. The intimate relations of the elderly with their family members could result in healthier aging. Previous findings have also denoted that the appropriate communication of the elderly in social environments (with family or peers) could further engage these individuals socially, thereby reducing their unemployed time, as well as the risk of depression and other mental disorders, which in turn promotes their overall health (24). On the other hand, the higher ERA in the elderly could influence their sense of belonging, thereby forming a positive cycle through which their desire and tendency to have more friends could be strengthened in the process of aging; this has been confirmed in a study conducted by Menkin et al. (25) on the elderly in the United States. Therefore, special attention should be paid to ERA as an important variable; according to the report by Low et al. (26), the promotion of ERA ultimately improves the quality of life of the elderly.

In the present study, the correlations between demographic variables such as age, gender, marital status, education level, economic status, and visiting relatives with ERA were also investigated, and only economic status could predict ERA. Various results have been reported in this regard; in the studies by Sarkisian et al. (16) and Menkin et al. (25), education level has been reported to be significantly correlated with ERA. Evidently, discrepancies could be attributed to the cultural differences (e.g., livelihood and economic issues, quality of life, social welfare) and lifestyle of the elderly in the mentioned studies. In the study by Bowen et al., education level could not predict ERA, and economic status was not significantly correlated with ERA (18).

This was the first study conducted in this regard in Iran, and the findings could lay the groundwork for the further investigations. The present study had some limitations, such as the small sample size, low standard deviation in the age variable, possibility of cultural differences among the elderly that could affect the results and limit generalizability, and lack of similar studies for standard comparison. Therefore, it is suggested that further studies be carried out, and randomized clinical trials (RCTs) be conducted to determine the impact of training on the development of emotional skills on ERA in order to provide accurate results for the community. Due to different living conditions, the Iranian elderly living in other countries are also an appropriate group for the comparison of results obtained within the country.

The results of the present study could be used by researchers to design further investigations. Considering the impact of mental health on the other aspects of geriatric health, the importance of the subject matter, and lack of similar studies, further studies are required in this regard in Iran. In addition, proper training should be provided in this respect to nursing students and geriatric nursing senior students given their direct contact with the elderly population in educational centers and universities. Finally, the elderly and their families should also be educated in order to take a step toward improving their quality of life.

According to the results, the levels of ERA and sense of belonging in the elderly were acceptable. Furthermore, these variables had a direct, significant correlation. Economic situation could also predict ERA. Our findings could be incorporated into the design of comprehensive studies and RCTs to obtained accurate results.

Copyright © 2021, International Journal of Health and Life Sciences. This is an open-access article distributed under the terms of the Creative Commons Attribution-NonCommercial 4.0 International License (http://creativecommons.org/licenses/by-nc/4.0/) which permits copy and redistribute the material just in noncommercial usages, provided the original work is properly cited.
download pdf 134.03 KB Peer Review Comments ( 122.83 KB) Get Permission (article level) Import into EndNote Import into BibTex
Number of Comments: 0