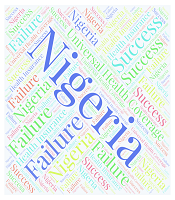 Towards Universal Health Coverage: An Analysis of the Health Insurance Coverage in Nigeria

Achieving universal health coverage requires a Health Insurance Scheme that minimizes out-of-pocket expenditure, guarantees the provision of essential health services, and covers majority of the population. This study examines the NHIS, it's success, failures, efforts so far towards achieving UHC and overall, examines if Nigeria is progressing towards the achievement of universal health coverage.

NHIS has failed in its inclusiveness and covers only about 5% of the general population, mainly from the formal sector while most from the informal sector are excluded. Certain factors such as the inadequate legal framework for a successful scheme, optional enrollment policy, poor funding and lack of political will are responsible for the failure of the NHIS.

Revising the NHIS to cover all segments of the society including remote areas and ensuring the insured have access to health services at all hospitals and health centers across the country is essential in attaining the third sustainable development goal in Nigeria. Also, there is need for intensify public awareness programs to enlighten the people and relevant groups on the positive values of the scheme. The attributes of the scheme should be well publicized in a way that both the formal and informal sector would understand clearly. This might involve the use of all local languages spoken in different parts of the country.

The 17th session of The United Nations General national assembly adopted the SDG in 2015. The vision statement for health as provided by the SDG includes; To promote physical and mental health and well-being, and to extend life expectancy for all, we must achieve universal health coverage and access to quality health care (1). UHC is firmly based on the WHO constitution of 1948 declaring health a fundamental human right and on the Health for All agenda set by the Alma Ata declaration in 1978(2). UHC cuts across all of the health-related sustainable development goals (SDGs) and brings hope of better health and protection for the world’s poorest (1, 2). It is however important to have a clear definition of UHC to establish practical boundaries on what policies can achieve and also create functional means to gauge national strategies and progress (1).

Universal health coverage (UHC) has been difficult to achieve in low and middle-income countries (LMICs) because a large proportion depends on direct out-of-pocket spending that includes fees for consultations and procedures and also over-the-counter payment for medicines. Health and poverty is an entwined duality, languishing at both ends. Those who need quality health the most have the least access because they cannot afford it and those who have little tend to become poor due to catering for their health (3). Uncertainties and potential for financial ruin from ill-health gave birth to the idea of Health insurance. This makes individuals risk-averse and therefore are willing to sacrifice part of their income to purchase the assurance that they will be protected against both catastrophic and impoverishing payments resulting from out of pocket payment for health services. The inclusion of a community-health based insurance model has been disappointing in Nigeria and Sub-Saharan Africa at large (4). The National Health Insurance Scheme (NHIS) was created in May 1999, but NHIS did not become fully operational until 2005. Ever since then, enrollment has been disappointing with only about 5% of the population in all the three NHIS programs (5), namely-formal sector, informal sector and vulnerable groups (pregnant women, inmates, children under 5, retirees, aged).

NHIS as an agency of the Federal Ministry of Health serves as the country's main tool in the fight to achieve UHC. The program covers a beneficiary to outpatient care, pharmaceutical care, diagnosis, maternity care for up to four (4) live births, preventive care, and others. The NHIS records state that more than 6 million Nigerians in the public sector are currently accessing the program (6). A recent development in a bid towards achieving UHC is the launch of the 2018 Nigeria Health Workforce Profile, a joint effort by the FMoh and WHO. The same year also saw the handing over of the Nigeria Health Workforce Registry. This step indicates Nigeria's significant progress in achieving the global strategy for human resources for health: workforce 2030 and further on the road to achieving UHC in the country (7). This commentary attempts at an expository discuss the efforts and shortcomings of the National Health Insurance Scheme so far as regards its mandate to provide access to healthcare for all Nigerians.

Before the birth of NHIS, the general tax-funded method of financing healthcare was in use. With the present arrangement (for NHIS), the employer contributes 10% of the basic salary of the insured while the remaining 5% is paid by the employee. Lately, this has been revised to 3.5% and 1.75% of the basic salary by employers and employees respectively. However, in reality, this formula is not operational, as the Federal Government pays 750 nairas per life insured, quarterly, while the insured has no financial contribution to the scheme (8, 9).

Health Insurance is a social security system that guarantees the provision of needed health services to persons on the payment of token contributions at regular intervals. The predominant health insurance scheme in Nigeria is the NHIS (8).NHIS was established in 1995 to improve access to quality health care services and health status of the citizens, The NHIS was established under Act 35 of 1999 and was launched in Nigerian on October 15, 1997, and was passed into law in May 1999. Though it was passed into law in 1999, it became fully operational in 2005. NHIS was officially launched in June 2005 and was given a presidential mandate to ensure universal coverage of all Nigerians by 2015 (8-11). The NHIS is a public-private partnership between the NHIS, the Health Maintenance Organizations (HMOs), and other health care providers (private and public). The overall objective is to provide universal health coverage and access to adequate and affordable health care, to improve the health status of the citizens. To ensure effective health coverage, the scheme has specific programs for different segments of society (8).

Since its inception, the NHIS has only covered 5% of Nigeria's population most of whom belong to the formal sector. This body also conducts a quality assessment and clinical audits from time to time although there is little evidence that patient satisfaction is increasing or the outcome meets best practice standards. Recently, the NHIS management successfully made a granular presentation of their PROJECT to the minister of health. This project is believed to radically transform operations of NHIS including enrolment, connectivity, and data integrity. At full throttle, it will ensure comprehensive health insurance via process automation, ID card production, and an effective call center management system (12).

Implementing and expanding health insurance schemes in developing economies associated with very large informal sector populations, poor funding, and inefficient fund collection mechanisms can be very difficult. These factors among many others excluded millions from having access to quality health care services in affected nations with resultant and persistent poor health indices and development (8). Furthermore, there is a lack of health care coverage and little equity. Access to healthcare is limited and most Nigerians are unable to pay for health services and health facilities are far from being equally distributed. Of the 23,640 health care facilities available in the country, only 7,300 representing 31% of the facilities were accredited by the NHIS to provide services to registered enrollees. Currently, 4.5 million people representing 3% of Nigeria’s population are covered under the Scheme. This percentage is mainly in the formal sector. The remaining 75% or more, in the informal sector, is largely not covered yet (8, 12).

Some of the factors that have contributed to the failure of NHIS in Nigeria over the years include the inadequate legal framework for a successful scheme, poor implementation of the act, poor government funding, optional enrollment policy, lack of awareness, lack of political will amongst others (11).

3.4. Is Nigeria Progressing Towards the Achievement of UHC?

HH-OOP expenditure on health increased by 37.5 percent in the period 2006 to 2009. Also, only about 5 percent of Nigerians are covered by the pre-payment and risk pooling schemes which the majority are in the formal sectors and a great exclusion of the informal sector and vulnerable population (14).

The above data would be used as a measure of progress towards UHC using the target indicators as proposed by Dr. Francis Nwachukwu, a senior health economist, healthcare financing equity and investment, HSS, DHPR&S, FMOH. Dr. Francis proposed that the following should be used to measure progress towards UHC; THE should be at least 4-5% of GDP, out of pocket spending should not exceed 30 - 40% of THE, Over 90% of the population is covered by prepayment and risk-pooling schemes, and close to 100% coverage of vulnerable population groups with social assistance and safety net programs (15).

According to our statistics report from NHA 2006-2009 (14), the following are the results obtained concerning the target indicators above: THE was 6.7% in 2009( > than the 3 - 4 percent benchmark), less than 5% of the population is covered by prepayment and risk pooling schemes(< 90% benchmark), Out of pocket spending is greater than 60%(> 30 - 40% benchmark) and finally less than 2% coverage of the population with social assistance and safety net programs.

The above analysis shows that Nigeria is only making efforts in the area of its total health expenditure and has failed in meeting up with other important target areas of UHC. Hence, the progress towards UHC in Nigeria is very poor.

This highlights the need for increased investment in the Nigerian healthcare system. Increasing healthcare expenditure has been positively associated with improved indicators of health system sufficiency and such indicators may include neonatal and child mortality and other vital indices of growth. The fragility of the healthcare system may be directly linked to the low level of investment in the health system of the country and since the economic development of a country depends largely on the health of its citizens, increasing budgetary allocation towards healthcare expenditure via the health insurance scheme and other facilities is highly essential in achieving growth in the region (16).

UHC entails access to quality health by everyone everywhere without incurring catastrophic expenditure. It was said by the WHO that as long as there are no social security programs to protect people from using their pocket money and savings to cater for their health, UHC will be difficult to achieve. The majority of those that benefit from the NHIS in Nigeria are in the formal sector leaving the vulnerable and those in the informal sector wide open. For we to say people’s health expenditures are protected is for NHIS to spread its wings across both the formal and informal sectors. A mobile scheme that will provide information and access to health insurance in remote areas is needed. Also, the state-supported health insurance scheme in all states needs to be well implemented. This will help draw more people for enrollment as they’re closer to the various states.

Copyright © 2021, International Journal of Health and Life Sciences. This is an open-access article distributed under the terms of the Creative Commons Attribution-NonCommercial 4.0 International License (http://creativecommons.org/licenses/by-nc/4.0/) which permits copy and redistribute the material just in noncommercial usages, provided the original work is properly cited.
2021-11-24 02:56:13
Nice work, very helpful for my community medicine posting presentation.