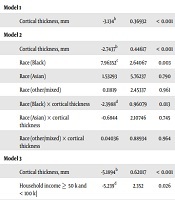 Our findings suggest that although high CT is associated with lower BMI in children, this association varies across racial and SES groups. More research is needed on obesogenic environments’ role in altering the salience of cerebral cortex morphometry as a risk factor for high BMI.

Obesity and high body mass index (BMI) are both unequally distributed across the US society (1). High BMI is more common in Black and low socioeconomic status (SES) than White and high SES children and adults (1). Black children, particularly Black girls, have higher BMI than most other racial groups (1). As high childhood BMI is a predictor of poor health both in childhood and later in adulthood, elimination of racial inequality in childhood BMI is regarded as a strategy to reduce health disparities later in life, particularly in the areas of cancer, heart disease, hypertension, stroke, and metabolic disease (2).

As SES and race are proxies of social and environmental contexts, racial and SES groups may have differing vulnerability to the risk factors of obesity. It is important to explore racial and SES variations in the contributions of various risk and protective factors on obesity development (3). This is because the effects of race and SES are not limited to their direct and main effects, and can have indirect effects by changing the vulnerability to such risk and protective factors (3).

The development of high BMI and obesity also has neurological predictors that reflect who would binge eating and food-seeking behaviors (4). A wide range of brain structures and their characteristics (5, 6), such as cerebral cortex morphometry (7-11), may distinguish obesity-prone from other individuals and may predict future obesity. This is partly because brain structures such as the cerebral cortex regulate the impulse and urge for food-seeking behaviors, which is a known cause of obesity (4). However, less is known about racial and SES differences in the role of brain structures such as the cerebral cortex in predicting children’s BMI (7-11).

Most but not all previous studies have connected low cortical thickness (CT) to high BMI in children and adults (7-11). The heterogeneity in the salience of CT on childhood BMI across populations (7-11) maybe because of SES and race. In other terms, the effect of CT on BMI may vary by race and SES, which would, in part, explain why the literature is mixed on this issue.

This study compared racial and SES groups for the association between CT and childhood BMI. Our first hypothesis was that high CT is associated with low BMI (7-11). Our second hypothesis was that the CT-BMI link is stronger in disadvantaged (Black and low-income) than other (White and high-income) families. In other terms, we expected that the socially disadvantaged groups to show higher vulnerability to CT as a risk factor for high BMI.

A secondary analysis was performed with a cross-sectional design. We used data from the adolescent brain cognitive development (ABCD) study (12, 13).

The ABCD only included children who were between the ages of 9 and 10 years. The ABCD children were enrolled from multiple cities across the states. Children were recruited into the ABCD study from 21 sites. The primary strategy for sampling in the ABCD study was sampling through school systems (14). Participants were enrolled regardless of their race, ethnicity, BMI, or physical or psychiatry conditions.

Using resting-state structural MRI, CT was defined as the mean thickness of the whole cerebral cortex. This is treated as a continuous measure (mm). A full description of structural MRI in the ABCD study is available here (13). In the ABCD study, brain morphometry, including CT, is measured using harmonized 3-tesla MRI devices that are compatible across study sites: Siemens Prisma, General Electric 750, and Phillips. The imaging protocol includes 3D T1- and 3D T2 weighted images and diffusion weighted images for brain structure measures. ABCD has calculated mean CT and we used the variable in the Data Analysis and Exploration Portal (DEAP) system.

The children’s BMI at baseline was calculated based on participants’ measured height and weight. BMI was treated as a continuous measure. Race, a self-identified variable, was a categorical variable: Black, Asian, Other/mixed race, and White. Ethnicity, a self-identified variable, was 1 for Hispanics and 0 for non-Hispanics. Parents reported their years of schooling. This variable was operationalized as a nominal variable: less than high school, high school, some college, college graduate, and graduate studies. Family income was a three-level categorical variable. Parents reported the total combined family income in the past 12 months. Responses were 1 = less than $50,000; 2 = $50,000- $100,000; and 3) $100,000 or more.

Data Analysis and Exploration Portal, which operates based on the R statistical package, was applied for data analysis. The DEAP is available at the NIH NDA. Mean (standard deviation; SD) and frequency (relative frequency; %) of all variables were described overall and by race and family income. We also used ANOVA and chi-square tests for bivariate analysis to compare the study variables across racial and income groups. For multivariable modeling, we ran mixed-effects regression models. In our model, the CT was the predictor, BMI was the outcome, and demographic factors, race, ethnicity, and family structure were the covariates. Race and income levels were the moderators. All models were performed in the pooled sample. Our 1st model was without the interactions; our 2nd model was with interaction terms between race and CT. Our 3rd model was with an interaction term between household income and CT. Unstandardized coefficient (b), SE, and P value were reported for our model. P equal or less 0.05 was significant.

The ABCD study protocol received Institutional Review Board (IRB) approval from several institutions, including but not limited to the University of California, San Diego (UCSD). All participating children provided assent. All participating parents signed informed consent (15). Our study was exempt from a full IRB review.

Table 2. Additive and Multiplicative Effects of Cortical Thickness Overall and by Race and Socioeconomic Statusa

We found that high CT is associated with lower BMI among 9 - 10 years old American children. However, according to our study, this association was stronger for Black and low-income than White and high-income children.

The effect of neural circuits (e.g., cue-triggered motivation) on obesity may depend on the degree by which one’s environment promotes obesity (e.g., increased access to ‘junk-food’ and scarcity of healthy diet choices) (23). Chronic and repeated exposure to high-calorie diets (e.g., fast food) may weaken the role of brain mechanisms that should down-regulate food cues (e.g., generated by striatum) (24). That is, the cerebral cortex may interact with environmental and predisposition factors. As a result, neurobehavioral risk factors may show a larger effect on BMI in the environments that are regarded as highly obesogenic. In the presence of buffers and protective factors, healthy food options and diet may reduce the risk of obesity due to risk factors (e.g., low CT). White and high-income families may flatten the risk of obesity due to thin CT by enhancing the food environment and habits. In contrast, Black and low-income families live in environments that may facilitate children's risk of obesity. In other terms, whether the individual becomes susceptible to obesity is not merely a function of the brain or environment but their intersections (25).

More research is needed on differences in vulnerability to neurobehavioral risk factors of obesity across social groups. The cerebral cortex and many other parts of the brain, such as the striatum, are involved in food-seeking behaviors and alcohol (24). The family’s food environment and dietary habits may modulate the effect of or brain on food cue-induced behaviors. Future research should investigate the interaction between environment and a wide range of brain structures and functions such as the prefrontal cortex, the striatum, and thalamus in regulating food-seeking behaviors (26-30).

This study had a few limitations. First, it used a cross-sectional design. As such, the results cannot suggest a causal association. Instead, we should only interpret the link between CT and BMI as a correlation. Second, this study only described race and SES differences in the association between CT and BMI. Research should explore contextual and behavioral mechanisms that may explain the observed differences in this study. Third, our study did not control for some potentially important confounders, such as physical health, psychopathologies, family’s eating habits, and environmental risk factors of obesity. Finally, despite the sample was national, the results are not generalizable to the US population.

In this cross-sectional national study, low CT is associated with high BMI among 9 - 10 years old children. However, this association is unequal across racial and SES groups of American children. The observed heterogeneity of CT and BMI association may be because low-SES and Black people are more likely to live in obesogenic environments. More research is needed on how we can reduce the increased vulnerability of Black and low-income children to obesity risk factors.

Data used in the preparation of this article were obtained from the Adolescent Brain Cognitive Development (ABCD) Study (https://abcdstudy.org), held in the NIMH Data Archive (NDA). This is a multisite, longitudinal study designed to recruit more than 10,000 youth age 9-10 and follow them over 10 years into early adulthood. The ABCD Study is supported by the National Institutes of Health Grants [U01DA041022, U01DA041028, U01DA041048, U01DA041089, U01DA041106, U01DA041117, U01DA041120, U01DA041134, U01DA041148, U01DA041156, U01DA041174, U24DA041123, U24DA041147]. A full list of supporters is available at https://abcdstudy.org/nih-collaborators. A listing of participating sites and a complete listing of the study investigators can be found at https://abcdstudy.org/principal-investigators.html. ABCD consortium investigators designed and implemented the study and/or provided data but did not necessarily participate in analysis or writing of this report. This manuscript reflects the views of the authors and may not reflect the opinions or views of the NIH or ABCD consortium investigators. The ABCD data repository grows and changes over time. The ABCD data used in this report came from [NIMH Data Archive Digital Object Identifier (http://dx.doi.org/10.15154/1504041)].

Copyright © 2020, International Journal of Health and Life Sciences. This is an open-access article distributed under the terms of the Creative Commons Attribution-NonCommercial 4.0 International License (http://creativecommons.org/licenses/by-nc/4.0/) which permits copy and redistribute the material just in noncommercial usages, provided the original work is properly cited.
download pdf 114.02 KB Peer Review Comments ( 105.85 KB) Get Permission (article level) Import into EndNote Import into BibTex
Number of Comments: 0