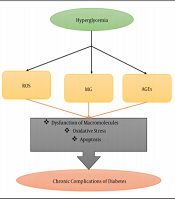 Diabetes mellitus is one of the most common endocrine diseases. Studying the plants and effective compounds from plant extracts to prevent diabetes has become recently important.

The results showed that administration of D. sophia extract to diabetic rats reduces the blood glucose, biochemical enzymes level, triglycerides, total cholesterol, and LDL cholesterol. There was no significant difference in cholesterol levels. In the rats which received the extract, the amount of albumin decreased and the amount of urea and creatinine increased significantly.

Based on the research findings, it can be concluded that this extract can be useful in preventing diabetes by reducing blood glucose, changing biochemical enzyme level, fat profile, and serological parameters; as D. sophia hydroalcoholic extract contains various compounds.

Diabetes mellitus and its complications are characterized by impaired glucose metabolism (1). Glucose metabolism is strongly regulated by insulin, and abnormal glucose metabolism can lead to problems such as insulin resistance or insulin deficiency (2). In type I diabetes, the absolute disorder or lack of insulin is due to the destruction of the β Cells of the islets of Langerhans (3). But in type II diabetes, the problem of insulin resistance is more common in the early stages of the disease (4, 5). Chronic hyperglycemia augments reactive oxygen species (ROS), advanced glycation end products (AGEs), and methylglyoxal (MG) (6). These reactive species cause macromolecule dysfunction, oxidative stress, and apoptosis (7). Eventually, they may develop complications such as retinal, renal, neurological, and cardiovascular diseases (Figure 1) (8). 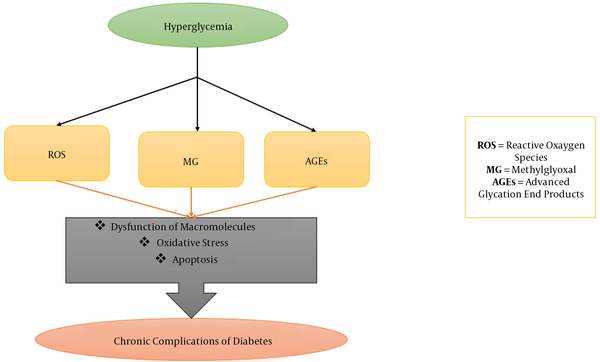 The Descurainia sophia (L.) Webb ex Prantl (D. sophia) belongs to the Brassicaceae family presented in The Plant List (http://www.theplantlist.org/). This plant is the most extensive traditional pharmacopeia of Iranian traditional medicine and is famous among folk medicine practitioners. In Iranian traditional medicine, D. sophia is used as an antipyretic, antipruritic, purgative, helminthic, aphrodisiac, appetizer, digestive tonic, cardiotonic, antidiabetic, astringent, and expectorant (9-12). It was also used in ancient times to treat dysentery and is referred to by herbalists as "The Wisdom of Surgeons" in the botanical list (http://www.botanical.com). This plant grows from early May to mid-June. After drying the plant, its seeds may be used in a variety of syrups, beverages, and other parts of the plant (leaves and flowers) can also be used as additives (13, 14). Numerous medicinal and therapeutic properties are reported for D. sophia, which are due to its various phenolic and flavonoid compounds such as quercetin, kaempferol, and isoquercetin. The D. sophia has antioxidant, free radical scavenging, anti-inflammatory, analgesic, and antipyretic properties (15, 16). It has also been reported to have anti-cancer activity, mainly due to the suppression and inhibition of cancer cell growth (17).

Due to the side effects and the high cost of chemical compounds, some researches are conducted on medicinal plants and their natural compounds. It is expected that D. sophia have anti-diabetic properties due to the presence of various phenolic and flavonoid compounds.

In this study, we investigated the effect of hydroalcoholic extract of D. sophia on blood glucose, biochemistry parameters, fat profile, and serology profile in diabetic male rats.

D. sophia samples were collected and identified (Table 1). After being approved by a botanist, it was dried away from sunlight and then turned into powder using an electric grinder (18). To prepare the hydroalcoholic extract, 40 g of D. sophia powder was placed in 180 ml of ethanol for one day. Then, to increase its concentration, a rotary evaporator (German model Heidolph LABOROTA 4000 WB/G3) was used at 65°C.

7-week-old male Wistar outbred rats, approximately 180 - 210g and purchased from Royan Research Institute were used in this study. These rats were divided into seven groups (Table 2) and kept in the animal room for 12 hours of darkness and 12 hours of light at 22 ± 2°C. The rats were given commercially prepared foods (rat food) and sufficient water. Ethical considerations were observed when working with the experimental rats.

Table 2. Rats' Classification a, b

a Rats were classified into 7 groups. Group (I) was perfectly healthy and received only water and food.

For diabetic rats, streptozotocin (STZ) was injected intraperitoneally in a dose of 70 mg/kg body weight. To ensure diabetes in the rats, blood glucose was measured by a glucometer after three days and the criterion for diabetes was blood glucose higher than 250 mg/dL, and the rats with blood glucose higher than 250 mg/dL were selected as diabetic rats. After induction of diabetes in the rats, groups 2, 3, 5, and 6 were given hydroalcoholic extract of D. sophia by gavage in doses of 200 and 400 mg/kg body weight. Blood glucose in rats was measured and recorded regularly each week. Three weeks later, at the end of the experiment, chloroform was used as an anesthetic agent for rats. Finally, after anesthesia, blood samples were taken from rats and ethylenediaminetetraacetic acid (EDTA) was used as an anticoagulant. Then, centrifugation was performed on the samples, and blood serum was isolated and prepared for measuring indicators and performing biochemical tests.

SigmaPlot 12 software was used to analyze the data. Data were reported using mean ± SD and the parameters were compared through One-way ANOVA in SPSS Statistics 22 at the significance level of P < 0.05.

The importance of herbs in the prevention and treatment of chronic diabetes is proved. When these herbs are consumed as an extract taken from different parts of a plant, their therapeutic role is enhanced. The plant extracts can play different therapeutic roles in various diseases (19, 20). The results of this study show that the hydroalcoholic extract of D. sophia significantly reduces blood glucose. On the first day, the blood glucose level was almost the same in all groups, but after STZ injection on the third day, blood glucose increased to more than 250 mg/dL, and after three weeks, blood glucose levels decreased by 231 and 215 mg/dL in the 6th and 7th groups, respectively, which was significant compared to the diabetic group (Figure 2). In the 5th group, the blood glucose reduced significantly to 205 mg/dL. This finding was expected because glibenclamide is pure, but there is a mixture of compounds in the plant extract, and perhaps the combined effect of these compounds can reduce blood glucose levels. It can be seen that in the 2nd and 3rd groups, which were not diabetic, the blood glucose was reduced to 102 and 101 mg/dL, respectively, which was not significantly different from the control group (P = 0.15), indicating that the administration of the extract to healthy rats had no effects on their glucose level. In diabetic rats, reactive oxygen species were augmented as a result of free fatty acid (FFA) which cause oxidative stress. This problem causes the body's cells to become insulin resistant and reduces insulin production (21, 22). It has been observed that plant extracts cause tissues such as adipose tissue, muscles, and liver to receive higher amounts of glucose, a mechanism that differs from the effect of insulin (23, 24). In the present study, the hydroalcoholic extract of D. sophia also affected the glucose uptake rate by these tissues.

The destruction of hepatic stellate cells in the body can increase the release of ALP, AST, and ALT enzymes in the blood (25). It was shown that different doses of Adenia cissampeloides extract significantly reduced the levels of ALP, AST, and ALT enzymes (26). In our study, the amount of these enzymes also changed. ALP enzyme level ranged from 152.19 to 173.17 mg/dL in the control, the second, and the third groups, but in the diabetic group, its level (421.19 mg/dL) increased dramatically due to STZ injection, although this amount reached 398.7 and 335.18 mg/dL in the sixth and seventh groups respectively (Figure 3). Such a decrease in ALP enzyme level was not significant (P = 0.11) compared to that of the diabetic group, so the extract administration had little effect on reducing the amount of ALP enzyme. Both AST and ALT enzymes in the sixth and seventh groups decreased by administering different concentrations of the extract, which was significant compared to the diabetic group for both types of enzymes. The decrease in both enzymes can be attributed to the presence of phenolic and flavonoid compounds.

Content of alkaline phosphatase, aspartate aminotransferase, and alanine aminotransferase enzymes in the studied groups (* there is a significant difference with other groups; Abbreviations: C, control; D, diabetic; G, glibenclamide).

Fat profile levels can also change. Administration of D. sophia extract in doses of 200 and 400 mg/kg body weight can reduce total cholesterol, LDL cholesterol, and triglycerides. In a dose of 400 mg/kg body weight, the levels of total cholesterol, LDL cholesterol, and triglycerides were even lower than those of glybenclamide (Table 3). The insulin hormone secreted by the β cells can affect the enzymes of the triglyceride pathway such as the lipoprotein lipase (LPL) produced by adipose tissue and change the amount of fat profile (27, 28). Therefore, it is possible that the compounds of the extract may affect these enzymes, but the exact knowledge of these mechanisms needs further investigation.

Table 3. Fat Profile Analyzed in Male Rats a, b

b Different capital letters (A to C) in each column indicate a significant difference (P < 0.05).

The amount of albumin in the diabetic group was 3.11 mg/dL, which increased to 3.77 and 3.65 mg/dL, in the groups that received different concentrations of the extract (Table 4). Decreased albumin levels in the diabetic group can be explained by the fact that one of the complications of diabetes is diabetic nephropathy, due to kidney cell damage and the entry of some protein and albumin in the urine, and therefore, albumin reduction is reasonable (P < 0.05) (29). Diabetic nephropathy decreases albumin in diabetic specimens, and due to the damage to the kidney cells and the entry of some protein and albumin in the urine, such a decrease is reasonable. One study found that albumin production was increased in STZ-diabetic rats treated with Strychnos henningsii extract (30). In this study, the amount of albumin in rats receiving the extract was increased. According to the results, it is observed that the level of urea in diabetic rats with STZ was high (75.51 mg/dL). However, this amount was reduced by administering the extract to diabetic rats in 60.33 and 62.14 mg/dL. This decrease probably indicates that the D. sophia extract was diuretic. Therefore, more urea is excreted. Studies have shown that urea and creatinine levels are high in STZ-diabetic rats due to the effect of STZ on renal cell damage (31, 32). Therefore, high levels of urea and creatinine in diabetic rats are consistent with previous studies.

b Different capital letters (A to C) in each column indicate a significant difference (P < 0.05).

The authors wish to thank the University of Isfahan for providing financial support.

Copyright © 2021, International Journal of Health and Life Sciences. This is an open-access article distributed under the terms of the Creative Commons Attribution-NonCommercial 4.0 International License (http://creativecommons.org/licenses/by-nc/4.0/) which permits copy and redistribute the material just in noncommercial usages, provided the original work is properly cited.
download pdf 363.12 KB Peer Review Comments ( 170.61 KB) Get Permission (article level) Import into EndNote Import into BibTex
Number of Comments: 0