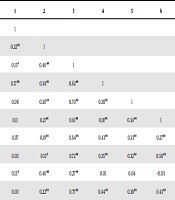 Social interactions require social cognition. Social cognition and its shortcomings could be assessed by questionnaires and interviews.

The present study aimed to examine the psychometric properties of the Persian versions of the Observable Social Cognition Rating scale (OSCARS) in students.

This correlational study was conducted on 250 male and female students at the high schools of Dezfoul, Iran during 2019 - 2020. The participants were selected via multistage random sampling. The reliability, congruent validity, and concurrent validity of the Persian version of the OSCARS were evaluated using the teacher’s form of the OSCARS and the cognitive abilities questionnaire. The validity of the OSCARS was measured by confirmatory factor analysis, and its congruent validity and reliability were measured using the Cronbach’s alpha and split-half method.

The Cronbach’s alpha value of the entire scale, teacher’s form, and cognitive abilities questionnaire was 0.65, 0.60, and 0.85, respectively. The split-half coefficient for the entire scale was estimated at 0.60, and the correlation between the OSCARS and the teacher’s form was 0.35. Moreover, the correlation between the OSCARS and cognitive abilities questionnaire with the social cognition subscale was 0.15 and 0.13, respectively. The results of confirmatory factor analysis indicated the excellent fitness of the OSCARS structure (RMSEA = 0.02).

According to the results, the Persian version of the OSCARS has good reliability and validity.

Social cognition is defined as the social performances based on social foundations such as understanding, interpretation, and response to the goals, interests, and behaviors of others (1). In other words, social cognition is the ability to recognize self and others and understand their mental state based on their tone of voice and facial/bodily appearances, as well as the ability to interpret their mental state by using the rules and knowledge of social affairs to interact with others and manage one’s emotions in interpersonal relationships (2-4).

The present study aimed to assess the validity and reliability of the Persian version of the OSCARS in Iran.

This was a descriptive-correlational study.

The sample population included the male and female students of the high schools in Dezful, Iran during 2019 - 2020. By using Cochran’s formula, 250 students aged 14 - 18 years (mean age: 15.88 ± 0.93 years) were selected via multistage random sampling. The current research was conducted after obtaining the required permit from the original developer of the OSCARS for translation into Persian, consultation with several psychology professors, and performing a pretest on some students to determine its readability. The students were provided with the required information about the objectives of the study and their participation before completing the questionnaire. At the next stage, the students were asked to state their agreement on a seven-point Likert scale. Each item of the questionnaire was scored within the range of 1 - 7.

After obtaining approval from the ethics committee of Shahid Chamran University of Ahvaz, data collection work began. All the participants completed the OSCARS and cognitive abilities questionnaire, which was used to examine congruent validity. Moreover, teachers completed the teacher’s report form for 56 students simultaneously and randomly. In order to measure validity, confirmatory factor analysis and congruent validity were used. The reliability of the tool was also measured using the Cronbach’s alpha and split-half method (Spearman-Brown and Guttman).

The OSCARS has eight items to evaluate social cognition, and each item has one question, which targets one of the domains of social cognition. After each question, a behavioral example is presented to show a deficiency in that domain. Subsets of social cognition include the theory of mind, emotional perception, cognitive rigidity, jumping to conclusions, and attritional style. The participants would score their cognitive ability on a seven-point scale, and higher scores showed deficient social cognition.

The validity of the scale was set within the range of 0.50 - 0.70 using the retest method. In the study by Silberstein et al. (13), the internal consistency of the OSCARS was reported to be 0.80. The validity and reliability of this tool were first measured in the present study in Iran. Accordingly, the reliability of the OSCARS was estimated at 0.60 for the self-report version and 0.65 for the teacher’s version.

This questionnaire has been developed by Nejati to measure cognitive abilities (14). The tool consists of 30 items and seven micro-components of active memory, self-control and selective attention, decision-making, planning, stable attention, social cognition, and flexibility, which indicate that daily life situations require cognitive abilities. The items in the cognitive abilities questionnaire are scored based on a five-point Likert scale (never = 1, always = 5). In the study by Nejati (14), the reliability of this questionnaire was reported to be 0.83 based on the Cronbach’s alpha. This tool was used to examine the congruent validity of the OSCARS in the current research, and its validity was estimated at 0.85 based on the Cronbach’s alpha.

Mean and Standard Deviation (SD) of scores of students and teachers in the Observable Social Cognition Rating Scale is presented in Table 1.

Table 1 shows the mean scores of the students and teachers in the OSCARS. Accordingly, the mean total score of the students and teachers in the OSCARS was 26.04 ± 3.80 and 32.35 ± 2.05, respectively. In addition, the mean score of their cognitive abilities was 68.45 and 5.61, respectively. Confirmatory factor analysis was used to examine the validity of the OSCARS, and the obtained data from the questionnaire were analyzed using the AMOS software version 22. Table 2 shows the factorial load of the items of the OSCARS divided into two forms (self-report and teacher’s report).

In the current research, the RMSEA value was estimated at 0.02, which indicated that the data had an appropriate fit. The other indices of model fit also showed the excellent fit of the model (GFI = 0.96, CFI = 0.99, IFI = 0.99). Moreover, the results of confirmatory factor analysis regarding the teacher’s reports showed that all the factorial loads were higher than 0.3. However, indices of fit did not show a good fit, which could be due to the small sample size (n = 56). Pullman (15) states that RMSEA is not a good index for evaluating the fit of the model in the cases where the sample size is smaller than 150 since in this form, the value of this index is very high, and the value of other indices should be considered as well. Therefore, it is recommended that further investigation be conducted on appropriate sample sizes.

Table 4. The Correlation Coefficient for Scores of Students for the OSCARS and Cognitive Abilities Questionnairea

Two questions examined the validity of the two forms (self-report and teacher’s report) in Table 5.

Table 5. Correlation Results of Single Questions with the Whole Test

Table 4 also shows the correlation of the questions with the two forms of the questionnaire (self-report and teacher’s report). In order to assess the validity of the OSCARS, we used the Cronbach’s alpha split-half method (Spearman-Brown and Guttmann), and the data of the entire samples (n = 250) were analyzed (Table 6).

According to the information in Table 6, the reliability coefficient of the OSCARS was estimated at 0.65, 0.60, and 0.65 based on the Cronbach’s alpha, Spearman-Brown split-half method, and Guttmann split-half method, respectively. These coefficients indicated the relatively good reliability. The alpha coefficient value was also obtained for the teacher’s report form, with the cognition abilities estimated at 0.60 and 0.85, respectively.

The present study aimed to examine the validity and reliability of the OSCARS in a sample of students. According to the obtained results, the OSCARS is an appropriate tool for the evaluation of social cognition in adolescents. Furthermore, the results of confirmatory factor analysis regarding the validity of the questionnaire revealed that all the items were maintained given the desirability of the factorial loads. The GFI of the model was also considered desirable.

The significant correlations between the OSCARS, teacher’s report form, and the cognitive abilities questionnaire confirmed the concurrent validity of this scale. We also applied the Cronbach’s alpha, Spearman-Brown split-half method, and Guttmann split-half method to evaluate the reliability of the OSCARS. Our findings in this regard are consistent with the studies by Healey et al. (11), Silberstein et al. (13), and Halverson et al. (12).

Several international studies have also examined the validity of the OSCARS, proposing consistent results with our findings. For instance, Healey et al. (11) measured the congruent validity of the OSCARS, reporting that this tool has high internal consistency and retest validity. Moreover, their findings indicated that the OSCARS could be used as a diagnostic tool for patients with social cognition deficiency. Halverson et al. (12) also proposed similar results and confirmed the congruent validity, external validity, and predictive validity of the OSCARS. Furthermore, this tool has been shown to be an effective diagnostic tool at the early stages of treatment.

In general, the results of the present study indicated that the Persian version of the OSCARS has desirable reliability and validity and could be an efficient tool for screening and early diagnosis in identifying individuals with cognitive problems at early stages and taking actions for treatment since it is believed that these characteristics are more responsive to treatment at the early stages of life.

Our study had some limitations. First, the sample population was limited to the age range of 14-18 years, and the findings cannot be generalized to younger children or children in other communities. Therefore, it is recommended that further investigations in this regard be performed on larger sample sizes, and interviews be conducted while completing the questionnaire. Second, we used a questionnaire to determine the background, and some of the participants refused to answer correctly or gave unreal answers to the questions in this respect. It is suggested that interviews and questionnaires be used simultaneously in further research. Consultants and physicians could use the OSCARS as a practical indicator for the identification of high-risk individuals as well.

According to the results, the OSCARS could be used as a reliable questionnaire for the measurement of social cognition in both the self-report and teacher’s report versions and in clinical and non-clinical communities.

The authors are grateful to all the participants for their valuable cooperation in this study. This work was in part supported by the Shahid Chamran University of Ahvaz (Department of Psychology).

Copyright © 2021, International Journal of Health and Life Sciences. This is an open-access article distributed under the terms of the Creative Commons Attribution-NonCommercial 4.0 International License (http://creativecommons.org/licenses/by-nc/4.0/) which permits copy and redistribute the material just in noncommercial usages, provided the original work is properly cited.
download pdf 127.91 KB Peer Review Comments ( 125.97 KB) Get Permission (article level) Import into EndNote Import into BibTex
Number of Comments: 0