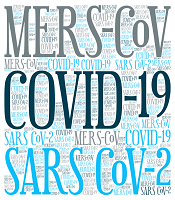 Potential Roles of Arthropods for Transmission of Coronavirus (COVID-19)

Since the emergence of the new coronavirus (COVID-19) in December 2019 in Wuhan, China, this viral disease pathogenesis and epidemiology have been under investigation. The researchers surveyed the diversity of coronaviruses, including SARS Co-V, MERS-CoV, and SARS CoV-2 (1). Following the worldwide distribution, increasing patients confirmed positive, the high mortality rate due to acute pneumonia or other complications, this novel coronavirus has been of great international concern based on WHO announcement. At present, it is evident that COVID-19 is transmitted through respiratory droplets and close contact and possibly the other routes.

If the transmission routes can be identified, it will be controlled more effectively. For instance, the potential roles of various arthropod species, including ticks, mites, mosquitoes, flies, and cockroaches, could be of high consideration. Arthropod-borne diseases such as Crimean-Congo hemorrhagic fever (CCHF), tick-borne encephalitis virus (TBEV), Powassan virus (POWV), Omsk hemorrhagic fever virus, yellow fever, and dengue fever are caused due to transmission of Arboviruses either from reservoir host or infected person to human. Indeed, these viral diseases are a considerable fraction of the infectious disease burden in the world. Thus, it could be mentioned that there has been a global threat of emergence or re-emergence of Vector-Borne Diseases caused by arboviruses (1, 2).

Aedes aegypti has been responsible for the transmission of yellow fever in the urban areas in the Americas and continued to be a vector species following the emergence of several new Arboviral diseases including dengue virus (DENV), chikungunya virus (CHIKV), and Zika virus in the New World (3).

Recently, another Aedes species, Aedes albopictus, has been highly significant because of the ongoing invasion of this species into various geographical regions and creating significant threats due to being a capable biological vector for various arboviruses (4).

As in the case of arboviral diseases, the virus is transmitted by arthropods, including ticks and mosquitoes, to amplifying reservoir hosts that develop a sufficient viremia to infect arthropods and humans. Since the virus propagates in arthropods, it is apparent that biological transmission from infection source to human host will occur (5).

Vector biology and arbovirology information revealed the virus-vector interactions as a requirement sustaining the transmission cycle of arboviruses. For instance, following infection of a mosquito species with a virus, the transcription of mosquito genes and subsequently increased protein abundance in salivary glands could be affected and virtually leads to the saliva virus infection (6).

More research on the interaction between pathogenic viruses and human hosts and potential arthropod vectors could be useful for preventive strategies for viral diseases.

On the other hand, it can be suggested that migrated viremia CoV infected humans to the new geographic regions, especially with the high seasonal activity of arthropods such as mosquitoes, could help prevention of a relationship between virus, vector, and the human host. Some information on the time-course of viremia relevant to coronaviruses is available.

An attempt was made by Chen et al. to investigate the time course of SARS-CoV viremia in 135 SARS patients. They showed that viremia began one week after the emergence of the symptoms and lasted decreasingly until one month. However, at the peak of viremia, the virus was detectable in 75% of blood samples from SARS infected patients (7).

Simultaneously, some viral diseases such as hepatitis A and E are transmitted through the fecal-oral route. Nowadays, there is a question; are coronaviruses capable of being transmitted through the fecal-oral route? According to some available evidence, the COVID-19 virus has been reported in patients' feces (8). Wu et al. detected the COVID-19 virus in 55% of fecal samples using RT-PCR in China (9). Hence, the omnivorous insects, including cockroaches and house flies which contact with human's feces, could be able to transmit the COVID-19 virus as the mechanical vectors (9).

However, it seems that human feces to be an important possible source of COVID-19. On the other hand, cockroaches and houseflies are capable of transmitting pathogens including bacteria, fungi, viruses, protozoan cysts, and eggs of parasitic worms by their legs, mouthparts, body hair, feces, and vomit. The roles of these insects as mechanical vectors of the COVID-19 virus through the oral-fecal route need further studies.

Copyright © 2021, International Journal of Health and Life Sciences. This is an open-access article distributed under the terms of the Creative Commons Attribution-NonCommercial 4.0 International License (http://creativecommons.org/licenses/by-nc/4.0/) which permits copy and redistribute the material just in noncommercial usages, provided the original work is properly cited.
download pdf 86.94 KB Peer Review Comments ( 99.77 KB) Get Permission (article level) Import into EndNote Import into BibTex
Number of Comments: 0