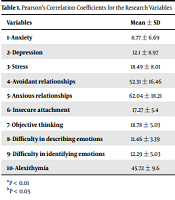 Individuals with alexithymia have a limited ability to adapt to stressful situations, leading to high levels of psychological distress, anxiety, and stress symptoms.

This study aimed to investigate the role of insecure attachment in psychological distress within Islamic Azad Universities of Tehran in 2020 by mediating alexithymia.

The structural equation modeling (SEM) was used as the primary research method in this study. The study population included all university students between 20- and 40-years old studying at the Islamic Azad Universities of Tehran in the 2019 - 20 academic year. A total of 305 students was selected as samples using the multi-stage cluster sampling method. Several research tools were used, including the Depression Anxiety Stress Scale, the Experiences in Close Relationships-Revised (ECR-R), and the Toronto Alexithymia Scale (TAS-20). The data were analyzed using a correlation matrix in SPSS statistical software Version 24 and structural equation modeling (SEM) in Amos-26.

Results revealed in the correlation between insecure attachment and states of psychological distress mediated by the alexithymia. Given the importance of attachment style and alexithymia in the development of anxiety, stress, and depression, therapists are recommended to take these variables into account.

Attachment style is one of the factors contributing to the prevalence or exacerbation of stress, anxiety, and depression symptoms (5). Attachment consists of a long-lasting emotional bond between the growing child and a caregiver that affects social development and psychological performance throughout life (6). Studies have confirmed that early attachment relationships sustain in adulthood and play an important role in an individual's emotional dysfunctions and performance and their intimate relationships throughout life (6). Bowlby suggests that infants respond based on their attachment style to separation from and return to their mother, including secure attachment, insecure-avoidant attachment, and anxious/ambivalent attachment (7). Insecure attachment style may lead to a lack of security in interpersonal relationships and problems in identifying reality and controlling internal states and emotions, which provide the grounds for unhealthy behavior patterns, anxiety, depression, and stress (8). Bonacquisti et al. (3) reported that insecure attachment in adults is negatively correlated to mental health and related areas, including feelings of vitality, cheerfulness, motivation, freshness, and hope (3). Spruit et al. (9) found a significant positive correlation among ambivalent attachment style and depression, anxiety, and stress in children and adolescents (9).

Alexithymia can play the mediating role in the relation of insecure attachment style with anxiety, depression, and stress given the significance role of emotions in perceiving self and others' feelings (10) and the relationship of a child with his/her parents in forming and recognizing emotions in the early years of life (11). Multifaceted alexithymia includes difficulties identifying feelings (DIF), emotions, and bodily stimuli related to emotional arousal, describing feelings (DDF) to others, and limited visualization. Externally oriented thinking (EOT) and pragmatic, reality-oriented, or objective thinking are the other symptoms (12). Individuals with alexithymia exaggerate normal physiological arousal, misinterpret the somatic signs of emotional arousal, and express emotional helplessness through somatic complaints (13). Preece et al. (14) demonstrated that individuals with alexithymia have difficulty adopting to stressful situations, leading to high levels of psychological distress, anxiety, and stress symptoms. The researchers sought to reduce the stress load experienced by alexithymia as a defense mechanism to become a stable personality trait (14). Basharpour et al. (15) indicated that mindfulness and alexithymia could significantly predict depression and anxiety in female victims of spousal violence (15).

The present study aimed to explain the causal model of psychological distress in university students based on insecure attachment mediated by alexithymia.

Structural equation modeling (SEM) was the primary analysis method in this study. The statistical population comprised all university students between 20- and 40-years old studying at Islamic Azad Universities of Tehran in 2019 - 20. According to Kline (16), at least 20 samples are needed for each parameter. Given the number of parameters in this study (10 parameters), a 200-participant sample was required, and larger sample size was considered to prevent possible loss. Multi-stage cluster sampling was used to select three universities among all Islamic Azad universities in Tehran. Two faculties from each university, two classes from each faculty, and 30 students from each class were selected. The primary sample consisted of 360 participants who completed the questionnaires, among which 55 questionnaires were incomplete and excluded from the study (final sample = 305 students). Given the COVID-19 outbreak, in-person completion of the questionnaires was impossible. Therefore, an electronic questionnaire was sent to students with general explanations about research objectives and how to complete the questionnaires. The inclusion criteria were being a student at Islamic Azad Universities in Tehran, ranging in age from 20 to 40, being aware of research objectives, and signing informed consent to participate in the study. The exclusion criteria included failure to answer over 30% of questions and the use of a specific answering pattern, such as answering even questions or choosing the same option in successive questions, which were identified by reviewing all questionnaires.

The Depression Anxiety Stress Scale, developed by Lovibond, was designed to measure the emotional states of depression, anxiety, and stress with 42 items (14 items in each subscale). The depression subscale assesses dysphoria, low self-esteem, hopelessness, devaluation of life, self-deprecation, lack of interest/involvement, anhedonia, and inertia. Autonomic arousal, situational anxiety, and fear are assessed in the anxiety subscale. Under the stress subscale, difficulty relaxing, nervous arousal, being easily upset/agitated, irritable/over-reactive, and restlessness are examined. Participants were asked to rate the severity (frequency) of each symptom in the last week based on a 4-point scale from 0 to 3. The depression, anxiety, and stress scores range from 0 to 42 (17). Sahebi et al. (18) reported Cronbach’s alpha coefficient as much as 0.81 for the scale, which is calculated as much as 0.79 in the present study.

The Experiences in Close Relationships-Revised (ECR-R) questionnaire was developed by Brennan et al. to measure the attachment styles of adults. This 36-item questionnaire consists of two 18-item dimensions for determining anxious attachment (i.e., the degree to which individuals are secure or insecure about the accessibility and accountability of their partner(s)) and avoidant attachment (the degree to which a person feels discomfort approaching others). The ECR-R is rated on a 7-point Likert scale from 1 to 7. A score for anxious attachment or avoidant attachment can range between 18 and 126 (19). Shokrkon et al. (20) reported Cronbach’s alpha coefficient as much as 0.87 for the questionnaire, while the Cronbach's alpha coefficient of the questionnaire in the present study was 0.84.

The Toronto Alexithymia Scale (TAS-20), developed by Bagby et al. cited in Parker et al., is a 20-item inventory with three subscales, including difficulty in identifying (7 items) and communicating feelings (5 items), as well as externally-oriented thinking (8 items). The scale runs from strongly disagree =1 to strongly agree =5, on a 5-point Likert scale. The total score is obtained from the sum of three subscales for alexithymia, ranging from 20 to 100 (21). Besharat (22) reported Cronbach’s alpha coefficient as much as 0.85 for the scale, the coefficient was 0.84 in the present study.

The Data were analyzed using descriptive statistics, such as mean, standard deviation, and correlation matrix in SPSS 24 and SEM in Amos 26.

The path analysis was used to investigate the mediating role of alexithymia in the correlation between psychological distress and insecure attachment. The researchers considered the chi-square to degrees of freedom ratio < 3, goodness of fit index (GFI), comparative fit index (CFI), and adjusted goodness of fit index (AGFI) ≥ 0.90, the root mean square error of approximation (RMSEA) < 0.08, and non-normed fit index (NFI) > 0.9 as the goodness of fit for model evaluation. Based on the results in Table 2, the model had acceptable goodness of fit (χ2/df = 2.67, CFI = 0.96, GFI = 0.90, RMSEA = 0.03). The final model is presented in Figure 1Given the appropriate goodness of fit. 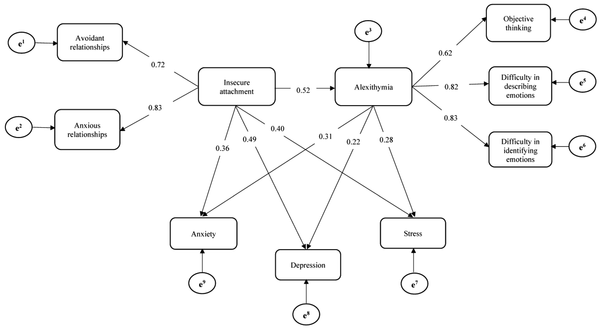 Figure 1. Proposed model for examining the mediating role of alexithymia between psychological distress and insecure attachment among university students

As shown in Table 4, insecure attachment significantly, indirectly, and positively affected anxiety, depression, and stress with the mediating role of alexithymia.

The present study aimed to investigate the relationship between psychological distress and insecure attachment in university students by mediating alexithymia. The results revealed that the path coefficient of insecure attachment to anxiety, depression, and stress was significant. This finding is consistent with that of Handelzalts et al. (7) and Dagnino et al. (23).

Attachment style is significantly correlated to depression, and this type of attachment style is one of the predictors of students' depression (9, 24). People with avoidant attachment styles may experience mood swings due to unstable access to the primary caregiver. The instability that prevails in this attachment style evokes a kind of unpredictability and uncontrollability, which contributes to pessimism about the future as one of the three angles of depression. According to cognitive theory, disorders like depression are derived from spontaneous thoughts, derived from mother-child schemas. Consequently, these breakdowns lead to the creation of schemas that will cause psychological disorders such as depression because of the destabilization of these relationships (25).

In addition, insecure primary relationship in individuals is provokes a distancing pattern from problems, feelings, and people to avoid the recurrence of negative feelings because of predicting such feelings in relationships based on their previous experiences. Avoidance resulting from insecure and avoidant attachment can prevent individuals from reacting reasonably to some life stresses due to the lack of trust. In other words, they attempt to solve their problems by avoiding others instead of seeking their help. As a result, the development of appropriate social and communication skills and problem-solving strategies is hindered, which indicates their vulnerability to anxiety (9).

The results indicated an indirect path coefficient between insecure attachment and anxiety, stress, and depression. This finding is consistent with that of Boisjoli et al. (26) and Taylor (27).

Those with a negative model toward others (active avoidant attachment) tend to have rumination, which eases the symptoms of depression. The prevalence and symptoms of depression increase by avoiding attachment accompanying alexithymia, given its impact on individuals with alexithymia with difficulty distinguishing, describing, and regulating emotions and failing to recognize their negative emotions, underlying symptoms such as depression (23).

In addition, individuals with an avoidant attachment style in childhood experience rejection through face attachment, so they deny attachment to protect themselves from further rejection. On the other hand, avoidant individuals are pessimistic and excessively self-reliant. Therefore, they become deprived of emotional-social relationships and support when facing some stress in life and fail to use positive methods and constructive strategies. Additionally, a lack of trust in others and disordered exploratory behavior significantly reduces active and normal proximity seeking in avoidant individuals. The lack of social and communication skills, as well as the ineffective problem-solving strategies, explains their greater vulnerability to anxiety symptoms. Due to the diminished ability to manage and regulate emotions following alexithymia, individuals are less likely to be able to accept emotions and lose their ability to use appropriate coping, prohibition, and repression strategies, all of which contribute to anxiety and stress (5).

One of the limitations of our study was that the statistical population was limited to Islamic Azad Universities in Tehran. Therefore, caution should be exercised when interpreting and generalizing the results. The second limitation was the cross-sectional method of the study, which investigated participants in a specific period, which limited general conclusions.

According to the results of this study, insecure attachment could predict depression, anxiety, and stress in students with the mediating role of alexithymia. Therefore, students with insecure attachments and alexithymia were more likely to suffer from depression, stress, and anxiety. Attachment styles are rooted in primary family relations, which significantly affect future relations of individuals and their disorders such as depression, stress, and anxiety, counselors. Therefore, therapists are suggested to provide preventive education programs to make parents aware of this important variable.