What Is the Status of Academic Cynicism and Its Relationship with Academic Variables Among Kermanshah University of Medical Sciences Students? 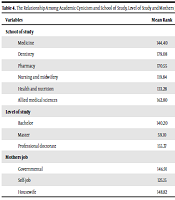 Academic cynicism means feeling tired because of demands and being pessimistic and unwilling about the texts and assignments.

The present study aimed to determine the correlation among academic cynicism and academic variables among Kermanshah University of Medical Sciences (KUMS) students.

This cross-sectional study was conducted among 288 KUMS students in 2018, who were collected using simple random sampling method proportional to the selected sample size. The data were collected by a self-administered questionnaire and analyzed by nonparametric methods using SPSS Version 16.

Students received more than half of the possible score for academic cynicism, which was significant and inversely affected academic achievement. Therefore, developing, implementing, and evaluating interventions are essential to prevent and reduce academic cynicism among students.

Students face many challenges in educational environments, which can negatively affect their motivation and academic performance (1). Academic cynicism is one of these challenges, which means feeling tired because of demands and being pessimistic feeling with no interest in the texts and assignments (2-4). In other words, Academic cynicism is a chronic stress response in students who are preoccupied with the requirements of the course, resulting from the difference between students' ability and what they expect of others in terms of academic achievement (2). In these situations, students are usually disinterested in the curriculum, reluctant to attend class regularly and participate in classroom activities. Therefore, they have frequent absences and experience feelings of inadequacy in learning the curriculum (5). Academic cynicism is considered an important issue that affects all educational levels and wastes human resource and costs (6). There are also other long-term consequences in addition to the reduction of study time. For example, the student who develops these conditions when studying is less likely to be able to perform job tasks in the future (7). As Neumann points out, academic cynicism has various effects on students, including affecting students' relationship with the university, influencing their interest in pursuing their education, and being an essential tool to understand students' behaviors, such as academic performance during their studies (8). On the other hand, the growth of any society depends on its educational system, which can be efficient by focusing on the academic performance of learners in this regard. Furthermore, identifying factors affecting academic achievement and performance of students creates a suitable approach for planning, development, and evolution of educational programs (9, 10).

Considering the importance of the subject and the lack of sufficient information at KUMS, this study aimed to determine the correlation among academic cynicism and academic variables among KUMS students.

This cross-sectional study was conducted among KUMS students in 2018. First, different faculties were divided into classes, and participants were selected randomly according to a simple random sampling method proportional to the size of each class. In this study, the data were collected by means of a self-administered questionnaire.

In the present study, the sample size was calculated using the following formula:

The sample size required for this study was estimated at 346 based on the standard deviation of the dependent variable (academic cynicism), which is equal to 2.95 according to the pilot study findings and considering the significance level of 5% and the error rate of 0.15. There were 288 complete questionnaires (response rate of 83%) after removing incomplete forms.

Students were asked to complete a questionnaire consisting of three parts as a self-report instrument in this study. The first part was demographic and academic variables, including ten items of age, gender, marital status, level of study, living in a dormitory, being a native of Kermanshah province, school, semester of study, and occupation of parents.

The third part focused on measuring academic achievement among student. Hence, grade point average (GPA) was considered a criterion with a score between 0 and 20.

The mean age of participants was as much as 22.73 years old (SD: 2.15), who ranged from 18 to 29 years old. Table 1 shows the status of backgrounds and academic variables among students.

Table 1. The Backgrounds and Academic Variables Among Students

Table 3 indicates the relationship among academic cynicism and gender, occupation of father, being a native of Kermanshah province, and living in a dormitory. According to the findings, academic cynicism has no significant correlation with the mentioned variables (Table 3).

Table 3. The Relationship Among Academic Cynicism and Gender, Father's Job, Being a Native of Kermanshah Province, and Living in a Dormitory

Table 4. The Relationship Among Academic Cynicism and School of Study, Level of Study and Mothers Job

Academic cynicism was inversely correlated to academic achievement, and the results of similar studies confirmed these findings (12, 15). Ghadampour et al. found that controlling students' academic burnout can improve their academic motivation and performance, which is in line with the results of the present study (12). In addition, Ahookhosh and Alibeigi reported that students with higher GPAs have lower levels of academic cynicism (15). The lack of interest and motivation of unmotivated students lead to a reduction in their academic performance (17). Counseling teachers in universities play a unique role in identifying and assisting students who show disinterest in their education and field to provide appropriate interventions.

Sadoughi and Markoubi reported a significant relationship between academic cynicism and gender (14), which is not consistent with the present study. Thus, both genders should be considered in developing, implementing, and evaluating interventions correlated to the educational advancement of students.

Our results indicated that the mean rank of academic cynicism was significantly higher among doctorate students of dentistry. Long chapters of some academic disciplines with a large volume of material and long periods of university study can contribute to academic cynicism in students. Our findings also showed no statistically significant correlation among academic cynicism and variables such as a semester, occupation of parents, being a native of Kermanshah province, and living in a dormitory. These findings are consistent with those of Ahookhosh and Alibeigi (15).

One of the study limitations was being susceptible to biases such as nonresponse and recall bias because of the cross-sectional method used in this study. The other limitation was self-reporting data collection, which was usually prone to recall bias. However, these exaggerations were prevented as much as possible by stating the importance of the issue and encouraging the participants to provide detailed and honest answers.

Students received more than half of the possible score for academic cynicism, which was inversely related to academic achievement. Developing, implementing, and evaluating interventions are essential to prevent and reduce academic cynicism among students.

This article is part of the result of a professional doctorates student dissertation in medicine, which thanks and appreciates all students who participated in the study and support of KUMS.