The Use of Neck Sonography in Identifying Cervical Lymph Node: A Single Center Study from 2019 to 2020 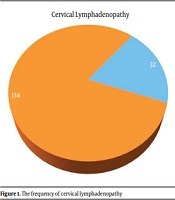 Tumor metastasis, as one of the most important prognostic factors in solid tumors, affects survival remarkably. Cervical lymphadenopathy (LAP) reflects an advanced-stage disease and changes the tumor-node-metastasis (TNM) staging of tumor, resulting in a multidisciplinary approach to the management of cancer.

This study aimed to assess the importance of neck sonography in monitoring primary tumors.

Records of 166 patients with distant primary cancers who underwent neck sonography from February 2019 to February 2020 were studied. Abnormal lymph nodes were reported, and then the patients underwent neck sonography and fine needle aspiration (FNA) or core needle biopsy (CNB) under direct US guidance. Thirty-two patients who were confirmed for malignant cervical LAP underwent neck lymph node biopsy as an easy and safe way to provide tissue diagnosis instead of providing biopsy from the primary source of tumor.

Metastatic cervical LAP found by neck ultrasound will change pretreatment TNM staging of disease to provide optimal treatment on a case-by-case basis. According to the result of this study, routine neck sonography in patients with distant primary tumors is recommended.

Tumor metastasis is one of the most important prognostic factors in solid tumors and survival of head and neck squamous cell carcinoma (HNSCC) is strongly affected by cervical lymph node metastasis (1, 2). HNSCC prevalence accounts for approximately 5% of all cancer types; however, in Iran, it seems to be 1% (3). cervical lymphadenopathy (LAP) in upper aerodigestive tract decreases the 5-year survival about 50% (4). Although most metastatic LAPs in the neck show metastases from head and neck primary tumors, sometimes distant primary tumors result in cervical LAP, especially to supraclavicular or inferior neck region (5, 6). In distant primary tumors, cervical LAP reflects an advanced-stage disease, making the management almost complex and causing a multidisciplinary approach to provide optimal care including radiotherapy, chemotherapy, and surgery as well as palliative care (5). In evaluating the unknown primary tumors or tumors diagnosed only by imaging techniques still lacking histologically proven evidence, metastatic cervical LAP provides an easy and safe method of biopsy resulting in accurate tissue diagnosis and finding the primary source of tumor based on immunohistochemistry (IHC), histology, and tumor markers which could be inimitable to the primary tumor (5). Most studies have been performed on the role of neck sonography in the detection of cervical LAP in head and neck cancers (7, 8). Ultrasound sonography is more sensitive to detect the contrast agents in tissue compared to fundamental imaging (9). Although ultrasound sonography is an easy, cost-effective, and safe technique to be used in diagnostic approaches (10), limited literature is available regarding the prognostic yield of neck sonography for cervical LAP in distant primary tumors.

The present research is a prospective single center study performed at Golestan University Hospital, between February 2019 and February 2020. The interventional radiology unit of this hospital has routinely performed neck ultrasound in patients with cancers diagnosed by imaging techniques or/and tissue diagnosis. To examine the association between cervical LAP and distant primary tumors, demographic data including age and gender, site of cancer, and cervical lymph node status have been documented.

All patients with confirmed distant primary tumors who underwent neck sonography met the inclusion criteria of the present study.

Patients with additional chronic disease; patients with non-metastatic cancer; and patients whom demographic data were not completed, met the exclusion criteria of this study.

Neck sonography was performed in a standardized systematic way using a 5- to 12-MHz linear probe by a sonographer. Malignant cervical lymph node was defined as the invasive characteristic of lymph nodes based on sonographic criteria. Then, abnormal lymph nodes were reported and fine needle aspiration (FNA) or core needle biopsy (CNB) was performed under direct US guidance.

The statistical analysis was performed using SPSS-20 software. Quantitative variables were analyzed using t-test and chi-square test was used to analyze qualitative variables. In addition, equivalent non-parametric tests were used to assess abnormal results. In order to analyze the data, descriptive statistical methods including the frequency distribution of tables, graphs, and indices of central tendency and appropriate dispersion were described to the studied variables. The normality of the distribution of quantitative variables was checked by the Kolmogorov-Smirnov test. Chi-square test or Fisher's exact test was used to assess the correlations between qualitative variables.

This study was approved by the local ethics committee (ethical approval code = IR.AJUMS.REC.1398.928) and patient confidentiality was maintained throughout the data collection and analysis process.

One hundred and sixty-six confirmed cases with primary tumors were assessed using neck ultrasound in the interventional radiology unit. Thirty-two patients (19.2%) had cervical LAP (Figure 1). Seventy-seven patients (46.4%) were male and 89 (53.6%) were female (mean age = 57.7 years; standard deviation = 12.7 years). The youngest patient and the oldest patient were respectively 22 and 88 years old. Patients were divided into 4 groups based on their age to measure the frequency of age categories involved with cancer. Group 1, age < 30 years (3 cases); group 2, age between 30 and 50 years (48 cases); group 3, age between 51 and 70 years (90 cases); and group 4, age > 71 years (25 cases). The frequency of patients in group 3 was higher than other groups, representing cancer predilection to be higher in this age period (Figure 2). 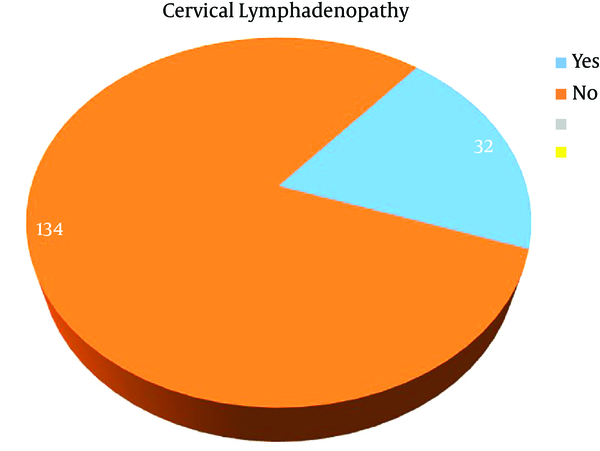 Figure 1. The frequency of cervical lymphadenopathy 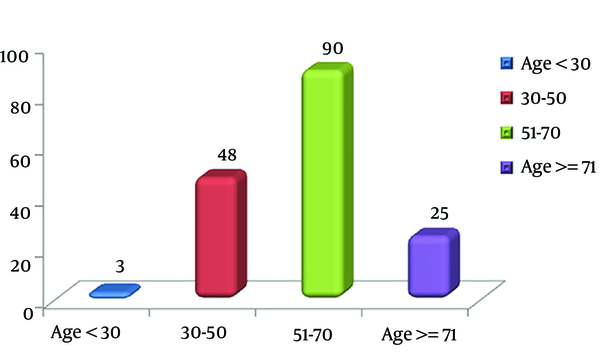 Sonographic assessment of 45 patients with GI tract cancers showed 8 cases having cervical LAP (17.7%) and 37 cases without cervical LAP. The highest prevalence of cervical LAP was seen in esophageal cancer (28.5%) and gastric cancer (25%) (Figure 3 and Table 1).

Forty-fivepatients had breast cancer, three of whom (6.7%) had cervical lymph node involvement (Figure 3).

None of the 5 patients with HCC showed LAP.

Out of 2 patients with melanoma, one showed cervical LAP.

The results of neck ultrasound represented that the most common cervical zone involved with tumor metastasis was left supraclavicular region, as 25 out of 32 cases in our study with cervical lymph node involvement showed metastasis to this region.

The general results of this study indicate that in the ultrasound examination of the studied patients, the frequency of pathological cervical lymph nodes was presented; 17.7% in GI tract cancers, 6.7% in breast cancer, 31.8% in lymphoma, 31.6% in lung cancer, 0% in HCC, 50% in malignant melanoma , 15.4% in genital cancer (uterus and cervix), and 23.5% in genitourinary tract cancers.

According to the results of cervical ultrasound in patients with cancer, the most common cervical area affected by tumor metastasis was the left supraclavicular region (Figure 5). 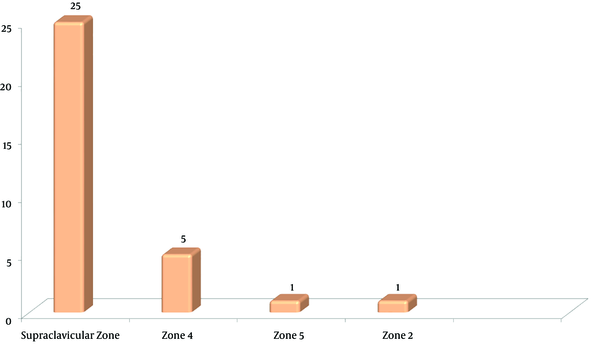 Figure 5. Involvement of different cervical zones in lymphatic metastasis to the cervical chain

Out of 7 patients having lymphoma with cervical metastasis, 5 had left supraclavicular involvement and 2 had zone 4 involvement.

Left supraclavicular involvement was observed in all 3 patients with breast cancer.

Bilateral zone 5 involvement was observed in 1 patient having melanoma with cervical metastasis.

In this case series study, 19.2% of patients (32/166) with distant primary cancers had confirmed malignant cervical LAP following neck ultrasound. In this study, the most common cervical lymph nodes affected by malignant cells in breast cancer are supraclavicular. Supraclavicular lymph node metastasis is a poor prognostic factor which represents stage IV disease, suggesting aggressive treatment including chemotherapy, surgery, and post-operative chemotherapy based on Brito et al.’s study (11). The results of this study showed that 31.6% of patients with lung cancer had malignant cervical LAP based on neck sonography. These findings are consistent with the results reported by Davis et al., reporting the frequency of cervical lymph node involvement from 1.5 to 32% (12). The variety of frequency is possibly due to the assessment of cervical node without site specification. Also, the results documented in Ahmed et al.’s study showed a similar frequency, 39.8% (13). Approximately, 28% of esophageal cancers showed cervical LAP in this study. This was about 20 to 30% based on the results reported by Nakagawa et al. (14). Detection of pathologic cervical lymph nodes by ultrasound causes the alteration of pretreatment TNM staging (T describes the size of the tumor and any spread of cancer into nearby tissue; N describes the spread of cancer into nearby lymph nodes; and M describes metastasis) of esophageal cancer. Twenty-eight percent of patients with clinically non-palpable lymph node were finally found to have cervical LAP following neck ultrasound (15). Also, metastatic cervical lymph node in patients with gastric cancer was 25%, different from Bhatia et al.’s study in 2009 that reported cervical lymph node involvement in 3% of cases affected by gastric cancer (16). Pritchyk et al. reported that the most common infraclavicular tumor which metastasizes to the head and neck just after breast and lung cancers is renal cell carcinoma (17). In our study, out of 8 patients with prostate cancer 2 cases with bone metastasis (i.e. stage 4) showed cervical LAP in neck ultrasound. Cervical metastasis by bladder urothelial carcinomas is too rare, suggestive of extensive metastatic disease and poor prognosis (18). In our study, one patient with bladder carcinoma and extensive pelvic metastasis underwent neck sonography, showing cervical LAP due to underlying extensive pelvic metastasis. The findings reported by Henriksen et al. have represented the prevalence of cervical node involvement in nearly 0.1 to 1.5 % of patients with cervix cancer (19) which has increased to 8% when assessed by fluoro-2-deoxyglucose positron emission tomography (FDG-PET) (20). The result of our research showed approximately 22% of patients with neck metastasis by cervix cancer. Also, in Oosaki et al.’s study, metastasis to supraclavicular nodes by endometrial cancer was rare, reported in 0.15% of cases (21), which is consistent with the result of our study, with no case of cervical lymph node metastasis involved by endometrial carcinoma.

Although most metastatic lymph nodes in the neck represent metastases from primary tumors of the head and neck, sometimes-distant primary tumors result in cervical LAP and changing pretreatment TNM staging and therefore different methods of treatment.

These patients underwent neck lymph node biopsy instead of providing biopsy from abdominopelvic visceral organs, vertebrae, pleura and lungs. In fact, taking a biopsy from the primary source of tumor is not occasionally accessible well due to the small size of mass, depth of tumor, its location or post-biopsy consequences such as bleeding, vascular rupture, etc. Taking biopsies from metastatic cervical lymph nodes is almost safe due to lack of the mentioned disadvantages and is done more easily and highly accurate, resulting in accurate tissue diagnosis which is necessary to provide optimal treatment recommendations, including consideration for surgery, radiotherapy, chemotherapy, hormonal, or biological therapy as well as palliative care when necessary. Based on the results of this research, we recommend routine neck sonograohy in patients with infraclavicular primary tumors. Given the limited literature regarding the prognostic yield of neck sonography for cervical LAP in distant primary tumors, we suggest further research in this field.

This study has been extracted from the thesis of Mahsa Akhavan Sabagh. The authors make special thanks to their coworkers and patients who made kind sharing for performing this study.

Copyright © 2021, Jundishapur Journal of Chronic Disease Care. This is an open-access article distributed under the terms of the Creative Commons Attribution-NonCommercial 4.0 International License (http://creativecommons.org/licenses/by-nc/4.0/) which permits copy and redistribute the material just in noncommercial usages, provided the original work is properly cited.
COMMENTS