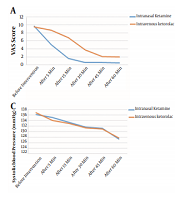 Renal colic is one of the most common complaints among refereeing patients to the emergency department (ED). Non-steroidal anti-inflammatory drugs (NSAIDs) and opioids are gold standards to relieve pain.

The aim of this study was to evaluate the effects of intranasal Ketamine on pain control versus Ketorolac.

In this randomized clinical trial (RCT), the patients were randomly assigned into two groups. Ketorolac 30 mg was given intravenously to all patients in the control group, the patients in intervention group received 1 mg/kg drops of Ketamine intranasally. Pain severity, vital signs, and adverse events (AEs) were recorded after 60 minutes post-dose.

Intranasal Ketamine was beneficial in controlling renal colic-induced pain, which could be prescribed as a treatment instead of normal treatment. It can rapidly improve pain relief in the short term, has lower AEs, and increases the patients' satisfaction.

Renal colic is a common complaint among patients referring to emergency departments (EDs) (1% of presentations to EDs) (1), and it is seen in 5 - 15% of subjects’ lifetime (2). The movement of renal stone in the urinary tract is a common cause of severe groin pain. Both non-steroidal anti-inflammatory drugs (NSAIDs) and opioids are gold standards for relieving pain with acute renal colic (3, 4). Although opioids are potent and cheap, but they have some adverse events (AEs) such as nausea, vomiting, constipation, respiration depression (in larger doses), drowsiness, and hypotension (5). Compare with NSAIDS, opioid has fewer complications such as drowsiness, vomiting, and nausea; but it was demonstrated they can develop AEs such as nephropathy and platelet dysfunction (6). Concerning various AEs of opioids and NSAIDs, discovering new drugs with adequate analgesic properties and fewer AEs is essential (7).

Ketamine is an arylcyclohexylaminethat acts mainly on glutamate binding sites, N-Methyl-D-Aspartate receptors (NMDA), and non-NMDA receptors cause psych sensory effects, amnesia analgesia, and neuroprotection (8). Ketamine is used as a procedure not requiring any musculoskeletal relaxation or in short surgeries. This drug can be prescribed for all groups of patients except in exceptional cases such as patients with severe hypertension, brain traumas, cardiovascular diseases, and heart attack (9, 10). Ketamine is administered intravenously and/or intramuscularly (11), but it can also be administered intranasally with few effects on the heart (12). As far as the researchers investigated, there is not sufficient clinical studies on the efficacy of intranasal Ketamine on renal colic.

This study aimed to evaluate the clinical efficacy of intranasal Ketamine in renal colic and compare it with traditional treatment methods [intravenous NSAIDs (Ketorolac)].

The current survey is a single-center, randomized phase III clinical trial to compare the effect of intranasal Ketamine versus intravenous Ketorolac for pain control in the renal colic patients in Imam Khomeini Hospital of Ahvaz, Iran from November 2019 to May 2020. The study protocol was approved by the Medical Ethics Committee of Jundishapur Ahvaz University (reference number: IR. AJUMS.U-97023) and it was performed as a phase III clinical trial (code: IRCT20180526039846N1).

Based on clinical and para-clinical findings [ultrasound and computed tomography (CT) scan], the patients were identified by emergency medicine specialists. All participants signed a written informed consent.

The inclusion criteria were: (1) patients referred to ED with acute renal pain (severity more than five based on a visual analog scale [VAS]) based on the radiological examinations and clinical history; (2) aged over 18 years; and (3) not received analgesic drugs for at least six hours.

The control group received Ketorolac 30 mg/kg (in bolus form) and placebo intranasally. In the intervention group, Ketamine 1 mg/kg was prescribed intranasally and placebo intravenously. Patients with a VAS score ≥ 3 received 1 μg/kg of IV fentanyl as rescue analgesia. In patients suffering from dehydration or sepsis, 10 mL/kg liquid therapy was used. During the treatment period, all patients were under the supervision of emergency medicine specialists. Also, patients with incomplete data were excluded.

The pain intensity was a 10-cm horizontal line. This line was written with ‘pain with the most intensity’ on the right with a score of 10 and ‘no pain’ on the left with a score of zero (13). The primary outcome was assessed for pain reduction before administration, 5, 15, 30, and 45 minutes after administration. For this evaluation, relief pain ≤ 30 based on VAS score was considered significant. After 30 minutes of the drug administration, no significant reduction in pain was observed (∆VAS ≥ 3); the Fentanyl 1 µg/kg with 5-minute interval time was prescribed until the intensity of pain was reduced. The secondary outcome was assessed according to the time of staying in an emergency room (between 1 - 2 hours), the value of financial of treatment, the need for lifesaving therapy (used for patients with VAS ≥ 5 after 60 minutes), side effects after 60 minutes, and measuring satisfaction based on 5-point Likert scale (0 = poor to 4 = excellent) 60 minutes after administration. Vital signs of the patients and AEs after treatment, such as dizziness, rash, headache, tachycardia, breath distress, blurred vision, and vomiting were recorded.

To compare qualitative variables and determine the normal distribution of quantitative parameters, chi-square test and the Kolmogorov-Smirnov test were used, respectively. T-test and Mann-Whitney test were used for variables with normal and without distribution, respectively. To evaluate the differences between the groups in different periods, repeated measures ANOVA was used. A P-value < 0.05 was considered as significant. All data were analyzed by SPSS software (V24).

In this study, a total of 100 patients were randomly divided into two groups (intranasal Ketamine and intravenous Ketorolac) (Figure 1). The patients' mean age was 34.39 ± 5.60 years, and 71 (71%) were male (Table 1). In patients who did not respond to treatment after 30 minutes, fentanyl 1 µg/kg with 5-minute interval time was prescribed until the pain reduced; in this regard, no patients were excluded from the study. 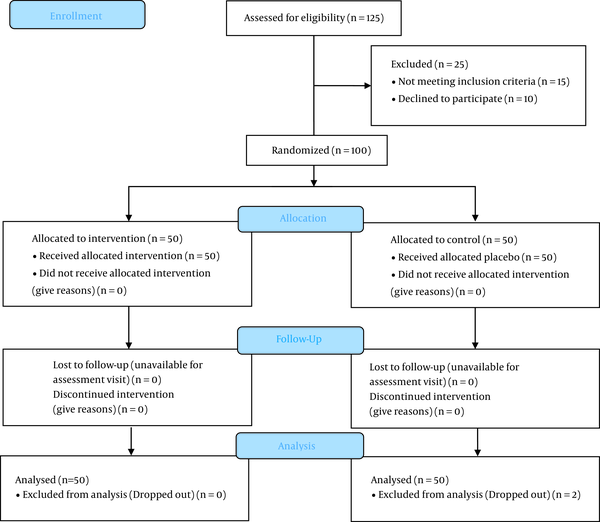 Table 1. Studied Variables in Different Periods among Control and Intervention Groups a 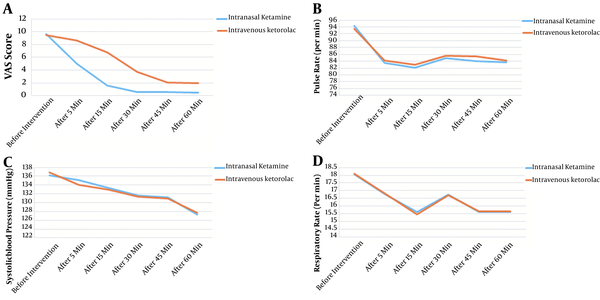 The differences between 2 groups during different time for A, VAS score; B, plus rate; C, systolic blood pressure; D, respiratory rates.

Pain management is vital in patients with renal stones, and most medications used for this purpose are intramuscular and intravenous or oral opioids and NSAIDs. Ketamine, as an opium alternative, is an analgesic drug in relieving acute pain with different administration methods such as intranasal (14). The bioavailability of intranasal Ketamine is 45%, the peak volume of plasma was seen in less than 30 minutes, and the terminal half-life is around 2 hours (15).

Carr et al. showed that blood level of ketamine in intranasal administration can reach a detectable level after two minutes, with a median duration of nearly 30 minutes (19). Moreover, other studies showed that the effect of intranasal ketamine in reducing pain would last for three hours (20). In our study, the pain was relieved 5 and 60 minutes post-administration, whereas in the study by Shrestha et al. the pain score decreased 15 minutes after administration (21).

Likewise, intranasal ketamine was observed by Yeaman et al. within 30 minutes, in which the pain severity was lowered by 2.4 units (22). Furthermore, Andolfatto et al. (23) showed that intranasal Ketamine can minimize the pain score depending on VAS score by at least 1.3 units after 30 minutes, which is inconsistent with the present survey. In contrast, no significant differences for reliving pain scores were observed in the same study (24).

After analyzing for AEs, our data demonstrated that dizziness and nausea were the most common AEs among patients, which is consistent with the studies by Shrestha et al. and Andolfatto et al. Additionally, their survey revealed intranasal ketamine could be useful in patients with acute injury (21, 23). The short follow-up period and a small sample size were the main limitations of the current investigation.

This findings of current study revealed the positive benefits of intranasal ketamine compared to standard treatment in managing pain due to renal colic. This substantial therapy can contribute to dramatically increasing short-term pain regulation with reduced AEs and enhanced patient satisfaction.

We acknowledge the Emergency Medicine Department of Imam Khomeini Hospital in Ahvaz, Iran for the kind help. This research received no specific grant from any funding agency in the public, commercial, or not-for-profit sectors.