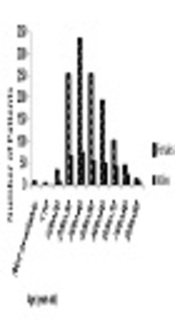 Previous studies confirm that thyroid cancer, as the most common endocrine cancer, accounts for about 1% of new malignant diseases all over the world.

Recorded data of thyroid cancer were obtained from the Isfahan Cancer Registry at the Deputy of Health. Continuous variables were reported as means ± SD and categorical variables as frequencies and percentages. In order to examine the relationship of PP with age and gender, the t-test and chi-squared test were used, respectively. The PP was defined as the proportion of the total cases over the study years to the population at risk during the same period ×100000.

In this study, not only was the period prevalence 3.7 times higher in females than in males but also there was an increase (61.9%) in the incidence of thyroid cancer from the year 2011 to 2015. Based on the findings, however, detection methods of thyroid cancer have improved recently all over of the world, but a well-established classification of the disorder, pharmacotherapy, and surgical plan in the Iranian population can improve the clinical outcome. Further study in these contexts seem to be useful in Isfahan, Iran.

Recently, the prevalence of thyroid cancer, as the most common endocrine malignancy, has increased in the world. From 2006 to 2010, its’ incidence increased at an annual rate of 5.4% and 6.5% in males and females, respectively (1). The follicular cell of the thyroid gland that initiates the cancer process is not usually aggressive (2). The American Cancer Society estimated 53990 new cases of thyroid cancer and 2060 deaths to occur in the year 2018 (3). Globally, thyroid cancer accounts for about 213000 new cases. Regarding the Iranian population from 2004 to 2010, a total number of 10913 new cases of thyroid cancer in the age range of 7 to 90 years were reported. The data indicate an incidence rate of 2.20 per 100,000 persons in Iran, with the papillary form as the most common type of thyroid cancer (4). Regarding the reported increase in thyroid cancer, it is not clear whether this rise is due to the increased use of thyroid sonography and sono-guided fine-needle aspiration cytology or because of a true rise in thyroid cancer (5). Although the mortality of differentiated thyroid cancer is comparatively low, the rate of disease relapse or persistence is high, leading to increased morbidity (6). In the United Arab Emirates, cancer-specific epidemiological studies confirmed an overall age-standardized cancer rate of 70.1 and 74.2 per 100,000 in males and females, respectively, with breast, cervical, and thyroid cancer being the top three forms in females (7). Another epidemiological study in Jordan ranked cancers among females as breast, colorectal, lymphoma, thyroid, and uterine (8). Reports indicate that global disparities exist in thyroid cancer incidence and mortality rates. Although the incidence rates are higher in countries with a high human development index, the dissimilarity index illustrates that deaths occur more in poor nations (9). Concerning all ages, a 14% increase was reported in disability-adjusted life years as thyroid cancer burden per 100,000 Iranian populations in both genders from 1990 to 2010, (10). Currently, due to the western lifestyle, the global incidence of thyroid cancer is growing constantly all over the world, as well as in Iran. In addition, there is a growing utilization of more sensitive techniques for early diagnosis of the disease (10).

Therefore, this study aimed to investigate the period prevalence (PP) and the incidence rate (IR) of thyroid cancer in Isfahan province, Iran.

The Isfahan Cancer Data System Registry is a population-based registry of all new cases of cancer including thyroid cancer (C73) occurring across Isfahan city and its’ rural province. The available data included the year of diagnosis, gender, age, place of birth, place of living, and monographic code for each individual. The ethical approval for the study was granted by the Isfahan Kidney Transplantation Research Center. The work presented in this paper is extracted from a project approved under the ethics code No., 295115. Continuous variables are reported as means ± SD and categorical variables by frequencies and percentages. In order to examine the relationship of PP with age and gender, the t-test and chi-square test were used, respectively. All analyses were performed by SPSS (SPSS® version 20; IBM Corp., Armonk NY, USA). The total population of Isfahan city was obtained from the Isfahan Program and Budget Management Organization. The PP was calculated as the proportion of the total cases over the years 2011 - 2015 to the population at risk during the same period × 100000. The incidence rate (Irs.) was calculated by dividing new cases of cancer during a given period to the population at risk during the same period × 100 000 (11-16).

Figure 2. The age distribution in the total population studied

Thyroid cancer is the most common cancer of the endocrine system that consists of a group of potentially treatable cancers with a wide range of features and variable prognoses (10, 17, 18). Thyroid cancer is one of the fastest growing cancer diagnoses worldwide (19).

Studies based on descriptive epidemiology can provide information for a better understanding of the geographic distribution of cancer and its management by directing strategies toward pharmacotherapy and surgical interventions (7).

The highest and the lowest incidence of thyroid cancer have been reported for Kerman and Golestan, respectively (18). The current study was designed based on the data on thyroid cancer reported by Isfahan Cancer Registry as a division of Isfahan Deputy of Health to reveal the period prevalence and incidence rate in Isfahan province, Iran.

Earlier studies confirmed thyroid cancer as the seventh most common malignancy in women; it was also 2.9 times more common in women than in men (19, 20). The female to male ratio for endocrine cancers in another Iranian study was shown 3 to 1 (18). In agreement with previous publications, the current study showed a higher period prevalence in females with a value of 49.3 than in males with a value of 13.3 (per 100000 persons), with a significant difference (chi-squared test; P < 0.001). Safavi et al. in 2016 reported a female-male ratio of 2 (4). In this study, the PP was 3.7 times higher in females than in males.

Previous publications classified patients according to age distribution as follows: Around 15% in the young age group under 35 years, 60% in the middle age group between 35 and 54, and 25% in the old age group between 55 and 87 years (19). In this study, the mean age of patients with thyroid cancer was 41.9 years. This is comparable with a previous study of the Iranian population that reported a mean age of 45 years (4). A study performed in Isfahan, Iran, reported the prevalence of thyroid incidentaloma as 13.2% that was more prevalent in females than in males (21).

This trend could be associated with the multidimensional measures. This could remind health authorities of moving toward updated strategies.

The limitation of our study was the relative lack of recorded pharmacotherapy data for each individual. Further investigation seems to be beneficial in assessing the true correlation between health care activities in terms of pharmacotherapy management and the number of thyroid cancers diagnosed in Isfahan province. Present tendencies recommend that in the future, many more cases of this cancer will be detected and many more patients will undergo treatment for thyroid cancer (23-27).

We thank the Deputy of Health for providing data, Professors (Hamid Mazdak, Mehrdad Mohammadi and Masih Saboori) as well as Isfahan University of Medical Sciences for supporting this study.