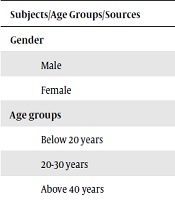 There are studies on Helicobacter pylori infection in Khyber Pakhtunkhwa. However, district Buner is far away, and most people have the least access to more developed techniques for the diagnosis of different diseases, and no study has been conducted in this region. Therefore, this study was conducted to determine the frequency of H. pylori infection in patients presenting with upper gastrointestinal symptoms.

This study aimed to determine the frequency of H. pylori antigen in the stool of patients with upper gastrointestinal symptoms.

A cross-sectional study was conducted at Bilal Medical Trust Hospital from February 2018 to November 30, 2019. A total of 111 patients presenting with upper gastrointestinal symptoms were included in this study. A purposive (non-probability) sampling technique was used. All of the patients were screened for H. Pylori in stool specimens using a specific stool H. pylori device.

The present study revealed a higher prevalence of H. pylori in females than in males. The maximum prevalence was noticed in the age group of 20 - 30 years. The study indicated a significantly higher rate of H. pylori infection in patients who used uncooked milk and water from contaminated sources.

Helicobacter pylori is a Gram-negative, microaerophilic bacterium that is commonly found in the stomach. It is found in approximately half of the world’s population (1). The infection is mostly acquired earlier in life and is common in less developed countries. There is a positive correlation between H. pylori and peptic ulcers. In some patients, the disease progresses to intestinal metaplasia, dysplasia, and carcinoma (2). Helicobacter pylori infection can be diagnosed by different techniques, including invasive techniques, requiring endoscopy and biopsy (e.g., histological examination) and non-invasive techniques, such as serology, urea breath test, urine/blood test, or the detection of H. pylori antigen in stool specimens (3).

The worldwide prevalence of H. pylori infection varies according to socioeconomic factors and levels of hygiene. According to a meta-analysis of 184 studies conducted from 1970 to 2016 to find out H. pylori infection in 62 countries at different time frames, it was concluded that more than half of the world’s population were infected with H. pylori. Whereas the U.S. and Australia have a low prevalence of H. pylori, their indigenous populations have a high prevalence. The regions with the highest prevalence were Africa, Nigeria, Portugal, Estonia, South America, and Western Asia, while those with the lowest prevalence were Switzerland, Denmark, New Zealand, Oceana, Western Europe, and North America. Helicobacter pylori was estimated to infect 4.4 billion people in 2015 (5). The H. pylori prevalence in Pakistan is at an alarming level. According to a study, 85% of chronic gastritis patients and about 100% of duodenal ulcer and duodenitis patients show evidence of infection with H. pylori. Most of the patients were male and relatively young (6). Another study showed a prevalence of 74.4%, with 73.5% in males and 75.4% in females. The infection increased with age, and adults were mostly affected (7).

There are studies regarding H. pylori infection in Khyber Pakhtunkhwa. However, district Buner is far away, and most people have the least access to more developed techniques for the diagnosis of different diseases; in the same way, people have no concept of research due to the lack of education. Therefore, data are needed to highlight the prevalence of H. pylori infection in patients in this district.

A cross-sectional study was conducted from February 2018 to November 30, 2019, at Bilal Medical Trust Hospital, Buner. The consent forms were signed by all patients. The method for identifying patients depended on the consultant in the OPD. The inclusion/exclusion criteria included patients who presented to Medical OPD with upper gastrointestinal symptoms, i.e., epigastric pain, dyspepsia, heartburn, burping, blotting, nausea, and vomiting while those patients were excluded who were already diagnosed with H. pylori and were on eradication therapy but still presented with upper gastrointestinal symptoms.

We used a non-invasive method that did not involve radioactive isotopes. The assay was easy and did not require professional training. It provided a rapid result with high sensitivity and specificity. The test used for the detection of H. pylori was the “One Step Rapid HP Ag Test” (Healgen, USA), which detects antigens specific to H. pylori infection in stool samples. Simply, one drop of the stool sample was diluted in buffer and put on strip. After incubation for 10 minutes, the bands on the device were noted. For a valid test, both control and T lines were noted. In the case of positive tests, both lines were prominent, and in the case of negative tests, only the control line was prominent.

Table 1. Subjects and Their Positivity Rate

The various prevalence rates among the residents of different countries (8) advocate that different parameters play important roles in the prevalence of H. pylori. These parameters include socioeconomic status, sanitation conditions, demographics, and environmental conditions. There is a high prevalence rate of H. pylori infection in different regions in Pakistan. A study was conducted in the rural areas of Islamabad in asymptomatic patients, which showed a prevalence rate of 74.4% (9). Similarly, a study in the southern region of Pakistan (Karachi) showed a prevalence of 45% (10). These studies are in line with our study, which showed a high prevalence rate of 66.66%. Around 36.44% of symptomatic patients were negative on the stool antigen test. The high proportion of symptomatic patients reporting negative for H. pylori suggests other reasons for the symptoms. The other relevant factors, as suggested by Levenstein et al. (11), can be stress, socioeconomic status, smoking, and over-the-counter use of Non-steroidal Anti-inflammatory Drugs (NSAIDs) by patients with upper gastrointestinal symptoms in our community. These factors might be the roots of dyspeptic symptoms among more than half of these patients, and this might not be just due to the H. pylori infection. The male-to-female ratio in our study showed that females had a higher prevalence rate than males (53.15% vs. 46.84%) (Table 1).

A meta-analysis conducted in 2006 contradicts our study, which showed that men predominated in H. pylori infection globally (12). Similarly, another study obtained the same results as ours and showed the prevalence was more in women than in men (13). The mean age of prevalence was found in patients in the age group of 20 - 30 years (Table 1). According to a study conducted in 2000 and 2005 (13, 14), the prevalence of H. pylori increased with increasing age. The results of these studies are in line with ours and strengthen the results of our research. There seemed to be an increased incidence of H. pylori in people consuming fresh milk (52.54%) than in people consuming powered/packed milk (15.25%) (Table 1). There have been several studies conducted around the world that prove the transmission of H. pylori from the milk of livestock as one of the sources of disease transmission (15).

Patients who consumed water from water wells had a higher infection rate than those who used water from tube wells (72.87% vs. 27.11%) (Table 1). The infection rate of H. pylori in great part is related to the water source used by the populous for drinking and other daily activities, e.g., washing fruits, etc. According to the conclusion of a study conducted by Santiago et al., H. pylori can survive in water and can be very infective in drinking water; thus, it proves that water distribution systems can be a source of spread of H. pylori (16). Some studies conducted in Pakistan showed that samples collected from different water sources around major cities of Pakistan were infected with H. pylori (17, 18).

Like other studies, the present study had some limitations. Our main limitation was the study setting, as there were limited patients in our setting compared to other tertiary care hospitals. It also did not properly harbor the socioeconomic status of patients and the residence of individual patients. Thus, this study lacks to determine the prevalence of the whole region. For future studies, H. pylori can be correlated to the socioeconomic status, as well as the locality of patients, to determine the high-prevalence areas of the region. Further research can be done on the water supply of many sectors of this region to determine the infected sources of drinking water.

The present study revealed a higher prevalence of H. pylori in females than in males. The maximum prevalence was in the age group of 20 - 30-years-old. This study also showed that H. pylori is transmitted from consuming fresh milk and water from contaminated sources.

We are thankful to Dr. Noor Muhmmad for complete support for the current study.