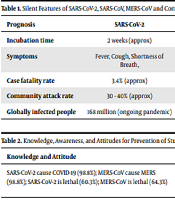 Severe acute respiratory syndrome coronavirus-2 (SARS-CoV-2) preferentially infects respiratory tract cells, but it has organotropism. Middle East respiratory syndrome coronavirus (MERS-CoV) is significantly distinct from common cold and SARS coronavirus. In past few years, the SARS-CoV-2 and MERS-CoV caused several deaths in South Korea.
The aim of current study was to assess SARS-CoV-2 and MERS-CoV awareness and epidemic prevention ability in South Koreans.According to our results, out of 1500 participants, 98.8% and 64.3% were aware of SARS-CoV-2 and MERS-CoV, respectively. Moreover, 97% of the participants used masks for prevention of airborne diseases, while 65.3% of the participants reused the same mask for several days. In addition, 50% of the participants were not satisfied with the government support. Future viral epidemics can be prevented by disseminating advanced knowledge and awareness among general public.

Although severe acute respiratory syndrome coronavirus-2 (SARS-CoV-2) pandemic has seriously affected the whole world, South Korea successfully managed to limit the SARS-CoV-2 spread via various strategies. There was no report of full lockdown during the viral spread in the country. People vigilantly responded to the viral epidemics, and based upon experience of previous Middle East respiratory syndrome coronavirus (MERS-CoV) epidemics in South Korea, medical professionals, students, and political leaders actively participated to combat coronavirus disease 2019 (COVID-19). South Koreans used latest technology and digital approaches to introduce smart trace mechanism against COVID-19 patients to tackle the situation tactically. However, there is a need to identify the level of awareness among general populations of South Korea. The current study aimed to evaluate awareness, knowledge, and epidemic prevention abilities among South Koreans between Dec 2019 and Aug 2020.

Viral pathogens are increasing worldwide, and it is anticipated that soon viruses would emerge as highly dangerous entities (1). Prevention is better than cure. Identification of epidemiological patterns of viral spread and dissemination of knowledge and awareness related to risk factors associated with viral transmission in different populations at risk could prevent the emergence of epidemics (2, 3). The SARS-CoV-2 emerged as an epidemic in Asia and became pandemic in early 2020 causing serious public health concern internationally. The MERS-CoV, member of the beta group of coronaviruses, is significantly distinct from SARS coronavirus and common cold coronavirus (4). Some salient features of SARS-CoV-2, SARS-CoV, MERS-CoV, and common cold are shown in Table 1.

The primary source of MERS infecting humans is camels, while bats are considered ultimate reservoir (5). The global number of SARS-CoV-2 positive cases on 31st May 2021was 184 million, and the number is still climbing vigorously. Also, the number of deaths due to COVID-19 was 3.98 million, and the worst affected countries were the United States of America and India (6-8). In 2012, the MERS was initially reported from Kingdom of Saudi Arabia, but later the viral infection was reported from more the 21 different countries, which depicted huge viral spread. During 2014 and 2015, the MERS epidemic in Saudi Arabia infected 688 with 282 deaths, while in South Korea, it infected 186 with 36 deaths. SARS-CoV-2 and MERS have become a major threat to the global health.

The prevalence of viral infections is unfortunately increasing day by day due to the limited awareness among general population (9-12). Poor diagnostic abilities and inadequate knowledge about viral transmission via fomites limit accurate acquisition of prevalence rates (13, 14). Similarly, overcoming COVID-19 vaccine hesitancy and determining adequate antibody levels against SARS-CoV-2 spike protein is a challenging task (15, 16). Although the time of MERS-CoV and SARS-CoV-2 outbreak was different, based upon the experiences of emergency preparedness centers, paramedical staff, and government officials, the surge of COVID-19 in South Korea was effectively tackled within short period of time. Therefore, we asked whether the previous knowledge, awareness, and attitude of general population of South Korea about MERS-CoV contributed to emergency preparedness and development of smart information technologies against SARS-CoV-2 spread. Accordingly, the aim of the study was to assess the knowledge about SARS-CoV-2 and MERS-CoV awareness and prevention in general population of South Korea.

Table 2. Knowledge, Awareness, and Attitudes for Prevention of Study Participants

Table 3. Utilization of SOPs and Level of Satisfaction with Government Efforts

Efforts are still needed to improve knowledge and awareness level about prevention of viral diseases among general population in South Korea. Policy makers should not only provide wider opportunities for the dissemination of knowledge and awareness about viral transmission, but also focus on epidemiological patterns of emerging epidemics in world. In educational institutes and offices, disseminating online awareness programs and conducting online seminars related to biosafety and virus control could be a better strategy to prevent future viral epidemics.