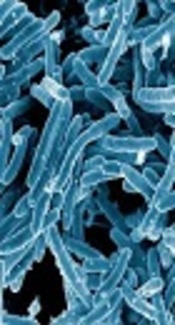 Heparin-binding hemagglutinin (HBHA) protein is a surface adhesin that mediates the attachment of Mycobacterium tuberculosis to host cells by its own unique, carboxyl-terminal region. The methylated HBHA has a specific motif with a lysine-, alanine-, and proline-rich domain. More recently, it has been shown that HBHA protein has potential activity in stimulating immune responses, and is a promising new candidate for diagnostic applications besides a protective antigen against tuberculosis.

The aim of this study was to isolate a mycobacterial latency gene (hbha), and subsequently produce its protein as a new antigen for the Interferon-Gamma Release Assay test (IGRAs).

Detection of a 500-bp gene and sequencing of recombinant pet-mtb32C-hbha vector, all confirmed the accuracy of the cloning procedure. A 36-KDa band of Mtb32C-HBHA protein was also detected by western blotting.

Mycobacterium tuberculosis, the causative agent of tuberculosis, is a strike aerobic, intracellular pathogen, which in most cases enter the body via the respiratory tract. In 2012, the world health organization (WHO) reported 8.6 million cases of tuberculosis worldwide with most occurrences reported in Asia (58%) and Africa (27%). From the site of initial infection, the lungs, the tubercle bacilli spread to other parts of the body through the lymphatic or blood vessels. Tuberculosis remains a significant difficulty for human health in most parts of the world, with about two million deaths, annually (1, 2). Epidemiologically, 30% of infected individuals do not have any signs of tuberculosis disease and are unable to spread infection to others. This condition is known as latent tuberculosis infection, for the diagnosis of which there are currently two main tests, including tuberculin skin test (TST) and interferon-gamma release assays (IGRAs).

Tuberculin skin test has a diagnostic challenge in diagnosis of tuberculosis because it has a low specificity and there is cross-reactivity with environmental mycobacteria and Bacille Calmette-Guerin (BCG) vaccine in vaccinates (3, 4). Over the past decade, many studies have resulted in the design and development of a new diagnostic method, known as Interferon-gamma release assays (IGRAs). These assays are based on the principle that the T-cells of individuals, who have been infected with M. tuberculosis, secrete interferon gamma (IFN)-γ in response to specific antigens of M. tuberculosis. Furthermore, IGRAs were developed to replace conventional tuberculin skin test for the diagnosis of latent tuberculosis infection because IGRAs have high specificity and several advantages over TST (4).

Heparin-binding hemagglutinin (HBHA) protein is a mycobacterial adhesin and virulence factor that is required for dissemination of M. tuberculosis from the lung to internal organs, such as the spleen. Absence of the hbha gene in mutant strains leads to deficiency in extra-pulmonary dissemination (5-7). The hbha gene present in M. tuberculosis and BCG genome is responsible for binding of bacteria to alveolar epithelial cells (8-10). Its C-terminal domain bears post translational modification; methylation of repeated lysine-rich motifs. Previous studies indicated that HBHA is an immunogenic antigen and plays a significant role in inducing humoral and cellular immune responses (11-14). HBHA protein could induce high levels of anti-HBHA antibodies and interferon gamma (IFN)-γ from T-lymphocytes in most patients infected with M. tuberculosis compared to BCG-immunized individuals. These studies suggest that HBHA protein is an appropriate antigen for tuberculosis diagnostic tests, such as IGRAs. In fact, the cornerstone of the immune response to mycobacterial infection is the production of gamma-interferon (IFN)-γ by CD4 cells. Interferon-gamma release assays (IGRAs) are new techniques for diagnosis of latent tuberculosis infection, and HBHA antigen is used as a new candidate for IGRAs (15-17).

In the present study, hbha gene along with mtb32C genes were isolated from M. tuberculosis H37Rv strain and cloned in the pet21+ vector for enhancing expression and raising antigenicity of the hbha gene. The expression of recombinant plasmid was verified in Escherichia coli BL21 (DE3) CodonPlus strain.

3.1. Isolation of mtb32C and hbha Genes from the Mycobacterium tuberculosis Genome

The entire DNA of M. tuberculosis was prepared as described, previously (18). By using specific primers designed with DNAMAN (Lynnon Biosoft version 5.2) and Gene Runner (Version 3.05, Hastings Software Inc.) software, the mtb32C and hbha genes were isolated from the M. tuberculosis H37Rv genome. Two sets of primers were used as follows: 5’-ATATCATATGACGGCCGCGTCCGATAACT-3’ as the forward primer and 5’- ATATGAATTCAGCAGGGGGTCCCTCGGCCAATGT-3’ as the reverse primer for mtb32C and 5’- ATATGAATTCATGGCTGAAAACTCGAACATT-’3 as the forward primer and 5’- ATATGGATCCCTAatgatgatgatgCTTCTGGGTGACCTTCTT -3’ as the reverse primer for the hbha gene.

Underlined letters indicate NdeI, EcoRI, and BamHI restriction sites, respectively. Small and bold letters in the reverse primer of hbha gene represent 4 Histidine (His)-tag and stop codon sequences. Polymerase Chain Reaction (PCR) was used for genes amplification. The mixture containing 1 μg of the DNA sample, 2.5 mM MgCl2 (Fermentas, Germany), 0.5 mM of each dNTPs (Fermentas, Germany), 10 pmol of each primer (CinnaGen, Iran), and 1 unit of Taq polymerase (CinnaGen, Iran) was prepared and then transferred to a thermocycler (Applied Biosystem,USA). Thermocycling conditions for amplification of both mtb32C and hbha genes was 35 cycles (95°C for 1 minute, 58°C for 1 minute, and 72°C for 1 minute) after an initial denaturation step of at 95°C for 5 minutes. Finally, amplified DNA fragments were assessed by agarose gel electrophoresis and stained with the Green Viewer (Pars Tous, Iran).

First, the hbha gene and pet 21+ were digested with BamHI and EcoRI restriction enzymes and then ligated together as described in a previous paper (18). Pet21 + vector containing the hbha gene and PCR product of the mtb32C gene were digested with NdeI and EcoRI and subsequently fused together using the T4 DNA ligase enzyme. All digestion and ligation procedures were described in detail, previously (19).

To confirm the presence of mtb32C - hbha mRNA in transformed E. coli BL21 (DE3) CodonPlus cells with recombinant vector, the RT-PCR method was employed. All procedures were performed according to the manufacturer’s instructions and previous studies (18-20).

The recombinant vector containing mtb32C and hbha genes from M. tuberculosis H37Rv was constructed. This vector was (mtb32C-hbha-pet21+) sequenced with the T7 promoter and T7 terminator primers that showed 100% identity with related sequences in Genbank. Colony -PCR and sequencing methods confirmed correction of all cloning procedures (Figure 1). The production of related mRNA and chimeric protein of about 35.5 kDa was confirmed with the RT-PCR method and Western blot analysis using anti-His Tag antibody, respectively (Figures 2 and 3). Despite available vaccines, drugs, and diagnostic methods, tuberculosis infection remains as a concern in the 21st century and is still the leading cause of death more than any other single infectious disease. The lungs are the initial route of infection and M. tuberculosis could enter and replicate within the resident alveolar macrophage, dendritic cells, and epithelial cells (pneumocytes), using several receptors. It has been estimated that two billion people worldwide have latent infection and are at risk of active tuberculosis (21-23).

Latent tuberculosis is defined as a condition, in which M. tuberculosis remains inside an infected macrophage in dormant state without any clinical manifestations. It has been estimated that one-third of the world’s population has LTBI. About 5% to 10% of individuals, who have latent tuberculosis will experience reactivation of active tuberculosis with defined clinical symptoms in their lifetime while this rate will be higher in immunocompromised patients. In fact, subjects with latent infection serve, as a source of tuberculosis infection and a serious threat for healthy people and the community. Any changes in the immune system after exposure to specific conditions, such as malnutrition, acute infections, or other suppressive immunity conditions increase the risk of active tuberculosis (24-26).

The identification and treatment of LTBI is a principle part of tuberculosis control strategies and decreases the incidence of disease reactivation. The risk of progression of LTBI to active disease is very high within patients with immunocompromised conditions, chronic renal failure disease or patients receiving chemotherapy (25). Treatment of latent tuberculosis with isoniazid reduces risk of progression of disease towards active and contagious forms by 75% to 90%. Nowadays, tuberculin skin test (TST) is the most widely used diagnostic test for LTBI that was first described by Koch in 1890 and developed by Mantoux in 1907. The TST is based on delayed hypersensitivity responses (DTH) of memory T cells to purified protein derivative (PPD) from M. bovis.

Tuberculin skin test is a simple and cost effective, and the world health organization (WHO) has approved the test for the recognition of prior exposure to M. tuberculosis. Sensitivity of the test in patients with positive culture for M. tuberculosis ranges between 70% and 90%, however, this test has low specificity with several disadvantages, including false-negative results, which may be common in immunosuppressed individuals, and very young or very old cases. False-positive results could be due to BCG-vaccinated people and in those, who are in contact with non-tuberculous mycobacteria. Other limitations are as follows, a need for a patient visit after PPD administration, inter-observer variability and disability in differentiating recent from latent infection. As a result, TST is not considered as a gold standard test (27, 28).

The low specificity of TST is related to the PPD used for TST that encompasses abundant antigens that are nearly the same as in BCG or non-tuberculous mycobacterium antigens, therefore more accurate tests, for detecting active tuberculosis is urgently needed (29). The current antigen is introduced for IGRAs to detect LTBI. The IGRA (IFN-γ) is a novel test based on the measurement of IFN-γ release from sensitized T cells in response to mycobacterial-specific antigens, which is used for tuberculosis diagnosis. Nowadays, ESAT-6, CFP-10, and tuberculosis 7.7 antigens are used in IGRA because they are extremely specific to M. tuberculosis. In these tests, the amount of interferon-gamma released from sensitized T lymphocytes are measured by T-SPOT.

In one study, Dessein et al. reported that native HBHA protein, purified from BCG, was used in IGRA test for detection LTBI in dialysis patients (33). This study showed that naive HBHA-IGRA compared to QFT is much more sensitive for the detection of LTBI. Hougardy et al. demonstrated that HBHA protein-based IGRA test could more efficiently detect latent infection (> 2 years) than tuberculosis gold in-tube (QFT-IT) test (31). In all previous studies, native HBHA protein was used and none of them evaluated the recombinant form (34).

Considering that HBHA protein has an important role in infectivity, pathogenesis, and detection of M. tuberculosis and the native HBHA protein elicits different immune responses compared to the recombinant form, this study produced a fusion protein (Mtb32C-HBHA) in the prokaryotic system. Many more studies would be required for identification of Mtb32C-HBHA utility for the detection of M. tuberculosis infection in latent patients.

This work was supported by a grant (No. 910016) from the Mashhad University of Medical Sciences. Roghayeh Teimourpour and Hadi peerdogaheh contributed equally in this study.

Copyright © 2018, Jundishapur Journal of Microbiology. This is an open-access article distributed under the terms of the Creative Commons Attribution-NonCommercial 4.0 International License (http://creativecommons.org/licenses/by-nc/4.0/) which permits copy and redistribute the material just in noncommercial usages, provided the original work is properly cited.
download pdf 752.63 KB Get Permission (article level) Import into EndNote Import into BibTex
Number of Comments: 0