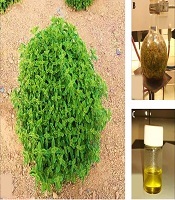 Plant essential oils (EOs) as natural agents have broad activities, including antibacterial, antifungal, antiviral, insecticidal, and repel activities because of their chemical compositions.

The objective of this study was to increase the stability of Origanum vulgar subsp. viride EOs by encapsulation in chitosan-carbomer nanoparticles by ionic gelation method.

The results confirmed the suitability of the CS-carbomer complex for OEO- CSNPs formation. It is recommended to evaluate the antimicrobial, insecticidal and insect repel activities of developed OEO nanoparticles in laboratory and field studies.

Plants essential oils (EOs) as natural agents are increasingly considered as potential and safe alternatives to chemical products in the medical, pharmaceutical, and agricultural fields. Essential oils have broad biological and antimicrobial activities, including antibacterial, antifungal, antiviral, insecticidal, and repellency activities due to chemical constituents, which are often made up of more than 100 different terpenic compounds (1-5). Most plant-based bioactive compounds are highly sensitive to environmental factors, including oxygen, light, and high temperature. They are volatile, evaporative, and unstable during preparation, utilization, and storage (2, 5-9).

The release rate of plant EOs is usually affected by environmental conditions such that too little release or excessive release causes inefficiency or uncomfortable feelings, respectively (9). Therefore, the development of new formulations that lead to the constant release of EOs under different environmental conditions has been represented over the last few years as an important challenge (9). The susceptibility and low stability of these bioactive compounds can be improved during processing, storage, and consumption using nanotechnology in the form of nanoparticles (NPs). This technology has been widely used in various industries, including food and nutraceutical industries, recently (3). The utilization of liposomes, nano-emulsions, lipid nanoparticles, and polymeric nanoparticles in nanostructure systems entails some advantages, such as improved drug efficacy and drug bioavailability, reduced adverse effects such as toxicity and irritation, and increased drug stability (10). Moreover, the formulation of EOs as nano-capsules preserves the active ingredients from the degradation by light and heat, which ultimately leads to an increase in its stability, half-life, and biological activity and provides the ability to sustain the release (8, 9, 11, 12). Nanocarriers can potentially protect plant EOs from oxidation and evaporation. In addition, the antimicrobial activity of EOs is facilitated by the various permeability properties of biological membranes due to the nano-scale of the particles (4, 8, 11). Polysaccharide compounds, including hydrogel and chitosan, are generally used for developing nanoparticles for drug delivery in medical and pharmaceutical fields, as well as in the form of pesticides and fertilizers in agriculture (1, 13). Many studies have been conducted to analyze plant EO components and develop appropriate formulations using nanoparticle technologies for increasing the effectiveness of EOs for in vivo applications (1, 3, 14-18). The encapsulation of Mentha piperita EOs in chitosan-cinnamic acid nanogel could affect stability and enhance antifungal activity of EOs against Aspergillus flavus (15). Oregano EOs were encapsulated in chitosan nanoparticles by a two-step method, i.e., oil-in-water emulsion and ionic gelation of chitosan with sodium tripolyphosphate (TPP), resulting in good characteristics of obtained nanoparticles (3).

The goal of this study was to develop a nano-capsule formulation containing Origanum vulgar subsp. viride using the chitosan-carbomer ion gelation method. Moreover, in the present work, OEO-loaded CSNPs were characterized by FTIR. The shape of NPs was determined by SEM. Also, LC, EE, the zeta potential of NPs, and release profiles of OEO from CS nanoparticles were investigated using UV-Vis spectrophotometry.

Chitosan with deacetylation degree of 97% and viscosity grade of < 25 cp was purchased from Primex (Iceland). Carbomer (Carbopol 940 NF) was obtained from Fluka (Switzerland). Glacial acetic acid, dichloromethane, and Tween 80 were supplied by Merck Chemicals Co. (Germany).

Origanum vulgar subsp. viride was collected from Ashkezar, Yazd Province (latitudes 53°59 and longitudes 31°50), Iran, in May 2017 (Figure 1). The essential oil was extracted from dried leaves by the hydro-distillation method using a Clevenger-type apparatus (Model BP, British Pharmacopoeia, Manufacturer Pyrex Fan Company, Iran) at 90 ± 5°C for 5 h and was stored at 4°C in dark conditions for experiments (19). 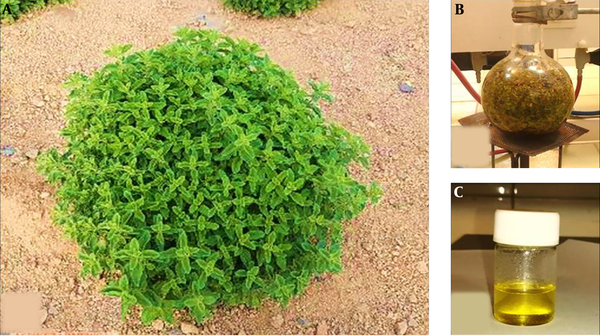 A, origanum vulgar subsp. viride; B, dried leaves in a 1 L flask; and C, extracted EOs

The essential oil yield (Y) of the oregano plant was calculated using the following formula (14):

The Ion Gelation method was used to prepare chitosan nanoparticles containing OEO. First, CS solution 1% (W/V) was prepared in acetic acid 1% (W/V) and then kept in a closed container under laboratory conditions (23°C - 25°C) for one day. The solution was then centrifuged at 20,000 rpm (model: Vs-35SMTi) for 30 min at 4°C. The supernatant was separated and filtered with filter paper. Afterward, 200 mg of Tween-80 was dissolved in 5 mL of each solution by a steamer heater at 45°C. Volumes of 80, 160, 240, or 320 µL of OEO were dissolved separately in 1 mL of dichloromethane and then added drop-wise to 5 mL of chitosan solution in the ice bath. The obtained emulsion was then added to 25 mL of 4% (W/V) carbomer as droplets in the ice bath (3). This process was performed three times. Figure 2 schematically demonstrates how to prepare OEO-loaded CSNPs. 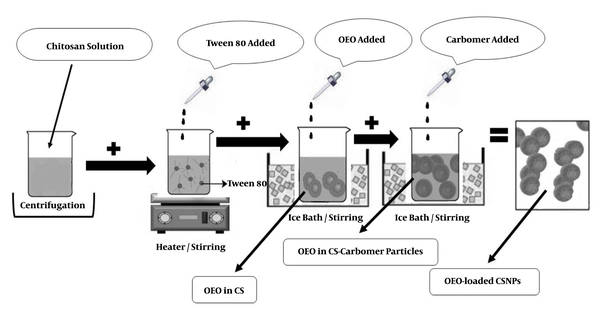 The encapsulation efficiency (EE) and loading capacity (LC) of OEO-loaded CSNPs were determined indirectly. The preparations were centrifuged at 20,000 rpm for 30 min at 4°C. The supernatant was then diluted to 1:10 with ethanol 96%, and the content of OEO was determined by a UV/Vis spectrophotometer (Biochrom, WPA, UK) at 275 nm. Calibration curves were prepared using the diluted supernatant of blank nanoparticles containing different concentrations of OEO in ethanol 96% (R2 = 0.995) (3). The EE was calculated using the following equation:

Also, to determine the LC, the precipitate from centrifugation was separated, dried, and weighed, and the LC was calculated according to the following equation:

First, OEO-loaded CSNPs were dispersed separately in ethanol, placed in a microtube, and centrifuged. Then, 5 mL of the supernatant was picked up. The release potential of the OEO-loaded CSNPs was investigated daily using a spectrophotometer at 275 nm for two weeks. The in vitro release studies were performed in triplicate (15).

In this study, EE%, LC%, and mean particle size of OEO-loaded chitosan nanoparticles were measured in triplicate, and the results were expressed as the mean ± standard deviation (SD). Statistical analysis of data was performed using one-way ANOVA, followed by Tukey’s test using SPSS ver. 20. Charts and graphs were plotted by Excel software (Microsoft Office 2013).

The yield of the oregano plant was 1% (V/W) of yellow EO extracted from the dry leaf by hydrostatic method (Figure 1C).

The average size of produced OEO capsules was in the nano-size range which varied from 134 nm to 181 nm depending on OEO volume (Table 3), which increased by increasing OEO content (P = 0.008). The results also showed that with increasing loading of OEO in chitosan nanoparticles, their sizes also increased (P = 0.019).

In addition, scanning electron microscopy was used to investigate the morphology of the nano-capsules produced. The results showed that the nano-capsules were spherical, regular, and uniform in shape and scattered throughout the solution (Figure 3A).

Table 4. Physicochemical Characterization of Blank CSNPs and OEO-Loaded CSNPs With CS to OEO Ratio (W/V) of 1:0.03 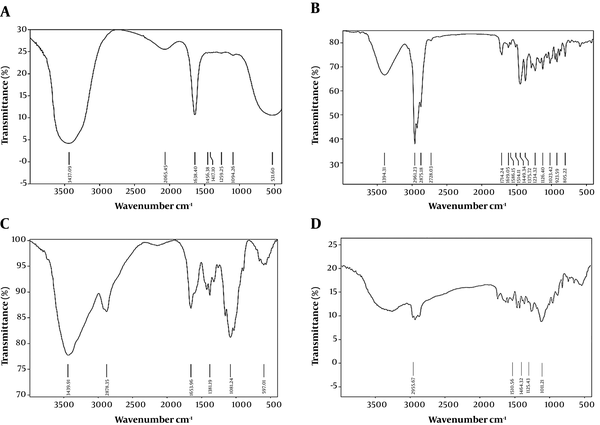 The release profiles of OEO-loaded formulations are shown in Figure 6. All formulations presented a prolonged release during two weeks. 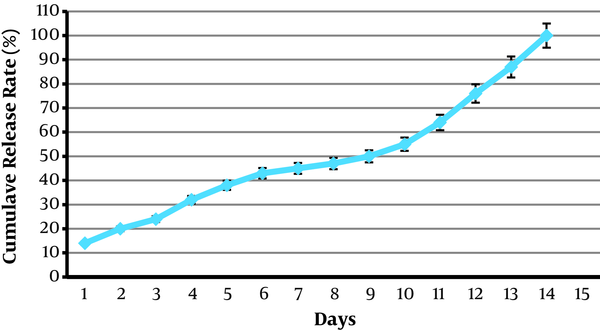 The unique features of CS, as a cationic polysaccharide, make it a functional substance to develop chitosan-based products, especially in agriculture, food, industry, biotechnology, and medical science (5, 15, 24). The SEM photographs of the obtained OEO-loaded nanoparticles showed regular, uniform, and spherical nanoparticles in shape and dispersion with particle sizes ranging from 134 to 181 nm. According to Hoesseini et al. (3), OEO nanoparticles exhibited regular distribution and spherical shape with a size range of 40 - 80 nm determined by AFM but the particle size varied from 309.8 to 402.2 nm by laser light scattering technique. The encapsulation of M. piperiata EOs in CS-Ci nanogel resulted in nanoparticle sizes of ≤ 100 nm. Several studies have documented that increasing loading of EOs in chitosan will result in nanoparticle size increase (3, 14, 25). The swelling of the chitosan layer surrounding particles and/or the aggregation of particles while dispersed in water might result in the larger diameter of chitosan nanoparticles.

Zeta potential values for blank CSNPs and OEO-loaded CSNPs were +23.4 and +38.5 mV, respectively, which led to good colloidal stability due to electrostatic repulsive interaction between nanoparticles (24, 26). The zeta potential values for chitosan nanomaterials ranged from +22 to +88 mV (24). Previous studies also confirm our findings (7, 27-29). Moreover, the mean particle size and PDI of OEO-loaded CSNPs were 104.1 nm and 0.876, respectively. In general, the CSNP mean particle size has been reported in the range of 40 - 500 nm previously (1, 3). The PDI value > 0.5 indicated that CSNPs had a broad size distribution (30).

The FTIR analysis indicated that OEO might be encapsulated into chitosan nanoparticles. Chitosan powder characteristic peaks were in agreement with previous studies (3, 13, 15, 31), and the interaction between EOs and CS was confirmed by previous studies (1, 3). The chitosan-carbomer complex is appropriate for entrapping and slow release of OEO. Beyki et al. (15) reported the sustained release of Mentha piperita EOs during four weeks, which agrees with our findings.

In this study, OEO-loaded CS nano-capsules were provided using the ionic gelation method. The size of the particles was below 200 nm with acceptable stability. The encapsulation efficiency was found more than 95%. As the OEO to chitosan weight ratio increased, LC% increased, while EE% decreased. The FTIR results confirmed the ionic complex between Cs and carbomer and demonstrated that OEO could be encapsulated into chitosan nanoparticles successfully. Moreover, the slow and sustainable in vitro release of OEO-CS nanoparticles during two weeks indicated that CS could be a potential candidate for the enhanced stability of plant EOs. The results confirmed the suitability of the CS-carbomer complex for OEO- CSNPs formation. Therefore, it will enhance the biomedical, pharmaceutical, and agricultural applications of these natural agents.

We would like to acknowledge the Department of Pharmacognosy, Ahvaz Jundishapur University of Medical Sciences, Iran, for the identification of the plant. We are grateful to Shahid Chamran University and Naft University for providing facilities to carry out the study.