The Effect of Eight Weeks of Endurance Training with Saffron on miR133bFC, miR29aFC in the Hippocampus Tissue and Depression in Rats with Alzheimer’s Disease 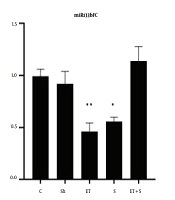 Recent studies indicate that deregulation of microRNAs (miRNAs) expression is associated with neurological and cognitive disorders, but physical activity and medicinal plants have favorable effects on physiological and psychological factors in these patients.

Therefore, we aimed to investigate the effect of endurance training (ET) with saffron (S) on miR133bFC, miR29aFC in the hippocampus tissue and depression of rats with Alzheimer’s disease (AD).

The prevalence of nervous system diseases and dementia increases with advancing age. Approximately 150 million people are predicted to have Alzheimer’s disease (AD) as a neurodegenerative disorder by 2050 (1, 2). Also, depression before and after AD affects a large number of patients (2, 3). microRNAs (miRNAs) have been recently found to bind to the 3’-untranslated region (UTR) of target mRNAs causing changes in their structure and function (4, 5)). mRNAs have been found to act as regulators of neuronal growth and differentiation, dendritic terminals morphology and neuronal plasticity, and their dysfunction is related to AD (5) and depression (6).

miR-29a, miR-29b-1, miR-9, miR-133, and miR-133b in the brain tissue are structural subunits for regulating the expression of serine palmitoyl transferase (SPT) long-chain subunit 1 (SPTLC1) and 2, and their decreased expression leads to increased ceramides and amyloid-β (Aβ) protein (7). Impaired miRNAs expression is also associated with psychological disorders in patients with AD, Parkinson’s disease, Huntington’s disease, and multiple sclerosis (8). In a study, increased miR-133 expression in the cardiac myocyte of animal models was reported to lead to severe depression and diabetes (9).

Exercise activities are nowadays suggested as a low-cost, non-invasive method for the prevention and treatment of cognitive and behavioral disorders (10), as exercise affects crucial cellular factors such as miRNAs. Although the precise mechanism of the effect of physical activity on miRNAs is not fully understood yet and contradictory results have been reported, exercise activities are known to modify miRNAs expression (11) and improve depression in AD patients (12). Twelve weeks of endurance training (ET) increased the expression of miR-1, miR-133a, miR-133b, and miR-206 in the muscle tissue of rats (13); interval swimming training increased the levels of 200 family miRNAs in the brain tissue of rats (14); 10 days of ET increased miR-1 and miR-29b and decreased miR-31 (15); however, 12 weeks of high-intensity interval training (HIIT) reduced miRNAs in the muscle tissue of non-athlete men. One exercise session increased the levels of miR-1, miR-133a, miR-133b, and miR-181a while increasing the levels of miR-9, miR-23a, miR-23b and miR-31 (15). Since most researchers consider the use of natural antioxidant diets along with exercise to be an essential factor in the treatment and prevention of diseases, saffron (S) as a strong antioxidant plant has been suggested in the treatment of many diseases such as diabetes, cardiovascular diseases, and AD (16), and it has been reported that S can improve AD- induced impairments.

Previous studies have shown antioxidant, anti-inflammatory, anti-apoptotic, anti-anxiety, and Aβ-reducing effects in the hippocampus, and positive effects on memory and learning in animal models (16, 17). Also, reduced anxiety in patients with mild to severe anxiety after the administration of S has been reported (18). Finally, the administration of 100 mg/kg of S improved the expression of miR-21 in patients with atherosclerosis (19).

Forty-eight hours after the last training session and S injection, all the rats were anesthetized by ketamine (50 mg/kg) (Rotexmedica Company, Germany) and xylazine (10 mg/kg) (Alfasan Company,, Netherlands) with 8 - 10 hours overnight fasting, and then the hippocampus tissue was extracted to measure the research variables.

The level of depression was measured using Forced swim test (FST). In this test, transparent cylindrical containers (diameter of 45 cm, height of 79 cm, temperature 23°C - 24°C [the temperature controlled by a waterproof thermometer]) filled with water to 30 cm were used. The test duration was five minutes, and the behavior of the rats was recorded during this time. Conventionally, the stopping of the hand and foot movement of the rat and its buoyancy were considered as immobilization, and the duration was considered as immobilization time. The animals were immersed in water for 15 minutes 24 hours prior to the test to obtain a forced swim experience (22).

The isolation of RNA molecules from frozen tissue was performed under strictly sterile conditions according to the RNase-free kit manufacturer’s instructions by TRIZOL reagent (Invitrogen, Cat. number, 15596026). After extraction of RNA, its quantity and quality were measured by UV spectrophotometry at 260 nm wavelength (Nanodrop; Thermo Fisher Scientific, Wilmington, DE, USA), and then it was stored at 80°C until cDNA synthesis. The cDNA was then synthesized using 1,000 ng total RNA in a first-strand cDNA synthesis reaction with the help of RevertAidTM First Strand cDNA Synthesis Kit (Thermo Fisher Scientific, Inc., Waltham, MA, USA).

For the quantitative analysis of expression level, SYBR green real-time PCR was performed using the ABI Biosystems StepOne and the RealQ Plus 2× Master Mix Green (Ampliqon A/S, Odense, Denmark). The primer sequence used was obtained from the NCBI site, and using the features on this site, specific primers were designed by miRprimer software. Then, after placing the samples in real-time PCR, the threshold expression cycles of each sample were recorded. To evaluate the relative expression of these genes, the target gene and internal control gene amplification efficiency was calculated using the 2-ΔΔCT formula. The sequence of primers used is shown in Table 1.

Table 1. The Sequence of Primers Designed for Each Gene

Shapiro-Wilk was used to investigate the normal distribution of the data, and one-way ANOVA and Tukey’s post- hoc test were used for statistical analysis of the data. A P-value of less than 0.05 was considered significant.

The levels of miR29aFC, miR133bFC and the mobility time of the rats in FST are presented in Figures 1-3, respectively. 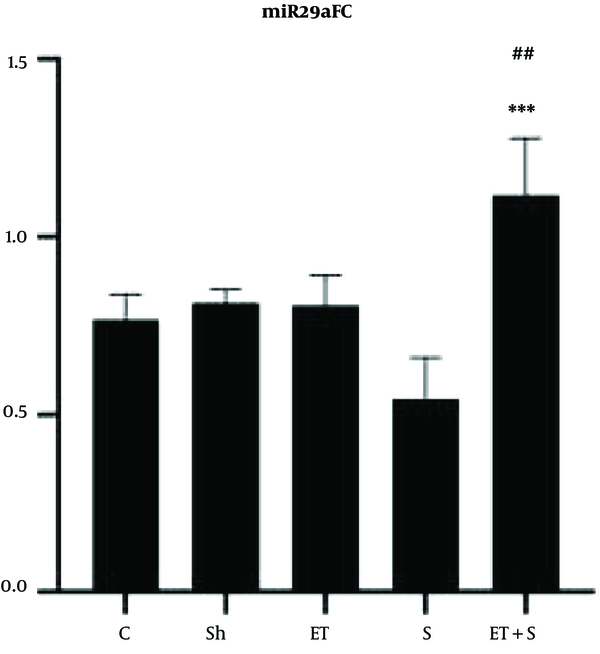 Figure 1. Levels of miR29aFC in the five study groups 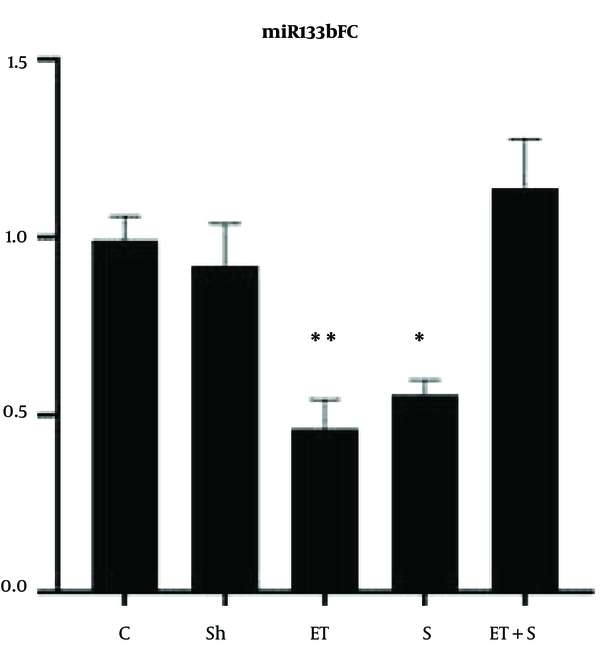 Figure 2. Levels of miR133bFC in the five study groups 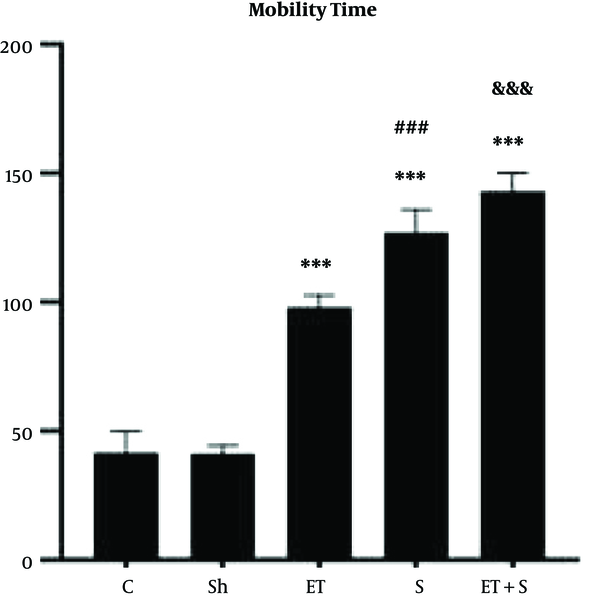 Figure 3. The mobility time in FST in the five study groups

The results showed that ET had no significant effect on the hippocampal expression of miR29aFC, but it decreased the hippocampal miR133bFC expression in rats with AD; however, ET significantly reduced depression in rats with AD. Alzheimer’s disease occurs with neuronal inflammation and cell death in different regions of the hippocampus that are responsible for memory and learning. Increased amyloid, oxidative stress, and plaques in neurons and cerebrospinal fluid are associated with the impaired expression of more than 60 miRNAs. Reactive oxygen species (ROS) by binding to proteins and miRNAs can damage their structure (7) and lead to amnesia, depression, and anxiety (7, 23). On the other hand, improving neuronal plasticity, increasing neurotrophins, modulation of dopamine to serotonin ratio, and increasing endorphins decrease depression (24). However, there is limited information on the association between depression and miRNAs and the effect of exercise on mRNAs. It is believed that exercise activates mRNAs through various mechanisms such as calcium/calmodulin, hypoxia, and changes in cellular energy charge (AMP/ATP ratio and NAD/NADH ratio) (25).

In response to altered cellular charge, the expression of metabolic proteins, such as gamma-peroxisome receptor 1-alpha (PGC-1α), sirtuin-1 (SIRT1), and PPARγ, activates nuclear transcription factor protein 1 and 2 (NRF1/2) and TFAM and improves mRNA expression, but upstream pathways of gene expression of these proteins are reported to be miR-107, miR-1, miR-181, and miR-133 (26-28). These mRNAs appear to be the precursors of neurotrophins such as BDNF, IGF-1, NGF, c-FOS, NTF3, NTF4 and VGF that increase in response to exercise (14).

Voluntary training in a mouse brain injury model increased the expressions of miR-21, miR-92a, and miR-874 in the brain tissue, but the levels of miR-138, let-7c, and miR-124 gene expression in healthy controls, brain injury controls, and exercise and brain injury groups decreased (29). However, the affectability of mRNAs expression appears to be dependent on the type and intensity of exercise and the effect of exercise on IGF-1 expression that activates protein synthesis pathways in the nucleus. In support of this hypothesis, in a study by Zhao et al. (14), the expression of neurotrophin precursor mRNAs and IGF-1 increased in the brain tissue of rats following intense swimming training. Consistent with the present study, four weeks of ET with the same intensity as the present study (at a speed of 10 to 15 m/min and a duration of 30 to 45 minutes) significantly increased miR-10b expression in the hippocampus tissue of ovariectomized rats (30). Also, circulating mRNA levels in subjects with chronic fatigue were not significantly correlated with depression, but exercise activity increased mRNA levels and decreased depression (31).

In the present study, the administration of S had no significant effect on the hippocampal miR29aFC expression changes, but it decreased miR133bFC levels and depression in rats with AD. Consumption of S and its constituents leads to decreased levels of depression through reducing oxidative stress, increasing antioxidants, increasing serotonin, improving neuronal function and plasticity, and diminishing pro-inflammatory cytokines (32).

In the same vein, in a meta-analysis, Hausenblas et al. showed that the administration of S had antidepressant effects (32). The antioxidant property of S activates the cAMP pathway, AMP-activated protein kinase results in the expression of nuclear transcription proteins and is involved in the translation process of RNAs. Saffron also regulates the expression of SNF2, t F-Box fork protein, DNA store keepers, RNA recognition motifs, and PPAR-α, activated protein-1 (AP1) and modulates mRNAs expression (19, 33).

The activation of PI3K/Akt and mitogen-activated protein kinase (MAPK) and the modulation of IGF1 and IGF2 expression also lead to the transcription of mRNAs (34). Previous studies have pointed to the role of miR29aFC in the development of neurogenesis in Parkinson’s disease (35), but a meta-analysis study suggested that miR133 depletion is associated with AD (34) and contributes to increased dopamine expression (36). Ahmadi Khatir et al. (19) reported that 100 mg/kg of S inhibited miR-21 and reduced the risk of atherosclerosis. It seems that investigating the effects of different doses of S on miRNAs still needs further research.

The results showed that the hippocampal expression of miR29aFC increased in the ET + S group, and the levels of depression in the ET + S group were more favorable than the ET and S groups alone; nevertheless, ET + S had no significant effect on the hippocampal changes of miR133Bfc. The effect of S consumption was also more desirable than ET on reducing depression. Studies show that exercise activities modulate miRNAs through IGF1/PI3K/AKT/mTOR pathway (11), calcium/calmodulin, and altered cellular energy charge (25); also, S consumption modulates mRNA expression through PI3K activation mechanism MAPK, PI3K/Akt and IGF1, and IGF2 expression (34), and cAMPregulation of SNF2 expression, F-Box fork protein, and DNA storekeepers and RNA recognition motifs, PPAR-α, and activated protein-1 (AP1) (19, 33).

Exercise and S consumption can also reduce depression (12, 25, 32) by increasing endorphins, modulating serotonin and dopamine, increasing neuronal plasticity and antioxidants, and reducing pro-inflammatory cytokines (12, 24, 32). Similar pathways of these two interventions seem to be able to increase the expression of miR29aFC in the hippocampal tissue of rats with AD.

Due to the effect of dopamine and serotonin on depression, one of the limitations of the present study is the lack of measurement of these two. Thus, it is suggested to examine depression and anxiety in addition to these two variables in future studies. Besides, considering the role of IGFs in the mechanism of mRNAs increase, lack of measurement of IGFs gene expression levels is another limitation of the present study; therefore, measurement of these variables is recommended in future studies.

It seems that ET and S consumption alone does not have the desired effects on mRNAs expression, but it decreases depression; however, the concurrence of these two interventions can have desirable effects on the expression of some mRNAs and reducing depression. However, further studies are needed in this regard.

This article was part of a doctoral dissertation approved by Sanandaj Islamic Azad University. We wish to appreciate the spiritual support of the Research and Technology Department of this university branch.