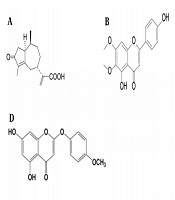 Artemisia genus and its chemical constituents show antiviral activity against different viruses. The aim of this study was to review the effects of selected Artemisia species and their components against respiratory viruses like influenza and coronavirus.

All the articles published in English or Persian related to the effects of Artemisia and its components on viral respiratory infections and relevant mechanisms of action were searched throughout Medline, Science Direct, Scopus, Ebsco, Google Scholar, and Cochrane Library Database from 1966 up to April 2020.

A few numbers of Artemisia species such as A. scoparia, A. rupestris, and A. annua and their components showed efficacy against the influenza virus and coronaviruses. Furthermore, some chemical compounds isolated from Artemisia species, like rupestonic acid, showed potent anti-influenza activity. The mechanism of antiviral activity was also determined for some of these compounds.

Influenza is an acute infectious disease caused by a number of viruses belonging to the orthomyxovirus family. Influenza epidemics may lead to morbidity and mortality in the elderly and other high-risk patients (3). There are different types of influenza viruses including influenza virus type A, B, and to a much lesser extent, C. Although respiratory viruses are responsible for a variety of health problems in humans, no considerable preventive or therapeutic interventions are currently available for their associated diseases. Herbal medicine has an important role in the prevention and treatment of viral respiratory infections (VRI). Some of these herbs have a long history in the traditional medicine practices of different countries for treating respiratory diseases. These plants are generally used by patients with the common cold, viral pharyngitis, acute bronchitis, influenza, etc. (4).

Artemisia is a genus of the Compositae (Asteraceae) family and harbors more than 500 species, called ‘Worm wood’, ‘Mug word’, or ‘Tarragon’ (5). It is mainly distributed in the temperate zones of Europe, Asia, and North America, but Asia has the greatest share of these species (6). Different species of the genus Artemisia contain various chemical compounds, mainly flavonoids, terpenoids, coumarins, caffeoylquinic acids, acetylenes, and sterols (6). Also, Artemisia species are considered as good sources for volatile oils (5). These plants have a wide range of bioactivities such as antimalarial, cytotoxic, antihepatotoxic, antibacterial, antifungal, anti-diabetic (7-10), antispasmodic (11), antioxidant, and antiviral activities (12-14). The antiviral activity of this genus has been investigated against the Herpes Simplex virus, Hepatitis B Virus, Bovine viral diarrhea virus, and respiratory viruses (15-18). On the other hand, different compounds of Artemisia species have revealed various biological activities such as antimalarial, antibacterial, and antiviral effects. Some of these compounds, such as cirsimaritin, have potent effects against respiratory viral infections (19). Another known compound of Artemisia, artemisinin, is a sesquiterpene lactone isolated from some Artemisia species like A. annua and a potent antimalarial drug by acting against Plasmodium falciparum. Artemisinin derivatives have also shown various biological activities against the influenza virus (20).

The present review emphasizes the effects of Artemisia species and their components on viral respiratory infections (VRIs) and investigates their antiviral mechanisms. Also, this study suggests researchers to investigate the impacts of this genus and its active compounds against other viruses causing VRIs, like coronaviruses.

All the articles published in English or Persian, related to the efficacy and mechanisms of action of Artemisia species and their components in managing VRIs were searched in the Medline, Science Direct, Embase, Scopus, Ebsco, Google Scholar, and Cochrane Library databases from 1966 up to April 2020. The main keywords were Artemisia, viral, respiratory, influenza, coronavirus, component, mechanism, and infection.

According to the findings, different Artemisia species and their components showed potent antiviral activities against respiratory viruses such as the influenza virus and coronavirus (Table 1).

Table 1. Artemisia Species and Their Constituents Against Respiratory Viruses

Artemisia genus (Afsantin in Persian medicine) is known to have a hot and dry temperament in traditional medicine. Total heat produced by the extracts of this genus is greater than the whole plant, flowers, or seeds. They can dilate the blood vessels or dissolve thick or viscous matter to remove the obstruction (called "Mofatteh" in Persian medicine), show astringent, diuretic, appetizer, diaphoretic, and larvicidal effects, and purge serous bile that is collected in the stomach and strengthen the stomach. Avicenna believed that it is the best choice for treating gastric disorders, but it may cause headaches in susceptible patients (especially those with a hot temperament) and it can liquefies thick and viscous matters (called "Molattef" in Persian medicine) (25).

Artemisia has antipyretic effect and its decoction is a solution to chronic and compound fevers, intermittent fever, malaria fever, and phlegmatic disorders and can cleanse chest and lung vessels. It is also beneficial for cold, bronchitis, and influenza (26).

Artemisia scoparia is one of the plants used in traditional Chinese medicine to prevent and treat fever, cough, and cold. Recent studies have shown that it has inhibitory activities against several influenza virus strains. Wang et al. (27) confirmed the in vitro and in vivo antiviral effects of A. scoparia extracts and determined their mechanisms of action against the influenza virus. They reported that Artemisia extract effectively intervened in influenza virus replication, decreased the activity of influenza virus neuraminidase, and reduced the expressions of the hemagglutinin and M2 proteins (27).

Yan et al. (24) concluded that cirsimaritin could reduce IAV titer and its RNA and protein synthesis in a dose-dependent manner. Also, cirsimaritin promoted its anti-IAV activity via downregulating the phosphorylation of MAPKs (p38 and JNK) and suppressing the NF-kB signaling pathway, leading to a reduction in inflammatory cytokines such as IL-1β, IL-8, IL-10, and TNF-α (27).

Artemisia afra is one of the plants commonly used in the traditional medicine of South Africa to treat different illnesses such as coughs and colds, as well as sore throat and flus. Most commonly, A. afra fresh leaves are inserted into the nostrils to clear blocked nasal passages (31).

Artemisia rupestris L. is a perennial herb growing in China and also central Asian countries. It is used to treat colds in folk medicine (32). Zhang et al. (33) showed that the aqueous extract of A. rupestris could be an efficient adjuvant for influenza virus vaccines to boost immune responses and reduce the antigen doses required for triggering the immune system (33).

Rupestonic acid is a sesquiterpene isolated from A. rupestris, including multifunctional groups. It can inhibit the influenza virus to a moderate extent (23). In a study, a group of 2-substituted rupestonic acid methyl esters was synthesized to investigate their effects against the influenza virus, revealing potent activities against the 3b and 3c strains of the influenza H1N1 virus with the half-maximal inhibitory (IC50) concentrations of 2.12 and 1.71 µM, respectively (Figure 1) (23). 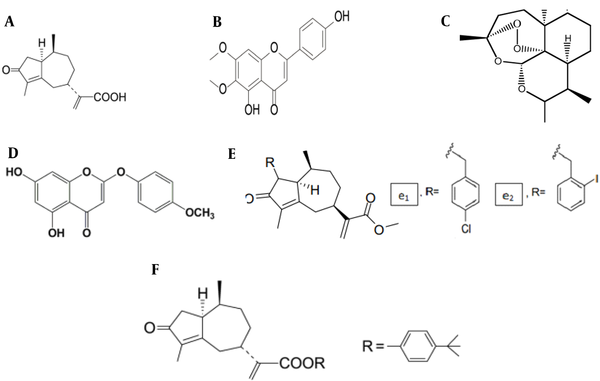 In another study, the fatty ester and aromatic ester derivatives of rupestonic acid showed significant antiviral activities against the A3 and B strains of the influenza virus. The highest inhibitory effect was observed against the influenza A3 virus (IC50 = 0.5 µmol/L) in exposure to one of the aromatic ester compounds, which was almost 10-fold higher than that of the reference drug, oseltamivir (Figure 1) (3).

The flavonoids extracted from A. rupestris showed inhibitory effects against viral infections. The antiviral properties of one of these flavonoids, 6-demethoxy-4’-O-methylcapillarisin (DMO-CAP), and its antiviral mechanism were studied against the IAV. Western blot analysis, qRT-PCR, and the luciferase assay were used to investigate the antiviral mechanisms of DMO-CAP against the IAV. According to the results, DMO-CAP revealed significant antiviral activities against the IAV in vitro by suppressing its replication via activating the Nrf2/heme-oxygenase-1 (HO-1) pathway. Subsequent to the up-regulation of HO-1 expression, the stimulation of the interferon (IFN) response induced the expression of IFN-stimulated genes, leading to efficient anti-IAV effects (22).

Li et al. (21) screened some herbal extracts against the SARS-COV, using the 3-(4,5-dimethylthiazol-2-yl)-5-(3-carboxymethoxyphenyl)-2-(4-sulfophenyl)-2H-tetrazolium inner salt (MTS) assay for the cytopathic effect (CPE) induced by the virus. The results showed that some of these extracts, including the components extracted from A. annua L., showed antiviral activity against the SARS-CoV in a Vero cell-based CPE/MTS screening assay. The half-maximal effective concentration (EC50) and 50% cytotoxic concentration (CC50) of the ethanolic extract were 34.5 ± 2.6 and 1035.0 ± 92.8 mg/mL, respectively (21).

Artemisinin (a sesquiterpene lactone) is an active constituent of A. annua, discovered in 1970. Due to artemisinin poor solubility in water and oil, its semisynthetic derivatives have been designed in appropriate formulations (20). The effect of dihydroartemisenin was studied against the influenza A virus, verifying its ability to inhibit the IAV by inducing the expression of tumor necrosis factor-α (TNF-α) and interleukin 6 (IL-6) in bronchial epithelial (BEAS-2B) cells through the extracellular signal-regulated kinase signaling pathway. The mRNA expression levels of TNF-α and IL-6, as well as the protein levels of TNF-α, IL-6, and phospho-ERK (p-ERK) were significantly up-regulated in the IAV group compared to the normal control group (P < 0.05). Likewise, a dose-dependent reduction in the mRNA levels of IL-6 and TNF-α and protein levels of TNF-α, IL-6, and p-ERK protein was seen in the IAV + dihydroartemisenin group compared to the IAV group (P < 0.05) (34).

Copyright © 2021, Author(s). This is an open-access article distributed under the terms of the Creative Commons Attribution-NonCommercial 4.0 International License (http://creativecommons.org/licenses/by-nc/4.0/) which permits copy and redistribute the material just in noncommercial usages, provided the original work is properly cited.
download pdf 447.39 KB Abstract XML Get Permission (article level) Import into EndNote Import into BibTex
Number of Comments: 0