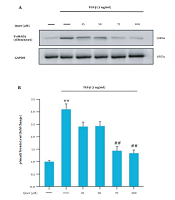 Liver fibrosis has become one of the leading causes of morbidity and mortality in the world. Liver fibrosis progresses to cirrhosis and can eventually lead to hepatocellular carcinoma (HCC). During fibrogenesis, the hepatic stellate cells (HSCs) remain active and continuously produce more extracellular matrix (ECM). Quercetin, one of the main flavonoids in vegetables, has shown hepatoprotective potential, but its effects on liver fibrosis are not apparent.

In this study, we investigated the antifibrotic activity of quercetin following stimulation of TGF-β in the LX-2 cell line (a type of HSC-derived cell line) and its underlying mechanism in vitro.

The results showed that the expression of α-SMA, collagen 1α1 (COL1α1) genes, and also the level of p-Smad3 protein in the presence of TGF-β increased significantly compared to the control group. Moreover, quercetin in concentrations of 75 and 100 μM inhibited TGF-β1-induced expression of α-SMA and COL1α1 genes and the p-Smad3 protein in LX-2 cells.

We conclude that quercetin inhibits further activation of HSCs by inhibiting the TGF-β/Smad3 signaling pathway and reduces ECM accumulation during liver fibrosis in vitro, and may prevent the progression of liver fibrosis. Thus, the use of quercetin is suggested as a potential therapeutic agent in the treatment of liver fibrosis.

Liver fibrosis has become one of the important causes of morbidity and mortality in the world. Following liver damage, hepatic stellate cells (HSCs) are activated, which are important sources of extracellular matrix (ECM) production. Liver fibrosis progresses to cirrhosis and can eventually lead to hepatocellular carcinoma (HCC) (1, 2). Several factors can activate HSCs and contribute to the progression of liver fibrosis, including alcohol consumption, drug abuse, hepatitis virus infection, and growth factors (3).

Among the growth factors, transforming growth factor (TGF-β) plays an important role during the HSCs activation. Dysregulation of TGF-β signaling pathways contributes to the progression of liver fibrosis (4). TGF-β participates in the liver fibrosis processes by enhancing the synthesis of collagen type 1 and other ECM proteins (5). Smad proteins are intracellular mediators of the TGF-β signaling pathway that demonstrate important roles in this pathway (6, 7). During fibrogenesis, the HSCs remain active and continuously produce more ECM. The accumulation of excessive matrix is associated with an insufficiency of liver function and predisposition to the expansion of HCC (8). For this reason, new therapeutic approaches are considered to prevent the progression of liver fibrosis by returning HSCs from an active to inactive state (9).

Nowadays, there are new methods for reducing the severity of liver fibrosis, such as targeting kinase receptors and degradation of the ECM proteins. Therefore, the study of the effect of drugs for the treatment of liver fibrosis and accurate knowledge of signaling pathways in the progression of liver fibrosis can help find the best ways to reduce and treat this disease. Finding and implementing appropriate therapies remain a severe challenge for science (9, 10).

Quercetin (3, 3’, 4’, 5, 7‑pentahydroxyflavone) belongs to the flavonols class that cannot produce in the human body. Quercetin is the most common bioflavonoid in vegetables. It is known for its antioxidant properties, anti-inflammatory effects, anti-hypertensive, vasodilating effects, anti-hypercholesterolemic (11), anti-carcinogenic, anti-viral, inhibition of lipid peroxidation, and platelet aggregation (12). Quercetin can reduce inflammatory cytokines, such as IL-1β, and alleviate metabolic and inflammatory disorders (13).

Treatment with quercetin dramatically suppressed NF-κB activation in mice. Moreover, quercetin attenuated reactive oxygen species production, mitochondrial dysfunction, and cell death (14). However, the ability of quercetin to prevent the progression of liver fibrosis as an inhibitor of some signaling pathways involved in fibrosis, has not been fully investigated.

The LX-2 cells, gifted by Professor Scott Friedman, were cultured in DMEM Low Glucose, containing 10% FBS in a 5% CO2 atmosphere at 37°C. After starvation, the cells were treated with TGF-β1 (2 ng/mL) for 24 h (15). To prepare quercetin solution, a certain amount of quercetin was dissolved in DMSO according to the manufacturer's instructions and stored at −20°C. Then different concentrations were added to the cell culture medium.

Cell viability was evaluated using the MTT assay. The LX-2 cells were dispensed into 96 well plates in 5,000 cells/well and incubated for 24 h at 37°C to allow attachment. When the LX-2 cells reached 80 - 90% confluency, the medium was treated with a complete medium consisting of different concentrations of quercetin (25, 50, 75, 100, 125, and 150 μM) for 24h (16). After removing the supernatant, the cells were incubated with MTT (5 mg/mL in PBS) for 4 h. After that, DMSO was added to dissolve the formazan crystals formed, and the absorbance was read at 570 nm by an ELISA plate reader. The results were expressed as a percent of the untreated control. Each different concentration was repeated in triplicate.

Cells were lysed in RIPA lysis buffer for 20 min at 4°C. After that, total protein concentration was measured using a BCA protein detection kit (Parstous, Iran). Equal amounts of extracted protein samples were loaded onto a 10% SDS-PAGE gel and transferred onto polyvinylidene fluoride (PVDF) membranes (Millipore, USA). After blocking with 5% bovine serum albumin at room temperature for 1 h, the membrane was incubated in anti-Smad3 or anti-GAPDH antibody with a gentle shaking overnight at 4°C. Then, the membrane were incubated with the appropriate horseradish peroxidase-conjugated secondary antibody at room temperature. Subsequently, PVDF membrane was incubated with an ECL system for detecting signals on a ChemiDoc device. Image J software was used to calculate the expression of each protein.

All experiments were performed with three replications. The data were analyzed as (means ± SEM) using ANOVA and Tukey post hoc test with Prism 9 software. The significance level was considered P < 0.05.

4.1. The Effect of Quercetin on the Survival of HSCs

To evaluate the expression of α-smooth muscle actin (α-SMA) and collagen 1α1 (COL1α1), the cells were incubated with a concentration of 2 ng/mL TGF-β for 24 hours. The expression levels of α-SMA and COL1α1 were increased compared to the control group (P < 0.01). Then the cells were treated for 24 h with concentrations of 25, 50, 75, and 100 μM of quercetin. The expression levels of α-SMA and COL1α1 in the presence of quercetin were significantly reduced compared to the TGF-β group (Figure 2A and B).

To investigate the relationship between quercetin and the TGF-β/Smad3C signaling pathway in HSCs, at first, the cells were treated with concentrations of 25, 50, 75, and 100 μM of quercetin for 30 min; then, the cells were treated with a concentration of 2 ng/mL TGF-β for 30 min. Compared to the control group, the level of phosphorylation of Smad3C (p-Smad3C) in the TGF-β group increased significantly. Also, quercetin significantly inhibited the increase in the p-Smad3C levels compared to the TGF-β group (Figure 3A and B). 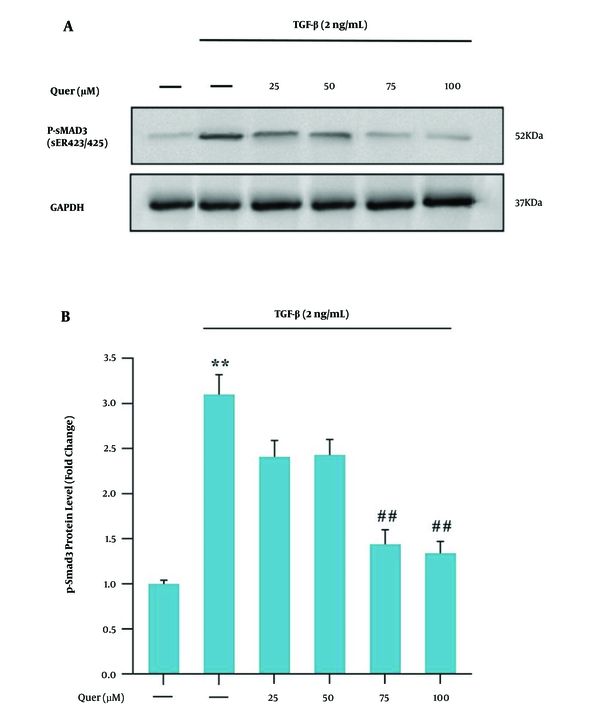 A, western blot analysis of Smad3C expressions in LX-2 cells. LX-2 cells were treated with different quercetin concentrations for 30 min before being incubated with concentrations of 2 ng/mL TGF-β for 30 min, the cell lysates were immunoblotted; B, the relative Smad3C level. The relative Smad3C level were expressed as the ratio Smad3C/GAPDH. The bands were analyzed with ImageJ software. The data were performed using one-way analysis of variance (ANOVA), followed by the Tukey's test. Data represent the mean ± SEM of three replicates (**P < 0.01 vs vehicle-treated control; ##P < 0.01 vs TGF-β alone).

Liver fibrosis is one of the main causes of mortality in chronic liver disease due to hepatocyte damage and activation of HSCs (17). In the progression of liver fibrogenesis, activated HSCs play an important role as the main source of ECM production in the liver (18). Increasing evidence suggests that TGF-β1 is a crucial mediator by activating its downstream Smad signaling pathway in the pathogenesis of liver fibrosis (19). Excessive TGFβ1 expression leads to HSC activation and collagen deposition in the liver, thereby giving significant evidence for the stimulatory role of TGF-β1 in liver fibrogenesis (20).

Currently, the lack of effective antifibrotic drugs in the prevention and treatment of liver fibrosis is a major global problem. Therefore, many studies are conducted to find effective and promising hepatic antifibrotic agents (17). Quercetin is a natural flavonoid that has strong antioxidant properties and activates superoxide dismutase and catalase. Quercetin exhibits many biological activities including, anti-inflammatory and liver protection. Previous studies have evaluated the effects of quercetin on liver fibrosis, but its impacts on signaling pathways are not apparent (21). This study aimed to investigate the antifibrotic effects of quercetin and its role in the TGF-β1 signaling pathway in a model of induced hepatic fibrosis with TGF-β1.

We evaluated collagen synthesis and activated HSCs markers by measuring the mRNA expression levels of COL1α1 and α-SMA genes, respectively. We found that the expression levels of these fibrogenic markers were significantly lower than the control group compared to quercetin treatments (Figure 2A and B). As shown in our study, phosphorylation of Smad3 (p-Smad3) protein was significantly increased in the LX-2 by TGF-β1, but it was reduced by quercetin (Figure 3A and B). The underlying molecular mechanisms for the effect of quercetin involved inhibition of HSCs activation and reduced expression of α-SMA and COL1α1, resulting from blocking TGF-β1/Smad signaling. According to our study, the study of Wu et al. reported that quercetin could inhibit HSCs activity and possibly decrease autophagy by affecting the TGF-β1/Smad signaling pathway. The productions of ECM, collagen I, and α-SMA are inhibited (22). These data are in agreement with the results of studies that quercetin treatment inhibits HSC activation and the expression of collagen, TGF-β1, and a-SMA markers in vivo (23).

The study of Yang et al. suggested that isorhamine (the 3′-O-methylated metabolite of quercetin) inhibits the TGF-β/Smad signaling pathway and relieves oxidative stress. Therefore, it prevents the activation of HSC and prevents liver fibrosis (24). Studies have also shown that the addition of methyl group to on functionally important position can increase the antifibrotic effect of quercetin in the treatment of liver fibrosis (25).

As expected, COL1α1, α-SMA mRNA, and p-Smad3 protein were upregulated in LX-2 cell line induced by 2 ng/mL TGF-β for 24 h, while all were suppressed by quercetin treatment. These data are consistent with the observations of Li et al., who showed that quercetin treatment inhibited HSC activity in vitro by affecting the expression of COL1α1, TGF-β1, and α-SMA markers (26). In the present study, quercetin in concentrations of 75 and 100 μM inhibited TGF-β1-induced expression of α-SMA and COL1α1 in LX-2 cell line. Hence, the inhibitory effect of quercetin in liver fibrosis may be closely related to decreasing TGF-β production because the expression of TGF-β in the HSCs was regulated by Smad2/3 phosphorylation. Quercetin has been shown to inhibit the p-Smad3 and finally TGF-β signaling pathway, which is consistent with other studies (22).

As a result, the data suggested that the possible mechanism of inhibition of liver fibrosis by the quercetin is due to the direct regulation of TGF-β/p-Smad3 signaling pathway. Thus, suppression of TGF-β expression may improve hepatic fibrosis, and its mechanism of action is through the TGF-β/Smad3 signaling pathway. In summary, treatment with quercetin ultimately may inhibit the activation of HSCs in vitro.

This study was supported by the Ahvaz Jundishapur University of Medical Sciences (grant No. 99s65). The funding source has no role in the design of the study, analysis, and interpretation of data, and publication of the manuscript.

Copyright © 2021, Author(s). This is an open-access article distributed under the terms of the Creative Commons Attribution-NonCommercial 4.0 International License (http://creativecommons.org/licenses/by-nc/4.0/) which permits copy and redistribute the material just in noncommercial usages, provided the original work is properly cited.
download pdf 898.89 KB Get Permission (article level) Import into EndNote Import into BibTex
Number of Comments: 0