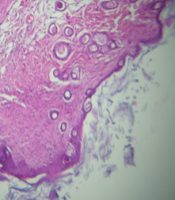 Burns are one of the most common injuries; however, there are few medications to repair burned skin. Although antibacterial drugs such as topical silver sulfadiazine may prevent wound infections, they usually cannot accelerate skin healing. Marshmallow (Althaea officinalis L.) has long been used in Iranian traditional medicine to deal with skin burns.

The present study aimed to evaluate the effect of hydroalcoholic and aqueous extract of A. officinalis on the histopathologic parameters of second-degree burns in mice.

The mice were randomly divided into nine groups (n = 6), including control and treatment groups. Experimental second-degree burns were induced on the dorsal skin of the mice by a metal plate (2 cm in diameter) under general anesthesia. Control and treatment groups were treated twice a day for 21 days topically. Normal saline was used for the control group, and hydroalcoholic and aqueous extracts of A. officinalis in three concentrations (1%, 2%, and 4%) were used for the treatment groups. All preparations were made in a hydrogel base. Finally, the histopathological parameters of the burned skin, including polymorphonuclear (PMN) migration, epithelialization, angiogenesis, and collagenization, were scored, and the total score of wound healing was calculated.

The findings showed that topical application of hydroalcoholic or aqueous extracts of A. officinalis accelerated the wound healing process. They reduced PMN migration, collagenization, epithelialization, and angiogenesis scores compared to the control group. There was a significant difference between the 4% hydroalcoholic extract group and the normal saline group.

Althaea officinalis may have been used as an adjunct medication to accelerate wound healing in skin burns.

Burns are one of the most common injuries. More than 6.6 million people are estimated to suffer from burns worldwide (1). Burns are usually classified according to their severity and weakness. When skin damage involves the dermis in addition to the epidermis, it causes second-degree burns, and when all layers of the skin are damaged, third-degree burns occur (2). Skin is a protective barrier against microorganisms and harmful substances (3). This barrier is most effective when it is not damaged. The skin is constantly renewed by shedding dead cells and producing new cells. Superficial cells that are lost due to wear, damage, or disease are rapidly replaced. Following damage to the skin, the lower layer cells of the dermis begin to build collagen and repair the epithelial cells (4). Injured skin may be infected by cutaneous flora and other pathogens. Although antibacterial medications such as topical silver sulfadiazine may prevent wound infections, they usually cannot accelerate skin healing (5). Accordingly, it is crucial to identify therapeutic agents for a faster repair of the dermis and epidermis against skin damage. Using medicinal plants has been recently welcomed to medicine for therapeutic purposes (6). The pectin in Althaea officinalis has an immune-stimulating and wound-healing effect (7). Its effectiveness in treating skin diseases such as eczema has been reported to result from its phagocytosis and macrophage activation (8).

The present study aimed to investigate the effects of aqueous and hydroalcoholic extracts of A. officinalis on reducing inflammation and accelerate the wound healing process.

Male NMRI mice (25 - 30 g, two months old) were purchased from the animal house of the School of Pharmacy, Shahid Sadoughi University of Medical Sciences, Yazd, Iran. The animals were housed in groups of six in standard laboratory conditions at 18 to 23°C and 40 - 60% humidity, and they were kept in separated cages for 12 hours, light/dark cycle, and free access to standard food and tap water. All mice were observed according to the animal rights ethics protocol of Yazd Shahid Sadoughi University of Medical Sciences (IR.SSU.MEDICINE.REC.1398.055).

3.2. Preparation of the Extracts

The dried A. officinalis flowers were obtained from Yazd medicinal plants market. The scientific name and the quality were confirmed with a quality assurance number obtained from the School of Pharmacy, Shahid Sadoughi University of Medical Sciences (SSU0042). The flowers were ground and powdered, and then, the hydroalcoholic extraction was performed during four weeks of powder percolation (100 g) in ethanol (Nasr, Iran) (1: 10) using a perculator (GENIRAN, Iran) (9).

The aqueous extraction was performed adopting infusion method (10). One hundred grams of plant flowers were ground, powdered, and moistened with water at a ratio of 3 to 1. Afterwards it was placed on Ben Marie at 90 degrees for 5 minutes and stirred constantly. The lid was covered and placed at 30°C for 30 minutes. It was then passed through a strainer.

The dried aqueous and hydroalcoholic extracts were used to prepare the hydrogels (1, 2, and 4 percent) containing 2% polymeric dry matter, including 40% hydroxypropyl methylcellulose 40% methylcellulose, and 20% hydroxyethylcellulose. Then, five percent propylene glycol was added to the hydrogel to improve its rheological properties.

Total flavonoid compounds were measured employing the catechin method (12). Three concentrations of the hydroalcoholic extract were prepared in distilled water, including 0.1, 0.01, and 0.001 μg/mL in three separated tubes (1.5 mL). Then 300 μL of sodium nitrite (Merck, Germany) 5% was added into the blank and test tubes. After 5 minutes, 300 μL aluminum chloride (Merck, Germany) 10% followed by 2 mL NaOH 1 M was added and distilled to 100 mL. The absorbances were observed at 510 nm by a spectrophotometer device.

Burn induction was performed according to the Shanmoga method with modifications (13). The dorsal skin of the mice was burned by a metal plate (2 cm in diameter) under general anesthesia following i.p. injection of ketamine (50 mg/kg) and xylazine (10 mg/kg). According to the histopathological parameters, the best temperature for induction of the second-degree burns was determined as 120°C for 3-seconds contact time.

The mice were randomly divided into nine groups (n-6), including the control group (received normal saline, topically), topical hydroalcoholic, and aqueous Althaea extract groups (1, 2, and 4 percent), topical phenytoin 1% group, and topical hydrogel group. Following the burn induction, the animals were kept in separated cages with free access to food and water and treated twice daily for 21 days. They were weighed weekly. Finally, the mice were sacrificed, and the entire layer of the burned skin was separated and maintained in a formalin 10% solution for histopathological evaluations.

The histopathological parameters, including epithelialization, PMN migration, collagen formation, and angiogenesis were scored under an optic microscope, double-blindly.

Data were analyzed by one-way ANOVA followed by Tukey’s post hoc test, and were expressed as mean ± SEM All statistical analyses were performed by using SPSS software (version 19).

The following formula was used to calculate the total phenolic content of the extract as 7.183 μg/mL:

The total flavonoid content of the extract was calculated by the following formula as 26.66 μg/mL:

There wasn’t any significant variation in animals’ weight during the study period. Their behaviors in all groups were normal since the second day of burn induction.

The histopathological alteration of second-degree burned skin after 21 days of treatment is presented in Figure 1. 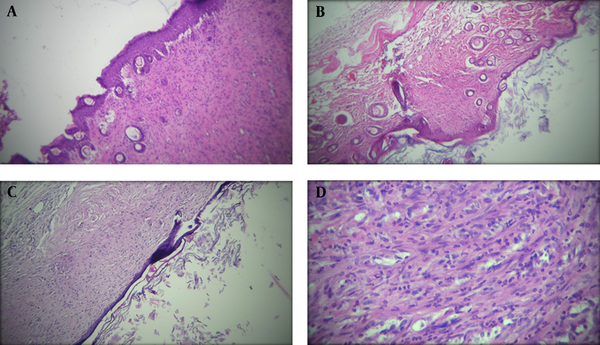 Polymorphonuclear migration in the hydroalcoholic extract 4% and the aqueous extract 4% were significantly decreased compared to those of the control group (P < 0.05) (Figure 2).

Collagenization in the treated groups with the hydroalcoholic extracts (1%, 2%, and 4%) and the aqueous extracts (1% and 4%) were equal. There was a significant difference between these groups and the control group regarding collagen formation (P < 0.01) (Figure 3).

The total score was calculated as a summation of the scores of all parameters, including collagen formation, PMNs migration, angiogenesis, and epithelialization.

The total score in the second-degree burn was suggestive of a significant difference between the hydroalcoholic extract 4% group and the normal saline group (P < 0.05) (Figure 6). 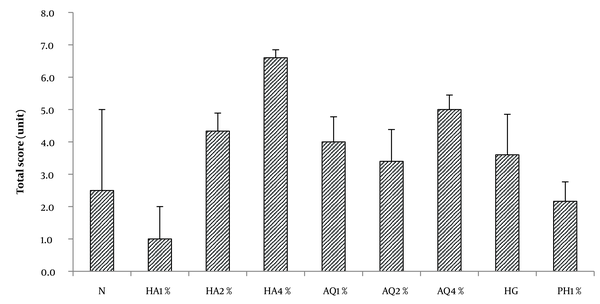 The histopathologic effects of topical hydroalcoholic and aqueous extracts of A. officinalis flowers (1%, 2%, and 4%) on second-degree skin burns in mice were explored. The effects of the extracts on hydrogel base and control (normal saline) groups were compared. Phenytoin, 1% cream, was selected as a standard group. To follow the wound healing process, histopathologic variables of PMN migration, collagen formation, angiogenesis, and epithelialization were measured. The results showed that hydroalcoholic extract (4%) of A. officinalis was capable of repairing skin injury in second-degree burns.

Phenolic compounds and flavonoids are secondary metabolites in plants with important properties such as antioxidant, anti-inflammatory, and antimicrobial effects (14). These features are effective in the wound healing process. The impact of phenols in treating skin diseases, skin aging, and skin injuries, including scars and burns, has already been confirmed. They reduce the duration of wound healing (15). Flavonoids facilitate the regeneration of epithelial cells by inducing a contraction in the wound site. Flavonoids are also considered to be a factor in collagenization (16). Valizadeh et al. determined that the mucilage in A. officinalis may have healed wounds (17). Previous studies have shown that A. officinalis produces antimicrobial effects due to its phenolic compounds and flavonoids, which inhibit the growth of microorganisms and infection (16, 18). Althaea officinalis has potent anti-inflammatory and antioxidant effects due to its alpha-tocopherol content and increased mucin secretion (19). Therefore, it can be concluded that the hydroalcoholic extract of this plant may improve the healing process of non-infectious wounds by reducing inflammation by removing free radicals and oxidants (16). The aqueous extract of this plant stimulates phagocytosis and releases oxygen radicals and leukotriene from human neutrophils. These features hastens the wound healing process. Althaea officinalis increases the production of interleukin-6, which results from the proliferation of epidermal cells (19). The antioxidant properties of the A. officinalis have been attributed to its compounds, such as flavonoids, mucilage, and pectin (20). Therefore, it is predicted that the wound healing process at the epidermis and dermis levels is related to the traits mentioned above in the flower extract. However, this study showed that A. officinalis extract significantly reduced the dermis and epidermis damage compared to the control group.

It was concluded that A. officinalis extract (4%) positively affected the wound healing process in second-degree burns. Considering the antibacterial effects of A. officinalis, it was recommended that this plant be used to deal with skin burns.

Copyright © 2023, Author(s). This is an open-access article distributed under the terms of the Creative Commons Attribution-NonCommercial 4.0 International License (http://creativecommons.org/licenses/by-nc/4.0/) which permits copy and redistribute the material just in noncommercial usages, provided the original work is properly cited.
download pdf 4.65 MB Get Permission (article level) Import into EndNote Import into BibTex
Number of Comments: 0