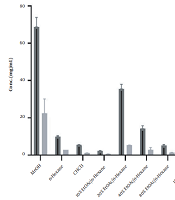 Malaria is one of the most momentous transmittable diseases globally. Medicinal herbs like Artemisia species might be possible sources of new, effective, and cheap antiplasmodial products, making up the leading molecules to investigate new antimalarial drugs. The Artemisia genus, which belongs to the Asteraceae family, is a widely distributed medicinal plant in Iran.

In this study, the antimalarial activities of essential oil, different extracts, and vacuum liquid chromatography (VLC) fractions of A. fragrans Willd. were examined by a cell-free β-hematin formation assay. The aerial parts of A. fragrans were extracted by a Soxhlet extractor, and essential oil was obtained by a Clevenger apparatus. Then, GC-MS analysis was used to identify volatile compounds of essential oil and the 100% VLC fraction of chloroform.

The 100% ethyl acetate fraction of chloroform extract along with the essential oil of A. fragrans indicated potent and moderate activity, possibly due to sesquiterpenes and oxygenated monoterpenes, respectively.

Malaria is one of the most momentous transmittable illnesses globally. It is the primary controversial issue in areas where the risk of malaria is high. According to the WHO report, malaria caused 429,000 deaths in 2015, and new malaria cases are predicted at approximately 212 million. Malaria is identified mainly in African countries. From 2010 to 2015, malaria's frequency and mortality rates decreased in Iran (1). The control of malaria has been far-fetched regarding the resistance of mosquitoes to insecticides and antimalarial drugs. Plasmodium falciparum is a parasitic species that has developed resistance to almost all kinds of antimalarial drugs, and P. viva has been resistant to chloroquine derivatives (2-4). Other reasons for the difficulty controlling malaria are the high price of antimalarial drugs and logistical difficulties, particularly in poor areas where malaria is endemic (5).

During the last 30 years, products with natural sources have made up two-thirds of all drugs (6). Medicinal herbs such as Cinchona species, Artemisia annua, Simaroubaceae, and Meliaceae family are the possible sources of new, effective, and cheap antiplasmodial products, which can make up the leading molecules to investigate new antimalarial drugs (7-10). The genus Artemisia, known as "Dermane" in Persian and "wormwood" in English, is the most prominent member of the Asteraceae family, with more than 300 species of fragrant and medical plants being widely disturbed all over the world, particularly in Southwest Asia and Central Europe (11-13). Essential oils of some species are used in aromatherapy and medicine, and the leaves of some others are used for cooking (14). Approximately 34 species of the Artemisia genus are found in Iran, including A. melanolepis and A. kermanensis, which are endemic (15). Investigating the biological activities of the secondary metabolites of this genus indicated that they had some medicinal effects such as anticonvulsant (16), apoptosis (17), immunosuppressive (18), anthelmintic (19), antimalarial (20), anti-inflammatory (21), anti-HIV (22), antibacterial (23), and antifungal (24) activities. The phytochemical investigations of this genus growing in Iran demonstrated monoterpenes and sesquiterpenes, particularly sesquiterpene lactones, in volatile oils (25). The main secondary metabolites in this genus include acetylene, coumarin, flavonoids, and terpenes. Terpenes, particularly sesquiterpenes characterized by several Asteraceae species, especially the Artemisia genus, are highly diverse and abundant (26). Artemisia fragrans, known as "Dermane ye matter" in Persian, grows in Iran, Russia, and neighboring areas and is famed for its strong fragrans (11).

The present study aimed to screen the antimalarial activity of the aerial parts of A. fragrans.

The aerial parts of A. fragrans Willd. were collected from Mughan in East Azarbaijan province, Iran. A voucher specimen in this collection with TBZFPH 404 has been deposited in the Herbarium of Faculty of Pharmacy, Tabriz University of Medical Sciences, Tabriz, Iran.

For making essential oil (EO), 100 g of the air-dried aerial parts of A. fragrans was powdered and extracted by a Clevenger apparatus (Germany) at room temperature for three hours. After decanting, the colored oils were recovered in the yield of 0.45% (v/w), and the oil was stored at 18°C for further investigation.

The EO and 100% VLC fraction were determined by a Shimadzu (Corporation, Kyoto, Japan) GC-MS QP5050A apparatus using the DB-1 capillary column (60 m × 0.25 mm id, film thickness 0.25 μm). Helium was used as the carrier gas at a 1.3 mL/min flow rate. For the EO analysis, the oven temperature was kept at 50°C for three minutes, then increased at a speed of 3°C/min to 260°C, and kept stable for nine minutes. For analysis of the 100% VLC fraction, the oven temperature was maintained at 50°C for four minutes, then it raised at a rate of 5°C/min to 300°C, and kept steady for 24 min. In addition, the injector temperature and split ratios were 220ºC and 1: 33, respectively. The components of EO and a potent fraction (100% EtOAc) were identified by Kovats Index (KI), retention time (RT), and mass spectrum (MS).

The antimalarial activities of the extracts and different fractions of potent extracts and EO of A. fragrans were evaluated by the modified method of Fitch et al. (27, 28). Incubation of various concentrations of aerial parts (0 - 2 mg/mL in 10% DMSO) was done with 300 μM of hematin, dissolved in 0.1 M NaOH, 10 mM oleic acid, and 1 M HCl. Chloroquine diphosphate was utilized as a positive control. The samples were kept in an incubator overnight at 37ºC with regular shaking. Afterward, the samples were centrifuged (14,000 x g, 10 min, 21°C), and the hemozoin pellet was washed continuously with 2.5% (w/v) SDS in phosphate-buffered saline by sonication (30 min at 21°C) until the supernatant was transparent. Then, the hemozoin pellet was washed with 0.1 M sodium bicarbonate (pH 9.0) until the supernatant was clear again (usually 3 - 5 washes). After the final wash, the supernatant was eliminated, and the pellets were dissolved in 1 mL of 0.1 M NaOH before determining the amount of hemozoin by evaluating absorbance at 400 nm in a 1 mL quartz Corbett (Beckmann DU640 spectrophotometer). The results were recorded as percentage inhibition (I%) of heme polymerization/crystallization compared to a positive control (chloroquine) using the following formula: I% = [(AB–AA)/AB] ×100, where AB is the absorbance of blank (DMSO), and AA is the absorbance of the test sample.

Table 1. The 50% and 90 Inhibitory Concentrations (mg/mL) of the Aerial Parts of Artemisia fragrans in β-hematin Formation Assay 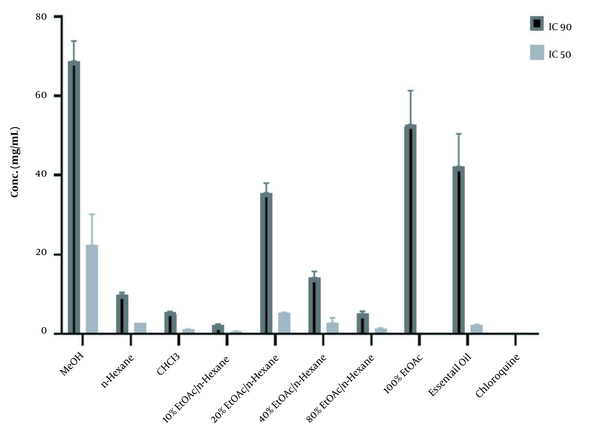 Figure 1. Comparison of IC50 and IC90 values (mg/mL) of active extracts and fractions of potent extracts of Artemisia fragrans and chloroquine solution in β-hematin formation assay.

Then, GC-MS analysis was used to assess the volatile compounds of the potent fraction. According to Table 2, aromadendrene oxide I (34.69%), p-Octyloxynitrobenzene (8.65%), α-Santonin (7.53%), 7a-Isopropenyl-4,5-dimethyloctahydroindene-4-carboxylic acid (5.96%), and β-Methyl ether dihydroartemisinin (5.72%) were found in this fraction.

The essential oil components are presented in Table 3, based on their wash on the DB-1 column. According to Table 3, a total of 32 volatile components were identified in the aerial part of A. fragrans, which contained 99.04% essential oils. It contained 1.96% non-terpenoids and 97.08% terpenoids. Among the terpenoids, monoterpenes and sesquiterpenes were specified as 96.41% and 1.06 of the compounds, respectively. The GC-MS analysis of the EO led to the identification and quantification of five main monoterpenes, including β-thujone (47.43%), eucalyptol (18.04%), α-thujone (7.89%), camphor (7.22%), and 4-Terpineol (3.84%). The β-thujone is the main component of the A. fragrans essential oil.

Table 3. Chemical Compositions of Essential Oil from the Aerial Part of Artemisia fragrans

The Anopheles mosquitoes’ bite infects the human body with Plasmodium, an intracellular parasite, causing malaria (29). Hemoglobin of infected erythrocytes is degraded to amino acids by Plasmodium to use the catabolic products as the primary source of nutrition for their development and proliferation. Free heme is a toxic by-product released by the degradation of hemoglobin by protease enzymes. Hence, the parasite detoxifies free heme in different ways. The most common way of overcoming this problem is by converting large amounts of heme to hemozoin or water-insoluble malaria pigment through the bio-crystallization process.

Although there is a different spectrum of chemical drugs for the treatment of parasite infection, the side effects of chemical compounds persuade researchers to discover novel approaches and drugs originating from natural sources. Artemisinin and 4-aminoquinolines derivatives (quinine, mefloquine, and chloroquine) are natural antimalarial compounds inhibiting hemozoin formation (30, 31). In the present study, A. fragrans was selected to evaluate its antimalarial activity and identify chemical compounds responsible for inhibiting the conversion of heme to hemozoin. Although all of the extracts exhibited significant antimalarial activity compared to the control (P < 0.001), based on the IC50 results, the CHCl3 extract (with the minimum IC50) was selected for further evaluation. It is worth mentioning that the CHCl3 extract significantly inhibited heme conversion compared to n-Hexane and MeOH extracts (P < 0.001). The mentioned results guided us to study the fractions of CHCl3 extract using the VLC method. The 100% EtOAc fraction was considered the most active fraction among the fractions compared to the control (P < 0.001). The GC-MS analysis of the 100% EtOAc VLC fraction indicated that aromadendrene oxide I was the main compound in this fraction, followed by p-Octyloxynitrobenzene and α-Santonian. In the 100% VLC fraction, sesquiterpenes are probably responsible for antimalarial effects with an acceptable amount.

According to the GC-MS analysis results, 32 volatile components corresponding to 99.04% of the total oil were identified, representing high amounts of terpenoids. Among the terpenoids, oxygenated monoterpenes, monoterpenes, sesquiterpenes, and oxygenated sesquiterpenes were the main compounds of volatile oil, in sequence. Here, among the oxygenated monoterpenoids, beta-thujone, eucalyptol, α-thujone, and camphor were specified with high amounts. Other studies into EO of A. fragrans collected from a region in Behshahr indicated that most compounds of EO were camphor (46%), eucalyptol (23.7%), and camphene (7.9%) (13). Another study into EO revealed that the main compounds of the volatile oil of this plant gathered from the surrounding areas of Tabriz were eucalyptol (52.1%) and alpha-thujone (34.8%) (37). Moreover, Delazar et al. reported the main compounds of this essential oil as follows: (1) camphor (54.92%); (2) eucalyptol (11.48%); (3) α-thujone (9.21%); and (4) β-thujone (4.83%). It is worth mentioning that although the main compounds of EO of A. fragrans collected from different regions of East Azerbaijan province [one from the Botanical Garden of Drug Applied Research Center of Tabriz (Delazar et al.,) and one we studied EO from Moghan] are the same in different years and seasons, their percentage in some ingredients are different. For clarification, although in the current research, β-thujone had a high percentage, in the study conducted by Delazar et al., camphor held the first rank in terms of high percentage. Interestingly, eucalyptol is a common compound in all A. fragrans species collected from different regions of Iran (11).