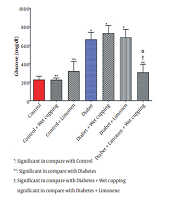 According to the international diabetes federation, 629 million adults will suffer from diabetes by 2045. Wet cupping therapy is a combination of bleeding and dry cupping and has been used in traditional medicine as a complementary therapy for diabetes. Limonene was shown to have both antioxidant and antidiabetic activity but its potential alongside other treatments has not been thoroughly explored.

Although wet-cupping therapy is widely used under different conditions, its potential in the treatment of diabetes is not well-examined.

Male Wistar rats were then injected with alloxan and nicotinamide to induce diabetes. After cupping, the rats’ serum nitric oxide, creatinine, SGPT, SGOT, cholesterol, triglyceride, glucose, GPX, urea, and HDL levels were determined. The glutathione, catalase, glutathione peroxidase, malondialdehyde, and protein level of the serum, renal, and liver were then measured.

The findings of the present study suggested that a combination of limonene and wet cupping therapy could be presented as an agent to lower elevated blood glucose levels in diabetic rats. Further clinical studies are required to confirm the findings.

Cupping is a therapeutic intervention in traditional medicine, which dates back to more than four thousand years ago (1); however, the therapeutic mechanism of cupping is not yet fully understood (2). Wet cupping lowers blood pressure in tissues and discharge inflammatory agents, thereby improving lymph and blood flow (3). There are seven major types of cupping in China, each of which may be used for different therapeutic purposes. In bleeding cupping (or wet cupping), practitioners make small incisions with a triangular-edged needle on the skin to make the tissues bleed (4).

In this regard, serious life-threatening health difficulties are more likely among individuals with diabetes, which would significantly affect the therapeutic care cost, lower the quality of life and enhance mortality (5-8). Evidence implies that the production of reactive oxygen species (oxidative stress) can exacerbate hyperglycemia and increase the risk of diabetes complications (microvascular or cardiovascular) (9). Oxidative stress, which results from an imbalance between the production of free radicals and the body's defense of antioxidants, plays a vital role in developing diabetes complications (10).

Diabetes is acknowledged as one of the significant causes of mortality worldwide. Given the complications associated with existing medications, the search for alternative therapies seems to be necessary (15). For many years, cupping has been used in traditional medicine as a complementary therapy for diabetes. However, this therapeutic approach has not yet been well-studied (16).

The present study aimed to investigate and compare traditional medicine's ancient procedures and the active constituents of traditional herbs. Accordingly, the effect of wet cupping on biochemical parameters and oxidative stress in alloxan/nicotinamide-induced diabetic rats was examined and compared with the effects of limonene and the combination of wet cupping and limonene.

Sixty-four male Wistar rats, named Rattus norvegicus allivias, with an average weight of 180 ± 20 g were purchased from the Pasteur Institute of Tehran Province and kept in the Animal Laboratory of the Razi Medicinal Plants Research Center affiliated with the Lorestan University of Medical Sciences. To accustom the rats to the storage conditions, grouping was performed seven days before the experiment. The rats were then kept under controlled conditions of 23 ± 2°C and light conditions for 12 hours of light and 12 hours of darkness with 50% humidity. The animals were fed a commercial rodent feed with sufficient water. Working with rats were in accordance with the ethical instructions for working with laboratory animals (IR.LUMS.REC.1395.181).

To induce type-2 diabetes, alloxan and nicotinamide were injected intraperitoneally at a dose of 120 and 50 mg/kg body weight, respectively (17). Blood glucose was measured with a glucometer 72 hours after the onset of diabetes (animals with blood sugar > 250 mg/dL were considered diabetic and selected for treatment).

First, the sacral part's hair was shaved entirely to have cupping in rats. After disinfection with alcohol, the affected area was impregnated with lubricant gel to perform the suction phase better. To restrain the animal, the lower third of the tail was held by one person, and another person grabbed the back of the animal's neck with his thumb and forefinger and cupped it with the other hand. To start cupping, the site was first suctioned for 30 seconds using a special cup with a 2-cm diameter, and then the cup was removed using a sterile surgical blade No. 11. Then about 14 grooves with a length of 0.1 cm were made in the site, and the suction step was performed for one minute. Finally, the cupping site was also dressed with honey (18). Each animal was cupped three times, every seven days, during the treatment period.

At the end of the eight-week treatment, the animals in each group were intraperitoneally anesthetized with 8 mg/kg ketamine and 80 mg/kg xylazine. The blood samples were then obtained from the animals' hearts and allowed to clot for 20 minutes at room temperature. The samples were centrifuged for 15 minutes at 3000 rpm (4°C), and the serum was separated and kept at -20°C. Furthermore, the animals' livers and kidneys were collected and homogenized for biochemical analysis. For each gram of the tissue, 5 cc PBS solution was added and then homogenized using a homogenizer.

The glutathione peroxidase (GPx) activity was measured at 37°C according to Flohe and Guzzler’s method (19).

The Aebi method measured the Catalase activity by using h2o2 decomposition at 240 nm (20).

The serum glutathione was measured using the Ellman method, and the absorption was observed by an ELISA reader at 412 nm and reported in micromoles per milligram of protein (21).

This study evaluated the serum, liver, and renal contents of malondialdehyde (MDA) according to the thiobarbituric acid (TBA) assay. The absorbance measurement was performed spectrophotometrically at 532 nm (22).

Nitric oxide (NO) was assessed according to Griess et al.’s method. For this purpose, 50 μL of Griess solution (1%sulfanilmide in 2.5% phosphoric acid solution)was added to 100 μL of serum samples. After 10 minutes, 50 μL N-Naphthyl-ethylenediamine dihydrochloride, phosphoric acid 0.1% was added, and its absorption was then read at 540 nm (23).

The results in this study are expressed as means ± SD. The data were analyzed with the Statistical Package for the Social Sciences (SPSS version 22.0, SPSS Inc., Chicago, IL, USA) using one-way ANOVA and then Tukey post-hoc test. In this study, P < 0.05 was set as the significance level.

As presented in Table 1, there is no significant change in serum nitric oxide, protein, creatinine, SGPT, SGOT, cholesterol, triglyceride, and HDL levels; however, there is a significant difference in serum glucose levels in diabetic rats receiving the combination of limonene and wet cupping therapy compared to the diabetic rats with or without limonene or wet cupping (Figure 1). 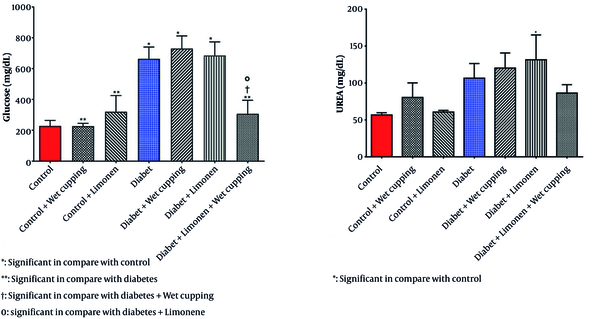 Effect of limonene and wet cupping on serum biochemical parameters (values are given as means ± SD for eight rats in each group). 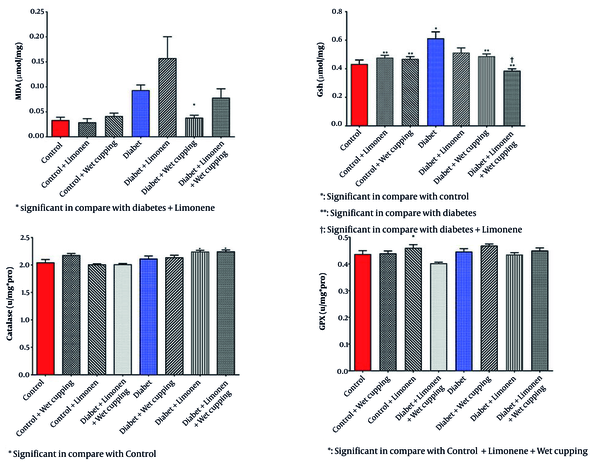 Effect of limonene and wet cupping on serum oxidative stress (values are given as means ± SD for eight rats in each group). 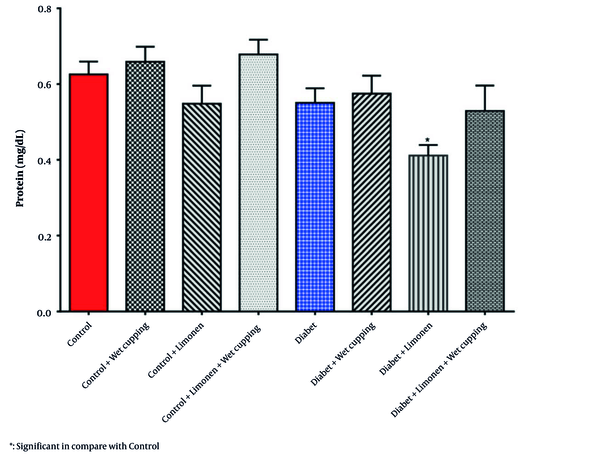 Effect of limonene and wet cupping on renal protein levels (values are given as means ± SD for eight rats in each group). 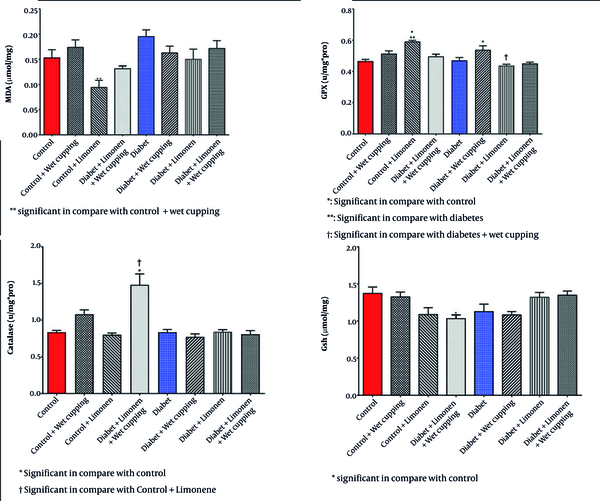 Effect of limonene and wet cupping on Liver oxidative stress (values are given as means ± SD for eight rats in each group).

Our findings revealed that the combination of limonene and wet cupping was significantly more effective in lowering blood glucose levels in diabetic rats than either limonene or wet cupping alone. Our results showed no significant difference in blood glucose levels in rats treated with wet cupping or limonene therapy on diabetic rats, which is in line with the results of another study conducted with 21 participants treated with wet cupping in 2019 (24). However, a previous study presented limonene as a potential antidiabetic agent in streptozotocin-induced diabetic rats (25). The combination of wet cupping and limonene proved to be effective, which could be researched as a promising approach for the treatment of diabetes in the future.

Liver GPX activity was induced in healthy rats who received limonene. The combination of limonene and wet cupping also proved to increase CAT activity in liver samples of healthy rats. Although GPX and CAT activity changed favorably, MDA showed no significant changes, and there was even a reduction in glutathione level.

In previous studies, wet cupping therapy was used as a promising approach in reducing oxidative stress such as a study by Ersoy et al. in 2019 that 24 participants were applied to wet cupping therapy once every month for three months. Measurement of malondialdehyde, total oxidant status, glutathione, superoxide dismutase, total antioxidant status, CAT activities showed a significant improvement in second cupping blood for these parameters compared to initial values (27).

Nitric oxide serum level changes were insignificant; however, in a 2014 study by Tagil et al., which was conducted on 31 healthy volunteers, there was a significant increase in nitric oxide and malondialdehyde venous blood levels (3). Results also showed no significant changes in protein levels in blood, renal, or liver samples. Although the human model study results on the wet cupping effect on urea and creatinine showed a significant decrease, our results indicated no substantial change. However, an increase was observed in the urea level in diabetic rats receiving wet cupping therapy compared to control groups (28). Liver enzymes SGPT and SGOT did not substantially change during this study (29).

Our results also demonstrated no significance in cholesterol, triglyceride, and HDL concentration, similar to two other studies conducted in 2007 and 2012 (30, 31). In another study by Rahman et al., wet cupping effects were investigated in 50 males and 50 female patients aged between 35 and 55 years diagnosed with hyperglycemia, diabetes, and high blood pressure. Wet cupping significantly reduced cholesterol, triglyceride, urea, and creatinine, conflicting with our results (32).

Our results showed no significant reduction in blood glucose level with neither wet cupping nor limonene therapy, but combining these two therapies showed effectiveness, introducing wet cupping-limonene therapy as an agent for lowering elevated blood glucose levels in diabetic rats. Although liver catalase and glutathione peroxidase level was induced in healthy rats, malondialdehyde and nitric oxide levels showed no significant changes. Also, there was a decrease in glutathione levels in both liver and blood, which rejected these two therapies as a promising treatment for oxidative stress. Wet cupping and limonene also showed no promising results in the level of protein, urea, creatinine, SGPT, SGOT, cholesterol, triglyceride, and HDL.

Copyright © 2022, Author(s). This is an open-access article distributed under the terms of the Creative Commons Attribution-NonCommercial 4.0 International License (http://creativecommons.org/licenses/by-nc/4.0/) which permits copy and redistribute the material just in noncommercial usages, provided the original work is properly cited.
download pdf 1.26 MB Get Permission (article level) Import into EndNote Import into BibTex
Number of Comments: 0