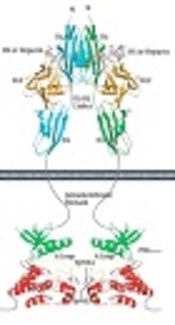 The present study was conducted to shed new light on a possible mechanism, by which flavonoids alter FGF cell signaling.

Recombinant pLEICS-01 expression vectors containing the gene encoding the FGFR2b kinase domain were transformed to E. coli BL21 (DE3). Expression of the recombinant protein was then induced with IPTG. Next, the protein was purified by affinity chromatography. The recombinant protein functionality was assessed using PAGE, by analyzing interactions of the protein with the wild type and the mutant SH2 domains of phospholipase C-γ (PLC-γ). Finally, stability and structural changes of the kinase domain were studied upon interaction with gallic acid, naringenin, quercetin and catechin. Figure 1. FGF cell signaling. The structural basis by which heparin/HS assists FGF and FGFR to form a symmetric 2:2 FGF-FGFR dimer are shown. The N-terminal and C-terminal lobes of the kinase domain are colored green and red, respectively. Domain organization of PLCγ-1 and FRS2α, two major intracellular targets, are shown (4).

The present study was conducted to obtain better understanding of the effect of flavonoids on FGF cell signaling and also to shed new light on the mechanism of action, by which flavonoids alter the FGF signaling pathway. To this end, this study characterized stability and structural changes of human FGFR2b kinase domain upon interaction with four different flavonoids.

Gallic acid (GA), naringenin, quercetin and catechin (Sigma-Aldrich Co., Germany) were dissolved in dimethyl sulfoxide (DMSO), prepared from a stock solution stored at 4°C. To induce chemical denaturation, 8 M guanidinium chloride (GdnHCl) solution was prepared. All other reagents used in this study were of analytical grade and purchased from Sigma-Aldrich Co.

The mutated recombinant kinase domain fragment of human FGFR2b was cloned in pLEICS-01 vectors for bacterial expression. The original empty pLEICS-01 vector was provided by the University of Leicester, UK. Additionally, the recombinant vector was previously reconstructed in the researchers’ lab for another project using the ligase independent cloning method (20). The proteins were expressed in E. coli BL21 (DE3) cells with 1 mM Isopropyl Β-D-1-thiogalactopyranoside (IPTG) (Sigma-Aldrich Co., Germany). For purification, the bacterial cells were lysed in 25 mM 4-(2-hydroxyethyl)-1-piperazineethanesulfonic acid (HEPES) pH 8, 10% glycerol, and 100 mM NaCl. The clarified lysate was loaded on a Ni2+-nitrilotriacetic acid (Ni2+-NTA) affinity chromatography (Sigma-Aldrich Co., Germany). The protein was eluted with 50 to 200 mM imidazole gradient. The fractions containing FGFR2b kinase domain were dialyzed in 25 mM Tris-HCl, 100 mM NaCl, PH 7.5, subdivided to smaller aliquots, and stored at -80°C. Purity of fractions were based on SDS–PAGE analyses. The concentrations of FGFR2b kinase domain were determined using Nano Drop spectrophotometry and an extinction coefficient at 280 nm of 41160 M-1 cm-1 (15, 21).

Moreover, in this study, the researchers engineered the kinase domain fragment of human FGFR2b and introduced two mutations in the kinase domain in order to express the protein in its active state. Mutated positions were created in E565A and K660E residues and were selected based on associated pathologic disorders, namely Pfeiffer syndrome and endometrial cancer, respectively (4, 22). To confirm that the protein was in an active sate, interaction of the purified protein with wild type and mutant SH2 domains of phospholipase C (PLC) was studied. The protein sample was dialyzed and then used to analyze its interaction with both the wild type and mutant SH2 domains of PLC, using polyacrylamide gel electrophoresis (PAGE).

Intrinsic fluorescence measurements of purified proteins were recorded on a Cary Eclipse spectrofluorometer (Varian, Australia), using a 10-mm path length quartz cuvette. photomultiplier tube (PMT) detector was set to medium voltage. Both excitation and emission slits with a 5-nm band pass were used. The fluorescence spectra were produced with excitation at 280 nm and the emission was monitored in the range of 300 to 345 nm at room temperature. For removing the effect of background intensity of the buffer, the system was zeroed with a blank solution (400 µL of buffer). The protein concentrations (0.15 mg/mL) were kept constant in each sample solution. Flavonoids incubated with protein had constant concentrations of protein and different concentration of gallic acid (25 µM to 500 µM), naringenin (50 µM to 3 mM), quercetin (100 µM to 1 mM) and catechin (100 µM to 500 µM). Furthermore, by adding suitable amounts of buffer containing 25 mM Tris-HCl and 100 mM NaCl, and at PH 7.5, the final volumes of solution were kept 400 µL. Then, the emission spectra were taken after sample incubation for twenty minutes.

Sodium dodecyl sulfate-polyacrylamide gel electrophoresis (SDS-PAGE) analysis showed that maximum expression of recombinant proteins occurred four hours post induction. The SDS-PAGE analysis in Figure 2A confirmed that no contamination and bacterial proteins were co-eluted with the purified protein after a Ni-NTA affinity chromatography (Figure 2A). In order to prove the purified recombinant protein is active, protein interaction with the SH2 region of phospholipase C gamma (PLC-γ) was investigated by a native PAGE method. As shown in Figure 2B, the native gel analysis clearly demonstrated that the wild type of SH2 domains of PLC-γ (His6-nSH2-cSH2) could interact with the purified tyrosine FGFR2b kinase domain, whereas the mutant SH2 domains of PLC-γ (His6-nSH2 (R562A)-cSH2 (R694A) was not able to bind to the recombinant FGFR2b kinase domain, confirming that the purified protein was in its active state. Figure 4A demonstrates the effect of increasing concentrations (0 to 6 M) of guanidine hydrochloride on the wavelength of maximum intrinsic fluorescence observed for the hFGFR2b protein. The graph shows the fragment unfolds as a sigmoidal curve with two transitions, suggesting that each domain was unfolded independently. Figure 4. Chemical induced denaturation of FGFR2b kinase domain. A, Represents native spectra and B, C, D, and E represents unfolding in presence gallic acid (from 25 µM to 500 µM), naringenin (from 50 µM to 3 M), quercetin (from 100 µM to 1 M) and catechin (from 100 µM to 500 µM), respectively. The graphs represent the unfolding of the kinase domain structure in the presence of flavonoids and increasing concentrations of guanidine hydrochloride at room temperature.

4.4. Chemical Induced Denaturation of FGFR2b Kinase Domain in the Presence of Increasing Concentration of Gallic Acid

Figure 4B shows a step-wise chemical denaturation of FGFR2b in the absence and the presence of increasing concentration of gallic acid (from 25 µM to 500 µM). The graph clearly demonstrates that an increase in concentration of gallic acid leads to a significant change in the unfolding curve of the FGFR2b kinase domain, significantly shifting the midpoints of the transition states of FGFR2b kinase domain to the left. This finding suggests that presence of the flavonoid destabilizes the tertiary structure of the kinase protein.

4.5. Chemical Induced Denaturation of FGFR2b Kinase Domain in the Presence of Increasing Concentration of Naringenin

Figure 4C shows the step-wise chemical denaturation of FGFR2b in the absence and the presence of increasing concentration of naringenin (50 µM to 3 mM). The graph clearly demonstrates that an increase in concentration of naringenin results in a considerable change in the unfolding curve of the FGFR2b kinase domain, remarkably shifting the midpoints of the transition states FGFR2b kinase domain to the left. This finding suggests the presence of naringenin impinging on the tertiary structure of the kinase protein.

4.6. Chemical Induced Denaturation of FGFR2b Kinase Domain in the Presence of Increasing Concentration of Quercetin

Figure 4D shows a step-wise chemical denaturation of FGFR2b in the absence and the presence of increasing concentration of quercetin (100 µM to 1 mM). The graph clearly demonstrates that an increase in concentration of quercetin causes a remarkable change in the unfolding curve of the FGFR2b kinase domain, considerably shifting the midpoints of the transition states FGFR2b kinase domain to the left. This finding suggests that the presence of quercetin destabilizes the tertiary structure of the kinase protein.

4.7. Chemical Induced Denaturation of the FGFR2b Kinase Domain in the Presence of Increasing Concentration of Catechin

Figure 4E shows a step-wise chemical denaturation of FGFR2b in the absence and presence of increasing concentration of catechin (100 µM to 500 µM). The graph clearly demonstrates that an increase in concentration of catechin causes a significant change in the unfolding curve of the FGFR2b kinase domain, significantly shifting the midpoints of the transition states FGFR2b kinase domain to the left. This finding suggests that presence of catechin destabilizes the tertiary structure of the kinase protein.

The fluorescence analysis revealed that the overall structure of hFGFR2b kinase domain was destabilized upon interaction with gallic acid, naringenin, quercetin and catechin. This is evidenced by the fact that increasing concentrations of gallic acid, naringenin, quercetin, and catechin induced a significant red-shift in the wavelength of maximum emission. As previously explained, the kinase domain of FGFR2b consists of two lobes, the N-terminal and the C-terminal lobes (34, 35). In line with this, the chemical-induced unfolding analysis clearly showed that the kinase domain was unfolded as a sigmoidal curve with two transitions, thus, suggesting the two lobes of the domain was unfolded independently. Importantly, comparisons of unfolding curves of the kinase domain in the presence and absence of gallic acid, naringenin, quercetin, and catechin revealed that the flavonoids destabilized both lobes of the kinase domains, impinging on overall structure of the FGFR2b kinase domain. This is evident by the chemical-induced unfolding data, showing that an increasing concentration of either of the flavonoids considerably shifted the midpoint transitions to the left (from 3.25 M and 4.75 M to lower concentration of guanidine hydrochloride). These data suggested that flavonoids reduced the activity of the FGFR2b kinase domain and thereby down-regulated FGF signaling. Consistent with these findings, several in vitro and cell-based studies have suggested that some flavonoids and unsaturated fatty acid modulate cellular signaling, acting as cancer chemo-preventative agents (36-38). As an example, Hou et al. (3) suggested that some flavonoids directly interact with signaling protein kinases, such as Akt/protein kinase B (Akt/PKB), Fyn, Janus kinase 1 (JAK1), mitogen-activated protein kinase 1 (MEK1), phosphoinositide 3-kinase (PI3K), mitogen-activated protein (MAP) kinase kinase 4 (MKK4), Raf1, and zeta chain-associated 70-kDa protein (ZAP-70) kinase, acting as anti-proliferative agent (20). Additionally, several cell-based analyses have also suggested that flavonoids act as antioxidants, controlling multiple cellular signaling pathways (3, 39). For instance, a comprehensive cell-based study suggested that flavonoids bind to signaling protein kinases, regulating expression of some antioxidant enzymes, such as HO-1, NQO-1 and GSH (12). Taken together, the current findings together with previous in vitro and cellular studies suggest that interaction of flavonoids with signaling protein kinases, such as FGFR2b, imping on active conformations of signaling molecules, thus down-regulating their kinase activities. These results therefore provide a possible molecular mechanism, by which flavonoids exert their anti-proliferative functions, thus, suggesting that they may have a place as adjuvant therapy in combination with tyrosine kinase inhibitors (TKIs).

The authors thank the Qazvin University of Medical Sciences for their financial support and the Pasteur Institute of Iran for their technical support.

Copyright © 2018, Jundishapur Journal of Natural Pharmaceutical Products. This is an open-access article distributed under the terms of the Creative Commons Attribution-NonCommercial 4.0 International License (http://creativecommons.org/licenses/by-nc/4.0/) which permits copy and redistribute the material just in noncommercial usages, provided the original work is properly cited.
COMMENTS