Eryngium is a genus with 274 species, which belongs to the Umbelliferae family. The nine species of this genus are endemic to Iran. The existence of terpenoids, saponins, flavonoids, and steroid components in most Eryngium species is the reason behind their anti-inflammatory, anti-cancer, and, especially, anti-diabetic effects among the well-known medicinal plants.

This study aimed to evaluate the effects of anti-diabetic features of Eryngium thyrsoideum and caucasicum on streptozotocin (STZ)-induced diabetic mice.

The extract of the plants’ dried samples was prepared by using 70% ethanol solvent and adopting the maceration method. The mice were divided into eight groups, and the mice with a high blood glucose of more than 200 mg/dL were assigned to diabetic groups. Diabetic animals received different doses of the extract orally or through intraperitoneal (IP) injection for eighteen days. The animals were anesthetized by IP injection of ketamine and xylazine, and serum samples were isolated.

Diabetes mellitus (DM) is one of the crucial endocrine diseases, classified as a chronic metabolic disorder. The prominent feature of this disorder is hyperglycemia, which causes symptoms such as atherosclerosis, stroke, peripheral vascular disease, polyuria, polydipsia, polyphagia, retinopathy, neuropathy, nephropathy, glaucoma and if left untreated, blindness (1-3). The prevalence of DM became an epidemic, with 171 million infected people worldwide in 2000, and it is predicted that it will reach 629 million in 2045 (4). Risk factors that increase the susceptibility to DM include high blood pressure, polycystic ovary syndrome (PCO), overweight, age and gender, inactivity, family history, and so forth (5, 6). Due to the high cost of medicines and adverse side effects of chemical drugs, the application of herbal medicines has been recently suggested as an alternative treatment. Many reports have indicated the effectiveness of various types of herbs in treating diabetes therapy. Among the plants with medicinal properties, species of the genus Eryngium have a useful role in lowering blood sugar. The given plants are widespread throughout northern and central parts of Iran (7). Due to their compounds such as flavonoids (8), coumarin (9), saponin (10), tannin (11), caffeic acid (12), chlorogenic acid (13), fatty acids, and terpenoids (14), these plants have several pharmacological effects, which can be antimicrobial (14), anti-inflammatory (15), and antioxidant (16), etc.

Eryngium caucasicum and E. thyrsoideum were collected from the Maragheh region, Iran, in August 2016. After the identification, the herbarium samples with numbers TBZ FPH 1250 and 1251 were deposited by the herbarium of Tabriz University of Medical Sciences. The shoot parts of the plants were dried in the open-air condition and converted to a fine powder using an electric mill. The obtained powder was extremely light and had a very low density.

Extraction was carried out by adopting the maceration (soaking) method. First, 250 grams of plant shoot powder were poured into a large, wide-mouthed Erlenmeyer flask and added 70% ethanol equivalent; then, the contents of the Erlenmeyer were stirred well to mix the powder evenly into the solvent. Afterwards, the Erlenmeyer head was covered with parafilm and placed away from sunlight, and the contents of the Erlenmeyer were stirred every 24 hours. When the solvent color was fixed, this proceeding was stopped, and the supernatant was filtered by a filter paper; then, the resulting extract solvent was dried by using an evaporator under low pressure and temperature, and kept in the freezer for testing.

STZ is a powder which cannot be injected intraperitoneally directly; therefore, sodium citrate dihydrate buffer should be used to dissolve STZ in order for performing the intraperitoneal (IP) injection of STZ. Each mice needs 150 mg/kg of STZ. Since STZ is sensitive to light, all these steps should be followed in a dark place until injection (20, 21).

3.5. Stimulation of Diabetes in Mice by STZ

3.6. Treatment of Diabetic Mice by Extract in IP/Oral form and Their Surgery

Diabetic mice (i.e., groups 3, 4, 5, and 6) received the extracts for 18 days, and were anesthetized using 80 - 100 mg/kg ketamine and 3 - 10 mg/kg xylazine on the 21st day (23-25). The anesthetized mice were checked by adopting the cervical dislocation method to ensure the vital signs stop after anesthesia (26). The mice were placed on their back, then their forelimbs were stretched out using a pin on their front feet. A deep incision was made in the armpit to create a cupped area. Afterwards, the blood vessels were cut with a scalpel, and the blood was collected as it pooled. The blood was centrifuged at 4500 rpm and 4°C for 30 minutes and refrigerated at 4°C for two hours, then the serum of blood samples was kept at -70°C (27).

Enzyme-linked immunosorbent assay (ELISA) was carried out for measuring the samples of serum insulin using a Shibayagi kit. Biotin conjugated to insulin monoclonal antibody was added in coated wells, including 10 µ serum samples for 2 h at room temperature. After washing the wells with wash buffer, streptavidin in conjugation with horseradish peroxidase (HRP) was added and incubated for 30 min. After washing again, chromogen reagent was added to react with streptavidin-conjugated HRP residue for 30 min, then the reaction was halted by adding the solution. The absorption rate was measured at 450 nm using a microplate reader (Bio-Rad, Hercules, CA, USA) (29).

The level of MDA was evaluated using the colorimetry method and thiobarbutyric acid reagent (TBARS) at 350 nm absorption rate according to the manufacturer’s protocol (Jiancheng Institute of Bioengineering Company, Nanjing, China) (30).

The serum TAC was measured in plasma samples and assessed using the ferric reducing ability of plasma (FRAP) method. This method is based on the principle of the ferric-tripyridyltriazine complex reduction to the ferrous form by the antioxidants of a sample and causes the development of an intense blue color, which is spectrophotometrically measurable at 593 nm. This change in absorbance is related to the antioxidant capacity of the samples (31).

Data were represented as mean ± SD (standard deviations) and analyzed using one-way ANOVA and post-hoc Tukey. The P < 0.05 was considered a significant variance.

Alterations in blood sugar in control and diabetic groups (the data in the chart is reported as mean ± SEM).

According to our findings about coincidental management of STZ at a dose of 150 mg/kg by IP injection and extract (300 mg/kg) by gavage (oral), the blood sugar level of the samples was significantly reduced compared to that of the diabetic group on the 5th day (Figure 2).

Alterations in blood sugar level of samples during coincidental management of STZ and 300 mg/kg extract by gavage (the data in the chart is reported as mean ± SEM).

4.3. Measurement of the Weight Changes

Weight variation in control and diabetic groups (the data in the chart is reported as mean ± SEM).

4.4. Weight Alterations in Coincidental Management of STZ and Extract with a Dose of 300 mg/kg 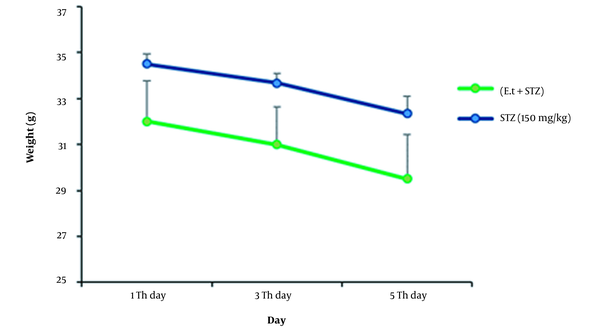 Weight variation of samples during coincidental management of STZ and 300 mg/kg extract by gavage (the data in the chart is reported as mean ± SEM).

4.5. Alterations in Blood Sugar on the Oral Glucose Tolerance Test

Changes in blood sugar in mice during the OGTT test (the data in the chart is reported as mean ± SEM).

4.7. Investigation of MDA in the Serum of Mice 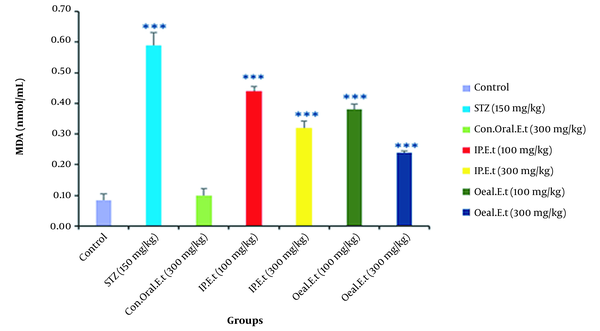 4.8. Investigation of TAC in the Serum of Mice 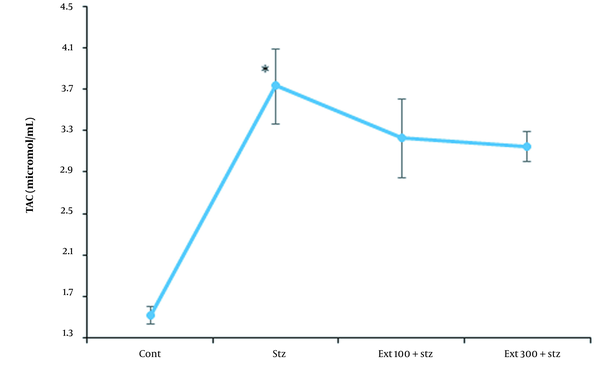 Serum TAC levels among groups (the data in the chart is reported as mean ± SEM; Con, control; STZ, streptozotocin).

Although two species of Eryngium were assessed for their anti-diabetic effect, only E. thyrsoideum extract was found to increase serum insulin and diminish serum MDA. It was determined that the hydroalcoholic extract of E. thyrsoideum significantly reduced MDA levels in both IP injection and gavage (oral) injection modes (***P < 0.001); this suggested that the hydroalcoholic extract of the plant was able to improve antioxidant activity in the body and reduce the damage to body organs caused by oxidative stress. According to our study results, therefore, it was concluded that the hydroalcoholic extract of E. thyrsoideum had the potential to protect pancreatic beta cells from STZ damage by stimulating the remaining healthy pancreatic beta cells to secret insulin, and by increasing the serum insulin levels alone, which contributed to the reduction of blood sugar and serum MDA.

Copyright © 2023, Author(s). This is an open-access article distributed under the terms of the Creative Commons Attribution-NonCommercial 4.0 International License (http://creativecommons.org/licenses/by-nc/4.0/) which permits copy and redistribute the material just in noncommercial usages, provided the original work is properly cited.
download pdf 1.34 MB Get Permission (article level) Import into EndNote Import into BibTex
Number of Comments: 0