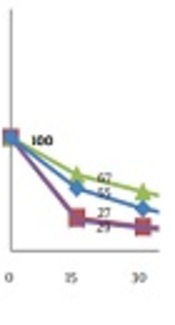 Reduction in the quality and quantity of food can be due to the presence and growth of fungi in food. Responsible for contamination of feed and food, are some species of Aspergillus.

Objectives of this study were to investigate the essential oil of Satureja rechingeri as antifungal agent against strains of Aspergillus parasiticus NRRL2999 and Aspergillus flavus PICC-AF39 (productive aflatoxin B1).

Natural compounds such S. rechingeri for prevention of aflatoxinogen fungal growth are recommended because of strong antifungal activities.

Very much research has been done to characterize natural substances which might control fungal growth and aflatoxin production. In order to inhibit aflatoxin production, some natural products are known. Aflatoxins B1, B2, G1 and G2, are extremely toxic, carcinogenic, mutagenic compounds generally produced by important species of fungi such as Aspergillus flavus, Aspergillus parasiticus and Aspergillus nomius in various food commodities (1, 2). Aflatoxin B1 is considered a group A carcinogen by international agencies (3, 4). Among aflatoxins produced by Aspergillus parasiticus are aflatoxin B & G. Nevertheless, aflatoxin B1 (AFB1) is a very powerful carcinogen to humans and animals, which is very well recognized (5, 6). Although a global issue, aflatoxin food pollution is particularly problematic in the subtropical area and tropical area of the world where humidity and ambient temperature favors the growth of the fungi (7). Satureja rechingeri is a member of the large Lamiaceae family. Its relationship with Satureja Edmund and Satureja khuzestanica has been reviewed and discussed (8).

In this study, efforts were made to evaluate growth inhibition of fungi of Aspergillus species by the essential oil of Satureja rechingeri.

The microorganism was maintained on Sabouraud dextrose agar (Quelab, Canada). Spore suspensions of Aspergillus were prepared and diluted with sterile water yeast extract sucrose (YES) broth, at a concentration of about 107 and 105 spores/mL. Spore population was counted using a haemocytometer (9). Aspergillus parasiticus NRRL2999 and Aspergillus flavus PICC-AF39 were used.

Antifungal screening by diffusion method was as follows: after sterilizing Sabouraud dextrose agar (Que Lab), then distributed into petri dishes with a diameter of 80 mm, Aspergillus parasiticus NRRL2999 and Aspergillus flavus PICC-AF39, spores (105 and 107 spores/mL) inoculum on the surface. Sterile filter paper 6-mm Whitman No. 1 was used as the disc the Whitman discs were placed on the agar plates containing Aspergillus and then of different concentrations of essential oils 1, 2, 3, 4, 5, 10, and 20 μL of oils was put on the discs, all was done under aseptic conditions. The plates inoculated with spores were incubated for 10 days at temperature of 28 ± 2ºC. Three replicates were used for each treatment. Using Vernier calipers, the diameter of the microbial inhibition zones was measured (10).

Varying amounts of concentration of the oils were added to 2 mL of yeast broth tubes containing 100 µL, 105 and 107 spores/mL in order to evenly disperse the oil throughout the broth inside of tubes and the tubes stayed incubated for 72 hours on a shaker incubator. As the minimal inhibitory concentration (MIC) is the highest dilutions that prevent visible growth was regarded, which can be determined by culturing microorganisms from tubes not growth on plates of solid Sabouraud dextrose agar. The highest dilutions at which no growth happened on the plates was determined as the minimal fungicidal concentration (MFC). Figure 1. Inhibition at a Concentration of 10 µL S. rechingeri the Aspergillus parasiticus NRRL2999 Figure 2. Inhibition at a Concentration of 20 µL S. rechingeri the Aspergillus parasiticus NRRL2999

In conclusion, this study showed that S. rechingeri oil has a powerful antifungal activity against Aspergillus flavus and Aspergillus parasiticus. Also this essential oil can be used as a possible source of environmentally friendly herbs or botanical fungicides.

Multiple technologies have been used to alleviate aflatoxin risk and remove fungus. Field management methods that decrease performance may also remove fungus and prevent aflatoxin. A variety of methods to remove and reduce aflatoxin such as physical procedures including heating, γ rays and extreme ultraviolet radiation, chemical procedures such as the utilization of chlorine, hydrogen peroxide, sodium sulphate, ozone gas, ammonia solution, alkali, biologic factors and mechanical procedure and other options to control the toxin. Natural products and aromatic organic compounds can be successful alternatives to chemical and physical factors and provide procedures to replace protection for agricultural products from toxigenic fungus such as Aspergillus flavus and Aspergillus parasiticus.

Since Aspergillus flavus and Aspergillus parasiticus ability to grow fast on food products that could damage the food industry, health, and economy. Therefore inhibiting the growth of this fungus can be helpful to the health of the community.

Other research has reported that the activity of thyme and Satureja in inhibiting the growth of fungi contaminating food crops and gardens and agricultural products in the world, capable of replacing anti-fungal chemicals are present (12).

A study on the inhibitory effect on the growth and aflatoxin production of Aspergillus parasiticus by S. hortensis essential oil had reached the conclusion that Satureja essential oil is an important potential for aflatoxin production inhibitor G1 and B1 are produced by Aspergillus parasiticus (13). Other results suggest the possibility of using other plant oils in controlling the growth of the fungus (14).

In the essential oil S. rechingeri had good antifungal activity against the two fungi species tested. This study indicates that S. rechingeri has considerable anti-Aspergillus activity at compared with C. Cyminum that MIC and MFC were 750, 1000 ppm and 3000, 2500 ppm, respectively (10).

H. suaveolens leaves essential oil showed activity against Aspergilus parasiticus that MIC and MFC were 40 and 80 µL/mL, respectively. Malele et al. (15) using the oils of Ocimum gratissimum and Thymus vulgaris reported complete inhibition of Aspergillus flavus and Aspergillus fumigatus at 800, 1000 respectively. Fungicidal kinetics of essential oils showed more than 50% spore death in 15 minutes (16) that at compared with the present study, while similar times have been reported.

Natural compounds such S. rechingeri for prevention of aflatoxinogen fungal growth are recommended because of strong antifungal activities.

We gratefully thank Yasouj Branch, Islamic Azad University. This study was supported by the vice-chancellor for research affairs of School of Pharmacy, Ahvaz Jundishapur University. The authors also desire to express their acknowledgment to Dr. Abdulghani Ameri and Dr. Somayeh Handali for technical assistance and Khoraman Co. (Khorramabad, Iran) for sending oil.

Copyright © 2019, Jundishapur Journal of Natural Pharmaceutical Products. This is an open-access article distributed under the terms of the Creative Commons Attribution-NonCommercial 4.0 International License (http://creativecommons.org/licenses/by-nc/4.0/) which permits copy and redistribute the material just in noncommercial usages, provided the original work is properly cited.
COMMENTS