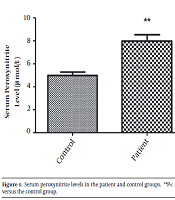 There is growing evidence that oxidative stress may play a principal role in the etiology of psychiatric disorders, such as obsessive-compulsive disorder (OCD). The potent oxidant peroxynitrite (ONOO-) is the final yield of rapid reaction nitric oxide (NO) and superoxide anions.

Twenty-one patients with freshly diagnosed OCD and not using any drugs and 19 healthy volunteers were enrolled in this study. Serum peroxynitrite levels were measured in the control and OCD groups.

Obsessive-compulsive disorder (OCD) is a common psychiatric complaint characterized by disturbing thoughts and repetitive compulsive activities, and it often involves anxiety and depressive symptoms. Most of these patients have severe impairments in social activities including occupational and educational (1). While medical and behavioral therapies are effective in these patients, some OCD patients are resistant current treatments (2). In the etiology of OCD several factors can be involved including genetic, social, biochemical, and psychological factors (3). It has been proven that reactive free radical species are involved in the onset and development of various human diseases including cancer heart disease, lung disease, and rheumatoid arthritis (4, 5). Recent studies have shown that reactive free radical species, including reactive oxygen species (ROS) and reactive nitrogen species (RNS), are associated with some central nervous system diseases including, schizophrenic, major depressive disorder, and anxiety (6-9).

Obsessive-compulsive disorder outcomes include a progressive damage in dopaminergic and serotonergic neurons, which is suggested similar to the etiology of depression, anxiety and schizophrenia (10).

Nitric oxide (NO) is an RNS and is a short-lived neurotransmitter in the central nervous system. Nitric oxide is produced by nitric oxide synthase (NOS), and recent evidence has shown the role of NO in psychiatric disorders including schizophrenia and OCD (6, 11, 12). However, increased NO has cytotoxic effects, and these side effects associated with by the potent oxidant peroxynitrite (ONOO-) produced by the rapid reaction of NO and superoxide anions (13). Increased peroxynitrite generation in the tissue leads to the production of nitrotyrosine, and the presence of nitrotyrosine in the tissue indicates damage to proteins (14).

The aim of this study is to evaluate the correlation between serum peroxynitrite level and OCD.

We conducted a case-control study at the Neurology Clinic of Imam Khomeini Hospital affiliated to Ahvaz Jundishapur University of Medical Sciences (AJUMS). Obsessive-compulsive disorder was diagnosed by a psychiatrist. This study was conducted in Ahvaz, Iran from March 2016 to March 2017. The study was approved by the Ethics Committee of AJUMS. All the participants signed informed consent forms.

The case group consisted of 21 OCD patients (9 males and 15 females). The patients completed the Yale-Brown Obsession Compulsion Scale (Y-BOCS) to determine the severity of OCD (15). The control group consisted of 21 healthy volunteers who were completely normal and did not have any history of psychiatric disorders according to the exclusion criteria and physical and biochemical examinations.

Setsukinai et al. established a new method for detecting ROS such as serum peroxynitrite by a hydroxyphenyl fluorescein (HPF) probe (20). This method is based on the fact that when HPF reacts with peroxynitrite (ONOO -) or hydroxyl radical (OH), it shows a robust dose-dependent fluorescence.

Continuous variables were expressed as mean ± SD. Student’s t-test and Pearson’s correlation coefficient were used to analyze the data in SPSS, version 16.0. Statistical significance was set at P < 0.05.

4.1. Demographic Data of the Patient and Control Groups

Forty subjects were enrolled, which included 17 (43%) men and 23 (57%) women. Of the 40 subjects, 19 (48%) of them were assigned to the control group and 21 (52%) were in the patient group (Table 1). All OCD patients were confirmed by a neurologist. There was no significant difference in demographic characteristics between the male and female or the case and control groups.

Table 1. Demographic Data of the Patient and Control Groupsa

4.2. Serum Peroxynitrite Levels in the Patient and Control Groups 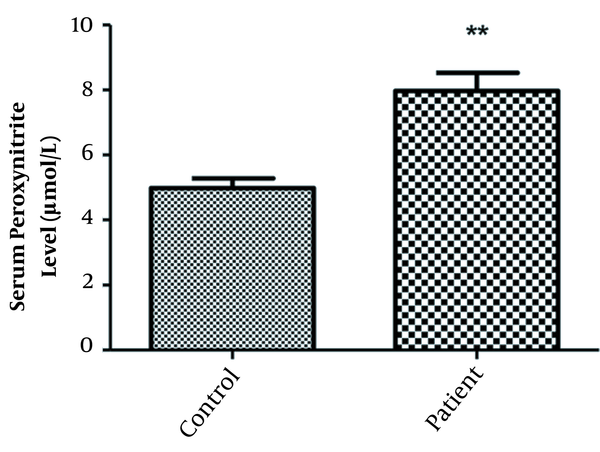 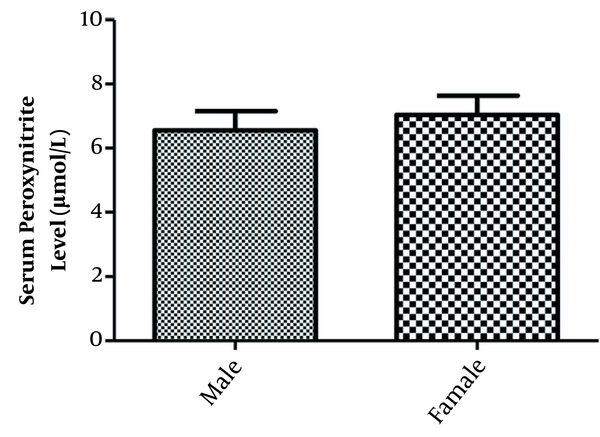 Our findings revealed that serum peroxynitrite levels significantly increased in OCD patients compared to healthy volunteers. However, serum peroxynitrite levels in OCD patients were not significantly different between male and female patients. Previous studies have established the role of ROS and NO in the pathogenesis and etiology of OCD. The present study showed that peroxynitrite as a potent oxidant plays a key role in the pathogenesis of OCD.

Based on these studies, researchers tend to focus on drugs that are designed according to the oxidative etiology in psychiatric diseases, for example n-acetyl cysteine as a strong antioxidant used in the treatment of bipolar disease (26)

Nitric oxide is produced by nitric oxide synthase, and studies have indicated the correlation between Nitric oxide as an oxidant and psychiatric disorders, including schizophrenia and OCD (6, 11, 12). Atmaca et al. showed that elevated NO level may be related to OCD pathophysiology (31). Increased NO values lead to the reaction of NO with superoxide anion and production of potent oxidant peroxynitrite (13); increased peroxynitrite generation leads to the production of nitrotyrosine, which indicates damage to proteins (14). Kouti et al. established the role of increased serum levels of ONOO- and NO in the development of Parkinson's disease; they also noted that NO and peroxynitrite as oxidative stress biomarkers can be considered for Parkinson's disease diagnosis (6). There are no previous studies evaluating peroxynitrite level in OCD patients. Our study showed that serum peroxynitrite levels in OCD patients significantly increased compared to the control group. Obsessive-compulsive disorder can be the result of a progressive damage to serotonergic and/or dopaminergic neurons in the brain (10).

Neurons in comparison with other organs are more susceptible to oxidative stress damage because they have a high ratio of membrane surface to cytoplasmic volume, slight levels of protective antioxidant enzymes, and high concentrations of readily oxidizable membrane polyunsaturated fatty acids. Neurons have an anatomical network vulnerable to disruption and a great amount of oxidative metabolic activity such as catecholamine degradation (31). Although the adult human brain constitutes only about 2% of the body weight, but brain consumes about 20% of the body’s oxygen and glucose for the production of energy. Consequently, the brain is predominantly exposed to the neurodegeneration of mitochondrial dysfunction and its resulting oxidative stress damage. In addition, catecholamine metabolism is a unique feature of catecholaminergic neurons and represents a further source for ROS production in the brain (32).

Our findings indicate the important role of ONOO- in the etiology of OCD. Serum peroxynitrite level may be considered as an oxidative biomarker for OCD patients in the future, and it seems using drugs with antioxidant properties in the treatment of OCD can be considered for preventing further damage by oxidants. However, further studies are needed to confirm the role of antioxidants in OCD.

This research was extracted from a thesis by Mr. Mohsen Chaab that was financially supported by the Deputy of Research of Ahvaz Jundishapur University of Medical Sciences, Ahvaz, Iran.