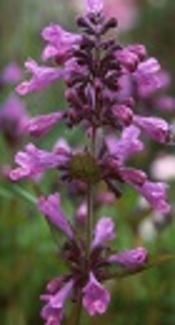 Total phenolic and flavonoid contents in different extracts of Nepeta binaludensis Jamzad aerial parts were evaluated by colorimetric methods and the best results were found in 50% hydro-methanol extract with total phenolic (4.42 ± 0.0014 mg of gallic acid/g of dry mass of plant) and flavonoid (0.8 ± 0.0009 mg of quercetin/g of dry mass of plant) contents. Antioxidant activity of the extracts were also evaluated using 1,1-diphenyl-2-picrylhedrazyl (DPPH) assay. The best result was found in 50% hydro-methanol extract (the half-maximal inhibitory concentration IC50 = 3.0 mg/mL). A good correlation between the radical scavenging activity and total phenolic and flavonoid contents of the extracts was observed. Antimicrobial activity of 50% hydro-methanol and ethyl acetate extracts of the aerial parts of N. binaludensis were also evaluated on four different bacteria and a fungus in the current study. Considerable antibacterial activity against Staphylococcus aureus (4.0 mg/mL) and Streptococcus pyogenes (4.0 mg/mL) were observed for ethyl acetate extract in comparison with the other samples.

The genus Nepeta (Lamiaceae) includes about 250 species, which are found in North Africa, Eurasia, particularly the Mediterranean region. There are about 75 species grown wild in Iran, of which 46 species are endemic (1). Nepeta binaludensis Jamzad is a rare and endemic aromatic plant grown in limited areas of Northeast Iran in the Binalood Mountains (2). The plant is widely used in traditional medicine for headaches, migraines, digestive disorders, rheumatism, asthma, and cardiovascular disorders (3).

Based on the authors’ previous studies on Iranian medicinal and aromatic plants, various extracts of Nepeta binaludensis were investigated in terms of total phenolic and flavonoid contents as well as antimicrobial and antioxidant activities. There are a few studies on N. binaludensis, but not in line with the current study. Rustaiyan et al. reported that the essential oil of N. binaludensis is rich in 1,8-cineole (4). Mohammadpour et al. reported significant antibacterial activity for the essential oil of the species (5). There are also two reports by Nadjafi et al. on N. binaludensis. In the first study, essential oil composition of the plant was evaluated and 1,8-cineole was reported as the main component; they also studied the eco-biological background and ethno-medicinal use of the rare and highly endangered species, N. binaludensis (3). In the second study, the effects of cultivation on phenology and morphological properties of the plant were investigated (6).

Aluminum chloride, Folin-Ciocalteu reagent, quercetin, sodium acetate, sodium bicarbonate, butylated hydroxyltoluene (BHT), and the other solvents were prepared from Merck (Germany). Gallic acid and 1,1-diphenyl-2-picrylhedrazyl (DPPH) were purchased from Sigma-Aldrich (US). For colorimetric methods and DPPH assay, UV-visible spectrophotometer (CECIL, CE 7800, UK) was used. MHA (Muller-Hinton agar), MHB (Muller-Hinton broth) and BHIA (brain-heart infusion agar) were purchased from Merck (Germany) and all the antibiotics and antifungal agents were provided from Sigma-Aldrich (US).

The aerial parts of Nepeta binaludensis Jamzad were collected from Zoshk Village region in Binalood Mountains (3000 m height), in Khorasan Province, Iran on June 2014. Voucher specimen (No.48860) was deposited at the Herbarium of the Research Institute of Forests and Rangelands (TARI), Tehran, Iran.

2.3. Preparation of the Extracts

To prepare the extract, 10 g of dried powdered aerial parts of N. binaludensis was mixed with 100 mL of the following solvents separately: methanol, 50% hydro-methanol, deionized water, and ethyl acetate. The mixture was stirred occasionally in one week and then, was passed through a filter paper. The filtrate was concentrated under reduced pressure and used for assays.

Total phenolic contents of the extracts were determined by the Folin-Ciocalteu method (7). Briefly, 0.75 mL of Folin-Ciocalteu reagent (10-fold diluted by deionized water) was added to 100 μL of the extracts (methanol, 50% hydro-methanol, and distilled water) (20 mg/mL) at room temperature. After 5 minutes, 0.75 mL of sodium bicarbonate (60 g/L) was added and mixed thoroughly.

The absorbance rate of each extract was measured by UV-Vis spectrophotometer after 90 minutes.

A calibration curve was plotted for the standard solutions of gallic acid (0 - 100 ppm) and total phenolic contents of the extracts were evaluated in terms of gallic acid equivalent (mg/L).

The results were expressed as mean ± standard deviation (SD) for three independent experiments.

Briefly, 0.5 mL of each extract (methanol, 50% hydro-methanol, and deionized water) (20 mg/mL) was dissolved in methanol (1.5 mL) and then, 10% aluminum chloride (0.1 mL), deionized water (2.8 mL), and 1.0 M sodium acetate (0.1 mL) were added. The solutions were incubated for 30 minutes at room temperature. Then, the absorbance of the solutions was measured at 415 nm by UV-Visible spectrophotometer. The same procedure was used for the standard solutions of quercetin (0 - 100 ppm) and a calibration curve was plotted. The flavonoid contents of the extracts were expressed in terms of quercetin equivalent (mg/L). The results were expressed as mean ± SD for three independent experiments.

Radical scavenging activity of the extracts and the standard (BHT) was measured from the bleaching of the purple-colored methanolic solution of DPPH (9). For this purpose, a solution of DPPH in methanol (40 μg/mL) was freshly prepared. Then, 2.5 µL of the solution was added to 10μL of each extract. Finally, the absorbance of the test tubes was measured by the spectrophotometer at 517 nm after 30 minutes incubation in dark. To calculate the percentage of radical scavenging activity, following equation was employed:

The average of two independent experiments was expressed as the final result.

The IC50 value (extract concentration providing 50% inhibition) was calculated by the graph plotting inhibition percentage against the extracts concentration.

Crude extracts of N. binaludensis was used to evaluate antimicrobial activity based on the macrodilution method. In this method, the ability of microorganisms to produce visible growth in the tubes containing serial dilutions of the antimicrobial agents is tested. For this purpose, 50% hydro-methanol (117 mg/mL) and ethyl acetate (64 mg/mL) extracts of the plant were used. The microorganisms evaluated in the study were Streptococcus pyogenes (ATCC 8668), Staphylococcus aureus (ATCC 25923), Salmonella paratyphi B (ATCC 1231), Escherichia coli (ATCC 11229), and a fungus Candida albicans (ATCC 10231) prepared from research center of biotechnology and industrial center of fungi and bacteria collections, Iran. The microorganisms were maintained in viable state via incubation on MHA and overnight incubation at 37°C. Broth inoculums were standardized to 0.5 McFarland by mean of dilution with sterile MHB and measuring the optical density at 620 nm wavelength. Absorbance readings were set to 0.09 - 0.13 (~ 1.5 × 108 CFU/mL).

The standard antibiotics, including tetracycline, ampicillin, kanamycin (100 mg/mL), and an antifungal agent as nystatin (2.5 mg/mL), were used as positive controls. To determine the possible inhibitory activity of solvents on the tested bacteria, 50% hydro-methanol and ethyl acetate were used simultaneously as positive controls.

A twofold serial dilution of each extract was prepared in 12 tubes containing 1 mL Muller-Hinton broth; then, 0.1 mL of bacterial suspension with 0.5 McFarland turbidity was added to all the tubes, except the tube No. 12 (as the control). Then, the tubes were incubated at 37°C for 24 hours. To determine the MBC (minimum bacterial concentration, the lowest concentration of an antibacterial agent required to kill a particular bacterium), 25 μL of each dilution was incubated at 37°C in BHIA for 24 hours. The highest dilution (least concentration) that inhibited colony formation on this solid medium was considered as MBC (10).

Possible antioxidant activity of the extracts was also investigated by DPPH scavenging assay in this project. Results showed the higher potency for the 50% hydro-methanol extract than the methanolic and aqueous extracts. The highest antioxidant activity was less than half-maximal inhibitory concentration (IC50) value. The IC50 value for 50% hydro-methanol, methanolic, and aqueous extracts were 3.0, 4.5, and 5.2 mg/mL, respectively (Figure 1). The IC50 value for BHT as a positive control was 8.1 mg/mL. 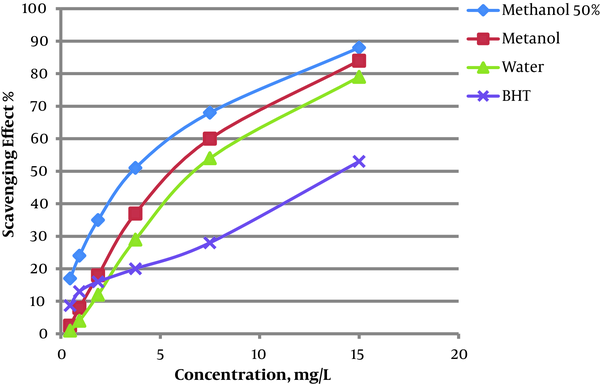 Based on the obtained results, there was a good correlation between antioxidant activity and total flavonoid and phenolic contents in the various extracts of N. binaludensis. Phenolic compounds and flavonoids are the secondary metabolites with powerful radical scavenging effect and antioxidant activity (11). 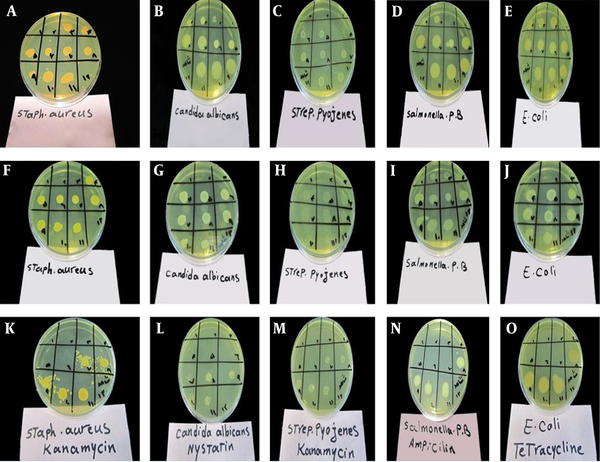 With regards to Table 2, since the initial concentration of ethyl acetate extract (64 mg/mL) was lower than those of the 50% hydro-methanol extract (117 mg/mL) and antibiotics (100 mg/mL), it can be concluded that ethyl acetate extract has significant antibacterial activity against the two Gram-positive bacteria: Staphylococcus aureus and Streptococcus pyogenes and a Gram-negative bacteria Escherichia coli. The effectiveness of 50% hydro-methanol extract on Staphylococcus pyogenes was also considerable. Based on the obtained results, N. binaludensis possesses the compounds with antibacterial properties. These compounds can effectively inhibit the growth of bacteria. Based on previous reports, compounds such as terpenoids and flavonoids have antimicrobial activities (12-14). To determine the nature of the antibacterial effects of the extracts, the MBC/MIC ratio was determined; in all cases, the MBC and MIC values were equal and the ratio was ~1, except for the 50% hydro-methanol extract against Streptococcus pyogenes, which the MBC/MIC ratio was 4. Hence, all the extracts can be considered as bactericidal agents (15).

Crude extracts of plants exhibited in vitro antibacterial, antifungal, and antioxidant activities by many researchers. Nepeta species such as N. cataria L. var. citrodora, N. meyeri Bentham, N. nepetella, N. praetervisa, N. glomerulosa Boiss, N. ciliaris Benth., N. rtanjensis, and N. elliptica Royle ex Benth., showed such properties (16-23). In a study by Kraujalis et al. antioxidant activity of several Nepeta species was evaluated (24). Acetone, methanol, and water were used as solvents for extraction, based on their polarity differences. Results of the studies showed that methanolic extracts have significant antioxidant activities, in comparison with the less polar acetone extracts, and the best results belonged to the extracts of N. cataria. Lee et al. reported a relationship between antioxidant properties of Nepeta species and the presence of phenolic acids, particularly rosmarinic and caffeic acids, in the extract (25). A few reports are also available on biological activities of Nepeta binaludensis. In a study, antimicrobial activity of the essential oil of N. binaludensis was evaluated. Based on the mentioned report, the essential oil showed moderate antimicrobial activity against Staphylococcus aureus, Bacillus cereus, Escherichia coli and Candida albicans. The essential oil had no effects on Pseudomonas aeruginosa (5).

The results of the current study can be used as a strategy to develop novel antioxidants and antimicrobial drugs. Nowadays, resistance to antimicrobial agents is increasing, and herbal products are the rich sources for antimicrobial agents. The present study demonstrated that the areal parts of N. binaludensis are good sources of such compounds with antioxidant and antibacterial activities.

Authors are thankful to Dr. Ziba Jamzad for collection and identification of the species.

Copyright © 2018, Jundishapur Journal of Natural Pharmaceutical Products. This is an open-access article distributed under the terms of the Creative Commons Attribution-NonCommercial 4.0 International License (http://creativecommons.org/licenses/by-nc/4.0/) which permits copy and redistribute the material just in noncommercial usages, provided the original work is properly cited
COMMENTS