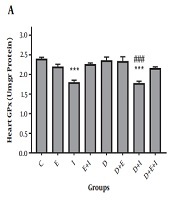 Diabetes is a common metabolic disease that increases the risk of cardiovascular disease. It seems that the reduction of oxidative stress or increasing antioxidant levels improves diabetic cardiomyopathy. Antioxidant effects of immunomodulatory drug (IMODTM) and also beneficial influences of exercise on diabetic complications have been shown. The present study examined the effects of IMODTM and exercise on cardiac oxidative stress and antioxidants in diabetes. For this purpose, 64 rats were divided into 8 groups: control (C), exercise (E), IMODTM (20 mg/kg) (I), exercise plus IMODTM (E + I), diabetes (D), diabetic rats treated with exercise (D + E), diabetic rats treated with IMODTM (D + I), and diabetic rats treated with exercise plus IMODTM (D + E + I). Treatments with exercise and/or IMODTM were performed for 8 weeks. Type 1 diabetes was induced by intraperitoneal injection of 60 mg/kg streptozotocin. After the treatment period, all rats were anesthetized, and blood and heart samples were gathered for measurement of malondialdehyde (MDA) as an oxidative stress marker, lactate dehydrogenase (LDH) as a cardiac injury marker, total antioxidant capacity (TAC), and superoxide dismutase (SOD) as well as glutathione peroxidase (GPx) as antioxidant enzymes. The present study, for the first time, showed that IMODTM alone or in combination with exercise had positive effects on alleviating hyperglycemia, MDA, and LDH along with elevation of antioxidant enzymes activities in type 1 diabetic rats.

Diabetes is the most common metabolic disease, which characterized by hyperglycemia. Type 1 diabetes is associated with the destruction of insulin-producing pancreatic β-cells (1). Diabetes, with complex and not fully understood pathophysiology, increases the risk of cardiovascular complications at least 10-fold (2, 3). Diabetes-induced impairments in cardiac function and structure are termed as diabetic cardiomyopathy (DCM) (4, 5). There are several hypotheses about the pathophysiology of diabetes-induced cardiomyopathy. Among them, the role of oxidative stress in DCM is a more experimentally supported mechanism (6). In diabetes, an increase in free radical generation along with a reduction in free radical elimination results in oxidative stress and promotes production of malondialdehyde (MDA), a product of lipid peroxidation, as an oxidative parameter (6-8). Considering the crucial role of oxidative stress in DCM, it seems that approaches for reduction of reactive oxygen species (ROS) or elevation of antioxidant defense mechanisms in the myocardium can improve cardiac function in diabetes (9). In this regard, the beneficial effects of antioxidants on complications of diabetes have been suggested (6). IMODTM is a selenium-based mixture from Rosa canina, Urtica dioica, Tanacetum vulgare extracts, as well as selenium and urea. This herbal compound is used as an antioxidant and anti-inflammatory as well as an immunomodulatory agent (10-12).

It has been shown that physical activity has beneficial influences on diabetic complications, which is partly derived from its antioxidant properties (13, 14). As suggested previously, exercise reduces the cardiovascular risk factors in obese as well as diabetic patients (15, 16). Positive effects of exercise on systemic oxidative stress and reduction of cardiac oxidative stress in diabetes have been demonstrated by human and animal studies, respectively (13, 17, 18). For instance, Lee et al. (13) showed that regular exercise improved coronary vascular function through the reduction of diabetes-induced oxidative stress and inflammation.

Based on the main role of oxidative stress in DCM and also antioxidant and anti-inflammatory properties of IMODTM and exercise training, the present study investigated the effects of IMODTM in combination with regular exercise on oxidative stress-related cardiac consequences of type 1 diabetes in rats.

In this study, 64 male Wistar rats (250 - 300 g) were housed in standard conditions (at the temperature of 22 ± 2°C and 12-hour darkness and light cycle) with free access to food and water. All experimental protocols were directed according to the regulations for the use and care of Laboratory Animals (1996, published by National Academy Press, 2101 Constitution Ave. NW, Washington, DC 20055, USA).

Type 1 diabetes was induced by intraperitoneal injection of 60 mg/kg streptozotocin (dissolved in a citrate buffer) (19, 20). After 72 h of diabetes induction, initial blood glucose levels were measured by a digital glucometer (Gluco Sure, Star, Taiwan), and animals with blood glucose levels higher than 300 mg/dL were classified as diabetic.

In exercise groups, running exercise was performed on a treadmill (5 days/week, 60 min/day at 22 m/min, 0 degree slope), at 10:00 AM, for 8 weeks. Moreover, rats in the non-exercised group were placed on the treadmill for the same duration. An effective dose of IMODTM (Rose Pharmed co., Iran) (20 mg/kg) (11) was injected intraperitoneally, once a day at 8:00 AM for 8 weeks, in IMODTM treated groups.

At the end of treatments, the animals were kept fasted (overnight) for 12 h, and fasting blood glucose (final blood glucose) was measured by a digital glucometer (Gluco Sure, Star, Taiwan). Then, all rats were deeply anesthetized by ketamine (60 mg/kg) and xylazine (10 mg/kg) (21), and afterwards, blood samples were collected and stored at deep freeze (-70°C). Moreover, heart samples were immediately removed, frozen in liquid nitrogen, and stored at -70°C for later measurements. The blood samples were centrifuged (1000 rpm for 15 minutes at 4°C), and the serum was collected and stored at -20°C for total antioxidant capacity (TAC) and MDA assays. The heart samples were homogenized in a KCl solution (1.15%) (Sigma-Aldrich, Steinheim, Germany) and centrifuged (1000 rpm for 1 min at 4°C) (22). Then, the supernatants were collected and stored at -20°C for LDH, MDA, superoxide dismutase (SOD), and glutathione peroxidase (GPx) measurements. Protein content in the serum and heart samples’ homogenates was estimated by the Bradford technique (23).

Levels of LDH, as a cardiac injury marker, were measured in supernatants obtained from the heart samples spectrophotometrically by an automatic biochemistry analyzer using a commercially available kit according to manufacturer protocol.

Furthermore, MDA was assayed, as a lipid peroxidation indicator, by measuring thiobarbituric acid-reactive substances (TBARS) in the serum and the supernatant obtained from the heart samples. In brief, all samples were mixed with 10% trichloroacetic acid (1 mL) and 0.67% thiobarbituric acid (1 mL) and heated in boiling water (for 15 min), and N-butanol (2:1, v:v) was added to this solution. After centrifugation, TBARS were determined by absorbance at 532 nm through a spectrophotometer (24).

The activity of SOD in the supernatant obtained from the heart was assayed through RANSOD kit (Randox labs. Crumlin, UK), as previously described by Delmas-Beauvieux et al. (25) at 505 nm through a spectrophotometer. This method uses a xanthine-xanthine oxidase system as a superoxide radical generator which reacts with 2 (4 iodophenyl) 3 (4 nitrophenol) 5 phenyl tetrazolium chloride (ITN) to generate a red formazan dye. Substrate concentrations were 0.025 mmol/l for ITN and 0.05 mmol/L for xanthine. The SOD activity was assayed through the rate of inhibition of this reaction. Then, the activity of this antioxidant enzyme was calculated and expressed as ng/mg protein in tissue, as previously described (22).

The activity of GPx in the supernatant obtained from the heart tissue was measured by a RANSEL kit (Randox Crumlin, UK) as previously described by Paglia and Valentine (26) at 340 nm by a spectrophotometer. This enzymatic activity was determined through measuring the rate of oxidized glutathione formation, which is generated by the reduction of organic peroxide ((26, 27), and was expressed as U/mg protein in the tissue.

Measurement of TAC in supernatant from heart tissue homogenate was performed using a Randox commercial kit according to the manufacturer’s protocol (28). Then, final absorbance was detected at 600 nm by a spectrophotometer.

4.1. Effects of Exercise and IMODTM on Blood Glucose Level

4.2. Effects of Exercise and IMODTM on MDA and LDH 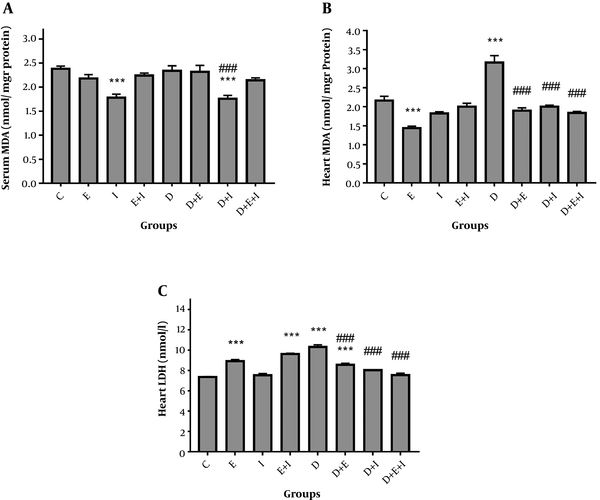 4.3. Effects of Exercise and IMODTM on Antioxidant Enzymes and TAC 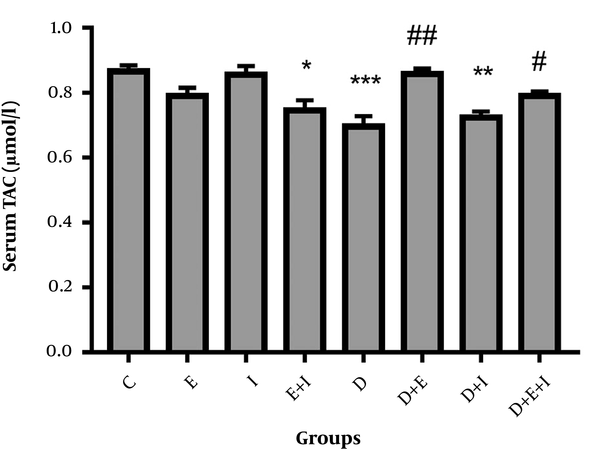 The present study for the first time showed that oral administration of IMODTM alone or in combination with exercise had favorable impacts on alleviating diabetes-induced hyperglycemia as well as systemic and cardiac oxidative stress in type 1 diabetic rats.

This study showed that IMODTM, in combination with exercise or either of them alone, reduced diabetic hyperglycemia. Consistent with these findings, exercise-mediated improvement in hyperglycemia has been shown by several previous studies (29-31). However, a previous study suggested that the treatment of type 1 diabetic mice with IMODTM (for 21 days) had no significant effect on blood glucose levels (32). It seems that the long period (8 weeks) of IMODTM administration in this study is responsible for its blood glucose-lowering effect.

This study examined the effects of IMODTM and exercise on MDA and LDH levels to determine oxidative stress and cardiac damage, respectively. It has been shown that MDA is a primary marker for oxidative stress, and its elevation in diabetes has a role in diabetic complication development (35, 36). Moreover, previous studies introduced LDH as a cardiac tissue damage marker and also an early predictor of heart damage (37). In the present study, diabetes led to the elevation of cardiac MDA and LDH levels. However, IMODTM alone or, in combination with exercise, reduced heart levels of these variables in diabetic rats. Consistent with the present study, the beneficial effects of regular exercise on decreasing lipid peroxidation and oxidative stress have been shown by some studies (18, 38, 39). Coskun et al. (38) suggested that regular exercise exerted a protective effect against diabetes through the preservation of pancreatic β-cells, reduction of lipid peroxidation, and also elevation of antioxidant enzyme activity. In agreement with the present study, Mohseni-Salehi-Monfared et al. (32) reported that IMODTM reduced oxidative stress in the pancreas of streptozotocin (STZ) injected diabetic mice. Moreover, a recent in vitro study showed that IMODTM reduced oxidative stress in erythrocytes (40). Regarding the effect of exercise on healthy rats, in this study, swimming exercise increased cardiac LDH levels. In agreement with this study, a previous study indicated that the treatment of rats with 4 hours of swimming exercise increased LDH activity in the plasma, which could result from an escape of LDH from the liver, heart, skeletal muscle, and possibly platelets and red cells (41).

In the present study, diabetes decreased serum TAC levels, and exercise alone or in combination with IMODTM increased these levels in diabetic rats. However, IMODTM could not affect this variable. Moreover, this study showed the reduction of SOD activity in diabetic rats, which was reversed by IMODTM in combination with exercise or either alone. Furthermore, our findings suggested the role of exercise alone or in combination with IMODTM in elevation of GPx activity. However, IMODTM could not affect cardiac GPx activity in diabetic rats. In line with this study, Ghattas et al. (42) showed that activities of antioxidant enzymes decreased in diabetes. It has been reviewed that regular physical exercise, as a therapeutic and preventive strategy for diabetes, improved the antioxidant defense system (39). Other study showed antioxidative properties of exercise training in chronic heart failure through increasing antioxidant enzyme activities (43). Regarding the beneficial effects of IMODTM, antioxidant properties of IMODTM were shown by some studies (12, 44). Rezvanfar et al. (12) reported that IMODTM significantly decreased oxidative stress, and also increased antioxidant potential through the elevation of serum and ovary SOD and GPx activities in a rat model of polycystic ovary. Larijani et al. (44) reported that IMODTM at low doses exerted antioxidative effects as well as increased insulin secretion and cell viability in isolated rat pancreatic islets. In addition, antioxidant, anti-inflammatory, and immunomodulatory properties of IMODTM have been confirmed by another previous study in a rat model of immunologic colitis (11). Therefore, regular supplementation of IMODTM in combination with exercise training may protect type 1 diabetic rats against diabetes-induced heart injury through their hypoglycemic and antioxidant properties. Moreover, in this study, the beneficial effect of exercise on diabetic-induced impairment in antioxidant defense system is stronger than IMODTM.

In summary, it seems that IMODTM, in combination with exercise, decreases systemic and cardiac oxidative stress markers and also improves the cardiac antioxidant defense system, which leads to alleviating cardiac LDH levels as a cardiac injury marker in diabetic rats.

The grant of this study was supported by the Neurosciences Research Center of Tabriz University of Medical Sciences, Tabriz, Iran. Our data in this work were derived from the thesis of Mr. Ali Ali-Aghdam for an MSc degree in physiology (thesis serial number: 92/2-8/11).