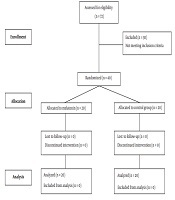 Intracerebral hemorrhage (ICH) is one of the most debilitating kinds of stroke. Recent evidence shows that the proper initiation of neuroprotective agents might save at risk neurons and improve the outcome.

The focus of this study is to evaluate the neuroprotective effect of melatonin on patients with hemorrhagic stroke.

Forty adult patients with confirmed nontraumatic ICH, who were admitted to the ICU within 24 hours of the stroke onset were enrolled in this study. Subjects in the melatonin group received 30 mg of melatonin every night for 5 consecutive nights. In order to evaluate the intensity of the neuronal injury, S100B was assessed once on day 1 and, day 5 post ICU admission. Additionally, the length of ICU stay, mortality, and the duration of mechanical ventilation were also recorded.

Forty patients completed the study. In both groups the plasma concentrations of S100B decreased after 5 days compared with their baseline values. However, this reduction was more significant in the melatonin compared to the control group (P-value < 0.05). The duration of mechanical ventilation and length of ICU stay was shorter in the melatonin group, and this difference was statistically significant for the length of ICU stay (P-value < 0.05), and marginally significant for the duration of mechanical ventilation (P-value = 0.065). The in-ICU mortality rate of the melatonin group was 15%, almost half of that of the control group (30%). However, this difference was not statistically significant.

In conclusion, melatonin can be considered as a harmless and effective nueroprotective agent with some unique features which has made it an appropriate adjunctive medicine for critically ill intubated patients.

Spontaneous, nontraumatic intracerebral hemorrhage (ICH) is one of the most debilitating kinds of stroke (1, 2). Research has shown that most patients who are admitted with small ICHs, can survive if they receive appropriate medical care. Therefore, it can be concluded that good medical interventions may improve the outcome of these patients (3). Trials which have evaluated medical therapy for hemorrhagic stroke are very scarce, and the optimal treatment strategy remains to be found.

Neuroprotective agents have not been extensively investigated in animal models of ICH. However, recent evidence shows that the proper initiation of neuroprotective agents might save at-risk neurons and improve outcomes in patients with hemorrhagic stroke (4). In recent years, melatonin has generated a great deal of interest as a neuroprotective agent for different neurological disorders (5) because of its low toxicity, antioxidative, antiapoptotic, and anti-inflammatory properties (5, 6). In contrast to the partial distribution of other antioxidants, melatonin diffuses easily across the cell membranes and can act as an intracellular antioxidant as well as pass through the blood-brain barrier (7, 8). With regards to its extraordinary high antioxidant effect, numerous animal studies have been designed to evaluate the protective effect of melatonin on stroke (9).

The pathogenicity of stroke is a multifactorial process involving the interaction of multiple mechanisms, such as oxidative stress, excitotoxicity, mitochondrial dysfunction, and calcium dyshomeostasis (5). It has been widely accepted that oxidative stress and inflammation are the main causes of cell death in stroke (5). Because of its antioxidant effect, melatonin has shown to be protective against oxidative injury in various in vivo and in vitro models of neurodegenerative diseases (9-11). The protective effect of melatonin on animal models of stroke has been indicated in a metaanalysis (12).

In our research, S100B has been considered as a biomarker of damage associated molecular pattern (DAMP). This protein increases during the acute phase of brain damage (13). The serum levels of S100B have been shown to correlate with the severity of injury and outcome. Moreover, it is a useful tool for predicting the efficiency of the treatment and prognosis (14, 15). It has been reported that after a hemorrhagic stroke, plasma levels of S100B Increase within 6 hours, peak at 24 hours, and then decline gradually over 2 days (15).

Previous studies have shown that pineal calcification and low melatonin levels are associated with symptomatic cerebral infarction and intracerebral hemorrhage (16, 17).

The aim of this clinical trial was to evaluate the neuroprotective effect of exogenous melatonin on patients with hemorrhagic stroke.

Forty adult patients with confirmed acute ICH who were admitted to the ICU within 24 hours of stroke onset were enrolled in this randomized double-blind clinical trial.

Exclusion criteria were evidence of traumatic ICH, brain neoplasm, contraindications to receiving oral medication, Glasgow Coma scale (GCS) score of 8 or more, renal insufficiency (estimated glomerular filtration rate < 60 mL/min), and pregnancy or breastfeeding. In order to avoid the short-lasting pseudo increase in the plasma levels of S100B after surgery, a 24 hour interval between surgery and blood sampling was considered. If it was not possible, then the patient would be excluded from the study (18, 19).

The written informed consent was signed by a legal surrogate instead of the patients due to the reduced level of consciousness. The study protocol was approved by the Ethics Committee for Human Research at Tehran University of Medical Sciences (code: IR.TUMS.VCR.REC.1395.884). Patients were randomized using the permuted-block randomization method. Patients in the treatment group received 30 mg of melatonin (Melatonin, Webber naturals, Canada) (as a tablet) every night throughout their nasogastric tube for 5 nights. Clinical characteristics of patients and demographic data were obtained at the time of enrollment. Additionally, mortality, the duration of mechanical ventilation, and the length of ICU stay were also recorded for all patients. The period of study was about one year.

S100B (using a Human S100B ELISA kit, Biovender), as a biomarker of neuronal injury was assessed once on the first day and day 5 post ICU admission. Blood samples (5 cc) were drawn from all patients through the antecubital vein into the sampling tube on days 1 and day 5. After waiting 10 minutes for coagulation, samples were centrifuged (10 min, 1000 rpm) in order to obtain serum, which was subsequently stored at -70°C until analyzed.

Forty patients who met our inclusion criteria were enrolled in the study: twenty (50%) patients were allocated in the melatonin group and 20 (50%) patients in the control group (Figure 1). No significant difference was seen in the baseline characteristics of patients except for body mass index (BMI) (P-value = 0.049) (Table 1).

Table 1. Demographic and Clinical Characteristics of the Patients in Groupsa, b

bStudent’s t-test and Chi-square were used to compare these values respectively. 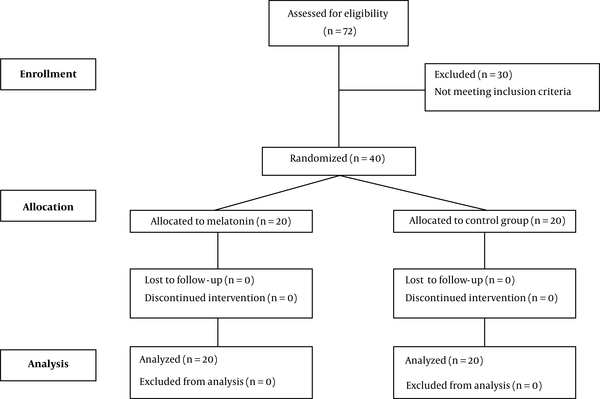 Consort flow chart of the study

Table 2. Effect of Melatonin on Serum Concentration of S100Ba, b

aValues are expressed as mean ± SD to compare values before and after intervention and between groups, paired t-test and t-test were used respectively.

bANCOVA was used to compare values between groups when the baseline values were assumed as a covariate.

aNumerical values were reported as median (inter quartile range), and nominal factors as number (%), Mann-Whitney U-test and chi-square test were applied to compare these values respectively.

A smaller proportion of the participants in the melatonin group were diagnosed with sepsis during their ICU stay in comparison with the control group. However, this difference was not statistically significant.

The in-ICU mortality rate of the melatonin group was 15%, almost half of that of the control group (30%). However, this difference was not statistically significant (Table 3).

Melatonin has been studied in different fields of neurological disease such as seizures, brain edema, and traumatic brain injury with different dosing methods ranged from 3 mg to 50 mg, without any adverse effects (10).

The result of our research has shown that melatonin administered in a high dose within 24 hours of insult, can increase the clearance of S100B. Previous studies have demonstrated that the therapeutic window for neuroprotection in humans is up to four days after stroke onset. With respect to this issue, an eligibility criteria of including patients within 24 hours of onset seems rational (4). Since it has been suggested that ischemic damage may continue for several days after infarction, 5 days of melatonin therapy has been considered in this clinical trial (4).

Available clinical data show that melatonin possesses hypnotic, anxiolytic, and analgesic properties, with minimal adverse effects on psychomotor performance, sleep wake cycle, and respiratory system. Moreover, it has been reported that melatonin is effective for both preventing and treating ICU delirium (20, 21).

The result of this randomized clinical trial revealed that administration of 30 mg of melatonin daily for 5 days is safe and effective in reducing S100B protein levels in patients with hemorrhagic stroke. One study has shown that in spite of critical illness, the bioavailability of melatonin after oral administration is satisfying, and the intestinal absorption is comparable to that of normal volunteers (22). The dose of 30 mg was chosen since investigations have shown that the antioxidant effect of melatonin can be seen at doses above 10 mg, and with respect to safety, most of the studies usually use the dose as high as 20 mg to 50 mg (23).

Because there is strong evidence that oxidative stress is responsive to neuronal injury and its severity, antioxidant therapy may be extremely effective in reducing the cellular damage caused by free radicals (8). Moreover, it has been suggested that melatonin can exert some protection against neurotoxicity via other mechanisms, including regulation of calcium level, antiapoptotic activity, inhibition of mitochondrial permeability, decreasing cerebral edema, anticonvulsive, and anti-inflammatory effect (5, 11, 24, 25).

As has been shown in Table 2, a smaller proportion of the participants in the melatonin group were diagnosed with sepsis during their ICU stay in comparison with the control group. The protective effect of melatonin against sepsis and septic shock has been well documented in both human and animal models. It has been reported that melatonin can prevent circulatory failure, mitochondrial damage, and multi-organ failure, reduce lipid peroxidation and proinflammatory cytokines, and inhibit nitric oxide synthase (23, 26, 27). An investigation indicated that circadian rhythm was impaired in the septic patients when compared to the nonseptic ones, and it was concluded that reduced circadian melatonin secretion in septic patients may be the result of severe sepsis (28). Moreover, another theory is that reduced plasma melatonin concentrations may reflect the consumption of melatonin as an antioxidant (28, 29). In another study, decreased serum melatonin levels were associated with higher mortality rates in septic patients (30). A recent study revealed that the administration of melatonin as an adjuvant medicine in the treatment of septic newborns was associated with improvement of laboratory data and clinical outcomes (31).

As can be concluded from Table 2, the duration of mechanical ventilation was shorter in the melatonin group compared with the control one. Although this difference was not statistically significant, it can be hypothesized that melatonin may accelerate the weaning process by reducing the need for high doses of sedatives with respiratory depressant effects, inhibiting ventilator-associated lung injury, and improving the neurological status (32-34).

With regard to safety issues, experimental animal studies have claimed that melatonin is generally safe even in a dose as high as 200 mg/kg/day, and no serious adverse effects have been reported. Additionally, the safety of melatonin in humans has been shown in a metanalysis (35).

In conclusion, melatonin can be considered as a harmless and effective neuroprotective agent with some unique features which has made it an appropriate adjunctive medicine for critically ill intubated patients.