Comparison of Antibacterial Efficacy of Probiotic Mouthwash with Chlorhexidine Against Common Oral Pathogens: An In-Vitro Study 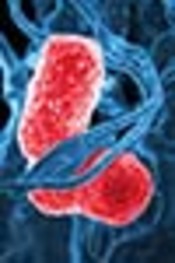 The basic method in prevention of oral disorders and hygiene of an oral cavity is control of plaque growth and germ accumulation on teeth and gingivae. Mouthwashes are most common topical solutions against plaque formation. Although there are many antimicrobial agents in use, only a few have shown clinical effectiveness. Furthermore, their long-term use may lead to several side effects. Therefore, utilizing natural antimicrobial agents such as probiotics may be an effective way to overcome the problem. The purpose of the present investigation was to design a mouthwash formulation containing probiotic extract.

Standard strains of 4 main oral pathogenic bacteria, Streptococcus mutans, Streptococcus salivarus, Actinomyces viscosus, and Actinomyces neoslandi were utilized to evaluate the product antimicrobial activity. Lactobacillus casei was cultured in standard medium and its antibacterial effectiveness was evaluated by the spot-test. Each pathogen suspension was inoculated separately on plates containing specific media. Lyophilized probiotic extract (LPE) was prepared in a specific temperature condition and poured in wells. After incubation, the samples growth inhibition zone was measured. Mouthwash formulations containing different concentrations of LPE, Glycerin, and Sorbitol were prepared and based to their physic-chemical properties as well as their long-term stability. The best formulation was chosen and flavorant and sweetener were added. Well-diffusion method was utilized and their mean diameters of growth inhibition was recorded and compared to that of chlorhexidine and a blank Glycerin-Sorbitol solution as positive and negative controls, respectively. Minimum inhibitory concentrations of each formulation were investigated by the macro-dilution method and the formulation with maximum antibacterial activity was determined.

Well-diffusion experiment showed that chlorhexidine mouthwash is stronger than 1% - 4% containing LPE formulations, while there was no significant difference between 5% LPE formulation and the positive control (P > 0.05). There was no growth in the inhibition zone. For negative control, MIC studies proved that 5% LPE and chlorhexidine formulations were similar and their maximum and minimum activities were A. neoslandi and S. salivarous, respectively.

The findings in the present study proved that the 5% LPE formulation is as effective as the chlorhexidine solution and may be utilized as a natural safe mouthwash.

Probiotics are live micro-organisms that may positively their host by adjusting its microbial flora. Their origin is generally from the human sources and is considered as not pathogenous. They are proper solutions for improvement and health of gastro-intestinal tract, decreasing antibiotics consumption, disease prevention, immunopotentiation, and antipathogenic activity via competition for nutritive materials or production of antimicrobial agents. According to more recent definitions, probiotics are not limited to live microorganisms, however, not-living probiotics are also effective. The most common organisms utilized as probiotic sources are lactobacillus, Bifidobacterium, and Entrococcus species. They produce lactic acid via carbohydrate fermentation and are resistant against gastro intestinal pH variations, temperature fluctuations, and the presence of bile salts as well as GI enzymes (1, 2). It has been previously reported that their biologic activities are due to production of active biologic metabolites, which are present in their culture media and may be extracted by washing out their media, separation of supernatant, and drying preferably by the freeze-drying method. The metabolites are including of different chemical structures including organic acids, bacteriocins, and polyamine compounds (3, 4). These compounds show bacteriostatic and bacteriocidal effects on opportunistic Gram positive and negative bacteria in human and animal gastrointestine (GI) (5, 6). Regarding several studies that have proven anti-pathogenic effectiveness of probiotics, it was proposed that the mouthwash formulation containing probiotics may play an important role in prevention and control of dental plaque.

2.1. Determination of Rate of Growth

Fresh cultivated L. casei cells were suspended in MRS-B medium and then 1 mL of the suspension (containing 102 cfu/mL) was transferred to flask containing 100 mL sterile culture media and incubated at 37°C and microaerophillus condition for 42 hours. Samples were drawn at 1 hour intervals and analyzed by the optical density (OD) method using a spectrophotometer (UV detector, S-3100, Scinco, Korea) at 600 nm (7).

The microorganisms were suspended in MRS-B culture media and the centrifuged at 4000 rpm for 30 minutes. The supernatant was transferred to sterile containers at a sterile condition and stored at a cold temperature. To assure the stability and efficacy of probiotic preparations, their pH was measured before and at 48 hours intervals for 9 month. Each determination was repeated 3 times and the results were presented as Mean ± SE (7).

A 1 × 106 cfu/mL suspension of each grown bacteria was prepared in sterile double-distilled water and then cultivated on plates containing sterile MHA. Then, using standard rods, 5 mm diameter wells were made and filled with 200 µL supernatant. Next the plates were incubated at 37°C for 48 hours and zones of growth inhibition against pathogenic species were measured. The procedure was repeated for freeze-dried supernatant to assure its stability during the Freeze-dried procedure (7, 8).

2.4. Determination of MIC of Both Probiotic Extracts Against Periodontal Pathogens

The conventional macro serial dilution method was used to determine the minimum inhibitory concentration (MIC) of both probiotic extracts: fresh supernatant (Sup-0) and LPE with respect to 4 bacterial strains. A stock solution of Sup-0 was prepared in sterile Muller-Hinton broth (100 mg/mL), which was further diluted in MHB to reach concentration range of 0.19 mg/mL to 100 mg/mL. LPE was also dissolved in MHB to reach a concentration range of 0.039 mg/mL to 20 mg/mL.

Different formulations containing water, Glycerin, and Sorbitol are tabulated in Table 1. The samples were prepared in 25 mL flasks and their homogeneity, pH, and transparency were determined before and after 3 month of storage at a cold temperature (8).

Antimicrobial efficacy of each formulation was detected by the well-diffusion method. Briefly, 4 wells were produced in each plate and 100 µL of that sample was placed in the wells. Formulations F1 to F3 were deleted due to their improper physic-chemical properties. Samples were kept at 37°C incubator for 24 hours and finally their zones of growth inhibition were measured.

To determine MICs of the formulations, the serial dilution method was utilized. Briefly, 48 tubes were arranged in 4 rows using sterile conditions and 2 mL MHB was poured in each tube. The tubes were serially diluted by adding 2 mL of the solution from the previous tube. Then 100 µL of each bacterial suspension was placed in each tube. The last tube in each row was considered as negative blank control. The tubes that were transparent or turbid after 24 and 48 hours of experiment were considered as negative (no growth) and positive (growth), respectively (9).

Experiments were repeated 3 times and data are presented as Mean ± SE. Paired t-test and ANOVA were used to compare the data and P < 0.05 was considered as significant difference.

Figure 1. The Kinetics of Growth of Lactobacillus casei in MRS Media Incubated at 37°C for 42 Hours Under Defined Microaerophillic Condition

Stability experiments regarding pH of samples showed no significant difference between the probiotic supernatant before (pH = 3.6) and 9 months after (pH = 3.9) storage (Figure 2).

Figure 3. The Anti-Bacterial Effect of Fresh Supernatant in Comparison with Lyophilized Extract by Well-Plate Method

The results of MIC studies for supernatant and lyophilized powder of probiotic are shown in Table 2. The results indicate that for all of the tested microorganisms, lyophilization of the extract significantly (P < 0.05) increased the activity against the bacteria.

A proper mouthwash formulation should have characteristics such as low toxicity, low rate of absorption by biological membranes, suitable pH and viscosity, and proper transparency. Comparing the characteristics for all of the prepared formulations, formulation 4 had the best properties. Results of pH determination in different time intervals for LPE 4% (F4) and LPE 5% (F5) are shown in Table 3.

Table 3. Results of pH Variations of LPE 4% (F4) and LPE 5% (F5) in Different Time Intervals After Incubation at Room Temperature

Figure 4. Comparison of the Effect of Piot Formula, F4 and F5 with Chlorhexidine Containing Mouthwash on Different Pathogenic Micro-Organisms

3.7. Determination of MIC and MBC

Table 4 shows MICs of 4% and 5% LPE mouthwashes, chlorhexidine solutions, and negative control. It can be inferred that LPE 5% formulation has higher inhibitory efficacy than F4 formulation. It is also shown that Actinomyces species are more susceptible than Streptococcus species against the antibacterial agents. The effect is also significant (P < 0.05) for their minimum bactericidal concentration (MBCs) of the formulations.

Table 4. MICs and MBCs of 4% and 5% Probiotic Formulations and Chlorhexidine Solution Against Pathogenic Bacteria

In this study, the antibacterial efficiency of probiotic mouthwash on 4 prevalent oral pathogens was investigated. To show the effectiveness of probiotic formulations, their MICs and MBCs were determined and compared with that of the negative control group and chlorhexidine as the positive group. Employing the Agar-diffusion method has been previously reported that the probiotic extract is a considerable antipathogenic activity against E. coli, Staph. aureus, Pseudomonas aeroginosa, and methicillin-resistant staphylococcus (7). Also, it has been reported that a formulated ice-cream containing probiotic extracted from Bifidobacteria is able to significantly reduce population of streptococcusmutans in secreted mucus (10). In another study, administration of probiotic powder of Lactobacillus cells in a 4 weeks duration significantly reduced microbial population in oral cavity. It was also shown that there is no side effect accompanied with the probiotic consumption (11). The effectiveness of dried probiotic cells on bacterial infections is also previously investigated (12). The main difference between the present study and previous report is the use of lyophilized extract instead of total extract or cellular mass of probiotics. The advantages of the method are being more stable and lack of the problems associated with survival of probiotic cells.

The results of acid lactic determination showed the maximum amount in 18 to 24 hours after cultivation. Stability studies in a 9 month course showed a few increase in pH (0.3 - 0.35). It is known that pH has a determinative impact on the pathogenic activity of probiotics. Therefore, the freeze-drying process was chosen to increase the extract stability and maintenance of its effectiveness. The result of well-diffusion method showed a significant decrease in antimicrobial activity of probiotic supernatant after 9 months of storage. In addition, the freeze-dried extract had a greater zone of inhibition in comparison with the fresh supernatant. The results of MIC determination on 4 pathogenic microorganisms (Table 2) confirmed that LPE may inhibit microbial growth stronger than primary fresh supernatant.

Then, LPE was used in preparation of antimicrobial mouthwash. The product was clear, homogenous, and also stable.

From this study, it can be concluded that the prepared probiotic mouthwash, due to its efficacy and safety, can be used for prevention of oral disorders, control of plaque growth, and germ accumulation on teeth and gingivae. However, it is needed for in vivo application, to clinically examine the oral cavity and the prepared mouthwash containing LPE in more detail.

The work was financially supported by the research council of Jundishapur University of Medical Sciences, Ahvaz, Iran.

Copyright © 2017, Jundishapur Journal of Natural Pharmaceutical Products. This is an open-access article distributed under the terms of the Creative Commons Attribution-NonCommercial 4.0 International License (http://creativecommons.org/licenses/by-nc/4.0/) which permits copy and redistribute the material just in noncommercial usages, provided the original work is properly cited
COMMENTS