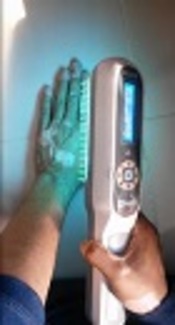 Vitamin D increases the contents of tyrosinase in cultured human melanocytes, which raises its possible role in modulating melanogenesis.

In this study, the level of 25 (OH) D was measured before and after NBUVB therapy and its relationship with outcome of NBUVB therapy in patients with vitiligo was also assessed.

This study was conducted on 30 patients with generalized vitiligo (less than 30% body surface) and 30 healthy individuals without age and gender limitations. The patients received NBUVB therapy 2 times a week for 15 weeks. We measured the serum vitamin D level and involvement area (VASI score, vitiligo area, and severity index) at baseline and 30 sessions post treatment.

Vitamin D did not improve clinical outcomes. Thus, we suggest that further studies be conducted to understand the mechanisms of pigmentation due to NBUVB therapy in vitiligo.

Vitiligo is a disorder that leads to the loss of epidermal melanocytes (1). Pigment cell destruction in different individuals can occur by several mechanisms including autoimmune phenomena, genetic disorder, the defect of free radical defense, accumulation of neurochemicals, and chemical substances (4-tertiary butyl phenol), psychological factors, and internal deficiency in melanocytes function. Recently, the role of vitamin D in the pathological mechanism of vitiligo and its probable effect on the treatment of the disease has received more attention (2). Autoimmunity plays an important role in pathogenesis of vitiligo, and it has been found that many autoimmune disorders are associated with low vitamin D levels.

UVB (ultraviolent beam) in the range of 280 to 320 could convert the 7-dehydrocholesterol to vitamin D3. Moreover, several studies have shown that UVB increases the serum vitamin D levels (5). Vitamin D may cause immature melanocytes to produce melanin in the hair follicle bulge by stimulating distinction between them and the effect on the endothelin receptor type B (6). The present study aimed at investigating the relationship between the rate of recovery of patients with their increased vitamin D levels compared to the base value.

Due to the high incidence of vitiligo in our society and its social and economic problems, we decided to conduct this study in the Iranian society to find the relationship between vitamin D levels and vitiligo disease.

This clinical trial was conducted on 30 patients with generalized vitiligo (less than 30% body surface), with no age and gender limitation, and with equal number of age and gender matched controls, who were referred to Imam Khomeini hospital from April 2015 to March 2016. This study was approved by the ethics committee of Ahvaz Jundishapur University of Medical Sciences, and all patients signed an informed consent prior to enrollment.

Patients with generalized vitiligo (less than 30% body surface), with no age and gender limitation, were included in the study.

1, Patients treated for vitiligo within 2 recent months; 2, those with concurrent diabetes mellitus; 3, thyroid disorder; 4, skin tumors; 5, other malignancies; 6, photosensitivity, 7, taking drugs of photosensitivity; and 8, accounts of previous intolerance or failure of phototherapy.

In this study, 35 patients with generalized vitiligo (less than 30% body surface), with no age and gender limitation, were enrolled.

Vitamin D level was measured by Electrochemiluminescence (ECL) (7). Of the individuals, 30 were selected as the control group, without restrictions on age and gender, and the level of 25 (OH) D was measured as a basis. We selected the control group from healthy people who referred to the dermatology department of Imam hospital for a check-up.

In vitiligo patients, 25 (OH) D was measured at baseline and after 30 NBUVB therapy sessions. During our study, patients did not receive any vitamin D supplement.

The intervention group received an initial dose of 0.3 J/cm2, the minimum dose, which makes erythema conditions, and then, it was increased to 20% in each visit until erythematous conditions subside. In the case of symptomatic erythematous skin, such as burning or pain and blister, we discontinued the phototherapy until the symptoms improved. We considered each unit of depigmented hand area as 1%.

The radiation dose for this subgroup was 20% less than the dose of radiation, which may create erythema or blister, and the dose increased by 10% in each session. The NBUVB phototherapy was given twice a week. Genitalia and eyes were covered to be protected against radiation. The VASI (Vitiligo Area and Severity Index) was measured to assess the response of vitiligo to NBUVB therapy at baseline and at the end of the study.

Levels of 25 (OH) D and VASI were calculated at 0 (baseline) and after 30 sessions of NBUVB therapy. Baseline [25 (OH) D] levels were measured in controls. The following formula was used to calculate the VASI.

The evaluation of depigmentation in a vitiligo patch is presented in Table 1.

Table 1. Evaluation of Depigmentation in a Vitiligo Patch

Table 3. A Comparison Between Vitamin D Levels in Two Groups of Vitiligo and Healthy Individuals at Baseline Levels of 25 (OH) in the Vitiligo Patients and the Controlsa

Table 4. Serum Vitamin D Level at Baseline and at the End-of-Treatment and Its Correlation with VASI Score in the Patient Group

Vitiligo is an acquired common skin disorder that occurs with the loss of skin pigmentation due to a decrease in melanin pigment, which is caused by destruction of melanocytes (8). To date, different theories have been presented about the destruction of melanocyte cells in vitiligo including autoimmune, neurogenic, and metabolic theories (9, 10). Some of the involved factors include imbalances of calcium, Apa1polymorphism of vitamin D receptor, and low levels of serum vitamin D (2). Patients underwent NBUVM therapy 2 times a week for 15 weeks. We measured vitamin D at weeks 0 and 15 (30 sessions) 2 times a week.

Since the circulating levels of 25 (OH) vitamin D change with any changes in the successful therapeutic sessions of NBUVB and because its surface is associated with clinical repigmentation, we became interested in conducting this study.

We found no correlation between level of serum vitamin D and the VASI score at baseline and at the end-of the treatment. This finding is consistent with a previously published study (11). The present study found that the NBUVB therapy could increase vitamin D level significantly compared with baseline, which confirmed the findings of previous studies (5, 12).

In any case, the role of TNFα and IL1 in melanogenesis is controversial and it has been seen in some studies. Englaro et al. found that TNFα inhibits the incidence and activity of tyrosinase, which is a key enzyme in melanin synthesis. The inhibition of melanogenesis by TNFα is secondary to nuclear factor-KB activation. IL1 causes stimulation of the synthesis of endothelin-1, which plays a role in mitogenesis and melanogenesis. Paradoxically, IL-1α reduces the proliferation of melanocytes and melanogenesis, while IL-1β reduces the tyrosinase activity on melanocytes without any effect on their proliferation. Imokawal et al. revealed that the incidence of endothelin-1, IL1, and tyrosinase in the human keratinocytes increases after UVB therapy in in vitro and in vivo, indicating the role of a possible mechanism in the repigmentation. Another mechanism of phototherapy is the release of PGE2 and pGF2. PGE2 is made in the skin, develops the performance of the melanocytes, regulates the Langerhans cells, and develops mitogenesis of melanocytes (4).

Level of vitamin D decreased after treatment in 3 patients (2 males and 1 female) with the initial normal level of vitamin D, which was at the normal range for male patients, but it was inadequate in the female patient; and this was consistent with previous studies (13, 14).

Such a similar relationship in response to 25 (OH) D to radiation and its relationship with initial level of 25 (OH) D in a study is seen in our sun bed in healthy individuals as well, but it was not associated with body mass index, oral intake of vitamin D, and gender. Furthermore, it was found that when 25 (OH) D level reaches above 100 mol /L, 24-hydroxylase synthesis also increases and 25 (OH) D is inactivated. Only 10% to 15% of the 7-Dehydrocholesterol can be converted into the previtamin D in response to sunlight. Some believe that only 7% of 7-Dehydrocholesterol can be converted into the previtamin D. Thus, it seems that the availability of the substrate may be variable: people with a base level lower than 25 (OH) D, which could also increase in response to UVB, have more availability of substrate compared to those with a higher base level of 25 (OH) (13).

In our study, the average area of secondary involvement (VASI Score) in patients was lower than the initial average area of involvement, indicating the effectiveness of NBUVB therapy in the treatment of vitiligo, which is consistent with previous studies (2, 15).

In accordance with previously published studies, current findings revealed that VASI score at the end-of-treatment decreased significantly compared with baseline. The results indicated that this decline in VASI score was attributed to the effectiveness of NBUVB therapy and increasing the serum vitamin D level, which can be used as adjunct therapy in association with NBUVB therapy.

In conclusion, NBUVB therapy is an effective and safe method for treating vitiligo and can be considered as an appropriate method for targeted patients. We found that vitamin D alone cannot clinically improve vitiligo, and perhaps it can be used as adjuvant therapy to reach the desired results more rapidly. As a final point, to make a better judgment on the role of vitamin D in the treatment of patients with vitiligo, conducting similar studies with larger sample size and long periods are highly recommended.

This study was supported by Ahvaz Jundishapur University of Medical Sciences (grant no: IR.AJUMS.REC.1394.18).

Copyright © 2017, Jundishapur Journal of Natural Pharmaceutical Products. This is an open-access article distributed under the terms of the Creative Commons Attribution-NonCommercial 4.0 International License (http://creativecommons.org/licenses/by-nc/4.0/) which permits copy and redistribute the material just in noncommercial usages, provided the original work is properly cited
COMMENTS