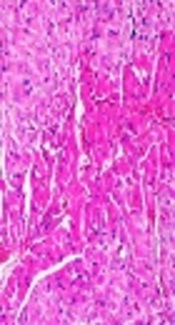 Arsenic trioxide (As2O3) is used for treating patients with acute promyelocytic leukemia (APL). The extensive application of this drug has been limited due to its severe cardiotoxicity. Montelukast is a selective leukotriene receptor antagonist with antioxidant and anti-inflammatory properties.

This study evaluated whether montelukast could protect against As2O3-induced cardiotoxicity in vivo.

Thirty-two male Wistar rats (150 to 200 g) were divided to 4 treatment groups: control (0.2 mL of saline, ip), As2O3 (5 mg/kg, ip), As2O3 plus MONT, and MONT (20 mg/kg, po). All drugs were administered daily for 10 days and pretreatment with MONT was performed 1 hour prior to As2O3 administration. Cardiotoxicity was estimated by electrocardiological, biochemical, and histopathological evaluations.

In conclusion, the current results demonstrated that montelukast possesses beneficial cardio-protective properties against As2O3 toxicity. It was also proposed that these protective effects were mediated by antioxidant modifications of montelukast.

Arsenic trioxide (As2O3) has been used in Chinese medicine for over 2500 years. It has been utilized successfully in the treatment of diseases, such as syphilis, tuberculosis, and malaria fever (1). Furthermore, As2O3 was approved by the United States food and drug administration (FDA) in 2000 for treating patients with hematological malignancies particularly for relapsed/refractory acute promyelocytic leukemia (APL) that is unresponsive to All-Trans retinoic acid (ATRA) (1-3). It may also be effective for some solid tumors in combination with other chemotherapeutic agents (1). Unfortunately, the use of this anti-neoplastic agent has been limited due to its fatal adverse effects, such as severe cardiotoxicity, hepatotoxicity, renal disorders, neurological defects, and type 2 diabetes (4). Cardiac abnormalities caused by As2O3, include QT interval (QT) prolongation, ventricular tachyarrhythmia, hypertension, torsades de pointes, endothelial dysfunction, and sudden death (5, 6).

Many studies have shown that generation of reactive oxygen species (ROS) and the resultant oxidative stress are the main mechanisms for arsenic pathogenesis (7-9). Reactive oxygen species cause alterations in various transcription factors, such as activator protein 1 (AP-1), Nuclear Factor Kappa B (NF-κB), and nuclear factor erythroid 2-related factor 2 (Nrf2), which are involved in antioxidant defense system (4, 8, 10). In addition, oxidative stress causes damage to cellular components (e.g. DNA, proteins, and lipids) and their functions (11-13).

Therefore, medications with considerable antioxidant properties would be valuable against oxidative damages induced by arsenic (14).

The aim of this study was to determine whether montelukast could protect against As2O3-induced cardiotoxicity in vivo in rat.

A total number of 32 male albino Wistar rats, weighing 150 g to 200 g were obtained from the animal house of Ahvaz Jundishapur University of Medical Sciences. The animals were kept under normal laboratory conditions of humidity (50%), temperature (22 ± 2°C) and a 12-hour light/dark cycle, and allowed free access to commercial rodent chow and water. This protocol was approved by the Local committee of animal ethics of Ahvaz Jundishapur University of Medical Sciences (No. AJUMS. REC. 1395.104), Ahvaz, Iran.

On the first day before any treatment and 48 hours after the last dose (12th day), all the animals were anesthetized using combination of ketamine HCL (100 mg/kg, IP) and xylazine (5 mg/kg, IP), and fifteen minutes after anesthesia, standard bipolar limb lead II electrocardiogram was recorded for 5 minutes in order to assess the QT interval. The QT intervals are influenced by heart rate (R-R cycle length), therefore, heart rate correction is required in the analysis of repolarization duration. Bazett’s formula is used for correcting the QT interval in the electrocardiogram for heart rate (R-R interval) (20).

Lead II ECG was recorded by Bio-Amp and monitored by a Power Lab system (AD-Instruments, Australia).

After recording the secondary electrocardiogram (12th day), animals were sacrificed under mild anesthesia with combination of ketamine and xylazine and blood samples were drawn by heart puncture. Serums were separated from the blood samples and utilized for the biochemical examinations. After blood sampling, hearts were dissected and excised in ice cold conditions. Then, they were weighed and 0.1 g of heart tissues were homogenized using a homogenizer (Heidolph Silent Crusher M, Germany) in 1 mL PBS (50 mM, pH = 7.4) and centrifuged at 3000 rpm for 15 minutes. The clear supernatants were collected and utilized for the evaluation of glutathione peroxidase (GPx) activity and lipid peroxidation extent.

Troponin is a very specific and sensitive indicator of heart muscle damage. It is measured in the blood to diagnose various heart disorders, including unstable angina, myocardial infarction, and acute coronary syndrome (21, 22). The quantitative determination of cardiac troponin-I in the serum was performed using an immunodiagnostic kit, purchased from Monobind, Inc. Lake Forest, CA (92630), USA. Assays were performed following the kit instructions.

Creatinine kinase-muscle brain (CK-MB) isoenzyme in the serum was determined by a standard diagnostic kit from Pars Azmun Co, Iran.

GPx acts as an endogenous antioxidant enzyme in numerous physiological processes. GPx catalyzes the reduction of hydrogen peroxide by reduced glutathione (GSH) and inhibits the oxidative stress insult. The activity of GPx was estimated using a standard diagnostic kit from ZellBio GmbH (Germany).

In brief, GPx uses reduced Glutathione (GSH) as an electron donor to convert it to glutathione oxidized (GSSG), and the remaining GSH can reduce 5,5’-dithio-bis-(2-nitrobenzoic acid) (DTNB) and produce a yellow color. The GPx activity is indirectly related to color generation at 412 nm.

Malondialdehyde (MDA) levels were assayed as an indicator of lipid peroxidation in biological samples, using a standard diagnostic kit from ZellBio GmbH (Germany). In this protocol, MDA-Thiobarbituric acid (TBA) adduct was generated by the reaction of MDA and TBA under high temperature. Thiobarbituric acid-reactive substances were determined in acidic media and heat (90 - 100°C) colorimetrically at 535 nm.

Heart tissue samples were fixed in formalin solution (10%) for 24 hours. The samples were then embedded in paraffin and tissue blocks were prepared. Heart tissue sections were stained by Hematoxylin and Eosin (H and E) and examined under a light microscope with 40× and 100× magnifications for morphological alterations.

One way analysis of variance (ANOVA) was performed to analyze differences between groups followed by LSD and Tukey’s post hoc test for multiple comparisons. P values < 0.05 were considered statistically significant. All results were expressed as mean ± SD.

At the beginning of the study, before drug administrations, all rats presented normal electrocardiogram (ECG) patterns and similar QTc intervals in different groups. However, 48 hours following a period of 10 days of drug administrations, normal control and montelukast-treated groups showed a normal electrocardiogram pattern, whereas rats that had received As2O3 showed a marked increase in QTc interval as compared to the control group (P < 0.0001). As shown in Figure 1, pretreatment with montelukast (20 mg/kg, po) 1 hour prior to As2O3 injection resulted in a marked decrease in the QTc interval when compared to the As2O3-exposed group (P < 0.0001). Figure 1. Values of QTc Intervals of Rats Based on Electrocardiogram Analysis

4.2. The Contents of Troponin I and CK-MB in Serum 4.3. The Level of GPX Activity in Heart Tissue

The GPX activity revealed a significant increase in heart homogenates of the As2O3-treated rats, when compared to the normal rats (P < 0.001). As shown in Figure 3A, pretreatment with montelukast (20 mg/kg, po) did not demonstrate a marked restoration in enzyme activity in the As2O3-exposed animals (P > 0.05). 4.4. The Level of Lipid Peroxidation in Heart Tissue

The extent of lipid peroxidation increased in heart tissues of the As2O3-treated rats. It was revealed by a significant increase in MDA levels in this group when compared to normal rats (P < 0.001). Pretreatment with montelukast, effectively prevented this elevation in the As2O3-treated animals (P < 0.05) (Figure 3B).

4.5. Effect of Montelukast on As2O3-Induced Cardiomyopathy

Results of histopathological examinations of myocardial tissues are shown in Figure 4. Heart tissue samples of control and montelukast-treated groups did not show morphological changes and normal myocardial tissues with clear nuclei were observed (Figure 4A, D). Moderate myocardial coagulative necrosis was detected in the heart samples of the As2O3-exposed animals as compared with those in the control group (Figure 4B). Co-treatment with montelukast, partly modulated morphological alterations in heart tissues of the As2O3-treated animals (Figure 4C). In the cardiomyocytes, arsenic induces oxidative stress via ROS formation. The ROS decrease the expression of anti-apoptotic factors, such as Bcl-XL and Bcl-2, and increase the expression of pro-apoptotic factors, such as Bad, Bax, and Bid. Simultaneously, ROS also disrupt the mitochondrial membrane potential via calcium imbalance and open the membrane pores, which trigger complex events, such as release of cytosolic cytochrome c, activation of pro-caspase, and consequently caspase 3 leading to cellular apoptosis (4, 8). Therefore, chemicals with considerable antioxidant properties have a fundamental role in defense against As2O3-mediated free radicals and the resultant oxidative damages (14).

The results indicated that QTc interval was prolonged in the electrocardiogram examination of As2O3-treated rats and oral pretreatment by montelukast attenuated this QTc prolongation (P < 0.0001). Pretreatment with montelukast also suppressed the elevated serum levels of cardiac markers, such as troponin I and CK-MB in response to As2O3 (P < 0.01).

Consistent with the current result,s an epidemiological study on Taiwanese cases living in an arsenic-exposed region demonstrated a direct correlation between QT prolongation in ECG pattern and tissue arsenic concentration (23). In another study, the prevalence of QTc prolongation in arsenic-exposed people was reported as 90% (24) and the underlying mechanisms of arsenic cardiotoxicity have been suggested as excessive generation of oxygen free radicals and oxidative stress (6, 24).

Numerous studies have shown that montelukast possesses considerable antioxidant and anti-inflammatory functions (16, 25). Protective effects of montelukast against oxidative stress have been attributed to a neutrophil-dependent pathway, ROS scavenging properties and inhibition of caspase 3 (14, 26, 27).

A recent study demonstrated that montelukast (20 mg/kg, IP) was effective in alleviating lipopolysaccharide-induced cardiac injury as evidenced by a decrease in serum levels of CK-MB, lactate dehydrogenase activity and alkaline phosphatase, and increase in GSH content in cardiac tissue homogenate with a concomitant decrease in MDA contents. Montelukast also decreased cardiac tumor necrosis factor α (TNF-α) expression and heart tissue morphological changes in comparison with the lipopolysaccharide group. This study suggested that the cardioprotective effects of montelukast could be attributed to its antioxidant and anti-inflammatory properties (28).

Based on the current results, montelukast may exert its cardioprotective effect against arsenic trioxide through its ROS scavenging properties and consequently, is capable of alleviating arsenic-induced changes in cardiac cells morphology, serum cardiac markers, and electrophysiological pattern.

The present found that As2O3 injection caused a marked increase in GPx activity and MDA formation in heart tissues (P < 0.001).

Recent studies have shown arsenic-induced Nrf2 activation. Nrf2 is a basic leucine zipper protein that attenuates arsenic-induced oxidative injury through increasing the gene expression of antioxidant enzymes, such as glutathione peroxidase, glutathione s-transferase, catalase and superoxide dismutase (4, 8). It seems that Nrf2 upregulates the gene expression of oxidative stress enzymes to rapidly return the induced enzymes to the baseline/normal levels or to maintain the endogenous antioxidant defense (8, 29).

A direct correlation between arsenic levels in tissue homogenate samples and lipid peroxidation was shown by several studies. Reactive oxygen species degrade poly unsaturated fatty acids and form MDA. The formation of MDA is used as an indirect biomarker to estimate the extent of oxidative stress in tissues (30, 31). In this study, pretreatment with montelukast could effectively decrease lipid peroxidation in the As2O3-exposed animals. The decrease in MDA levels may indicate montelukast as an effective ROS scavenger with potent antioxidant activity.

In summary, the findings of the current study propose that montelukast was effective in alleviating As2O3-induced myocardial injury as evidenced by preventing lipid peroxidation in heart tissue and decrease in serum troponin I and CK-MB levels. Additionally, montelukast prevented morphological changes in cardiac cells and consequently electrophysiological abnormalities. The valuable effects of montelukast, which have been observed in this work, provide a safe and inexpensive option for the prevention of cardiotoxicity of arsenic trioxide in patients with APL. However, such application of montelukast may need further clinical trials.