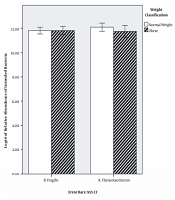 Obesity is a multifactorial disorder, and gut microbiota has a fundamental role in its pathophysiology. Bacteroides spp. has significant roles in gut microbiota- host interactions that determine health and disease development. Since the gut microbiota pattern changes based on different criteria in each population, we studied the abundance of two important Bacteroides strains, Bacteroides fragilis, and Bacteroides thetaiotaomicron, in Iranian obese and normal-weight subjects for the first time.

In this study, 100 participants were recruited and classified based on their body mass index (BMI). The subjects were divided into normal (average BMI, 22.37 kg/m2) and obese (average BMI, 29.10 kg/m2) groups. Bacterial DNA was extracted from the samples, and quantitative polymerase chain reaction (qPCR) was conducted based on 16s rDNA universal primers. Finally, the correlation between bacterial abundance and obesity was investigated.

Although obese subjects had more B. fragilis and B. thetaiotaomicron abundance compared to normal-weight subjects, no significant difference was identified between the two groups. Since Bacteroides spp. have significant role in gut microbiota-host interaction, determination of their abundance in obesity development and targeting restoration of gut microbiota pattern could be valuable in controlling obesity. In this regard, dietary intervention could be based on determination of gut microbiota pattern in certain populations.

The gastrointestinal tract (GIT) is colonized with a complex and dynamic microbial community known as gut microbiota (1). The gut microbiota plays significant role in human health and diseases (2). It has important effects on host functions, including homeostasis of the GI, metabolism, immune, and nervous system (3). This complex community is composed of diverse microorganisms dominated by bacteria. Most of these bacterial species belong to phyla Firmicutes and Bacteroidetes. Moreover, other phyla such as Verrucomicrobia and Actinobacteria are present in gut microbiota (4). The composition of gut microbiota is established during 2 - 3 first years of life under control of many factors, including mode of delivery, genetic background, geography, nutrition, physical activity, and gender (5).

It seems that Bacteroides spp. among the gut microbiota members has an important role in pathophysiology of obesity. Bacteroidetes are Gram-negative rods, anaerobic and non-spore-forming bacteria. Bacteroidetes spp. extract energy from protein and carbohydrates by fermentation (11). High enzymatic potentials of B. fragilis and B. thetaiotaomicron contribute in maintenance of homeostasis (12). Also, these bacteria have immunomodulatory effects that induce tolerance to gut microbiota (13). Hence, due to metabolic and immune potentials of B. fragilis and B. thetaiotaomicron, their frequency could be important in obesity treatment. Population criteria (genetic background, ethnicity, diet, lifestyle, geography distribution) could affect the gut microbiota pattern. Accordingly, in this study, for the first time, we focused on B. fragilis and B. thetaiotaomicron relative abundance in Iranian population.

A total of 100 healthy adults (age range: 20 - 60 years) were recruited. These subjects were assigned into two equal groups of normal and obese based on body mass index (BMI). Subjects with BMI between 18.5 and 24.9 kg/m2 were considered as normal group. Participants with significant infection, chronic diseases, and the use of antibiotics and corticosteroids were excluded. This study was performed in accordance with the ethical rules of the Helsinki Declaration.

The fresh stool samples were collected from subjects and stored immediately at -20°C. DNA was extracted using a QIAamp DNA stool mini kit (Qiagen, Hilden, Germany), following the manufacturer’s instructions. The quality of extracted DNA was assayed by agarose gel electrophoresis and spectrophotometric analysis. All DNA samples were stored at -20°C.

The abundance of bacteria was estimated by universal primers, which amplified a conserved region of the 16S rRNA gene. SYBR Green qPCR was conducted using Light Cycler® 96 SW 1.1 (Rocsh, Germany). Each reaction mixture of 20 μL was composed of SYBR Premix Ex Tag II (RR820L-Takara), 0.5 μL of each of the specific primers, and 5 μL of template DNA. The amplification program was designed according to appropriate annealing temperature consisting of 1 cycle of 95°C for 60 s, followed by 40 cycles of denaturation at 95°C for 5 s, annealing at 55°C for 30 s, and extension at 72°C for 30 s (14).

The abundance of bacteria was calculated through DNA concentration. For this purpose, serial dilutions of DNA from standard strain Escherichia coli were prepared. The standard curve allows to calculate DNA concentration of each bacteria in stool samples (15).

Table 1. Characteristics of Obese and Normal-Weight Adults
Table 2. The Relative Abundance of Bacteroides thetaiotaomicron and B. fragilis 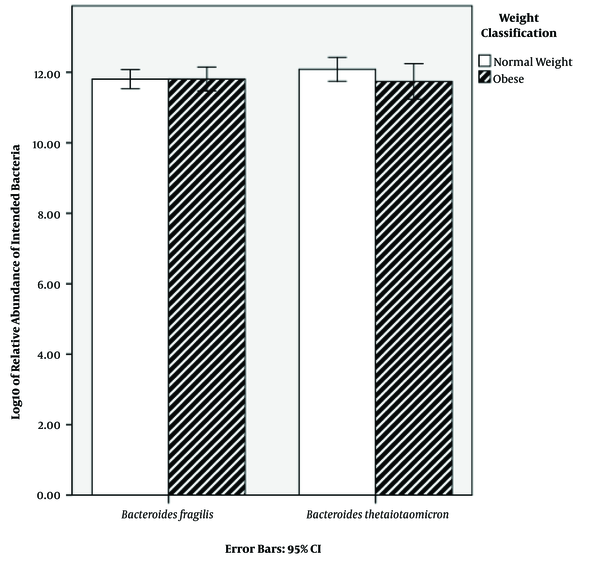 Comparison of relative abundance in Bacteroides thetaiotaomicron and B. fragilis in Normal and Obese Subjects

The gut microbiota is a diverse and complex microbial community which affects metabolism and energy homeostasis. The gut microbiota composition is associated with health and diseases (3). The pattern of gut microbiota has been established during the first 2-3 years of life and affects many aspects in the host, including immune cell functions, glucose and lipid metabolism, energy homeostasis, and susceptibility to disease (16, 17). The alteration of gut microbiota could be spotted as a biomarker in several disorders and diseases such as obesity (18-21). Bacteroidets has significant roles in gut microbiota-host interaction. Therefore, the determination of abundance could be valuable in controlling obesity, in this study, for the first time, the relative abundance of B. fragilis and B. thetaiotaomicron was determined in Iranian population.

Recently, a correlation between gut microbiota composition and obesity was identified (22-24). Various studies have reported that obese and non-obese subjects have different gut microbial compositions (14). Bacteroidets and Frimicutes are two important phyla that constitute gut microbial community. Bervoets et al. showed an elevated Firmicutes to Bacteroidetes ratio in obese children (14). B. fragilis and B. thetaiotaomicron are anaerobic intestinal commensal that belong to Bacteroidetes phylum. They have significant metabolic and immune potentials in gut microbiota-host interaction (13). Hence, their relative abundance could influence the host's metabolism.

There are various reports about abundance of B. fragilis and B. thetaiotaomicron. For example, Vael et al. proved that high intestinal B. fragilis abundance in infants between the age of 3 weeks and 1 year was associated with a higher risk of obesity in their adulthood (25). Karlsson et al. did not observe a significant difference between B. fragilis abundance in obese children compared to normal-weight subjects (26).

We would like to thank our colleagues at the Department of Mycobacteriology, Pulmonary Research and Microbiology Research Center of Pasteur Institute of Iran and the Medicinal Plants Research Center, Faculty of Pharmacy, Tehran University of Medical Sciences for technical assistance.