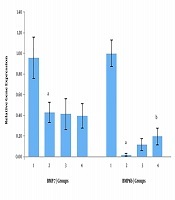 The present study aimed to investigate the antioxidative effects of hydro-alcoholic extract of Nigella sativa on the repair of oxidative damage caused by a high-fat diet. Also, Bmp7 and Bmp8b gene expressions were investigated on white adipose tissue of the rats and then compared with metformin effects.

Eighty rats were divided into two groups of prevention and treatment; then each set was divided into four sub-groups based on the administered diet (i.e., ordinary, fat, metformin, and extract of Nigella sativa). Lipid profile, paraoxonase1, malondialdehyde (MDA), HDL, and antioxidant capacity were measured in serum samples, and relative Bmp7 and Bmp8b gene expressions were calculated in white adipose tissue.

This study demonstrated that Nigella sativa extract has a protective role against oxidative stress in a high-fat diet.

Obesity is associated with excessive accumulation of tissue fat and is considered one of the world’s largest health problems, particularly in industrialized countries (1). Besides, it’s the most important growing risk factor of cardiovascular diseases, diabetes, and cancer among non-smokers (2, 3). Brown adipose tissue containing multiple cells has a mitochondrial abundance and expresses high levels of uncoupling protein 1 (ucp1) (4). Bone morphogenetic protein7 (BMP7) is a major factor for the differentiation of primary cells into brown adipose tissue (5, 6). Bone morphogenetic protein 8b (BMP8b) belongs to the transforming growth factor-beta (TGF beta) superfamily. BMP8b has multiple roles and, like BMP7, can stimulate the transition of white adipose tissue to brown adipose tissue (7). Obese people usually have higher levels of oxidative stress (OS) biomarkers, such as malondialdehyde (MDA) generated from the peroxidation of polyunsaturated fatty acids (8). As obesity persists, natural sources of antioxidants in the body begin to decline, which in turn causes more decline in the activity of anti-oxidative enzymes.

There are studies that mentioned to anti-obesity properties of herbal drugs such as Nigella sativa (9). Nigella sativa, black sowing, is an annual flowering plant, native to different regions of Southern Europe and some parts of Asia, which is widely using in the food and pharmaceutical industries. The main constituent of Nigella sativa seeds is thymoquinone (TQ) that holds properties to increases the activity of catalase, superoxide dismutase (SOD), and glutathione peroxidase (10). In this study, we examined the effects of Nigella sativa extract on the expression of Bmp7 and Bmp8b genes.

The results of the present study help to elucidate the process in which these genes cause weight loss after administration of Nigella sativa, which in turn offers new strategies to control the weight. Furthermore, its findings are useful for reducing obesity-related diseases in the community.

Nigella sativa seeds were purchased from a grocery in Shahrekord, Iran, and authenticated in the Medical Plants Research Center of Shahrekord University of Medical Sciences, Iran.

The hydro-alcoholic extract of Nigella sativa was prepared by maceration method. Initially, 300 g of the Nigella sativa was chopped in a suitable container, and 500 mL ethanol 70% was added and left at room temperature for one week. Then, it was filtered, and the solvent was evaporated using a rotary evaporator. Finally, it was concentrated at 37°C in the oven and kept in a fridge until use.

In this study, eighty-eight-week old male Wistar rats (180 ± 20 grams) were selected. Animals were housed in the standard and similar conditions (temperature 22°C ± 2, 12 hours of light and 12 hours of dark cycle) for one week. Afterward, the rats were fed with a chow diet and water. The study protocol was approved by the Ethics Committee of the Shahrekord Medical University (ethical code: IR.SKUMS.REC. 93.8.2, 22/11/2014). The Nigella sativa extract was prepared in standard practice under the supervision of a phytochemistry expert. Metformin was purchased from Sigma, USA, and dissolved in distilled water.

After one week, rats were divided into two sets, each with 40 subjects, as follows: set A (obesity prevention), treated for 45 days; and set B (obesity treatment); then, based on their weight, the rats were into 4 groups. Normal control groups had oral gavage with a volume of distilled water, equivalent with other groups. The second, third, and fourth groups were fed with a high-fat diet containing 57.5% animal chow, 15% saturated animal fat, 5% oil plant, 20 % sucrose, and 2.5% cholesterol (11). As oral gavage may cause shock in rats, to reduce the rats’ stress level, 1 mL distilled water once per day was administered along with oral gavage in the high-fat control group. The third group, along with a high-fat diet, received metformin 300 mg/kg/day by oral gavage (12). The fourth group, along with a high-fat diet received 200 mg/kg/day Nigella sativa extract (40 mg dried powder of extract which was dissolved in 1 mL distilled water) via oral gavage (13).

Rats were weighted every week at room temperature (25°C) with a digital scale (PAND, PX3000). At the end of each phase, animals were anesthetized using chloroform and blood samples were taken immediately from their heart. Then, samples were transferred into capped tubes with no anticoagulant, and the serum was separated by centrifugation. Glucose, cholesterol, triglycerides, alanine transaminase (ALT), aspartate transaminase (AST), and ALP were measured by an auto-analyzer (BT3000, Italy) using a commercial kit (Pars Azmon, Iran).

Serum MDA concentration was measured using HPLC (Agilent, USA) based on the Agarwal method (14). The MDA was separated on the C18 column at a flow rate of 1 mL/min and then detected using a fluorescence detector (excitation: 525 nm; emission: 560 nm). Total antioxidant capacity of serum was measured by the FRAP assay using 2, 4, and 6-tripyridyl s triazine (TPTZ) (Sigma Aldrich).

To extract RNA, a small piece of abdominal white adipose tissue was isolated from each rat and transferred into a microtube. RNA was extracted from white adipose tissue by trizol (Trizol Reagent- BIOFLUX Kit), and its quality and quantity were estimated using a nanodrop (thermo scientific nanodrop 2000 spectrophotometer, USA). The ratios of absorbance at 260 nm and 280 nm were used to assess the purity of RNA. Complementary DNA (cDNA) was synthesized using a cDNA Synthesis kit (Thermo Fisher Scientific Inc., Walthm, MA) according to the manufacturer’s protocol. RT-qPCR was performed using Rotor-gene system (Corbett Research, Sydney, Australia) and CYBR green kit (Thermo Fisher Scientific Inc.) by real-time PCR. Each 20 µL reaction contained 10 µL of SYBR Green PCR Master Mix, 1 µL of each forward and reverse primer (10 µM), 5 µL of RNase-free water, and 3 µL of cDNA (about 50 ng). Primers were designed using oligo 7 software. Amplified fragment length and primer sequences for the desired gene are provided in Table 1.

The products were amplified according to the following protocol: Initial enzyme activation at 95°C for 10 mins followed by 40 cycles of 95°C for 15 seconds, 61°C for 20 seconds, and 72°C for 25 seconds. PCR product size was 144, 90, and 116 base-pairs for beta-actin, BMP7, and BMP8b genes, respectively. The relative gene expression of the Bmp7 and Bmp8b gene was measured and normalized using beta-actin as an independent internal control gene by the comparative CT (ΔΔCT) method.

To determine the BMP7 and BMP8b expression at the protein level, abdominal white adipose tissue extracts were used. Initially, about 30 mg white adipose tissue was lysed in RIPA buffer (50 mM Tris-Cl, 0.1% sodium deoxycholate, 150 mM NaCl, pH = 7.5). The lysate was centrifuged, and the supernatant was separated, and the total protein concentration was measured using the Bradford method.

After washing three times with TBST buffer, the blots were incubated with antibodies against BMP7, BMP8b, and anti-β-actin (Abcam-Cambridge, UK). Blotting membrane was then washed, incubated for 90 mins with HRP-conjugated secondary antibody using rabbit IgG (Abcam-Cambridge, UK) and were visualized by 3,3,5,5-tetramethylbenzidine (Roche Diagnostics, Germany). The density of bands on a western blot was analyzed with Image G software.

Statistical analyzes were performed using the non-parametric Kruskal-Wallis test. Pair comparisons between the groups were performed by the Mann-Whitney test. All experiments were performed in triplicate. The results are expressed as the mean and standard error of mean (SEM). Statistical significance was considered when P value < 0.05.

Table 2. Summary of Test Measurements in Preventive set in Different Groupsa, b

Table 3. Summary of Test Measurements in Treatment Set in Different Groupsa, b 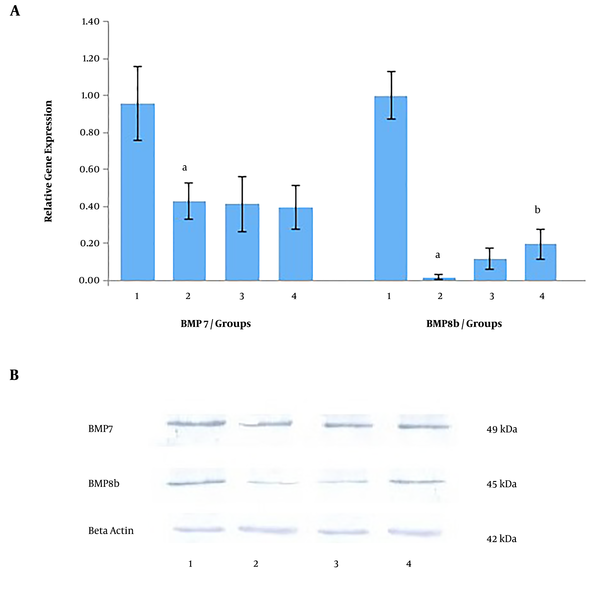 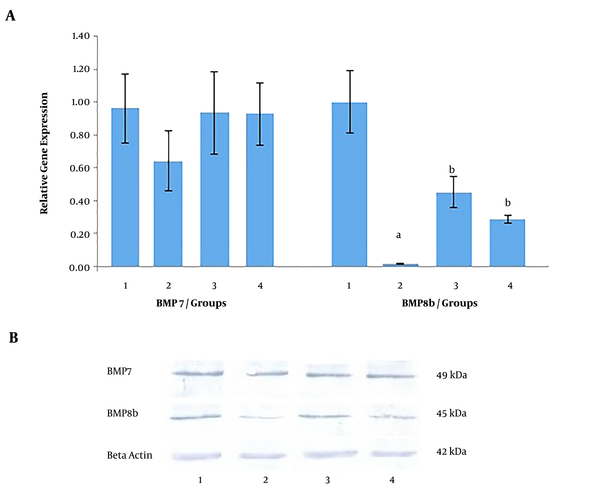 As shown in Figure 2B, western blot analysis confirmed the changes observed at BMP7 and BMP8b protein levels in the treatment set.

A study reported that administration of Nigella sativa was associated with decreased levels of MDA, as an ischemic marker (18). According to the previous studies, treating rats with Nigella sativa is associated with decreased total cholesterol, LDL-C, and TG and increased levels of total antioxidant capacity, catalase, superoxide dismutase, and HDL (19-21).

In this study, administration of Nigella sativa extract for 45 days in the prevention set was associated with a small reduction in TG, whereas the reduction in total cholesterol and the increase in total antioxidant capacity (FRAP) were very significant compared to untreated control groups. Besides, administration of extract caused a reduction in HDL-C, but it worth noting that the ratio of HDL-C to total cholesterol in the extract receiving group was higher than the high-fat diet group, which suggests the positive effect of the extract on lipoproteins level.

Ghatak et al. (22) reported that metformin could improve lipid profile and reduced oxidative stress, as well. In the present study, AST and serum MDA were increased after administration of metformin. Apparently, metformin could not reduce oxidative stress in the high-fat diet. As a result, the MDA level in the metformin group was increased compared to the high-fat diet group. Based on the findings, administering the hydro-alcoholic extract of Nigella sativa for 32 days resulted in decreased levels of TG and MDA and increased HDL, catalase, and FRAP. Increased antioxidant capacity and catalase activity in the Nigella sativa extract group can be attributed to polyphenol as an antioxidant compound and/or due to thymoquinone, which may increase the antioxidant capacity of cells.

Weight gain in the high-fat diet group, compared to the control group, indicates the effectiveness of the high-fat diet regimen. Brown adipose tissue is widely used for obesity and type II diabetes-related research (23-25). BMP8b induces thermogenesis in brown adipose tissue and produces more heat, instead of producing ATP in the body (7). Hence, the increased weight in the high-fat diet group can be attributed to the reduced Bmp8b in white adipose tissue, which is caused by the high-fat diet, the present study also suggested that metformin or Nigella sativa extract could restore the activity of Bmp8b. It’s proved that several processes contribute to BMP7 control, which may have a positive impact on obesity through influencing the appetite and mTOR pathway. Thus, targeting this signaling pathway can be considered as an effective approach in managing obesity (26). In the present study, BMP7 levels didn’t change significantly, thus it can be argued that weight changes are not correlated with BMP7 levels.

We gratefully thank the Research and Technology Deputy of the Shahrekord University of Medical Science, Shahrekord, Iran.