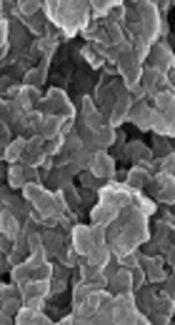 The color changes, UV-VIS spectra (SPR at around 442 nm within less than five minutes), XRD peaks (2θ: 38.18, 44.31, 64.61, and 77.50), FE-SEM-EDX data, and FTIR spectra confirmed the presence of AgNPs. PE-mediated AgNPs showed a high zeta potential (-68.93 mv), with an average particle size of 57.7 - 142.4 nm. The phytoconstituents of PE could act as both reductants and stabilizers. Photocatalytic degradation of MB dye was spectrophotometrically monitored using PE-mediated AgNPs as catalysts under sunlight irradiation. The absorbance of MB (2.557) was observed at 660 nm, which was reduced to almost 55 - 60% within one hour and degraded to almost 89% by 48 - 72 hours.

AgNPs were rapidly synthesized within five minutes using pomegranate PE, which could degrade almost 89% of MB dye within 48 - 72 hours under sunlight irradiation; this finding indicates the potential of this natural product, although further exploration is needed.

Since its discovery, nanoparticles (NPs) have attracted the attention of scientific communities. In the past few years, NPs have been extensively used in different areas, such as electronics, catalysis, microscopy, development of antimicrobial agents, and enhanced photocatalytic degradation of organic dyes (1). Generally, NPs are synthesized using chemical processes involving hazardous chemicals, reducing agents, and capping agents under controlled conditions. However, they are expensive, which may limit their widespread application in health and environmental fields.

Recently, several researchers have reported green synthesis of NPs, using microorganisms or plant-based products (2-10). Among different types of NPs, silver NPs (AgNPs) are reported to be synthesized, using different plant-based constituents for different applications, including antimicrobial, antifungal, antioxidant, and environmental purposes (11, 12). These green-synthesized NPs are as active as their chemically synthesized counterparts; additionally, they are rapidly synthesized and are environmentally friendly. Plant-based NPs are even easier to produce compared to microbe-based NPs, as they do not require preparation of any nutritive media for microbe cultivation or maintenance of sterility during cultivation.

Plants and their different parts (e.g., leaf and fruit) contain several reducing, oxidizing, capping, and stabilizing constituents, such as minerals, organic acids, phenolics, proteins, and enzymes, which promote synthesis of NPs (13). Pomegranate (Punica granatum) is one of the most important crops cultivated in Oman. This fruit has been widely used in culinary products and cuisines worldwide with medicinal values.

The pomegranate peel is an agrowaste, which accounts for approximately 60% of the weight of pomegranate fruit. The pomegranate peel extract (PE) is also known for its high-nutrient content, consisting of minerals (e.g., potassium), vitamins, phenolics, flavonoids, and antioxidants (14, 15). In the present study, we used and characterized pomegranate PE for synthesis of AgNPs from silver nitrate (AgNO3) and used it for photocatalytic degradation of methylene blue (MB) dye.

In this study, we evaluated the possibility of AgNP synthesis using aqueous pomegranate PE and examined its application in photocatalytic dye degradation. The synthesized AgNPs were characterized by various analytical tools and used for degradation of MB dye under solar irradiation.

3.2. Collection and Preparation of Pomegranate PE

Fresh pomegranates were purchased from the local farms of Al-Jabal Al-Akhdhar, a mountain range in Oman. After the fruits were washed with ultrapure water and cut, the arils were separated from the peels. The peels were chopped into small pieces, added to ultrapure water (1% w/v), boiled at 70 - 75°C for 15 minutes, and left to cool down. They were then filtered through Whatman® qualitative filter papers (grade I; Sigma-Aldrich, USA) and used for further experiments.

3.3. Biosynthesis and Characterization of AgNPs

To prepare AgNPs, pH of freshly prepared PE was adjusted to 8.0, and then, silver nitrate (final concentration, 1 mM AgNO3) was added and completely dissolved at ambient temperature (21 ± 1.5°C). PE and PE-mediated AgNPs were analyzed immediately and at different intervals for 48 hours via UV-VIS spectrophotometry (Nanodrop 2000c, Thermo Scientific, USA) at room temperature in a wavelength range of 190 - 750 nm.

The photocatalytic activity of biosynthesized PE-mediated AgNPs was evaluated by degradation of an organic dye (MB) under direct sunlight. For this purpose, 10 mg/l of MB dye stock solution was prepared in ultrapure water, and about 10 mg of biosynthesized AgNPs was added to 100 mL of MB dye solution. A control was also maintained without the addition of PE-mediated AgNPs. The solution was exposed to sunlight irradiation (outside temperature, 35 - 40°C), and the progress of reaction was monitored via UV-VIS spectroscopy. The values of absorption maxima (λmax = 660 nm) were compared with that of MB at different intervals after filtration.

AgNPs were synthesized using pomegranate PE as a reducing agent at ambient temperature. The color of the reaction mixture turned from pale yellow to dark brown, indicating AgNO3 reduction within five minutes, besides biosynthesis of AgNPs. The broad surface plasmon resonance (SPR) peak appeared at a wavelength range of 432 - 442 nm after five minutes of reaction time (Figure 1); the figure insert shows the color of PE (pale yellow) and PE + AgNO3 (dark brown). Other reports have indicated AgNP synthesis within 10 - 30 minutes, using peel or plant extracts, based on SPR peaks in the mentioned wavelength (16-18). The broad peak of UV absorbance at 432 - 442 nm is in accordance with previous reports (1, 19, 20). 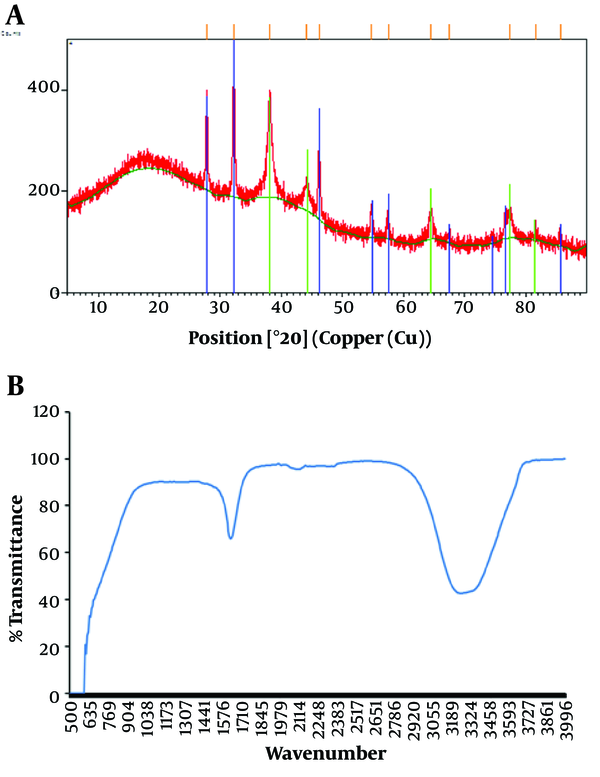 The results suggest that AgNPs were crystalline in nature. Other minor peaks were also observed, which might have emerged due to impurities and some unutilized AgNO3 in the samples. Karuppiah and Rajmohan (17) reported similar results for AgNPs synthesized by Ixora coccinea leaf extract. The FTIR peaks (Figure 2B) further supported PE-mediated AgNP formation. The FTIR spectrum showed major absorption peaks at 3286 cm-1, which corresponded to -OH stretching of phenolic and carboxyl groups, respectively. Furthermore, the absorption band at 1636 cm-1 was related to the presence of N-H bending of primary amines (11, 19).

The FTIR spectra indicated that the phytoconstituents of pomegranate PE, such as polyphenols, might be involved in the process of AgNP biosynthesis. The size distribution of PE-mediated AgNPs is presented in Figure 3A. According to the figure, it can be inferred that the average particle size distribution of PE-mediated AgNPs was 57.7 - 142.4 nm, and the corresponding zeta potential was -68.93 mV, suggesting the high stability of AgNPs. The high negative potential value could be attributed to capping of polyphenolic constituents in the pomegranate peel (19). 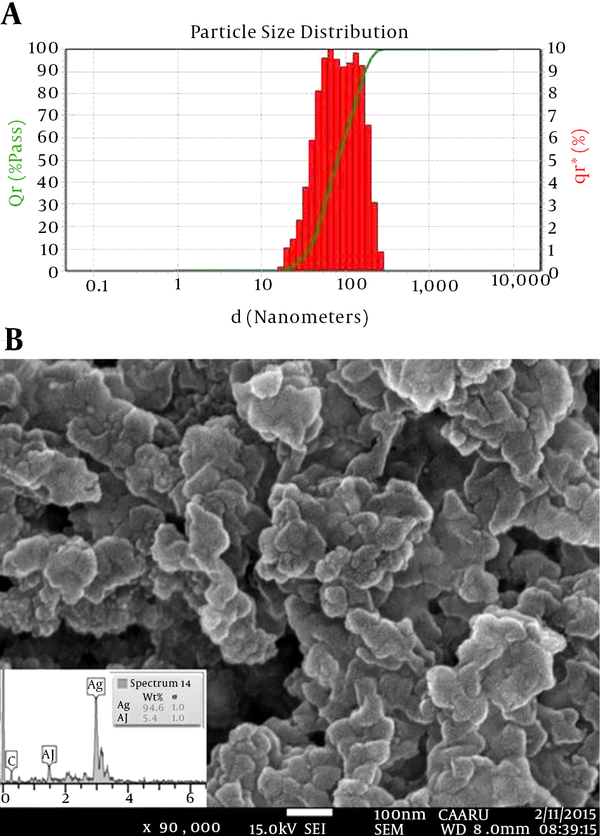 Figure 3. The particle size distribution (A) and FE-SEM-EDX analysis of PE-mediated AgNPs (B)

In addition, Padalia et al. (18) reported a zeta potential of -27.63 mV for Tagetes erecta flower-mediated AgNPs. The FE-SEM image of PE-mediated AgNPs (Figure 3B) at high magnifications showed them to be spherical, with a great agglomerate size range (60 - 150 nm). The elemental EDX analysis revealed strong peaks in the silver region (3 keV) at around 94.6 wt% and confirmed the formation of AgNPs (Figure 3B).

The catalytic activity of biosynthesized PE-mediated AgNPs was analyzed for degradation of an organic dye, MB, under solar irradiation. MB degradation was initially identified by visible color changes immediately after adding PE-mediated AgNPs. The deep-blue color of the dye changed into light blue-green within 30 - 60 minutes of incubation with PE-mediated AgNPs under sunlight. The absorbance of MB (2.557) was observed at 660 nm, which was reduced to almost 55 - 60% within one hour and degraded to almost 89% by 48 - 72 hours (Figure 4). 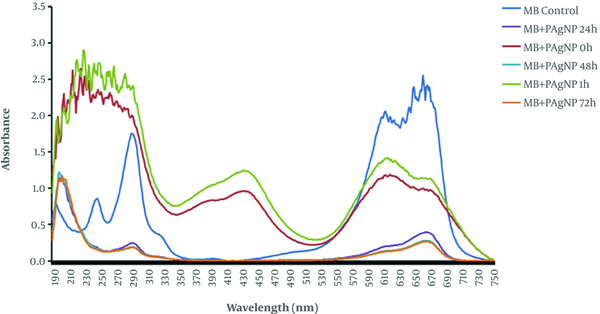 Figure 4. The UV-VIS spectra of MB (10 mM) reduction by PE-AgNPs as the catalyst

Figure 5 presents the proposed mechanism of AgNP biosynthesis in the presence of PE and photocatalytic effects of synthesized AgNPs. Kumar et al. (16) explained that this reduction in the absorbance peak of MB dye in the presence of NPs is related to the electron relay effect. 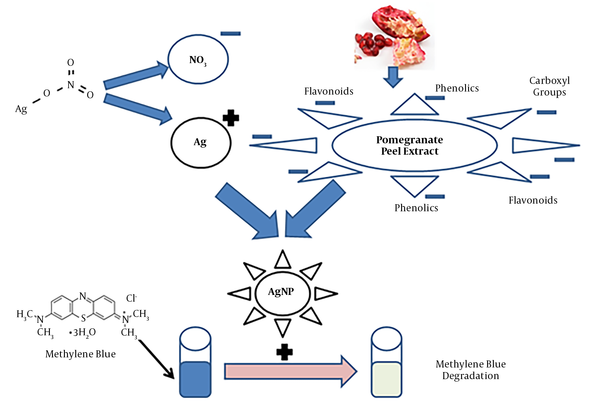 Figure 5. The proposed scheme of AgNP synthesis in the presence of pomegranate PE and its application in photocatalytic degradation of MB dye

AgNPs could be synthesized rapidly and successfully within five minutes, using pomegranate PE under ambient conditions. The polyphenol molecules in the pomegranate PE served two purposes as both reducing and stabilizing agents. The synthesized AgNPs showed effective photocatalytic activity.

The authors are grateful to the Central Analytical and Applied Research Unit, College of Science, Sultan Qaboos University of Oman for the FE-SEM studies, XRD analyses, and other research facilities and support. The authors also acknowledge DLS-zeta potential analysis by Fouzul Marikar at the College of Engineering, as well as FTIR analysis at the Department of Chemistry, College of Science, Sultan Qaboos University.

Copyright © 2018, Jundishapur Journal of Natural Pharmaceutical Products. This is an open-access article distributed under the terms of the Creative Commons Attribution-NonCommercial 4.0 International License (http://creativecommons.org/licenses/by-nc/4.0/) which permits copy and redistribute the material just in noncommercial usages, provided the original work is properly cited
COMMENTS