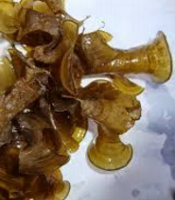 The main object of this study was to fractionate the seaweed Padina australis and analyze the antimicrobial activities of these fractions to isolate the bioactive compounds.

Padina australis was collected from the Persian Gulf and extracted by maceration with methanol-ethyl acetate solvent. The extract was evaporated and partitioned by the Kupchan method to yield hexane, dichloromethane, water, and butanol partitions. Dichloromethane partition was further fractionated by MPLC, and antimicrobial activity of the crude extracts and all fractions were investigated using disc diffusion and agar plate count methods. The MIC values of hexane, dichloromethane, chloroform, and butanol partitions and all fractions were calculated.

This study reveals that different fractions of P. australis have antimicrobial activities against various microorganisms.

Despite many signs of progress in the development and production of antibiotics, infectious diseases such as malaria, tuberculosis (TB), HIV/AIDS, and hepatitis are considered a global problem mainly in developing countries. Bacterial resistance practically to β-lactams (e.g., methicillin-resistant Staphylococcus aureus (MRSA)) and quinolones (e.g., fluoroquinolone-resistant Pseudomonas) has attracted many attentions to the research for novel and natural candidate drug, especially from marine sources (1).

Marine habitat is an important source of biologically active metabolites. A large number of marine compounds are different from terrestrial natural metabolites due to the unique physical and chemical conditions in the marine litter (2). So different marine organisms such as seaweeds, sponges, corals, fungi, and ascidians contain potent metabolites with characteristic structural and chemical features. In the field of marine plants, there are more than 2,400 marine natural compounds isolated only from seaweeds of subtropical and tropical populations (3).

A number of researches exhibited that seaweeds are important resources of natural drug development. They have different kinds of metabolites, such as terpenoid compounds, amino acids, steroids, phlorotannins, phenolic compounds, halogenated compounds, particularly ketones, glycolipids, and cyclic polysulphides (4). Novel structures and also novel mechanisms of action of these metabolisms have led to the isolation of bioactive substances, which show great potential as antioxidant, antimicrobial, anti-inflammatory, antioxidant, antimalarial, antitumor, and anti-Alzheimer activities (5-11).

More than 6,000 species of seaweeds have been identified around the world and are classified by their color to brown (Phaeophyta), green (Chlorophyta), and red (Rhodophyta). Some species of seaweeds have been used as a food source from ancient times (12). Dictyotaceae is a huge family of brown algae (class Phaeophyceae) with interesting secondary metabolites and biological activities. The genera such as calcareous, Lobophora, Distromium, Padina, and Dictyota belong to this family (13).

Iran has a rich resource of marines on its coastlines of the Persian Gulf and Oman Sea. A recent report has introduced more than 150 species of marine seaweeds from various provinces of this country. Despite the high amount of marine algae in this region, there have been only a few studies on the pharmacological properties of these seaweeds. The aim of the present study was to analyze the antimicrobial activity of extract and also various fractions of the brown alga P. australis collected from the Persian Gulf in order to isolate the active metabolites.

P. australis was collected in autumn 2015 from Bushehr, a Southwest coastline of the Persian Gulf Voucher specimens were coded in the herbarium of the School of Pharmacy and Pharmaceutical Sciences, Isfahan University of Medical Sciences and were identified by the Agricultural and Natural Resources Research Center of Bushehr as shown in Figure 1. 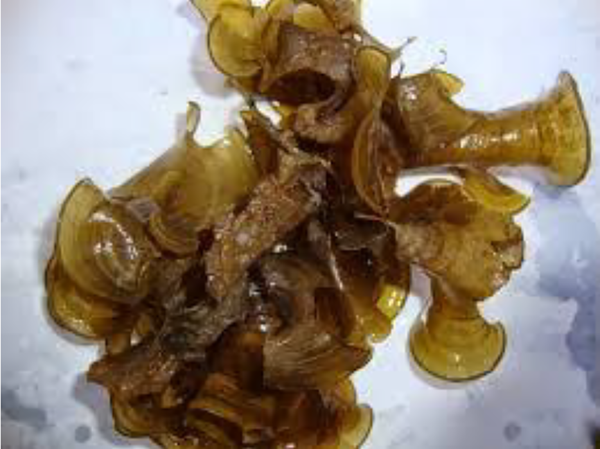 The seaweed Padina australis from the Persian Gulf.

3.2. Preparation of the Extracts

The algae were dried at room temperature in the shade, powdered, and then extracted by maceration method with methanol-ethyl acetate (EtOAc) (1:1) at room temperature. The extraction method was repeated four times, and the solvent was evaporated under vacuum and partitioned by the Kupchan method to yield hexane, dichloromethane, butanol, and water partitions. In this method, the extract was partitioned between MeOH 90% and hexane, MeOH 80% and dichloromethane, respectively. Finally, the MeOH solvent was removed completely, and the remaining water was partitioned with ButOH. The partitions were subject to antimicrobial test (14).

Dichloromethane extract was subject to MPLC. The stationary phase was Silica gel, and a gradient solvent system from pure hexane to 100% EtOAc was used as the mobile phase. The eluates were checked by TLC and 1HNMR spectra and were divided into 15 fractions (Fractions. 1 - 15) TLC was done on silica gel plates and hexane; EtOAc as the solvent. Fractions were further tested about their antimicrobial activity.

The hexane, dichloromethane, water, and butanol partitions of P. australis were dissolved in 1 % DMSO and passed through a 0.22 µ filter. The suspension of the test organism (107 CFU/mL) was inoculated to the Mueller-Hinton agar (MHA) plate (for bacteria) or the SDA plate (for fungi), and then 6 mm diameter sterile paper discs were placed on plates by a sterile forceps. The solubilized partitions were pipetted out onto the surface of paper discs and incubated overnight at 37°C and 25°C for bacteria and fungi, respectively. Each plate had a 1% DMSO paper disc as the negative control and a Cephalexin paper disc as the positive control. The next day, the diameter of the inhibition zone was measured to the nearest 0.1 mm by means of a ruler (15).

The antimicrobial activity of solubilized and filtrate partitions was also evaluated using the agar plate count technique. One hundred microliters of the partitions were added to molten MHA, or SDA inoculated with test organisms (105 CFU/mL). Three controls, first the plate inoculated with bacterial/fungal suspension without partitions. Second, the plate inoculated with bacterial/fungal suspension containing 1% DMSO (final concentration of DMSO in the partition plates), and finally, the plate without partition and the test organism were included. The plates were incubated overnight and the next day, the number of emergent colonies on each plate was counted. All tests were repeated three times (15).

The MIC of dichloromethane fractions was determined using tube dilution technique. The dried fractions were solubilized using DMSO and passed through a 0.22 µm filter. The fraction was added to the tubes containing a medium suitable for the growth of the test organism (Mueller-Hinton broth (MHB) for bacteria and Sabouraud Dextrose broth (SDB) for fungi) and six different concentrations of the fraction were made using serial two-fold dilutions. The suspension of the test organism (CFU/mL) was added to the tubes. Three controls, a tube was inoculated with bacterial/fungal suspension without the test fraction, a tube contained medium supplemented with 1% DMSO (final concentration of DMSO in the test tube) inoculated with bacterial/fungal suspension, and a tube without the test organism and the test fraction were also included. The tubes were incubated overnight at 37°C and 25°C for bacteria and fungi, respectively. Next day, the lowest fraction concentration that prevented visible bacterial growth was reported as the MIC. To determine the MBC, 10 µl of the contents of the tubes were plated on to MHA plate or SDA plate and incubated overnight at 37°C and 25°C for bacteria and fungi, respectively. The lowest concentration of the fraction that inhibited any residual colony formation was identified as the MBC. 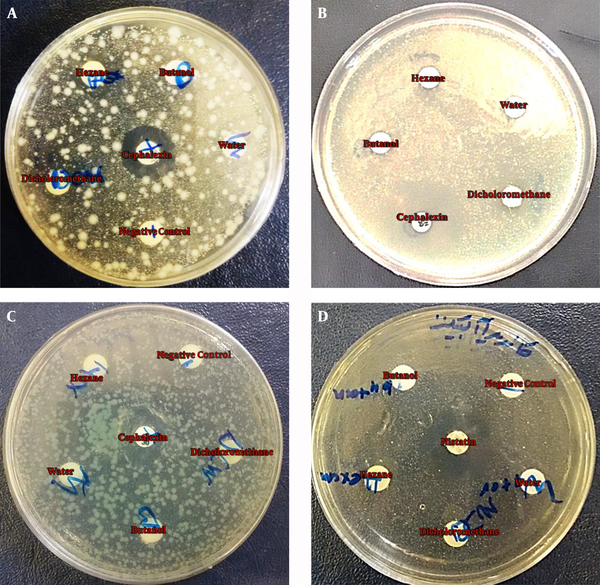 Table 1. Antimicrobial Potential of Four Partitions of P. australis to Decrease the Number of Colony Forming Units (CFU) on the Plate

Various types of compounds with different biological activities, such as antitumor, antimicrobial, antifungal, antiviral, and anti-inflammatory activities, have been isolated from marine sources, and these metabolites are unique sources of novel therapeutic agents (16-19). Marine organisms live in special communities with competitive and complicated habitats. They produce different secondary compounds to counter pressure, getting better space, predation, and tide dissimilarities. Some of these metabolites show antimicrobial activities that inhibit or reduce the growth of other microorganisms (20).

Metabolites from all three types of marine algae may be effective in controlling the development of bacteria, fungi, viruses, and other epibionts. The extracts from algae and also the fractions or purified compounds isolated from these organisms have also shown other pharmacological activities such as anticoagulant, antiviral, antioxidant, anticancer, and anti-inflammatory activities (21-25).

Besides, the genus of Padina has different types of macroalgae-containing antibacterial compounds that may inhibit the growth of human- and animal-related pathogens. In the present study, non-polar or less polar partitions (i.e., hexane and dichloromethane) of P. australis showed an inhibitory effect on the growth of three different bacteria and one fungus. The polarity of solvent, which was used to extract biologically active compounds from marine algae could significantly influence their antimicrobial efficacy. Both polar and non-polar compounds extracted from marine algae exhibited antimicrobial effects against various microorganisms with different modes of action. In agreement with our results, Shimaa M et al. reported that different partitions of P. pavonica could inhibit the growth of various microorganisms. Diethyl ether, methanol, ethanol, and chloroform fractions of this seaweed were tested against P. aeruginosa and S. aureus, and diethyl ether (The less polar one) fraction was the most active one (26). In another research, P. antillarum sample was subject to sequential extraction using organic solvents (i.e., hexane followed by diethyl ether, chloroform, EtOAc, acetone, methanol, and finally water). The hexane extract exhibited the highest and most consistent inhibitory activity against P. aeruginosa with a mean minimum inhibitory concentration (MIC, n = 3) value of 0.625 mg/mL (27). However, in another study on brown marine algae, P. tetrastromatica was extracted using diverse organic solvents of increasing polarity such as diethyl ether, chloroform, acetone, dichloromethane: methanol, and methanol. The obtained extracts were evaluated for antibacterial assays. It was found that methanolic extract (The most polar one) of P. tetrastromatica demonstrated the broadest and highest range of antibacterial activity (28).

We subjected the most effective partition, dichloromethane, to further fractionation by chromatography, which yielded 15 fractions among which three different fractions showed the most antimicrobial activity. Fractions 4, 7, and 11 demonstrated various degrees of inhibitory effect against different microorganisms, suggesting they may differ in their antimicrobial mechanism. Various bioactive compounds have different physicochemical properties (e.g., polarity, charge, and lipophilicity), which influence their interaction with cell wall, cell membrane, and other cell compartments of Gram-positive or -negative bacteria and fungi. Based on our results, these fractions showed a stronger inhibitory effect on Gram-negative (E. coli and P. aeruginosa) than Gram-positive (S. aureus) bacteria. This difference could be explained based on a thicker peptidoglycan layer in the Gram-positive bacteria and a double phospholipid bilayer in the Gram-negative cell wall (29). Furthermore, these fractions exhibited a less inhibitory effect on fungi compared with bacteria, which may be due to different chemical compositions of the cell wall in fungi and bacteria (30). Hitherto, it was unclear whether this antibacterial activity is produced by the macroalga itself or by secondary metabolite-producing epiphytic bacteria. In a study, Ismail and colleagues reported antibacterial activities of epiphytic bacteria isolated from P. pavonica (31).

In conclusion, this study shows that the seaweed extracts and fractions may inhibit the growth of different microorganisms, and it means that different fractions contain substances that may inhibit the growth of various microorganisms. The antibacterial activity of marine organisms may be due to the presence of different secondary metabolites such as flavonoids, tannins, and alkaloids. The metabolites isolated from different types of seaweeds that show potent antimicrobial activity belong to fatty acids, polysaccharides, tannins, pigments, lectins, alkaloids, terpenoids, and halogenated compounds (32) but whether this superiority of activity from fractions number 4, 7, and 11 means that it contains more potent antimicrobial principles or it contains compounds acting together synergistically or additively needs to be ascertained.