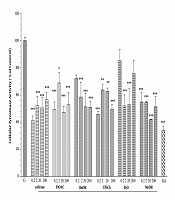 Pistacia is a genus of flowering plants from the Anacardiaceae family that grows in different parts of Iran. This genus has different pharmacological activities, including antioxidant, antimicrobial, anti-mutagenic, and anti-inflammatory activities.

In this study, we investigated the anti-melanogenic effect of different extracts and essential oil from unripe fruits of P. atlantica subsp. Kurdica on B16F10 cell line.

The inhibitory effect was determined on the synthesis of melanin, cellular tyrosinase, mushroom tyrosinase activity, and oxidative stress by the colorimetric and fluorometric methods.

The data showed that all different concentrations of various P. atlantica subsp. Kurdica extracts had no cytotoxic effect on B16F10 cells compared to the control group. Kojic acid as positive control had significant decreasing effects on tyrosinase activity, melanin content, and ROS production (P < 0.001). Different concentrations of P. atlantica subsp. Kurdica extracts decreased all measured parameters, including cellular tyrosinase and melanin content, as well as ROS production. Also, the essential oil concentration had no significant effect in this study. The major essential oil components were α-pinene 60.1%, myrcene 8.0%, and β-pinene 5.2%.

The melanogenesis inhibitory and antioxidant effects of P. atlantica subsp. Kurdica on B16F10 cells may suggest this plant as a new pharmaceutical agent in reducing skin pigment and aging in the cosmetic industry.

The pigment melanin is the main human skin substance that determines the color of human skin, hair, eyes, and a dark pigment produced by cells in the epidermis. Melanin protects skin cells against free radicals and UV irradiation (1). Freckles result from the increased activity of melanocytes and the accumulation of melanin in the skin (2). Tyrosinase is a metallo-enzyme responsible for the production of melanin in the skin. Tyrosinase inhibitors are used to treat hyper-pigmentary skin diseases and are usually present in skin whitening formulations (3). Tyrosinase is a key enzyme in the biosynthesis of melanin and is responsible for the darkening of the fruit and vegetables. Thus, compounds with tyrosinase inhibitory activities have dual roles and are used in the production of skin whitening cosmetics; also, pharmaceuticals are widely used in the food industry.

UV irradiation, stress, aging, and air pollution are inducers of hydrogen peroxide (H2O2) and other reactive oxygen species (ROS) in the melanogenesis process. The accumulation of free radicals in the skin leads to the destruction of cells, inflammation, a decrease in collagen synthesis, an increase in melanin synthesis, and DNA damage. They are ultimately manifested as wrinkles and hyperpigmentation (2). Antioxidants in the body are among the most significant defense mechanisms that reduce and neutralize free radicals to delay aging and prevent skin damage (4).

Pistacia, a genus of flowering plants belonging to the Anacardiaceae family, grows in different regions in Iran. Pistacia atlantica subsp. Kurdica is a tree over 25 m in height, and its local name is “Baneh”. Different parts of the plant are used in folk medicine for various treatment conditions, such as eczema, kidney stones, throat infections, upper abdominal discomfort and pain, peptic ulcer, oral diseases, dyspepsia, diarrhea, and asthma (5, 6). Several biological properties, such as anticancer, antioxidant, antipyretic, antimicrobial, antibacterial, anti-inflammatory, antiviral, anti-diabetic, anti-radical, and cytotoxic activities can be partly attributed to phenolic compounds present in the plant (7-9). However, there are no scientific reports on the anti-melanogenesis inhibitory activity of P. atlantica subsp. Kurdica.

Unripe P. atlantica subsp. Kurdica fruits were collected in May 2014 from Kermanshah, West Iran. Voucher specimens were identified in the herbarium of the Faculty of Pharmacy, the Mashhad University of Medical Sciences, Mashhad, Iran. Unripe P. atlantica subsp. Kurdica fruits (225 g) were extracted with pure methanol for 24 h using the percolation method at room temperature according to the previously reported protocol. The whole methanol extract was filtered, and the solvent was evaporated using a rotary evaporator and then freeze dried to afford a crude methanol extract. This extract (100 g) was then suspended in 95% methanol and successively partitioned between n-hexane, dichloromethane, ethyl acetate, n-butanol, and water.

3.2. Isolation of the Essential Oil

B16F10 (melanoma cell line, Cat. No.: C540) was purchased from the Pasteur Institute (Tehran, Iran). The extract activity in each experiment was calculated using the following formula: % of activity = (Absorbance of the sample × 100)/Absorbance of the control.

Resazurin is a non-toxic, non-fluorescent, and cell-permeable cell health indicator that converts to a highly fluorescent and red compound, called resorufin, after reducing cytosol of live cells (10, 11).

Tyrosinase activity was determined by spectrophotometry following the oxidation of DOPA to DOPAchrome (10).

3.9. Determining the Level of Cellular ROS

The reactive oxygen species level with minor modifications was measured, as described previously (10).

All experiments were repeated in triplicate, and the relative results were presented as the mean ± SD of the three different measurements. Variance analysis was performed using a one-way ANOVA test with GraphPad Prism 6.0 to examine quantitative differences between the groups. The means were compared by Dunnett tests. P < 0.05 was considered statistically significant.

Resazurin assay was performed to monitor cell viability. B16F10 cell lines were seeded in a 96-well plate. After 24 h, cells were treated with different concentrations (0.2 - 200 µg/mL) of P. atlantica subsp. Kurdica fractions and essential oil. The results showed that the fractions had no significant cytotoxic effect on B16F10 cells at the above concentrations, although the 200 µg/mL concentration of the essential oil had a cytotoxic effect. Doxorobicin as a positive control significantly induced cell death (P < 0.01) (Figure 1). 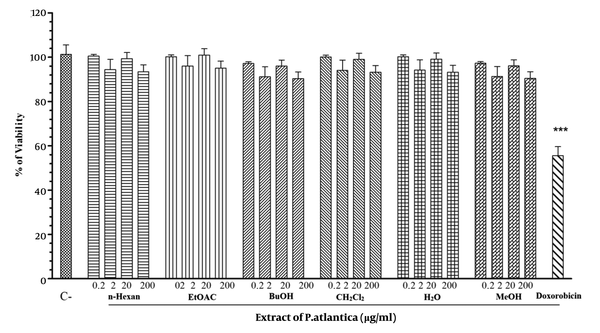 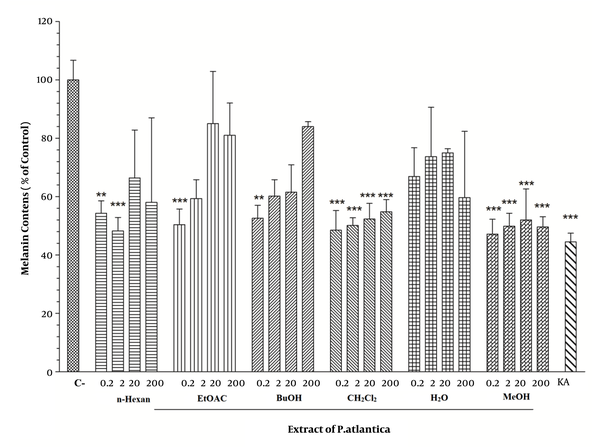 The effect of P. atlantica subsp. Kurdica on the melanin content in B16F10 murine melanoma cells. Data are expressed as mean ± SD for triplicate samples. 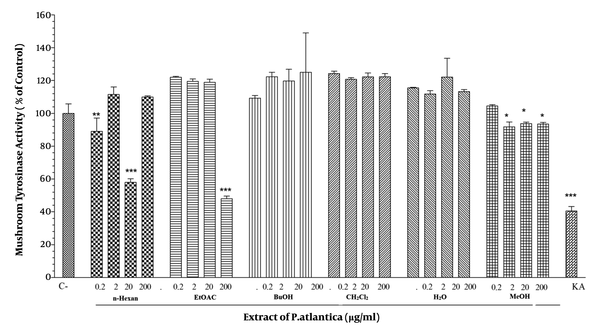 The effect of P. atlantica subsp. Kurdica fractions on mushroom tyrosinase in B16F10 murine cells. Results were expressed as percentages relative to the control and are presented as mean ± SD of triplicate samples. 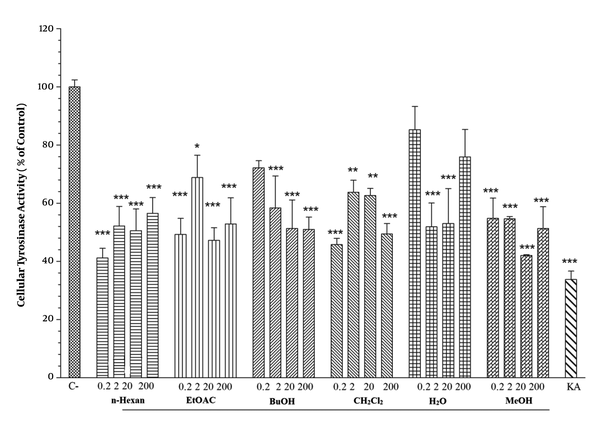 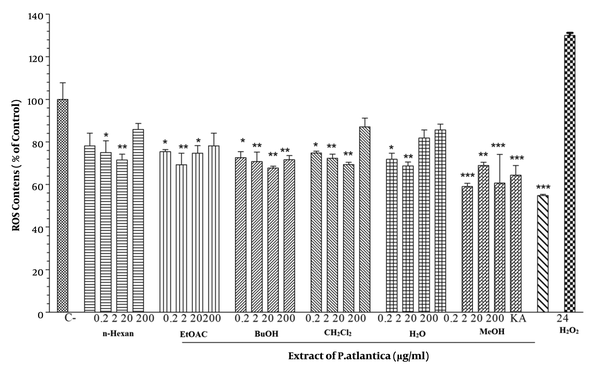 Chemicals and natural base preparations are widely used to prevent skin hyper pigmentation disorders. A major factor determining skin color is melanin that prevents UV induced skin damage. The melanin content change in the skin is correlated with conditions such as leukoplakia, albinism, freckles, melasma, moles, and lentigo. The main treatment strategy for over-pigmentation diseases is the application of skin whitening agents. Arbutin, hydroquinone, and kojic acid are among the numerous compounds used for pigmented skin (14).

In this study, different P. atlantica subsp. Kurdica extracts (MeOH, CH2Cl2, EtOAC (0.2 µg/mL), and n-hexane (2 µg/mL)) significantly decreased melanin synthesis without showing cytotoxicity. It was found that all the extracts had a tyrosinase inhibitory effect on B16F10 melanoma cells.

There exist a number of mechanisms to regulate melanogenesis (16). Tyrosinase is the rate limiting enzyme of melanogenesis and the most common target for depigmenting agents. Ascorbic acid, phenolic compounds, thio-containing compounds, and kojic acid used for whitening ingredients inhibit tyrosinase enzyme activity (1).

Antioxidants have been widely used to prevent and treat disorders related to oxidative stress in dermatological disorders such as wrinkle forming and aging, both experimentally, or in cosmetic industry. It has been reported that free radicals and reactive oxygen species (ROS) cause skin inflammation and ageing (18, 19). ROS and UV-irradiation stress plays a major role in photo-aging (10, 20). Moreover, antioxidants play an essential role in reducing oxidative stress or damage in the human body, and flavonoids and phenolics have shown effectiveness in reducing melanogenesis (21, 22).

Taken together, a decrease in ROS production, the tyrosinase protein level, the amount of melanin in cells, and the mushroom tyrosinase activity indicate the inhibition of melanogenesis in B16F10 cells by P. atlantica subsp. Kurdica. Based on our results, anti-tyrosinase and anti-melanogenic effects are due to the presence of polar compounds, and not non-polar and volatile compounds, in the extract. Hence, P. atlantica subsp. Kurdica with dual anti-melanogenic and antioxidant actions may contribute to skin whitening compounds and could be included in cosmetic formulations of skin care products.