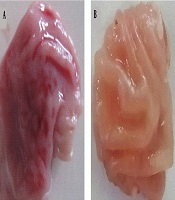 Several plants are used as analgesic in traditional medicine. Capparis spinosa (C. spinosa) is widely used for the treatment of gout and rheumatic arthritis. The previous studies have reported the antinociceptive effects of this plant.

The study was aimed at examining the C. spinosa’s gastric-ulcerogenecity effect in comparison to indomethacin.

The percolated extract of C. spinosa and Indomethacin were orally administered to the rats at 50,100, 200, and 400 mg/kg doses, which were slaughtered after 4 hours. The stomach was detached, and 10 mL of 2% formalin was injected into it to fix the gastric wall internal layer. The stomach was then split by cutting along the greater curvature, and the lacerations in the glandular section examined. J-score was used to determine ulcer index.

The results indicated that percolated extract of C. spinosa administered orally in antinociceptive dosage and even 2,4 and 8 folds did not cause a gastric ulcer (J-score = 0) compared to indomethacin (J-score = 46 to 253) (P < 0.05).

Concerning the favorable analgesic effect of C. spinosa and lack of gastric ulcerogenecity effects, it seems to be a suitable choice for more pharmacological and toxicology examinations to use as analgesic.

As a defensive mechanism, pain happens in humans and animals when the tissue is damaged, whose lack of control ends in bad consequences for the physiologic and psychological states of the patient (1). Analgesics fall into opioids and non-opiates (2). Opioids have a role in relieving acute and chronic pains through the central nervous system. Morphine and codeine are considered as two important medicines in this group. It is indicated that chronic use of opioids results in the emergence of analgesic tolerance, physical dependence, and an increase in the sensitivity to pain, and finally, dependence in humans and animals (3). Non-opioids analgesics entail non-steroidal anti-inflammatory drugs (NSAIDs), selective COX-2 inhibitors, and acetaminophen. NSAIDs, including indomethacin, aspirin, and ibuprofen exert their analgesic functions by inhibiting cyclooxygenase enzyme. The prevalence of adverse effects varies among NSAIDs (4). The commonest complication of NSAIDs is gastrointestinal side effects because excessive use of these drugs may be related to gastrointestinal bleeding, and chronic consumption may end in degeneration of the gastric mucosa (5, 6).

Owing to the numerous side effects of these medicines in pain relief, finding a new choice with fewer side effects seems critical. The common medicinal plants have been examined by many researchers, given their availability and less complication (7). Capparis spinosa (C. spinosa) is a plant growing in hot and dry climates, such as various parts of Iran, especially in the Alborz, Northeastern Baluchistan, and Shiraz (7, 8). Given the valuable compounds like flavonoids, saponins, and pectin in different sections of this plant, analgesic (1, 9), anti-inflammatory (10), lipid profile modulation (11), antioxidant (12), and anti-allergic (13) impacts have been shown. In several studies, the antinociceptive effects of C. spinosa have been reported mainly because of the stachydrine content (14, 15). Considering the above mentioned and, most importantly, the significant antinociceptive and anti-inflammatory properties of this plant, it seems to work like NSAIDs and may have the effect of ulcerogenecity on the stomach.

Therefore, it is necessary to control gastrointestinal complications. This study was designed to investigate the effect of gastric-ulcerogenecity of C. spinosa percolated extract on stomach rat and compared to indomethacin.

In this study, 40 male Wistar rats weighing 200 to 250 grams were obtained from the physiology-pharmacology Research Center of Kerman University of medical sciences, Iran. Animals were housed in polycarbonate cages under 24 ± 2°C room temperature with a 12-hour light/dark cycle and adlibitum access to food (Plate prepared by Pars Industrial Company of Iran) and water (Urban Purified water). All experiments were performed in accordance with the guidelines set by the ethical committee of Kerman University of medical sciences (code: IR.KM.REC.1389.84) and the European community’s council directive 24 November 1986 (86/609/EEC).

C. spinosa was obtained from around Fasa (Fars Province). After being identified by the botanist from the Kerman Faculty of Agricultural, its fruits were dried in the shade. Later on, the fruits were ground with the powder used for extraction using the percolation method. Firstly, the powdered fruits were macerated in a solvent (80% methanol) to get the complete extract through the percolation method. Later on, it was poured into a container, percolator, and extraction was done at environment temperature (20°C to 15°C) using the flowing fluid. For preparing oral solution and administration.

3.3. The Procedure for Preparing Oral Solution and Administration

The complete fruit extract was condensed using a distillation tool under a vacuum. Following evaporation of the solvent, a fully dry powder was obtained. Later on, the mass of extract, the total crude dried extract weight was measured using an electronic scale, and the concentration of the solutions was prepared using normal saline solvent. Based on the previous studies, the doses in this study were 50, 100, 200, and 400 mg/kg, respectively (16, 17).

In the study, the animals were divided into eight groups randomly using five animals in every group as follows: The groups from 1 to 4 were used as experimental group, got C. spinosa extract at doses 50, 100, 200, and 400 mg/kg orally. Groups 5 to 8 were used as positive control and received daily indomethacin at doses 50, 100, 200, and 400 mg/kg orally. Twenty-four hours prior to the test, all of the animals were taken to the lab and kept in special cages (with netting) for passing the animal stool. At this time, the animals just had access to water. Then 24 hours later, the animals in each group got 50, 100, 200, and 400 mg/kg of extract or indomethacin. Four hours following the administration of the extract or indomethacin, the animals were slaughtered using ether, their stomach removed immediately, and 10 mL of 2% formalin injected into the stomach for fixation of the internal layers of the gastric wall. Twenty minutes later, the stomach was cut from its larger curvature, and the number of ulcers was counted. The length of each wound was measured and recorded as well. J-score (Ulcer index, UI) was used to get the ulcer severity (18, 19). J-score was calculated with the help of the following formula:

For determining the significant differences between experimental groups, student t-test, ANOVA and Newman-Keuls were used. A P-value < 0.01 was considered the significant level.

The effect of gastric-ulcerogenecity of C. spinosa percolated fruit at the dose of 50, 100, 200, and 400 mg/kg was compared with indomethacin at similar doses. The effect of gastric-ulcerogenecity following indomethacin injection is shown in Figure 1. Comparison of UI (J-score) showed that the index was significantly lower in all the groups receiving C. spinosa than the recipient of the indomethacin (P < 0.001) (Table 1). Reviewing each of the doses studied in different groups, Figure 2, also confirms this issue. As shown in this figure, treatment with the several doses of the C. spinosa percolated extract (50, 100, 200, and 400 mg/kg) did not cause any injury in the stomach of rats (UI = 0), while the administration of indomethacin suspension, at the same doses, caused a number of ulcers at the same doses (UI = 46 to 253), which was statistically significant (P < 0.001).

Table 1. Comparison of UI at Several Doses in Different Groupsa, b

bComparison of UI showed that this index was significantly higher in different doses receiving the indomethacin than the recipient C. spinosa percolated fruit (P < 0.001). 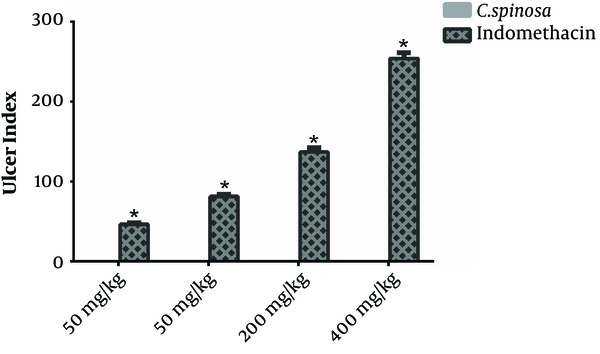 Effects of gastric-ulcerogenecity of C. spinosa compared with indomethacin at the different doses. Comparison of UI showed that treatment with the several doses of the C. spinosa percolated extract did damage the stomach of rats (UI = 0), which was lower statistically than that of the indomethacin groups. C. spinosa, Capparis spinosa; UI, Ulcer index. Data are represented mean ± SEM. *, P < 0.001 versus C. spinosa group.

C. spinosa is one of the plants in Iranian traditional medicine used for reducing pain whose analgesic effects have been reported in several studies. It was initially seen that 50 mg/kg of the fruit extract of this plant entails a good analgesic effect (20, 21). The study investigated the gastric ulcerogenecity effect of C. spinosa extract on rats compared to indomethacin, so the impact of wounding some doses with the same doses of indomethacin was examined. Based on the findings, the ulcer made by the administration of the extract was not observed in any of the doses examined.

The progress in pharmacy technology and the synthesis of chemical medicines and its wide application to diminish pain were related to bad complications. Nonetheless, herbal remedies can act as a proper replacement to synthetic chemical medicines given their fewer consequences and costs (22). In a study entitled “analgesic and wound healing effect of methanol extract of chamomile flowers”, Heidari et al. (23) showed that this extract has no gastrointestinal impact, and its analgesic impact is not affected through the opioids system probably because of anti-inflammatory activity. In another study on antinociceptive effect of methanol extract of C. ovate in mice, Arslan and Bektas (17) indicated that 50, 100, and 200 mg/kg doses of extract showed significant antinociceptive effect compared to the control group. Sini et al. (24) showed protective effects of C. zeylanica extract on gastric lesions in experimental animals using aspirin and indomethacin. Also, in a similar study, the extracts of the Artemisia dracunculus extract from the percolated method at 800 mg/kg dose had the most analgesic effects compared to the control group. Also, it has been shown that the extract has a more analgesic effect than aspirin. Ulcerogenecity studies of Artemisia dracunculus extract in the gastric mouse, it was determined that the single dose of this extract does not have ulcerogenecity effects (25). The results of these studies are consistent with the results of our study. In a similar study conducted by Heidari et al. (26). On The analgesic effect of tribulusterrestris extract at 400, 200, and 100 mg/kg doses, it was found that all three doses had ulcerogenecity effect in the gastric mouse, while the results of our study showed that the fruit extract of the plant does not cause any ulcer in the gastric rats at different doses. Behravan et al. (27) showed that gastric ulcerogenecity of percolated extract of Anacardium occidentale at the doses of 300, 400, and 800 mg/kg was less than the similar doses of indomethacin. The results of this study showed that administration of different doses of fruit extract of C. spinosa in male rats compared to indomethacin had no ulcerogenecity effect. For a more accurate examination of the effects of this extract, studies on cellular, molecular and histopathological effects with specific staining are suggested.

Considering the potential antinociceptive effects reported for C. spinosa extract and due to the lack of observation of the ulcerogenecity effect of this plant, it seems that by further research and identifying the effective substances of this plant, an appropriate analgesic can be provided with minimal gastrointestinal complications.