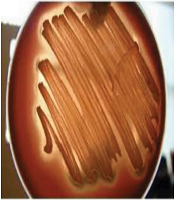 Biosurfactants are a group of valuable amphiphilic molecules that have been widely used in different industries such as pharmaceuticals and cosmetics.

The current study aimed to screen and identify a bacterial strain able to produce biosurfactant from environmental soil samples, followed by evaluating factors that contribute to biosurfactant production.

The biosurfactants production was evaluated every 24 hours by emulsiﬁcation index (EI), oil spreading ability, and surface tension measurement. Thereafter, the sequences of 16S rDNA genes and biochemical tests were performed to identify the isolated bacterial. Furthermore, the effect of different factors, including nitrogen, vegetable oil, and cations on biosurfactant productivity of the selected bacterial strain, was also evaluated.

In primary screening, out of the six bacterial strains, only one isolate was found to produce a hemolytic zone on the blood agar plate. The EI index was increased in a time-dependent manner with a maximum EI of 10% after 12h. Surface tension measurement revealed decreased surface tension (51 mN/m) after 12 hours' incubation compared to that of the blank sample. The selected isolate was recognized as Bacillus atrophaeus by 16S rDNA gene sequencing and biochemical test. All applied factors in culture media could decrease the surface tension of culture broth compared to that of the blank sample.

This study demonstrated a Bacillus strain able to produce biosurfactants. Such biosurfactant producers would have great potentials in bioremediation activities and microbial enhanced oil recovery.

Biosurfactants, produced by a wide spectrum of microorganisms, are amphipathic molecules that reduce surface tension (1, 2). Biosurfactants are classified in lipopeptide, lipoproteins, glycolipids, phospholipids, and polymeric, according to their origin and nature of chemical structures (3, 4). Compared to chemo-synthetic surfactants, biosurfactants have been shown to have many advantages. In addition to being environmentally friendly, biodegradable, less toxic, non-hazardous, and have stability in extreme pH, salinity, and temperature (5). Hence, potentially can be used as surfactants and emulsifiers in the pharmaceutical (drug delivery), cosmetics (foaming agent), and food industries (emulsifier and stabilizer) (6, 7). Nowadays, despite the complicacy of producing biosurfactants, they are used in many cases other than chemical surfactants. Despite all these advantages, the greatest limitation of using biosurfactants on a large industrial scale is high production costs (8). Bacteria strain such as Bacillus, that can survive in harsh environments for a long time, are generally known as biosurfactants producers (9). Several studies have investigated the isolation of Bacillus species, as biosurfactant producers, from saline and hypersaline soil sample (10, 11).

Soil samples were collected from different locations of saline and hypersaline environments in Kerman, Iran. One gram of each soil sample was then added to 20 mL sterile normal saline and mixed well. Thereafter, 500 µL of each obtained sample was spread on a blood agar plate. The culture plates were then incubated at 30°C, and the colonies with the highest hemolytic halos were regarded as potential isolates for biosurfactant production. In the next step, the desired isolates were further purified by sub-culturing on nutrient agar medium to obtain axenic culture. The achieved pure isolates were preserved using glycerol 20% (v/v) at −80°C (12).

3.2. Evaluation of the Selected Isolate for Biosurfactant Production

3.2. 1. Hemolytic Activity as a Preliminary Screening

The blood agar plates containing 5% v/v blood were used to seed the desired isolate, which was incubated at 37°C for 48 hours. Then, the plates were examined to form the clear zone around bacteria colonies, and the size of the clear zone was measured (13).

At first, the selected isolate was cultivated in nutrient broth (NB) medium and incubated at 37°C for 96 hours. Then, samples were taken intervallic and analyzed for OD600 by photospectroscopy (UV-1800, Shimadzu CO, USA) followed by centrifugation (5000 rpm for 10 minutes) and determination of EI%, Oil spreading test, surface tension, and pH alteration (5).

Mineral oil (5 mL was added to equal valium of supernatant and vortexing at high speed (300 rpm) for 2 minutes. The emulsion stability was determined after 24 hours. EI% was determined using the following equation (5):

A volume of 100 µL of the supernatant (as mentioned above) was dropped onto the surface of the mineral oil. The diameter of the clear zone on the oil surface was measured and compared with 100 µL of un-inoculated culture media as the negative control (14).

Tensiometer (KRUSS-K100, Germany) was applied to measure the surface tension of the culture supernatant. The values reported are the mean of three measurements (12).

3.4. Identification of the Isolated Bacterial Strain

The morphological characterization of the selected isolate was evaluated by macroscopic and microscopic evaluation. Also, using several biochemical tests, the strain of bacteria was further characterized (5, 15). For further identification of the isolate, analysis of the 16S rDNA gene was performed after extraction of genomic DNA by biomass heating. The obtained template DNA was then applied to prepare a PCR mix containing the primer pair of 27F (5'-AGAG TTTGATCCTGGCTCAG-3') and 1525R (5'-AAGGAGGTGATCCAGCC-3'). The Primus 96 advanced thermal cycler (PEQLAB, Erlangen, Germany) was employed for target gene amplification using the program of (a) 94°C for 3 minutes; (b) 30 cycles of denaturation at 94°C for 1 minute, 60°C for 45 seconds and 72°C for 90 seconds; and (c) the final extension at 72°C for 90 seconds. The desired samples containing the amplified 16S rDNA gene were sent to Takapouzist Co. (Tehran, Iran) for sequencing. After the determination of forward and reverse sequences, the complete sequence of the 16S rDNA gene was built using the software of GenRunner (version 3.01) and comprised other recorded genes in the GenBank of NCBI using BLAST software. The phylogenic tree of the selected isolate was drawn. The obtained sequences were then submitted to the GenBank of NCBI to get accession number (5).

3.5. Evaluating the Effect of Factors on Biosurfactant Production

For all six isolated bacterial colonies (obtained from 10 collected samples), the hemolytic activity of the biosurfactant-producing bacterial (designated as M2) was verified on the blood agar medium by the production of halo around the related colony (Figure 1). Hemolytic activity measurement is applied as a primary method to screen biosurfactant production (17). The same process was done by Abouseoud (18) for biosurfactant activity of Pseudomonas fluorescens. The diameter of the hemolytic zone was used as an indicator. 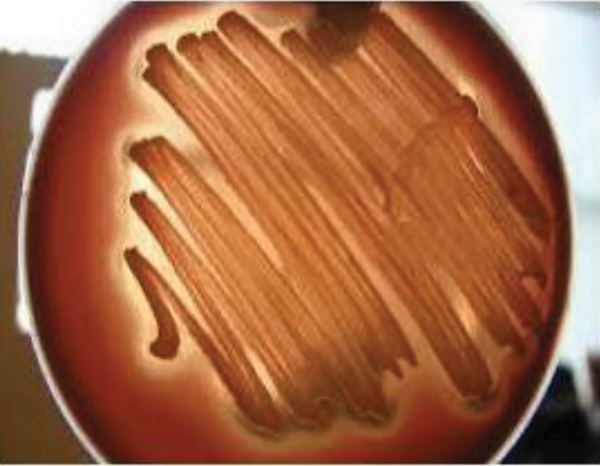 Cultivation of B. atrophaeus on Blood Agar Plates

After cultivating the bacterial isolate for 72 hours, the produced supernatant was harvested at different time intervals and tested for the E24 index. As shown in the profile of E24 determination (Figure 2) the maximum E24 index recorded after 12 hours of cultivation, where the E24 index reached 10%. Similar results are reported by Cooper et al. (19). 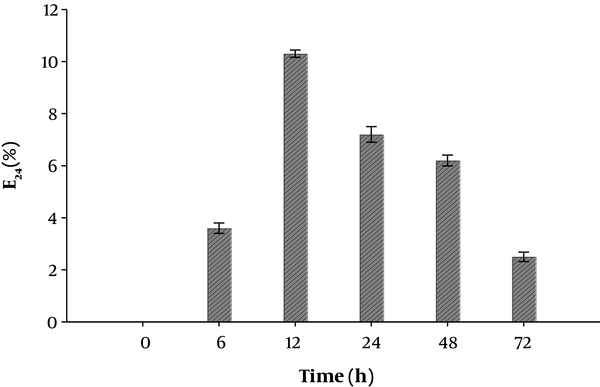 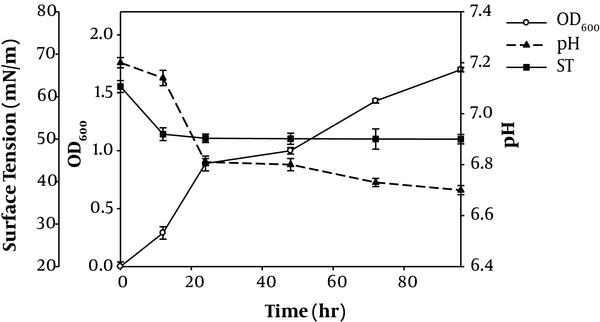 Time course profile of B. atrophaeus during 96 hours cultivation

4.5. Identification of the Selected Isolate M2

Morphological characteristics and biochemical tests of the isolate M2 were determined using standard protocols. It was a non-motile, Gram-positive, rod-shaped bacterium which formed a white to pale yellow colony on nutrient agar medium. The mentioned isolate represented positive reactions for catalase and oxidase and produced acid from maltose, sucrose, lactose, mannitol, glycerol, galactose, fructose, and glucose. This isolate hydrolyzed casein but couldn't hydrolyze gelatin and starch. Isolate M2 grew well at all concentrations of salt, which were tested (2.5 - 15% NaCl) and temperatures up to 40°C. However, the growth decreased at 50°C. The BLAST results of the 16S rDNA amplified gene revealed that isolate M2 was closely related to Bacillus atrophaeus with a similarity of 99%. The phylogenic tree of the obtained results is illustrated in Figure 4. The gene sequence was deposited in GenBank under the accession number of KF682367. 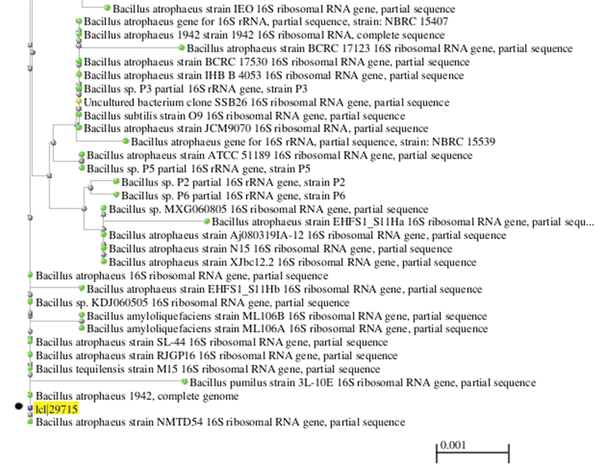 4.6. Effect of Factors on Biosurfactant Production 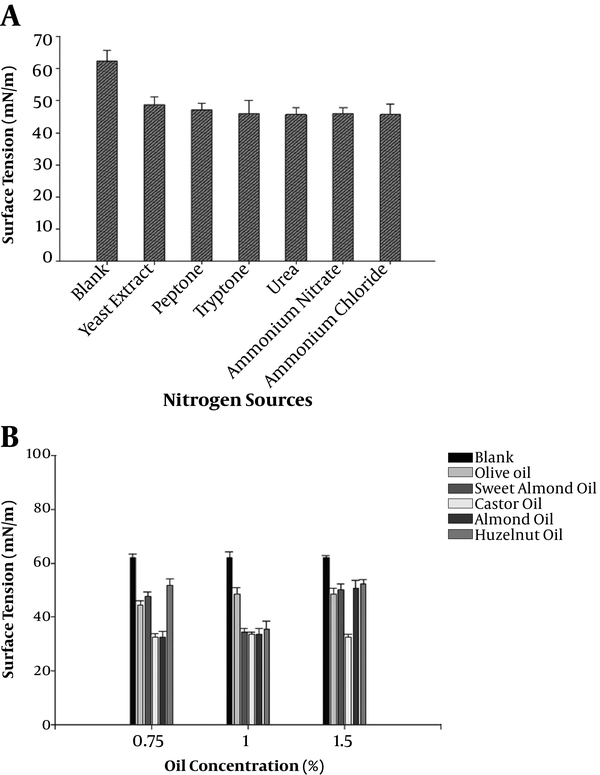 Effect of nitrogen and carbon sources on the surface tension of the culture broth of B. atrophaeus strain

The bacterial strain, B. atrophaeus, was successfully isolated from different locations of saline and hypersaline environments in Iran. B. atrophaeus could produce biosurfactants. Based on the results, nitrogen, carbon (castor oil, almond oil), and cation sources (Na+, Mg2+) are the main factors contributing to biosurfactant production by B. atrophaeus. Such biosurfactant producers would have great potentials in bioremediation activities and microbial enhanced oil recovery.

The authors would like to thank Kerman University of Medical Sciences (KMU) for facilitating research into the conclusions of this study.