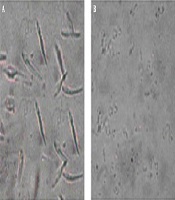 The first drug for the treatment of leishmaniasis is pentavalent antimony compounds which have great side effects.

Leishmania major promastigotes were treated with HESA-A in different increasing concentrations ranged 1.625 - 120 µg/mL, and amphotericin B and the phenomenon of apoptosis in the parasite were evaluated by 3-(4,5-dimethylthiazol-2-yl)-2,5-diphenyltetrazolium bromide (MTT), flow cytometry, and DNA fragmentation tests.

HESA-A, with significant induction of apoptosis in Leishmania major promastigotes, can be plausible in the treatment of cutaneous Leishmaniasis.

Apoptosis or programmed cell death (PCD) is a normal and physiological process of cell suicide regulated by several elements. This process has been studied in various cells, such as nematodes, insects, amphibians, and mammals (1-4). This phenomenon involves morphological alterations, such as cell shrinkage, membrane blebbing, cell surface changes, and biochemical changes, including phosphatidylserine (PS) externalization in the plasma membrane and oxidative stress and release of protein from mitochondria (5-7). Apoptosis also results in the condensation of chromatin and fragmentation of chromosomal DNA and nuclear compartments (5). Once, it was believed that PCD emerged with multi-cellularity but did not occur in single-celled microorganisms (2). Recently, several investigations have indicated that apoptosis could also happen in different unicellular eukaryotes (8-15), including various species of Leishmania (16-20), especially Leishmania major (21). The mechanisms of apoptosis induction in Leishmania can be considered as potential targets to produce new anti-leishmaniasis drugs. Leishmaniasis- a complex of protozoan parasitic diseases- has afflicted 12 million people and threatened more than 350 million people worldwide. It has been one of the most important causes of mortality and morbidity amongst different populations. Today, the first drug for the treatment of leishmaniasis is pentavalent antimony compounds in all their forms, including meglumine antimoniate (Glucantime) and sodium stibogluconate (Pentostame) (22, 23). These drugs, with an effect on parasitic enzymes, especially interruptions in the phosphokinase enzyme activity, prevent adenosine triphosphate (ATP) production (24). The adverse side effects of these medications and a concerning increase of unresponsiveness to pentavalent antimonial drugs, with more than 50% of individuals infected by different types of Leishmania spp. in some areas (25), have led scientists to search for effective medications with minor side effects. HESA-A is a naturally occurring, herbal-marine biological compound invented in Iran. Its mass production has been provided by the Ministry of Health and Medical Education (D5-6638, registration date 2005) (26). This drug is a mixture of Penaeus (Melicertus), latisulcatus (Penaeidae), Carum carvi L. (Apiaceae), and Apium graveolens L. (Apiaceae) (27). Several investigations have indicated the antitumor activity of certain components in HESA-A (28); these components have also been proven to accelerate the healing process. Numerous in vitro and in vivo studies have been carried out to assess the antitumor properties of HESA-A. These studies have yielded favorable results so far (29, 30). Besides, apoptosis induction of Leishmania major promastigotes in some marine organisms, such as marine Holothuria leucospilota, has been previously proven (31).

HESA-A is a natural compound, originated from an herbal marine compound. In this study, it was provided by Osveh Drug Co. Iran. Twenty grams of the active HESA-A were dissolved in 200 mL of 1 N HCl to prepare the working solution. The solution was shaken for approximately 24 h. Then, the pH of the solvent was raised to 7.6 by adding NaOH. Finally, the solution was filtered (pore size, 0.45 µm) and stored at 4°C (32).

For mass proliferation, Leishmania major promastigotes were cultured in an RPMI 1640 medium enriched with 10% FBS, antibiotics (100 µg/mL streptomycin and 100 IU/mL penicillin), and L-glutamine (2 mM). Flask cultures were checked every day to detect bacterial and fungal contamination. Flasks were incubated at 24 ± 1°C. Finally, when the promastigotes reached a stationary phase, they were used to encounter HESA-A. The trial was repeated three times (33, 34).

The anti-Leishmanial activity of HESA-A on Leishmania major (MRHO/HR/75/ER) promastigotes was quantitatively measured by colorimetric assay using MTT. For MTT reagent preparation, five mg of MTT powder was dissolved in one ml of sterile PBS solution (five mg/mL). A volume of 100 µL of HESA-A at different increasing concentrations ranged between 1.625 - 120 µg/mL, and amphotericin B (40 µg/mL) was added to 2 × 106 cells/mL of promastigotes in a 96-well flat-bottom plate at a final volume of 100 µL. Plates were incubated at 24°C for 72 h. 100 µL of promastigotes (without drug), at a seeding density of 2 × 106 cells/mL, was used as a negative control. All trials were performed in triplicates at three-time points of 24, 48, and 72 h. Subsequently, 20 µL of MTT (5 mg/mL in distilled water) was added to each well, and plates were incubated for 4 h at 24°. Further, to define the cell viability, supernatants were carefully harvested and discarded. Then, 100 µL of DMSO was added to each well to dissolve the colored formazan crystals. In the end, cell viability was estimated by checking the optical density at 540 nm using an ELISA reader device. Growth inhibition percentage was assessed using the below formula:

After 72 h incubation of promastigotes with HESA-A, the organisms’ possible changes were investigated under an optical microscope with a magnification level: 100×. In brief, the examination included centrifuging promastigotes at a low speed (1000 g for 3 minutes), suspending in PBS, and observing the morphological changes, including cell shrinkage and motility in experimental and control samples at different times and at least 20 microscopic fields for each sample. Eventually, the treated group was compared with the untreated group in terms of morphological changes and motility.

Binding of annexin V-FITC/PI in treated/untreated promastigotes was detected using FITC annexin V Apoptosis Detection kit II (BD PharmingenTM, New Jersey, USA). The whole process was done according to the manufacturer’s instructions with minimum modifications. Briefly, 200 µL of promastigotes (1 × 107/mL), previously incubated with different concentrations of HESA-A for 24, 48, and 72 h, were initially collected. Cells were also washed twice using cold PBS, suspended in a 400 µL binding buffer again, and then were transferred to a 5 mL tube. Later, 5 µL of FITC annexin V and 5 µL of propidium iodide (PI) were added, and the cells were incubated for 20 min at room temperature and in the dark. The cells obtained at 24, 48, and 72 h were finally analyzed on a flow cytometer (Becton Dickinson, USA), using CellQuest software.

For the qualitative measure of fragmentation of DNA as a function of apoptotic cell death, agarose gel electrophoresis was employed, as described before (21). Briefly, Leishmania major promastigotes (1 × 107/mL) were, firstly, collected at different growth time points. Then, to extract DNA from induced-apoptosis and non-induced promastigotes, an apoptotic DNA ladder kit was utilized following the manufacturer’s protocol. Later, 10 µg from each DNA aliquot was separated on a 1.5% agarose gel containing ethidium bromide (0.5 µg/mL) by electrophoresing for two h at 80 V. Then, DNA bands were observed and photographed by using Gel Doc device (Uvidoc, Gel Documentation System, Cambridge, UK).

All data were analyzed for significance using SPSS software (version 19). P-values less than 0.05 were assumed as statistically significant.

4.1. In Vitro Cytotoxic Effect of HESA-A on Leishmania major Promastigotes by MTT Assay

The inhibitory effect of HESA-A on Leishmania major promastigotes was investigated. The IC50 value of the compound at three-time points of 24, 48, and 72 h was estimated at 40.35 µg/mL, 13.82 µg/mL, and 2.81 µg/mL, respectively. In addition, HESA-A revealed a dose- and time-dependent activity against parasites in vitro exhibited in Figure 1. In the positive control group, cells were exposed to amphotericin B at several concentrations, and the IC50 value at three-time points of 24, 48, and 72 h was obtained 120 µg/mL, 63 µg/mL, and 40 µg/mL by MTT assay.

Inhibitory effect of the HESA-A on Leishmania major promastigotes at three-time points of 24, 48, and 72 h.

Investigation of treated (2.81 µg/mL in 72 h) promastigotes, under an optical microscope with magnification level, was as follows: 100× showed intact rounding shapes along with condensed cytoplasm shrinkage of cells and immobility. In addition, the number of cells significantly decreased after treatment. In non-exposed promastigotes, there was neither a change in shape nor a decrease in number (Figure 2).

Flow cytometry analysis: Apoptosis occurrence in control (A) and treated (B) Leishmania major promastigotes after 72 h treatment with HESA-A (2.81 µg/mL).

To differentiate between the necrotic and apoptotic exhibition of cell death in Leishmania major promastigotes, double stains annexin V-FITC and PI were simultaneously used in the flow cytometry method. Annexin V is a protein that adheres to PS in apoptotic cells, translocating from inner to outer layers. Unlike annexin V, PI, which does not penetrate live cells, selectively enters permeable necrotic cells and binds to DNA (36). 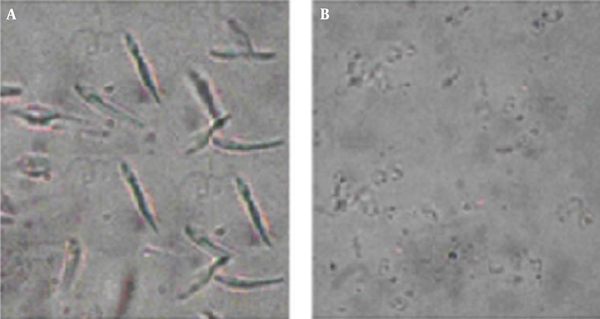 The laddering pattern of Leishmania major promastigotes, treated with 2.81 µg/mL of HESA-A for 72 h, was observed in 1.5% agarose gel electrophoresis (as depicted in Figure 4). 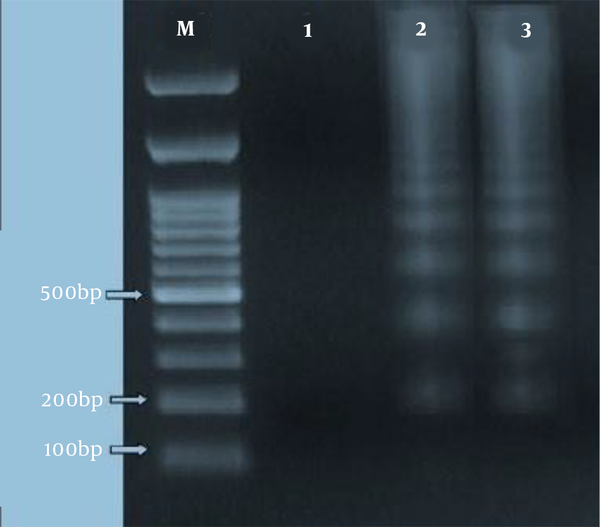 Several efforts have been made so far for introducing new anti-Leishmania agents since there have been increasing drug-resistant Leishmania cases. In addition, the side effects of conventional antimonial drugs have remained a concerning issue. Leishmaniasis is a tropical disease treated with non-leishmaniasis medication. Recent research on the treatment of leishmaniasis showed that researchers’ focus was more on anti-leishmaniasis medicine in combination with non-leishmaniasis drugs, which can also overcome drug resistance issues. Previous studies reported significant antitumor effects of HESA-A, a new Iranian immunomodulating medication (30, 37). This compound has recently attracted many researchers’ attention to investigate the potential antimicrobial possibility of its organic and synthetic elements. Here, we decided to evaluate the induction of apoptosis of HESA-A in Leishmania major promastigotes in vitro since several reports on the effects of various elemental components of HESA-A in inducing oxidative stress and cell apoptosis in cancer cells (38). Apoptosis is a strategy for the treatment of cancer cells; anti-cancer drugs are often produced purposefully (39-42). Numerous antitumor medications could eradicate tumor cells by triggering the apoptotic process. This signifies the importance of exploiting the apoptotic mechanism. In this study, HESA-A, as an anti-cancer drug, like other anti-cancer medications, induced apoptosis in the Leishmania major promastigotes. Our previous study showed that miltefosine induced apoptosis in Leishmania major and Leishmania ropica promastigotes (21).

Doroodgar et al. (43) reported that tamoxifen-induced apoptosis of Leishmania major in a dose- and time-dependent way. Investigations on the pathways through which apoptosis could be triggered in cell lines have indicated that tamoxifen induces apoptosis by increasing the activation of caspase-3 in a dose- and time-dependent manner. Flow cytometry analysis also showed that tamoxifen with 50 µg/L concentration after 48 h increased apoptosis from 2% to 59.7% in Leishmania promastigotes (43). Our previous study on the possibility of apoptosis-inducing potential of sea cucumbers (Holothuria leucospilota), a marine invertebrate animal, in Leishmania major promastigotes showed various manifestations of apoptosis after treatment, including cell shrinkage, the formation of apoptotic bodies, blebbing of the cell membrane, and the externalization of PS (not of laddering pattern) (31).

This article results from a research project (code RDC-9504), funded by the University’s Vice Chancellor for Research and Technology development of Ahvaz Jundishapur University of Medical Sciences. The authors of the manuscript would like to thank the esteemed staff of the university’s comprehensive laboratory and the Department of Parasitology, Faculty of Medicine, for their valuable assistance.