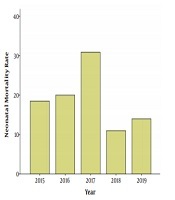 The present study aimed to determine the pattern and causes of neonatal mortality in the Federal Medical Center in Owo, Ondo State, Southwest Nigeria.

This retrospective study was conducted using the hospital records of the neonates admitted over a five-year period from 1st of January 2015 to 31st of December 2019.

According to the results, preventable diseases such as birth asphyxia, prematurity, and sepsis remain the major causes of neonatal mortality, of which neonatal deaths occur mostly within 24 hours of admission.

Knowledge of the pattern of admissions and deaths in hospitalized neonates reflects the major causes, as well as the available standard of care for neonates in a particular region. In order to reduce neonatal mortality as stated in the Sustainable Development Goal 3, it is imperative to identify the common causes of neonatal mortality so as to proffer solutions. Furthermore, the knowledge of the causative disease and mortality patterns from the periodic audit of neonatal admissions and deaths could help determine the effects of the current practices to mitigate neonatal mortality, as well as the challenges against neonatal survival in the environment, so that appropriate and effective preventive measures could be taken.

In the southwest of Nigeria, data are scarce regarding the common causes of neonatal mortality.

The present study aimed to investigate the pattern of neonatal admissions and causes of neonatal mortality in a tertiary health center in the southwest of Nigeria. The research findings could largely contribute to the planning of effective interventions for reducing the morbidity and mortality of newborns.

This descriptive-retrospective study was conducted over a five-year period from the 1st of January 2015 to 31st of December 2019.

The study was carried out in the neonatal unit of the Pediatric Department of the Federal Medical Center (FMC) Owo, located in Ondo State, Nigeria. The FMC in Owo is a tertiary hospital owned by the Federal Government and is strategically located to receive referrals from the catchment areas, including Ondo, Ekiti, Osun, Kogi, and Edo states, Nigeria. The hospital has an obstetrics unit that admits high-risk deliveries from other healthcare institutions in the catchment areas. The neonatal unit is a 20-bedded ward, which is divided into the Inborn and Outborn units. The inborn unit has 10 beds and receives admission from the labor ward, labor ward theatre, and postnatal ward. The Outborn Unit has 10 beds and admits neonates from home, primary and secondary healthcare centers, and other referral centers. The neonatal unit is supervised by two consultants, two senior registrars, four registrars, four interns, and 15 nurses that run the shifts.

Clinical diagnosis was based on medical history, physical examination, and laboratory results. Gestational age was assessed based on the last menstrual period, and the new Ballard score chart was used in the case of the women who were unsure of their date (10). The neonates delivered alive before the gestational age of 37 completed weeks were considered preterm. Birth weight was classified in accordance with the World Health Organization (WHO) weight classification (11). Blood culture and cerebrospinal fluid analysis was performed to isolate pathogenic organisms for the diagnosis of neonatal sepsis and meningitis, respectively. The neonates who died within 0 - 7 completed days of life were defined as early neonatal death, while those who died within 7 - 28 days of life were defined as late neonatal death (12).

Data on neonatal jaundice were available in the clinical assessment records and had been confirmed by laboratory investigation. Congenital anomalies were based on clinical grounds with some evaluations where feasible. Perinatal asphyxia was diagnosed in the neonates with the one- and five-minute Apgar scores of < 7, those who were unresponsive to stimuli, and the neonates with unexplained convulsion by other causes (13). As for the neonates who had been born outside health facilities with unknown Apgar scores, details were obtained from the mother on factors such as crying immediately after birth, floppiness, loss of consciousness, presence of convulsion, and loss of neonatal reflexes. Other assessments were based on physicians’ judgment as noted in the patient case files.

Data on the admission registers, discharge registers, death register, delivery register, and case files of the neonates were obtained from the medical records department of the hospital.

The available records of the neonates aged 0 - 28 days, who were admitted under the care of the Department of Pediatrics over the study period, were assessed to extract the relevant data. Data obtained from the records included age, gender, length of hospital stay, weight at admission, final diagnosis, and age at death. The length of hospital stay before death was calculated from the date of admission to the date of death. The final diagnoses were based on the clinical features and laboratory test reviewed by at least a senior registrar or a consultant pediatrician. The total number of the live births was obtained from the Department of Obstetrics and Gynecology, and neonatal deaths were discussed at the mortality and morbidity meeting carried out weekly by the Department of Pediatrics.

The study protocol was approved by the Health Research Ethics Committee of the FMC Owo in the Ondo state, Nigeria (registration number: FMC/OW/380/VOL.XCI/200).

Data analysis was performed in SPSS version 22.0 using frequency, means, standard deviations, and cross tabulations. The means and proportions were compared using student’s t-test, and the rate was expressed per 1,000. The P-value of less than 0.05 was considered significant.

Table 1 shows the causes of death during the study period. Birth asphyxia accounted for almost half of the mortalities, while one case (0.5%) died of neonatal tetanus. Surgical cases were five neonates (2.4%), including two cases of Hirschsprung’s disease, one case of jejunal atresia, one case of gastroschisis, and one case of encephalocoele. In addition, Lassa fever accounted for two deaths (1.0%). 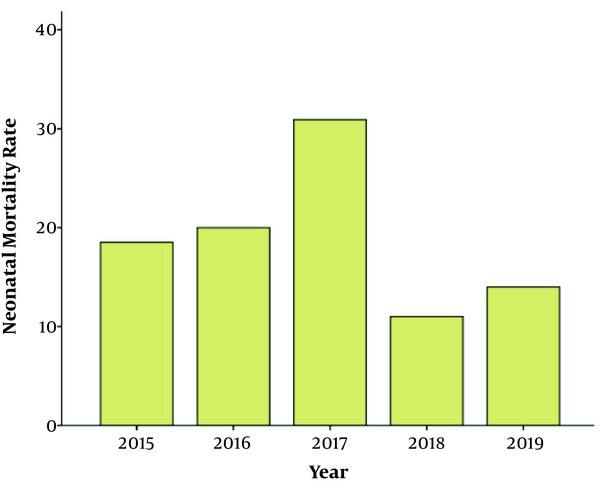 The neonatal mortality rate per year

The present study aimed to determine the pattern and causes of neonatal mortality in a tertiary hospital in the Southwest of Nigeria. According to the findings, more deaths were recorded among males compared to females, which is consistent with the similar studies conducted in Nigeria (14 - 17) and Pakistan (18). This might be due to the fact that male neonates are generally more susceptible to infections than females as studies have revealed that the diseases linked to the X chromosome are less common in female infants than males, which is indicative of the genetic influence on neonatal infection (19). It may also be associated with the priority placed on the male child in this part of the world, which in turn prompts health-seeking behaviors.

In the present study, more than 50% of the neonatal deaths occurred within the first 24 hours of admission, which is consistent with the previous studies in this regard (20, 21). This finding also supports the fact that in most of the patients with a late referral to the hospital in a critical state of health, delays at various levels of health-seeking should be addressed, such as delayed decision to seek care and delay in reaching the healthcare facility.

According to the findings of the current research, the leading causes of neonatal mortality were birth asphyxia, prematurity, and sepsis. This is consistent with the studies conducted in Umuahia (22) and other regions of Nigeria (23-26). Birth asphyxia was the most common cause of death (46.6%) in the present study, which is in line with the findings reported in Lagos (14), Kano (15), and Benin (27). This could be attributed to the poor antenatal care (ANC), delivery attendance by unskilled personnel, and poor referral system, which should be improved by educating the populace, encouraging proper ANC visitations, training of healthcare providers on effective obstetric care and neonatal resuscitation, availability of facilities for neonatal resuscitation at delivery centers, and appropriate referral systems to avoid delays at various levels. On the other hand, our findings in this regard are inconsistent with the results obtained in Jos (20) and Pakistan (28), where prematurity has been reported to be the most common cause of neonatal mortality. The mortality rate in the current research was higher among the outborn neonates compared to the inborn neonates, which is consistent with the previous studies (22-24).

According to our findings, Lassa fever accounted for two neonatal deaths, and this number could be higher due to the fact that the study center is in a Lassa fever endemic zone and the features of Lassa fever could easily be misdiagnosed as neonatal sepsis. However, data are scarce regarding Lassa fever as a cause of neonatal mortality. Notably, the FMC of Owo is a leading Lassa fever treatment center in Nigeria.

In the present study, neonatal tetanus accounted for one death, and the observed rate was lower than the reported rates in the studies performed in Umuahia (22) and Benin (29). The discrepancy might be due to the government-driven efforts to raise awareness and increase the immunization of pregnant women in order to reduce the incidence of neonatal tetanus.

The overall mortality over the study period in the current research was 10.1%, which was lower than the findings in Delta (20.3%) (30), Calabar (19.3%) (31), and Umuahia (16.0%) (22). The difference in this regard could be due to the fact that the present study was carried out in a tertiary center, and most neonatal deaths occur at home and primary or secondary healthcare facilities. Another reason for the discrepancy could be the increased knowledge of patient care and availability of medical facilities over time.

According to the results, birth asphyxia was the major cause of neonatal mortality, with most deaths occurring within 24 hours of admission. The overall neonatal mortality rate per 1,000 live births over the five-year study period was 19 per 1,000 live births. Therefore, the training of healthcare providers is recommended on obstetric care and resuscitation, while the availability of adequate facilities should also be prompted at every level, in order to minimize the rate of neonatal deaths.

Since this was a retrospective study, some of the data obtained from the registers and case files might not have been accurate; for instance, the initial diagnosis of some patients might have differed from the final diagnosis without being reflected in the records. In addition, the records might not have been properly documented due to clerical errors, especially when electronic medical recording is yet to commence in this center.

1) Pattern of perinatal mortality could be further studied as it is a better reflection of health care in neonates.

2) A longitudinal prospective study of neonatal mortality is suggested.

Hereby, we extend our gratitude to the research assistants and data entry clerks of the Department of Pediatrics at the Federal Medical Center of Owo, Nigeria for assisting us in this research project.

Copyright © 2020, Journal of Kermanshah University of Medical Sciences. This is an open-access article distributed under the terms of the Creative Commons Attribution-NonCommercial 4.0 International License (http://creativecommons.org/licenses/by-nc/4.0/) which permits copy and redistribute the material just in noncommercial usages, provided the original work is properly cited.
download pdf 235.92 KB Peer Review Comments ( 87.39 KB) Get Permission (article level) Import into EndNote Import into BibTex
Number of Comments: 0