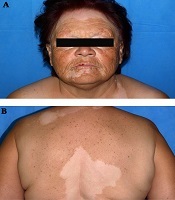 Multiple autoimmune syndrome (MAS) is a rare syndrome in which the patient is diagnosed with three or more autoimmune diseases. Autoimmune skin disorders, such as vitiligo, alopecia areata, lupus erythematosus, Sjögren's syndrome, or dermatitis herpetiformis, often take part in MAS. The etiology of the syndrome is still unknown, but immunological, hormonal, genetic, and environmental factors possibly play a role.

A 63-year-old woman was admitted to our department with a rare combination of several autoimmune diseases, including vitiligo, autoimmune thyroiditis, and recently diagnosed diabetes mellitus. Although the immediate cause of her hospitalization was erysipelas of the left leg, type 3 MAS was suspected, based on the simultaneous presence of three autoimmune diseases. Type 3 MAS groups together conditions such as autoimmune thyroid disease, myasthenia gravis, thymoma, Sjögren's syndrome, pernicious anemia, idiopathic thrombocytopenic purpura, Addison’s disease, type 1 diabetes mellitus, vitiligo, autoimmune hemolytic anemia, systemic lupus erythematosus, and dermatitis herpetiformis. The only criterion that needed to be fulfilled in our case, to establish the diagnosis of type 3 MAS, was a specific subtype of diabetes, namely, late-onset autoimmune diabetes (LADA).

We presented a patient with possible type 3 MAS. Further investigations are needed for the diagnosis of LADA by a more precise serological examination of anti-IA and anti-GAD 65 antibodies.

Multiple autoimmune syndrome (MAS) was described by Humbert and Dupond (1) in 1988 as a rare syndrome in which the patient is diagnosed with three or more autoimmune diseases. Autoimmune skin disorders such as vitiligo, alopecia areata, lupus erythematosus, Sjögren's syndrome, or dermatitis herpetiformis often take part in MAS. The etiology of the syndrome is unknown; however, the possible etiological factors include genetic predisposition and immunological, hormonal, and other environmental triggers.

We report a 63-year-old woman who presented at our department with a history of several autoimmune diseases. Ten years ago, the patient developed vitiligo and autoimmune thyroiditis, diagnosed by endocrinologists as Hashimoto thyroiditis. Recently, she was also diagnosed with diabetes mellitus. Regarding the family history, her mother died of hepatic carcinoma; however, her parents did not have any known autoimmune diseases. The immediate complaint, imposing her hospitalization, was erythema and swelling of the left leg for three days. The patient also had a fever of 39°C on admission. Routine workup showed hypopigmented macules on the face (Figure 1A), trunk (Figure 1B), and extremities, as well as well-demarcated erythema and edema on the left lower leg accompanied by increased local temperature (Figure 2). A, Hypopigmented macules on the face of a 63-year-old woman with MAS; B, the same lesions on her back Erythema and swelling of the left leg of the patient

The laboratory examination showed leukocytosis, elevated ESR and C-reactive protein, and no signs of anemia. Doppler sonography was performed, which revealed an unimpaired deep vein blood flow. Therefore, deep vein thrombosis was excluded. The study of thyroid function showed normal TSH and T4 levels on treatment with thyroxine 50 µg daily. Positive anti-TPO antibodies were detected, which was compatible with previously diagnosed Hashimoto thyroiditis. The patient was diagnosed with erysipelas and underwent treatment with ceftriaxone 2 g per day for seven days. It resulted in the complete subsidence of erythema and edema on her left leg.

Initially, the syndrome was called autoimmune polyendocrine syndrome. Based on clinical criteria, Neufeld and Blizzard in 1980 distinguished four main subtypes (2). Later on, the term autoimmune polyendocrine syndrome was replaced by the more accurate “multiple autoimmune syndrome” because the majority of disease cases were due to non‐endocrine reasons (1, 3). Type 3 MAS groups autoimmune thyroid disease, myasthenia gravis, thrombocytopenic purpura, and type 1 diabetes mellitus together with autoimmune skin disorders like Sjögren's syndrome, vitiligo, systemic lupus erythematosus, and dermatitis herpetiformis (1, 4). In a retrospective analysis of 11 patients with type 3 MAS, Klisnick et al. (5) found that 63.6% of the patients had segmental or bilateral vitiligo, and 90% presented with autoimmune thyroid disease. The authors concluded that the female sex and acrofacial topography of vitiligo, similar to those in our patient, could be used to predict associated autoimmune disorders in patients with vitiligo (5). Vitiligo is a chronic autoimmune disease of the skin, characterized by acquired cutaneous depigmentation. The cause of this autoimmune reaction is thought to be T cell-mediated killing of melanocytes (6), which takes place via the IFN-γ-STAT1-CXCL10 signaling inflammatory pathway (7).

The pathogenesis of MAS remains unclear, although genetic susceptibility to environmental triggers is suspected (8). Various autoimmunity genes such as HLA-DRB1, TNF, and PTPN22 are proposed to be associated with autoimmunity, serving an example of the effect of a single genotype on diverse phenotypes (9, 10). Both humoral and cell-mediated immunity can play a role in MAS, presuming that if the immune system already follows the autoimmune pattern, there is a much higher possibility for another target.

The simultaneous presence of vitiligo, autoimmune thyroiditis, and diabetes mellitus in our patient suggested probable MAS. The only criterion that needed to be fulfilled to establish the diagnosis was a specific subtype of diabetes, namely late-onset autoimmune diabetes (LADA). Type 1 diabetes is classically defined as an autoimmune disease due to the destruction of pancreatic β cells in children and young adults (11). According to some population-based analyses, however, at least 42% of type 1 diabetes cases occur after the age of 30 (12). Distinguishing between type 1 and type 2 diabetes in middle-aged patients is challenging. Тhe reason is that in this age group, the incidence of type 2 diabetes increases rapidly, making it difficult to diagnose type 1 diabetes (12). Unfortunately, we could not confirm the diagnosis of LADA in our patient, by examination of anti-IA and anti-GAD 65 antibodies, due to her poor compliance.

We presented a patient with probable type 3 MAS. Further investigations are needed for the diagnosis of LADA by a more precise serological examination of anti-IA and anti-GAD 65 antibodies.

Copyright © 2020, Journal of Skin and Stem Cell. This is an open-access article distributed under the terms of the Creative Commons Attribution-NonCommercial 4.0 International License (http://creativecommons.org/licenses/by-nc/4.0/) which permits copy and redistribute the material just in noncommercial usages, provided the original work is properly cited.
download pdf 3.66 MB Peer Review Comments ( 83.58 KB) Get Permission (article level) Import into EndNote Import into BibTex
Number of Comments: 0