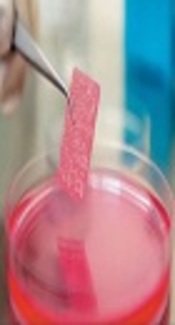 Bio - Conductive Scaffold Based on Agarose - Polyaniline for Tissue Engineering

Architecting novel scaffold for tissue engineering has attracted significant attention. Biomimic scaffolds can enhance cellular activity and tissue regeneration. Conductive scaffold exhibited ameliorated regeneration and tissue repair. In this research, conductive hydrogel based on agarose/polyaniline was synthesized to evaluate hydrogel performance as a novel candidate for tissue engineering. Agarose/polyaniline was synthesized using in - situ oxidative polymerization to achieve conductive hydrogel. Fourier Transform Infrared Spectroscopy (FTIR) was utilized for characterization of the hydrogel. Cyclic voltammetry and conductivity measurement were applied for determining the electro - activity and hydrogel conductivity. Hydrogel conductivity was around 10 to 4 S/cm and exhibited two redox peaks attributed to electroactive transitional state around 0.8 and 0.6. Polyaniline addition to hydrogel decreased the hydrogel swelling capacity because of the hydrophobic nature of polyaniline from 60% to 30%. Cell viability test revealed that the conductive substrate enhanced cellular proliferation. Agarose/polyaniline can be widely utilized in tissue engineering because of adjustable swelling behavior and conductivity, which can affect cellular activity and regeneration.

Outnumbered people have suffered from organ dysfunction. Tissue engineering has endeavored to compensate organs/tissues impairments using different strategies, such as architecting biomaterials, cell injection, and applying growth factors/drugs (1, 2). In this regard, advanced biomaterials have been designed to fulfill such aim. Polymers have been used for various applications from coating (3, 4) to biomedical applications and have exhibited promising features in tissue regeneration (5). Biocompatible polymers have been widely utilized for tissue repair as a scaffold, including natural and synthetic polymers. Natural polymers exhibit interesting properties because of extracellular matrix resemblance, such as gelatin (6). One of the important family members of natural polymers, polysaccharides, such as agarose and chitosan, has attracted significant attention in regenerative medicine due to its non-immunological properties and ECM similarity (7). Appropriate regeneration can be achieved by improved cellular activity, which can be achieved by designing the bio - mimic scaffold, such as adding conductive materials (8). Substrate conductivity as a mimicking factor can enhance cellular activity and ameliorate regeneration (9). Electrical signal transmission can be enhanced using the conductive scaffold. One of the attracting conductive materials is conductive polymers, such as Polyaniline (PANI), polypyrrole and polythiophene. Polyaniline, because of a convenient synthesis route and affordable costs, has been abundantly used in biomedical applications (10). Chen et al. synthesized PANI nanoparticles embedded in PLA nanofibers to enhance bone regeneration. Such scaffold provided the bio - mimic niche, which exhibited biocompatibility and enhanced estrogenic differentiation (11). Moreover, PLA/PANI conductive nanofibers were utilized for cardiac regeneration, and such scaffold resulted in enhancement of cell - cell interaction, maturation, and spontaneous beating of primary cardiomyocytes (12). It was reported that PANI could regulate myogenic differentiation for muscle regeneration. Polyaniline added to silk fibroin to endow electroactivity to the scaffold, which was sensitive to electrical signals. Furthermore, L929 fibroblast and C2C12 myoblast cells were seeded on the scaffold, which exhibited proper biocompatibility and suitable milieu for cellular activity (13). In addition, conductive scaffold based on poly (glycerol sebacate) - aniline pentamer with appropriate hydrophilicity ameliorated the formation of myotubes by differentiating the C2C12 myoblast cells, which can enhance skeletal muscle regeneration (14). Skin is known as a barrier of the body against exogenous invasions, hence its damages should be regenerated appropriately and rapidly to protect the body against infections (15). Wound dressing has been widely utilized for wound healing. Conventional wound dressings have acted as a protection and cannot improve the healing process. Nowadays, advanced wound dressing has been introduced, which can improve and accelerate the wound healing process (16). Various types of wound dressings, like nanofibers, hydrogels, and foams are available commercially for different types of wounds. However, accelerated wound dressing necessitates the presence of stimulators, such as growth factors, yet their shelf life has limited their usages. Conductive substrate can boost cellular activity and accelerate the wound healing process (5). Zhao et al. synthesized conductive wound dressing based on chitosan/PANI. The wound dressing can be applied using injection, which can cover the whole surface of the wound; moreover, an injectable gel was self-healing maintaining the gel integrity (17). It was reported that such dressing exhibited antibacterial and hemostatic properties with proper adhesiveness for cutaneous wound healing (17). Polyaniline endowed anti - oxidant and electroactivity to the dressing causing appropriate wound repair (18). A conductive hydrogel can provide the 3D microenvironment for enhanced tissue regeneration. Cellular activity can be stimulated by conductive substrate, resulting in tissue repair. The conductive hydrogel can control drug release with electrical stimulation; moreover, electrical stimulation ameliorates cell proliferation and differentiation (19). In this study, the conductive hydrogel based on agarose/polyaniline was synthesized. The hydrogel was characterized by FTIR. The conductivity of hydrogel was evaluated by four probe methods and electro - activity was studied by cyclic voltammetry; moreover, it has been revealed that the hydrogel was biocompatible. Results indicated that such hydrogel can be potentially used for tissue engineering, especially as a wound dressing.

Agarose, aniline, and ammonium persulfate was purchased from the Merck Company (Germany). Agarose/PANI synthesis route: Aniline was dissolved in acidic solution (1 M HCl) and agarose was dissolved in water. Aniline solution was added to agarose solution and stirred to gain the homogeneous solution. Next, Ammonium Persulfate (APS) solution was added in a drop - wise manner to the mixture to yield the agarose/PANI hydrogel.

Fourier Transform Infrared Spectroscopy (FTIR) was used to characterize the samples. The four probe method and cyclic voltammetry were utilized to determine samples’ conductivity and electroactivity, respectively. The σ = 1/R d/S equation was used for conductivity measurement, where, σ, R, d, and S are the conductivity, resistance, thickness, and area of samples, respectively. Swelling behavior can regulate tissue humidity, especially in wound dressing application; hence, the swelling ratio of samples was evaluated to determine the swelling behavior. The SR = (Ws - Wd)/Wd × 100 equation was utilized for calculating the Swelling Ratio (SR), where Ws and Wd were swollen weight of sample and dry weight of sample. Samples’ cell viability was evaluated using rat bone marrow mesenchymal stem cells. After sterilizing the samples with ethanol and UV, they were washed by Phosphate Buffered Saline (PBS) and incubated with Dulbecco’s Modified Eagle Medium (DMEM) for 24 hours. Rat bone marrow mesenchymal stem cells were poured on scaffolds and incubated, after one, three, and five days; 3- (4,5- dimethylthiazol- 2- yl)- 2,5- diphenyltetrazolium bromide (MTT) was poured on samples, and then dissolved in DMSO. The absorbance was then recorded. Figure 2 depicts cyclic voltammetry of agarose/PANI and demonstrates the electroactivity of the synthesized hydrogel.

Swelling behavior of hydrogel is shown in Figure 3. The ultimate swelling capacity was reduced from 60% to 40% with PANI addition.

Swelling Behavior of Agarose and Agarose/Polyaniline

Figure 4 illustrates the MTT results of samples. It was revealed that hydrogel with 2% PANI exhibited the best cell viability.

Cell Viability Assessment at Different Amounts of Polyaniline in Samples

Agarose is a polysaccharide with self - gelling properties because of abundant hydroxyl group presence in its structure, which causes the formation of a hydrogen bond and self - gelation (7). Dispersed aniline in agarose medium was in - situ polymerized using APS as an initiator, which resulted in a 3D conductive hydrogel. Aniline was distributed uniformly within agarose because of hydroxyl groups presence due to the interaction between aniline monomer and agarose molecules (20). Based on FTIR spectra, the peaks at 930, 1037, and 1640 cm-1 were attributed to agarose characteristic peaks, and bands at 1235, 1300 and 1491 cm-1 peaks were attributed to the PANI. Peaks at 300 to 3700 cm-1 indicated the formation of hydrogen bond between the N - H group of PANI and OH groups of agarose (8). Electro - activity of hydrogel was proved by cyclic voltammetry (CV) exhibiting two redox peaks at 0.79 and 0.53 V, which are attributed to the transition from leucoemeraldine to emeraldine state and emeraldine to pernigraniline state (21). Pristine agarose showed the maximum swelling capacity. Once PANI was introduced to the hydrogel reduced the swelling capacity because of the hydrophobic nature and repulsion forces, which prevented water diffusion and decreased the water uptake (22). Figure 4 reveals that the conductivity of hydrogel results in better cellular activity, such as proliferation. Conductive substrate facilitates the intracellular biosignal transition and ameliorates cell - cell interaction (23). However, increasing the PANI content resulted in toxicity and reduced cell viability; therefore, the optimum value of the conductive part should be determined in a conductive substrate. In light of the results, it was illuminated that agarose/PANi can be potentially used as an appropriate tissue regeneration scaffold - like wound dressing and neural guidance tube.

Conductive scaffolds have attracted significant attention because of their unique properties, such as ameliorated cellular activity. The requirement for the crosslinking agent has been omitted in agarose - based scaffold because of the self - gelling feature. Therefore, biocompatibility of scaffolds has been increased. Agarose/PANI hydrogel was synthesized through in - situ polymerization. Furthermore, PANI was distributed homogeneously in agarose medium because of agarose OH group interaction with NH group of aniline. Cyclic voltammetry revealed the electroactivity of the hydrogel in the presence of PANI with two peaks around 0.6 and 0.8. The conductivity was around 10 to 4 S/cm, which was useful for cellular activity. Swelling capacity of hydrogels was decreased with enhancement of the PANI because of the hydrophobic nature of PANI from 60 % to 30%. Agarose containing 2% PANI exhibited the best cell viability, which was attributed to improved cell - cell interaction. Finally, based on the result, it can be concluded that the agarose/PANI can be potentially utilized for tissue engineering applications.

Copyright © 2017, Journal of Skin and Stem Cell. This is an open-access article distributed under the terms of the Creative Commons Attribution-NonCommercial 4.0 International License (http://creativecommons.org/licenses/by-nc/4.0/) which permits copy and redistribute the material just in noncommercial usages, provided the original work is properly cited
download pdf 493.12 KB Get Permission (article level) Import into EndNote Import into BibTex
Number of Comments: 0