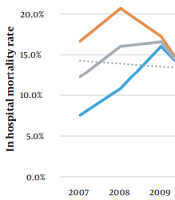 Acute Coronary Syndrome in Mashhad, Northeastern of Iran: Report of a Decade

Acute coronary syndrome (ACS) is a major cause of morbidity and mortality all over the world. Despite substantial efforts that have been made over the last decades, ACS management still remains challenging in most of the regions.

This study describes the characteristics and trends of outcomes for ACS patients in a decade in north-east of Iran.

Although the prevalence rate of AMI has slightly increased, the mortality rate has decreased. Close cooperation between general practitioners, health providers and cardiologists are of great importance in this field.

Despite the reducing trend of cardiovascular mortality in Europe and America in recent decades, it is still one of the main causes of mortality (1). Each year, around 635,000 Americans experience ACS and it is postulated that 40% of these patients die in five years (2). The situation is worse in eastern countries, for example, today, ACS is regarded as the main cause of death in the Asia-Pacific region accounting for around half of all global mortality (3). According to gulf registry of acute coronary events (gulf RACE) report from 65 centers in six Arab Middle Eastern countries (i.e. Oman, Kuwait, Yemen, the United Arab Emirates, Bahrain, and Qatar), 39% of all patients hospitalized with ACS (mainly MI) (4). According to a cohort study that was performed in Iran, the mortality rates based on national registry of myocardial infarction in hospitals among patients with STEMI and NSTEMI were 3698.4 and 4573.3 per 1000 person-year, respectively (5).

Despite substantial efforts that have been made over the last decade, ACS management still remains challenging in most countries. Until now, regardless of few published articles on ACS that only reported information obtained from one or more specialized hospitals in the urban areas, no comprehensive study for recognition and identification of the exact characteristics of patients with ACS has been performed in Iran. Importantly, in order to develop and implement new strategies and preventive interventions, clinical epidemiology and patterns of ACS and related factors should be determined (5).

This study describes the characteristics and trends of outcomes for ACS patients in a decade in Mashhad, north-east of Iran.

In this cross-sectional study, two hospital-based databases (i.e. Imam Reza and Qaem Hospitals, affiliated to Mashhad University of Medical Sciences, Mashhad, Iran) which are the two main tertiary academic hospitals of this city, were investigated. The information of all admitted patients to the cardiology department, emergency department of cardiology and critical care unit (CCU) of these two teaching referral hospitals during a 10-year period (from January 1, 2007, to December 31, 2016) was included. These two hospitals as the two main tertiary centers of north-eastern of Iran have nearly 2,000 beds, together.

Patients were identified according to their final diagnosis at discharge using the international classification of diseases 10th revision (ICD-10). Clinical diagnostic criteria of AMI were defined by a cardiologist according to clinical symptoms, electrocardiogram (ECG) changes and cardiac markers results.

All patients with ICD-10 codes of I20 (angina pectoris) or I21 (acute myocardial infarction) diagnosis were included in this study. Variables extracted from the hospital databases included: Patient demographics (age, gender, and marital status), length of stay (days), number of admissions (i.e. readmission), outcome (alive, death, and discharged against medical advice (DAMA)) and type of MI (STEMI, NSTEMI, and non-specific).

The data analysis was performed with statistical package for social sciences (SPSS) version 11.5. (SPSS Inc. SPSS for Windows, Version 11.5. Chicago, SPSS Inc.) The frequency, percentage, mean, standard deviation, median, and range were reported for description purposes. The comparison of quantitative and qualitative data was performed by independent sample t-test and chi-square tests, respectively. All tests were two-tailed and a significance level of below 0.05 was considered as statistically significant.

Table 1. Comparison of Some of the Main Clinical and Demographic Factors in Two Types of AMI a

A decline in the number of admissions due to STEMI was observed in 2012 but an upward trend for admissions due to NSTEMI/unspecific AMI was found from 2009. Overall, it seems that the prevalence rate of all MI categories had an increasing secular trend (Figure 1).

The prevalence rate among admitted patients due to STEMI and NSTEMI/unspecific AMI (2007 - 2016). The linear secular trend for total prevalence rate is shown by dotted line.

Table 2. Comparison of Age, Length of Stay and Admission Times Between Male and Female Patients a

The lowest value for AMI prevalence was found in 2009. The number of patients admitted due to STEMI, insignificantly reduced each year from 2012 to 2014 and 2015 to 2016. It is notable that AMI prevalence and mortality rates have decreased in developed countries (8-11) but increased in Middle Eastern countries (12, 13). Reduced AMI mortality rates in western countries may be due to the existence of a better lifestyle, improved evidence-based medicine and new treatment options like percutaneous coronary intervention (PCI) (10, 11, 14).

Our results showed that the mortality rate in women was higher than men which were consistent with data reported by previously performed studies in Asian and Middle Eastern countries (15-18). In our study population, women were significantly older than men and because of their condition, they had a higher mortality rate. Menopause, postpartum vascular dissection, and polycystic ovarian syndrome are some female-specific conditions. Some of these conditions, which occur at an early age, may increase the risk of coronary heart disease. Moreover, sex hormones are notable factors in the pathophysiology of vascular diseases (6). Reports from the United States based on data collected from 2010 to 2016, indicated that young women with ACS have a higher mortality rate compared to young men under similar hospitalized conditions (19). Study of the patients from six Middle Eastern countries showed that women had higher risk scores based on the global registry of acute coronary events than men (16). Also, another study which was based on data extracted from the 2nd gulf RACE-2 in 65 hospitals of six Arabian Gulf countries had similar results (20). In a 5 year study in Iranian population, it has been reported that the prevalence of ACS was higher in men (76.1%) compared to women (68.6%) (21).

In our study, women with both STEMI (14.3% vs. 7.7%) and NSTEMI (19.6% vs. 13.2%) had a higher mortality rate as compared to men, which was in line with the study that was performed in Heart Association class I medical treatments and the American College of Cardiology. Their findings showed that women with STEMIs (20% vs. 18.5%) and NSTEMIs (7% vs. 4%) had higher in-hospital mortality compared to men (22). Generally, in our study, the mortality rate in NSTEMIs patients was much higher than STEMI patients. This observation could be attributed to the age of our population as it consisted of older people who commonly have a higher risk of hypertension and multi-vessel disorders leading to increased mortality rate.

Generally, married people have lower levels of stress and depression because of social and security supports. Besides, atherosclerosis and other pathologic processes are lower in couples compared to singles. Investigations that were done in developed countries such as the United States, Sweden, Great Britain and the Netherlands, have shown that marriage can influence mortality in different cultures. In gulf RACE-2 study, STEMI/NSTEMI rates in married patients were considerably lower (50.7% and 26.6%, respectively) than the rates observed in the present study (91.9% and 89.4% respectively). But, in gulf RACE‐2 study, STEMI/NSTEMI rates in widow/divorced patients (45.2% and 33.8%, respectively) were considerably higher than those found in the current study (7.3% and 9.7%, respectively) (23).

Our results showed that married men have a higher AMI prevalence rate (96.8%) compared to married women (78.3%). This could be explained by higher stress levels in men due to family management responsibilities and longer hours of working. Noteworthy, dissimilar results were found among divorced men. Widowed/divorced women have a significantly higher probability of AMI prevalence as compared to men. This might be a result of gender inequality in terms of economic or social status in our country. In this regard, women are kept in subordinate positions and they are not adequately independent, particularly in rural regions. As a result, these women experience more stress and depression and have a higher possibility of AMI occurrence (24). Of note, cultural differences should be considered when comparing the effects of marital status on diseases, in different populations.

Our results showed that there is a seasonal pattern in AMI prevalence with most of the cases occurring in summer and spring. This increase in winter may be a result of respiratory infections occurring in this season, increased body metabolism in cold weather and probable influence of vasomotor reflexes. The exact cause of the increase in the number of cases in spring and summer is unknown. But, it should be noted that heat loss and adjustment of the body temperature can increase blood volume and consequently enhance cardiac output. Arterial blood pressure decreases under these conditions. Marked loss of fluid and salt through the skin, should also be considered because, in the absence of fluid and salt replacement, extracellular fluid and plasma volumes may reduce. It is possible that in some cases, heat may act as a predisposing factor for AMI.

In a study that was performed in the United States, the association between LOS and hospital readmission and AMI was examined. The average of LOS for AMI patients was 3.5 days (median: 3 days and range: 2 - 4 days) that was shorter than LOS observed in our study (6.0 ± 5.0 days; median: 5 and range: 0 - 60) (25). Also, NSTEMI patients had longer LOS than that of STEMIs which might be attributed to the need for longer cardiac monitoring or staged coronary procedure. Delay in complementary examinations (e.g. echocardiography) or admission/discharge during weekends/nights, may have also increased the LOS. Similar to our results, several studies showed that hospital readmission rate was higher in patients who had a longer LOS compared to those who had a shorter hospital stay (25). Nevertheless, some studies showed no significant changes in LOS and 30-day readmission (26). Increasing the awareness of the society about AMI, having a good lifestyle after discharge and early referral to the hospital for decreasing the mortality rate, are recommended.

This study utilized data from comprehensive databases from two major tertiary hospitals that cover a large part of eastern Iran. This is the first report from Mashhad, Iran that investigates AMI in a large population.

Over the past 10 years, the number of patients with different types of AMI has increased. However, the in-hospital mortality rate has decreased. This reduction may be due to increased knowledge about the biology of ACS, development of new medications and treatment protocols and enhanced public awareness of this disease. Close cooperation between general practitioners, health providers and cardiologists are of great importance in this field.

As we did not have access to patient files in this retrospective cross-sectional study, there might have been some missing data during data collection. Additionally, investigating a few variables is another limitation of our study.

Copyright © 2022, Multidisciplinary Cardiovascular Annals. This is an open-access article distributed under the terms of the Creative Commons Attribution-NonCommercial 4.0 International License (http://creativecommons.org/licenses/by-nc/4.0/) which permits copy and redistribute the material just in noncommercial usages, provided the original work is properly cited.
download pdf 149.11 KB Get Permission (article level) Import into EndNote Import into BibTex
Number of Comments: 0