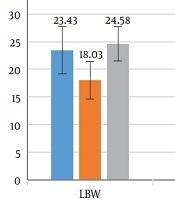 Comparison of Motor Development in Preterm, and Term Children Aged 3 to 7 Years

Human development is influenced by genetic, environmental, and social factors whose foundation is formed from infancy and childhood. Preterm birth and low birth weight are important issues that can affect the development and threaten the public health.

The aim of this study was to evaluate and compare motor development manipulation, balance, aiming, and receiving in low, very low birth weight, and normal children aged 3 to7 years.

The human development is influenced by genetic, environmental, and social factors, with its foundation laid in the embryonic and neonatal life. Preterm birth and low birth weight are important issues that can affect the development and threaten public health. Anderson et al. (3) as well as Arnaud et al. (4) found that many future low birth weight infants will have motor, cognitive, and sensory problems in the future. Undoubtedly, one of the world’s problems is the presence of people with physical or brain damage from preterm birth or low birth weight, yet many of these disorders are not diagnosed in a timely manner. On the other hand, predicting newborn’ late and long-term complications is an essential part of ongoing assessment and care (5). In addition, it has been shown that preterm children have a higher rate of inattention and internalizing behaviors, and are weaker in adaptive skills than their term peers (5). Various researchers in separate studies have shown that preterm children have many problems such as disability, cerebral palsy, sensory disabilities, poor cognitive function, impaired brain topology organization, particularly brain network communication capacity, and simple (hit-to-wall coins, heel-to-toe walking, and toe-standing) plus sophisticated (coordination, balance, and manipulation skills) motor problems, as well as poor performance in coarse and fine motor skills (6). Note that these motor problems persist through adolescence and adulthood, affecting the school performance and self-esteem (7).Thus, given the importance of basic motor skills in early childhood, evaluating motor skills at this stage and developing them for children, especially preterm children, is critical to monitoring developmental progress and identifying apparent developmental delays (8).The main purpose of this study was to evaluate developmental skills including hand skills, aiming, receiving, and balance in preterm children and to compare them with term children in the age group of 3 to 7 years.

Due to motor problems in early childhood and the need for early intervention to eliminate motor disorders in these children, it is required to identify their problems precisely for taking the necessary measures to resolve them. The MABC-2 test is a standard and accurate tool for measuring motor skills and diagnosing developmental coordination disorder used in the UK and US whose validity and reliability have been confirmed. Overall, the purpose of this study was to compare the motor development (hand agility, balance, aiming and receiving) in low, very low birth weight, and normal children.

The present study is a comparative study conducted on preterm and term groups. The statistical population of the study included children aged 3 to 7 years who were bornpreterm (< 37 weeks of gestation) with low birth weight (< 2500 g) who were admitted to NICU wards in Farideh Behbahani and Imam Khomeini hospitals of Behbahan and Kohgiluyeh for some time. After the necessary coordination with the health network officials and hospitals administrators, the list and telephone number of all children were obtained. Then, by contacting families, the individuals who were willing to participate were selected as the sample (i.e., available sampling). Note that normal children were randomly selected; out of the sample population, 78 children were selected as the sample. The children were divided into four groups of (1) low birth weight children weighing 1501 to 2500 grams (n = 30), (2) low birth weight children weighing 1000-1500 grams (n = 13), (3) twin children weighing less than 2500 grams (n = 20), and normal children weighing more than 2500 grams (n = 15). Inclusion criteria were low birth weight (for preterm groups), lack of regular daily physical activity or specific sport from birth to entry into the research. Exclusion criteria comprised children with cerebral palsy, autism, or learning disabilities. All subjects participated in the study with their informed consent and their parents’ written consent. To compare children’s motor development, Movement Assessment Battery for Children (version 2) was used. The reliability of this test among 6-year-old children in Isfahan province was estimated to be 98% in 2015, and its validity was 0.77 (9).

Also, Movement Assessment Battery for Children (version 2) (MABC-2) test was applied which has 3 subscales in 8 sub-tests in the motor section:

The MABC-2 test takes approximately 20 to 40 minutes for each child, depending on the age of the child, the degree of difficulty of the task, and the tester’s experience. The MABC-2 test involves a traffic light system consisting of three areas of red (individual score below 5% and with DCD), yellow (score between 6% - 15% and DCD at risk), and green (over 15% without DCD and having typical growth TD). Descriptive statistics were used to classify and sort the data as well as to determine the mean and standard deviation, and to draw graphs and tables under different conditions. The Kolmogorov-Smirnov and Levene’s tests were applied to examine the normality of the data distribution and homogeneity of variances, respectively. Due to the homogeneity of variances and normality of distribution, one-way ANOVA and Tukey’s post hoc analysis were employed to analyze the data (P ≤ 0.05).

In order to quantify the characteristics of the participants, the mean and standard deviation of all groups were obtained in this study, whose findings are presented in Table 1. Also, to quantify the mean differences in the study groups, one-way ANOVA was used (Figure 1).

Mean scores of measured skills in the research groups

The results of Tukey’s post hoc test in Table 2 show that on the manipulation scale, the mean difference between the term and LBW children is 8.70, which had a significant difference (P = 0.001). This means that LBW children performed poorly on the manual skills variable when compared to term children. Similarly, comparing normal children with, VLBW and twins group, with significance level of P = 0.001, it is concluded that these children also performed poorly on manipulation compared to the normal children. The results of Table 2 show that regarding the balance, aiming, and catching variables, term children performed more significantly better than other groups (P < 0.05). Also, the results revealed that manipulation and balance in children with VLBW were significantly (P = 0.025 and P = 0.000) lower and at a higher risk compared to the LBW group. However, this difference was not significant in the aiming and catching variables (P = 0.356, mean difference = 2.87).

Table 3. Mean and Standard Deviation of the Sub-Tests in the Research Groups

Normal curve and traffic light system in the MABC-2 test

Despite advances in technology in the neonatal period and increased life expectancy in preterm infants, there is still little information About these children. Preterm children generally experience cognitive and motor problems. The prevalence of cognitive disabilities and poor educational outcomes in this risk-exposed population is high, especially for preterm children (2). Many of these complications have lifelong consequences for the health and development of these infants. Preterm infants are at a later stage of developmental delay than their term counterparts (10). There is evidence that many babies born preterm are medically free of neurological consequences, being more susceptible to balance and developmental coordination disorder in school-age (11). Overall, recent studies on disabled infants and toddlers have shown that preterm children are more likely to have motor developmental delays than others (4, 12). Mild motor problems increase during pre-school and adolescence (13). The results of this study can be reviewed in several aspects. Initially, comparison of the results between term and preterm infants shows a significant difference in all skills of the test (manipulation, aiming, catching, and balance). This is in line with the results of Ghasemi et al. (1), Rodriguez Fernandez et al. (14), and Marlowe et al. (15). In explaining these findings, it can be noted that basic motor skills are the foundation of one’s entire life experiences. In the past, it was thought that motor skills were developed solely based on maturity Thus participation in motor training did not affect on motor skills development. However, today research shows that early intervention and early childhood education influence the development of basic skills (15). Thus, it seems that training opportunities and environmental factors in the early infancy and early childhood were not sufficient in the research participants and there was no compensation in low and very low birth weight children. Groschel et al. (16) in a study to identify and interpret the microstructural abnormalities of the motor pathway in preterm adolescents investigated and compared term and preterm adolescents using MRI imaging. The results showed that there was a significant difference between the term and pre-term groups at several levels including the cortical-spinal cord, thalamic-spinal cord, and motor pathways. In summary, the structure of white matter in the motor pathways in pre-term adolescents had changed. Thus, it seems that white matter structure, brain network communication capacity, and power, as well as differences in motor pathways, along with neuropsychological risk in preterm children, are altered in preterm children and lead to their poorer motor skills.

The second part of the results showed the relationship between birth weight and motor performance of children, with VLBW children performing worse than LBW children, which is in line with the results of other researchers such as Delane et al. (2016), Saigal et al. (7), and Ghasemi et al. (1). In this regard, according to Brown et al. (17), who stated that there is a significant relationship between birth weight and motor skill, the present study also found that a significant difference between VLBW children in manipulation and balance skills as well as some subscales compared to LBW children. In explaining this finding, research suggests that longer pregnancy is associated with improved adolescent brain topology before maturity. This is associated with enhanced communication capacity of the brain network and the ability of different parts of the brain to connect to central areas of cerebral cortex. Thus, it seems that with the rise or fall of weight, the children’s score on the Mabc-2 test is likely to grow or diminish. As such, birth weight can be a good indicator for the diagnosis of childhood motor disorders, which is not in line with the findings of Rodriguez Fernandez et al. (14) and Lorefice et al. (6). In addition, there were no significant differences between some of the skills, including aiming and catching beanbag between low and very low birth weight children. This finding is consistent with the results of Rodriguez Fernandez et al. (14) and Brown et al. (17). The researchers found that children scored higher on aiming and receiving skills than on balance and manipulation. The lack of differences in some tests can be due to the younger age of starting some basic skills and practicing more during childhood, such as catching and throwing which start from early childhood, being almost completed by the age of four, when learning is effective (1).

Overall, the results of this study suggested that preterm children had a poorer performance in manipulation, aiming, catching, and balance compared to term children. Meanwhile, comparing the test subscales with the traffic light system available in the MABC-2 test, it was found that VLBW children performed significantly worse in subscales of posting coins, spinning the beads, threading beads, one-leg balance, and walking heels raised compared to the LBW and twin children, and fell in the red and yellow areas requiring urgent care and attention.

Considering the fact that the present study is a part of the doctoral dissertation approved by Science and Research branch of Islamic Azad University, the authors of this article express their gratitude and appreciation for the spiritual support of the Research and Technology Department of this university branch.