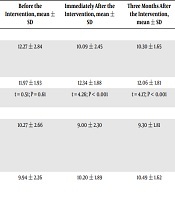 Effectiveness of Spiritual Therapy on Depression, Anxiety, and Stress in Hemodialysis Patients

This study was conducted to evaluate the effectiveness of spiritual therapy on depression, anxiety, and stress in hemodialysis patients referred to the dialysis ward of special diseases center of Birjand in 2019 - 2020.

In this semi-experimental study, 70 patients with chronic kidney disease (CKD) under hemodialysis referred to the dialysis ward of special diseases center of Birjand in 2019 - 2020 were selected by available sampling method and randomized into two experimental groups (35 patients) and control (35 patients). The patients in the experimental group received eight sessions of 60-minute (one session per week) of spiritual intervention therapy, and the control group received no spiritual intervention. Data collection tools were a form of demographic profile and Lovibond SH and Lovibond PF (1995) questionnaire. Data were analyzed using SPSS 26 statistical software, and Fisher’s exact test, chi-square test, independent t-test, repeated measures ANOVA, Bonferroni post hoc test at a significance level of P < 0.05.

In this study, 68 patients were ‎examined in two experimental (33 patients) and control (35 patients) groups.‎ The mean score of depression, anxiety, and stress before the intervention in patients in the ‎experimental and control groups was not significantly different ‎(‎P‎ =‎ 0.61‎)‎, but immediately and three ‎months after the intervention in patients in the experiment group was significantly lower than the ‎control group (P < 0.001).‎

Based on the results of the present study, it can be said that spiritual therapy is considered an effective solution for reducing depression, anxiety, and stress in hemodialysis patients.

Chronic kidney disease (CKD) is a destructive and progressive disease that disrupts the water balance, electrolytes, and metabolism of the body (1, 2). End-stage renal disease (ESRD) is a severe type of CKD and is the final stage of an irreversible, progressive renal disorder (3). The global prevalence of all-stage CKD is 9.1% (4), and the overall prevalence of chronic kidney disease is 15.14% in Iranian people (3). The most important psychological problems of dialysis patients are anxiety, depression, stress, and in the severe stages of the disease, frustration, denial, and reluctance to continuing treatment (5, 6). Marvi et al. (7) stated that dialysis patients often face many psychological problems due to lifestyle changes and treatment methods. Moreover, anxiety, depression, and stress are the most common of these problems, which lead to the patient’s death in severe cases.

The results of the studies showed that there is a significant relationship between depression, anxiety, and stress and non-compliance of hemodialysis patients with the recommended diet and even necessary treatments, which can endanger the patient’s health and accelerate their mortality (8-10). In addition, most dialysis patients have limitations in their physical role, emotional role, job status, job performance, and low quality of life (11, 12). In these patients, self-reliance and religious faith are compromised, the mechanisms of adaptation and communication are disrupted due to uncertainty about the future, and spiritual crisis emerges in the person (13). Spiritual therapy means considering the cultural-religious beliefs in the healing process and considering the transcendent dimension of the clients. This transcendent dimension leads them to God (14). In other words, spiritual therapy is a type of psychotherapy that uses special principles and uses spiritual-religious methods to help patients achieve a transcendental perception of themselves, the world, events, and gain health and growth through the connection with this transcendental world (15).

This study was conducted to evaluate the effectiveness of spiritual therapy on depression, anxiety, ‎and stress in hemodialysis patients referred to the dialysis ward of special diseases center of ‎Birjand in 2019 - 2020.

In this semi-experimental study, among CKD patients under hemodialysis referred to dialysis ward of special diseases center of Birjand in 2019 - 2020, 70 patients were selected according to inclusion criteria by available sampling method who were randomly divided into the experimental (35 patients) and control (35 patients) groups. The sample size is based on the below formula and based on the study of Kiani et al. (16). According to the average dimension score in the two experimental and control groups (s1 = 10.29, s2 = 13.64, m1 = 22.31, m2 = 34.96), 19 patients were calculated to be assigned to this study, taking into account the percentage of attrition, 35 people were considered in each group.

The inclusion criteria were ESRD and being under hemodialysis in dialysis centers, having a history of hemodialysis treatment for at least one year, the lack of other chronic diseases such as cardiovascular disease, musculoskeletal diseases, cancer types, the lack of known mental illness, at least 30 years of age, having a minimum of literacy (being able to read brief texts on familiar topics and locate a single piece of specific information). The exclusion criteria were the use of sedatives, infectious diseases, absence of more than two sessions in training sessions, and unwillingness to continue the study.

A list of 70 patients was prepared, and between the first two people, a lottery was drawn using ‎coins, and according to this, the people were divided into two groups, after explaining the objectives of the study and obtaining informed consent, the demographic profile form, and the Lovibond and Lovibond (17) ‎depression, anxiety, and stress questionnaire (1995) were completed by individuals in both groups. Then, the patients in the experimental group received spiritual intervention in 8eight sessions of 60 minutes (one session per week) and the control group did not receive any spiritual intervention. The training sessions were given by a psychologist with a master’s degree who had passed spiritual therapy courses. This treatment program had five sections and eight group-therapy sessions, which began in December 2019 in Birjand special diseases center as shown in Table 1 (15, 18, 19).

One week and three months after the spiritual therapy sessions, the depression, anxiety, and stress questionnaires were completed by patients in both groups. In order to observe the ethical considerations after the intervention, the training session content was provided to the control group patients. It should be noted that two patients in the experimental group were excluded from the study due to the absence in more than two sessions in the training classes and the final analysis in the experimental group was performed on 33 patients.

The research was registered with the IR.BUMS.REC.1399.027 ID in the Research Ethics Committee of Birjand University of Medical Sciences. Data were analyzed using SPSS 26 statistical software and Fisher’s exact, chi-square, independent t-test, repeated measures ANOVA, and Bonferroni post hoc at a significance level of P < 0.05.

Table 2. Comparison of Demographic Characteristics in Patients of the Two Groups

Table 3. Comparison of Mean Scores of Depression, Anxiety, and Stress in Predefined Checkpoints in Patients of the Two Groups and Separately in Each Group

This study was conducted to evaluate the effectiveness of spiritual therapy on depression, anxiety, ‎and stress in hemodialysis patients referred to the dialysis ward of the special diseases center of ‎Birjand in 2019 - 2020.‎ The results of the present study showed that the mean score of depression was significantly lower immediately and three months after the intervention in the patients of the experimental group than in the control group. Accordingly, spiritual therapy is effective in reducing depression in hemodialysis patients. Loureiro et al. (21), in examining the effect of spirituality on the mental health of patients under hemodialysis, concluded that spirituality has a positive and significant effect on reducing depression in patients. The results of a study by Moritz et al. (22) suggest that spiritual content, including spiritual awareness of self-forgiveness, compassion, appreciation, and daily life Acceptance, reduces depression. In addition, the results of studies by Cha et al. (23), Rentala et al. (24), and Hourani et al. (25) also indicate the effect of spirituality on patient depression (23-25), which is consistent with the present study findings. Spirituality is one of the dimensions of human beings that shows the connection and integration of the individual with the universe. Communication and integration give people hope and meaning and bring them beyond the boundaries of time, place, and material interests and play an important role in improving depression (26). Spiritual interventions act by changing patients’ attitudes toward life or illness. In other words, in cognitive assessments of the patient under the influence of personal beliefs and values such as self-control and religious beliefs, stressful factors are determined and then appropriate treatment strategies are used. Spirituality and religious beliefs and practices are effective in adapting patients to existing conditions by finding life meaning (27). Accordingly, spiritual therapy can fill a person’s spiritual gaps and reduce depression (28, 29).

The results of the present study show that the mean score of anxiety immediately and three months after the intervention in patients in the experimental group is significantly lower than the control group. Accordingly, spiritual therapy is effective in reducing the hemodialysis patient’s anxiety.

Kiani et al. (16) concluded that spiritual therapy reduces the average anxiety score of cancer patients. In this regard, the results of the study of Boscaglia et al. (30) suggest that spiritual therapy has a positive and significant effect on reducing anxiety in women with cancer. Despite the differences in the statistical community, these results are consistent with the present study findings. In addition, the results of studies by Chaar‎ et al. (31) and Sankhe‎ et al. (32) also indicate the spirituality effect on patients’ anxiety, which is consistent with the present study findings. According to the present study results and the results of studies conducted in this field, it can be stated that spiritual therapy is one of the important methods in anxiety disorders treatment. Believe in God and trust in Him creates a security sense in the anxious person, which provides the ground for reducing the negative perception of the threat and assessing the danger, especially in situations that are uncontrollable or unpredictable. Because one considers world events to be in the possession of an active and wise leader. He believes that world events are based on wisdom and that all things happen by the will of God (33). So, this mentality can reduce the threat feeling in an anxious person.

The present study results showed that the mean stress score immediately and three months after the intervention in patients in the experimental group was significantly lower than the control group. Accordingly, spiritual therapy is effective in reducing hemodialysis patients’ stress. Kiani et al. (16) concluded that spiritual therapy has an effect on the mental health of cancer patients and reduces the average stress score of patients. In addition, the studies of Kucuk Alemdar ‎et al. (34), and Rowold (35) also demonstrate the spirituality effect on patient stress, which is consistent with the present study findings. People manage their stress based on available resources and through a variety of coping methods. According to this viewpoint, beliefs provide important cognitive assessments to the people, and therefore spirituality can help a person to evaluate negative events in a different way. Thus, spirituality creates a stronger control sense and help to psychological adjustment (15). In other words, for people who use spiritual mechanisms, their immune systems work better and cope with more effective coping strategies such as reassessment and problem-solving with greater psychological stress, and ultimately reduce their stress (36).

Patients on hemodialysis often use their spiritual and religious beliefs as a way to deal with illness. Based on the results of the present study, it can be said that spiritual therapy is considered an ‎effective solution for reducing depression, anxiety, and stress in hemodialysis patients. Further research is necessary to elucidate the effects of spiritual therapy on other settings and populations.

We thank and appreciate all the people who participated in this research project, especially hemodialysis patients. We are also very grateful to the esteemed officials of Birjand Special Diseases Center, and Birjand University of Medical Sciences.

Copyright © 2020, Modern Care Journal. This is an open-access article distributed under the terms of the Creative Commons Attribution-NonCommercial 4.0 International License (http://creativecommons.org/licenses/by-nc/4.0/) which permits copy and redistribute the material just in noncommercial usages, provided the original work is properly cited.
download pdf 151.47 KB Get Permission (article level) Import into EndNote Import into BibTex
Number of Comments: 0