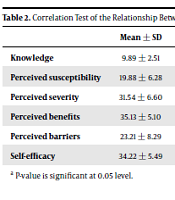 Human immunodeficiency virus (HIV)/AIDS is one of the most substantial socioeconomic health issues in many countries all around the world.

This study aimed to address the factors affecting AIDS preventive behaviors in women who had addicted husbands using the health belief model (HBM) in Sarbishe and Birjand cities, Iran, in 2019.

A descriptive-analytical study was conducted on 224 women who had addicted husbands. A convenience sampling method was used, and all women whose husbands were under the support of the public and private addiction treatment centers were entered into the study. Data collection tools included a questionnaire of demographic items, HBM constructs, knowledge, and AIDS preventive behaviors. The collected data were analyzed using a correlation test and a regression model. The p value was considered less than 0.05 to be significant.

Human immunodeficiency virus (HIV) infection remains a significant social issue worldwide (1). Besides, HIV/AIDS is the second cause of mortality globally, and 5,000 new infections occur each day (2). As a lethal disease that breaks down the immune system of the human body, HIV/AIDS makes the victim susceptible to life-threatening infections, unusual malignancies, and neurological disorders (3). Moreover, AIDS is known as a critical health problem because of HIV spread, numbers of infected individuals, the prolonged period between infection onset and appearance of symptoms, and unavailable effective vaccines or definite treatment (4). According to WHO statistics, about 36.9 million people were living with HIV in 2017 of whom, 80% were in the age range of 15 - 49 (5). According to statistics released by the National AIDS Working Group, there were 60,000 people diagnosed with HIV/AIDS up to the end of summer 2019 of whom, 82% were men, and 18% were women (6). The reasons for acquiring the disease included transmission through injection (60.1%), sexual contact (22.2%), mother to child transmission (1.7%), and unknown sources (15.8%). The transmission patterns and infection percentages among men and women have changed recently so that sexual contact has exceeded other methods, and women have been more infected relative to men (6). Therefore, the awareness of the attitudes and behaviors of the female population is one of the main determinants for the battle against HIV infection and AIDS (7).

Drug addicts are at risk of HIV, so that all HIV cases reported in some Eastern European and Asian countries are among addicts (8, 9). Because addicts have more high-risk sexual behaviors, addiction plays a role in HIV/AIDS spread to other social groups. Therefore, HIV risk is not just limited to addicts, but it may transmit to their sexual partners, children, and other social groups. On the other hand, the high possibility of family separation may make their wives having other sexual partners or any hazardous sexual relationship (10). Preventive behaviors can be adopted to prevent AIDS spread to risk groups such as the spouses of addicts. Such behaviors, however, are not shaped in risk groups, including the low use of condoms by men, having sex with strangers, being with several sexual partners, drug injection, sharing needles, and using shared sharp tools in hairdressers (11, 12). Considering the infection process and groups exposed to HIV/AIDS risk, the most significant barriers to prevention programs are the lack of enough knowledge of AIDS and its transmission ways, low self-efficacy, improper attitude toward condoms, having multiple sexual partners, lack of ethical adherence in the relationship with a sexual partner, the vulnerability of women to AIDS due to biological, cultural, social, and economic factors, etc. (7, 12, 13).

Of various models designed for behavior change, the health belief model is the best option to address factors affecting preventive behaviors. Health belief model (HBM) is one of the theories designed to explore preventive healthy behavior if a person has a positive expectation. Thus, the perception of an individual can be affected by sociodemographic factors, level of knowledge, threat, available interventions, and/or their barriers, and influence of others (14). The fundamental concepts of HBM comprise perceived susceptibility (person’s opinion about possible health problem), perceived severity (person’s belief of problem severity), perceived benefits (person’s imagination of the efficiency of recommended health behaviors), perceived barriers (economic costs and mental obstacles to recommended health behaviors), and self-efficacy (person's self-confidence to take action) (15). A study proved the efficiency of HBM as a predictor of AIDS preventive behaviors (16). As a risk group exposed to the transmission of infection from their spouses, women with addicted husbands have received little attention from researchers.

This study was conducted to examine the factors affecting the adoption of AIDS preventive behaviors in women with addicted husbands using HBM in Sarbishe and Birjand cities, Iran, in 2019.

A descriptive-analytical study was carried out on 224 women who had addicted husbands. Subjects were selected from the addiction treatment and health centers in Birjand and Sarbishe, Iran, from May to August 2019. As a regression analysis was used for assessing the effect of independent variables (15 variables) on AIDS preventive behaviors, a maximum sample size of 225 was sufficient for data analysis. To this end, a convenience sampling method was used, and all of the women whose husbands were under the support of the public and private addiction treatment centers and women introduced by other participants were allowed to participate in the study. Women with incomplete questionnaires were removed, and other subjects were replaced.

A standard questionnaire was used as a data collection tool that included two parts. The first one addressed the demographic features (age, economic status, spouse's addiction type, and duration, etc.), and the second part assessed the knowledge level and HBM constructs (16). The knowledge part comprised eight items, of which, two items were multipoint, and six items were scored based on Yes/No responses (true = 1 and false = 0). The HBM constructs included perceived susceptibility about AIDS (six items), perceived severity about AIDS (10 items), perceived benefits of AIDS preventive behaviors (10 items), and perceived self-efficacy toward AIDS-preventive behaviors (eight items). Responses to the above-mentioned constructs were scored based on a 5-point Likert scale (agree = 5; somewhat agree = 4; no idea = 3; somewhat disagree = 2; disagree = 1). The construct “perceived barriers to AIDS preventive behaviors” included six items that were scored based on a 5-point Likert scale (agree = 1; somewhat agree = 2; no idea = 3; somewhat disagree = 4; disagree = 5). Cues to action and AIDS preventive behaviors constructs were evaluated using five items and three items, respectively, in the form of Yes/No questions (true = 1 and false = 0). Educated women filled out the questionnaires themselves, and illiterate women were interviewed to collect data. The content validity of the measure was determined and approved by a panel of 10 health education experts. The correlation coefficients for the test-retest reliability in different parts of the questionnaire were reported between 0.81 and 0.85 (16). To assess the reliability of the questionnaire in this study, 20 women of the target population completed the questionnaire. A test of internal consistency was used to ensure the reliability of each subscale in the questionnaire. Cronbach’s α was adequate for perceived susceptibility (α = 0.77), perceived severity (α = 0.81), perceived benefits (α = 0.75), perceived barriers (α = 0.79), perceived self-efficacy (α = 0.78), and total scale (α = 0.75) (α ≥ 0.70).

The collected data were inserted into SPSS-22 software. First, the relationship between HBM constructs and knowledge was examined using a correlation test. Then, a regression model was used to find the effect of perceived susceptibility, perceived severity, perceived benefits, perceived barriers, self-efficacy, knowledge, and demographic features on AIDS preventive behaviors of women who had addicted husbands. A significance level of P<0.05 was considered for all research hypotheses.

The respondents’ mean age was 37.77 ± 8.97 years and the mean number of their children was 2.79 ± 1.60. Besides, 93.8% were housekeepers and 54% of them had self-employed husbands. Most women (61.6%) and their husbands (58.9%) had an education level of under-diploma, and 44.2% of the subjects had a monthly income of fewer than 5,000,000 Rials. About 36.4% of the participants acquired their awareness of AIDS from health centers. The demographic characteristics of studied subjects are reported in Table 1.

Table 2. Correlation Test of the Relationship Between Health Belief Model Constructs and Awareness

Table 3. Regression Model to Determine the Effect of Health Belief Model Constructs on AIDS Preventive Behaviors in Women with Addicted Husbands a

bP-value is significant at 0.05 level

As a fatal viral disease with high infectivity and spread rate, AIDS can lead to immune system deficiency (4). Addicted people are highly at risk of AIDS (8, 9). The HIV risk is not just limited to addicts, but it may transmit to their sexual partners, children, and other social groups. On the other hand, the high possibility of family separation may make their wives having other sexual partners or any hazardous sexual relationship (10). Preventive behaviors can be adopted to prevent AIDS spread to risk groups such as the spouses of addicts. Such behaviors, however, are not shaped in these risk groups (11, 12). This study was conducted to examine the factors affecting the adoption of AIDS preventive behaviors in women with addicted husbands using HBM in Sarbishe and Birjand cities, Iran, in 2019.

There were some constraints in this research, including the low education level of the studied group, difficulty access to this target group, women's fear of referring to addiction treatment centers to complete questionnaires due to social stigma, and improper self-report process. On the other hand, the sample of this study was composed solely of women with addicted husbands in South Khorasan province. The results of this study should not, therefore, be generalized to women of other provinces of Iran. Despite the above limitations, one of the most important strengths of this study was the survey of cognitive factors affecting AIDS preventive behaviors in a neglected target group of women with addicted husbands.

According to the obtained results, self-efficacy is the most substantial predictor of AIDS preventive behaviors in women who have addicted husbands. Possible barriers include the lack of awareness of the AIDS lab test and laboratories that take this test, individuals' fear of the positive result of the test, social stigma to doing this test, the shame of buying a condom, and the lack of knowledge of the place to buy a condom, which can diminish women’s self-efficacy to adopt AIDS preventive behaviors. Therefore, these barriers must be reduced as much as possible by emphasizing the perceived self-efficacy of women to adopt AIDS preventive behaviors. Because it was hard to access the studied subjects, addiction treatment centers and other healthcare centers should take measures to identify vulnerable women by holding training interventions.

This paper was extracted from a thesis approved by the Birjand University of Medical Sciences under Code 455843 and Ethics Code Ir.bums.REC.1398.36. The authors thank the honorable Research Deputy of the Birjand University of Medical Sciences and Healthcare Services of Birjand, and appreciate all officials of Birjand Faculty of Health, women, officials of methadone therapy centers, and addiction treatment centers who collaborated in this research.

Copyright © 2020, Modern Care Journal. This is an open-access article distributed under the terms of the Creative Commons Attribution-NonCommercial 4.0 International License (http://creativecommons.org/licenses/by-nc/4.0/) which permits copy and redistribute the material just in noncommercial usages, provided the original work is properly cited.
download pdf 139.50 KB Get Permission (article level) Import into EndNote Import into BibTex
Number of Comments: 0