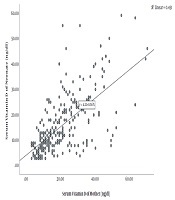 Correlation of Vitamin D Serum Level of Mothers and Their Newborns

The possibility of vitamin D deficiency is high among mothers and their premature newborns.

Due to the high rate of vitamin D deficiency in Iranian women, this study aimed to determine the association between the serum levels of vitamin D in the blood of premature newborns and their mothers in the Iranian population.

This cross-sectional study was conducted on 324 mothers and their 324 newborns with gestational age less than 37 weeks, who were referred to Ghaem Hospital affiliated to Mashhad University of Medical Sciences, Mashhad, Iran, during 2016-2020. After clamping, 1.5 cc blood samples were obtained through the umbilical cord to determine the neonates’ vitamin D levels. Finally, the serum levels of vitamin D were measured, and the correlation between the levels of vitamin D of mothers and their newborns was calculated.

Prematurity is associated with increased neonatal and childhood morbidity and mortality (1). Premature neonates weighing less than 1,500 g have far more problems and need more intensive care. According to the studies performed in Iran, about 28% of neonatal mortality is due to prematurity (2, 3). The probability of the survival rate of high-risk infants, including premature infants, has increased recently with the advancement of perinatology (4).

Pregnancy is a risk factor for vitamin D deficiency; accordingly, it can lead to an extra load reducing 25-hydroxyvitamin D levels in pregnant women (9). Serum 25-hydroxyvitamin D levels less than 25 ng/mL during pregnancy are estimated at 17% - 18%, 12% - 34%, and 80% in Caucasian (10), Indian (10), and Iranian women (11), respectively. Moreover, the level for pregnant mothers in China was found to be 28% - 54% nmol/L (12-14). Decreased levels of mothers’ vitamin D can reduce the transmission of vitamin D through the placenta. Therefore, the newborns’ storage of vitamin D decreases at birth (15).

Vitamin D is a steroid hormone that has been known for years to play a classic role in mineral balance, bone metabolism, and neuromuscular function. Moreover, vitamin D has a remarkable effect on the regulation of more than 1,000 genes involved in biological processes, angiogenesis, inflammation, and immune function (16, 17). The concentration of vitamin D in the fetus depends on the concentration of vitamin D in the mother. Vitamin D deficiency is common during pregnancy and is associated with an increased risk of fetal growth restriction, sepsis, and lower respiratory infections (18-20). It is worth mentioning that this vitamin has a significant influence on many neonatal diseases, including neonatal respiratory distress syndrome, cerebral hemorrhage, and premature retinopathy (21, 22).

This single-center, cross-sectional study was conducted on premature newborns who were referred to Ghaem Hospital affiliated to Mashhad University of Medical Sciences, Mashhad, Iran, during 2016 - 2020.

The inclusion criteria were mothers and their newborns with gestational age less than 37 weeks. On the other hand, epileptic and asthmatic mothers, as well as their newborns, were excluded from the study.

The data were analyzed in SPSS software (version 23). The Pearson correlation was used to determine the relationship between variables. A P-value of less than 0.05 was considered statistically significant.

The study protocol was approved by the Ethics Committee of Mashhad University of Medical Sciences, Mashhad, Iran (no.: HYPERLINK “http://research.mums.ac.ir/main/cartable.action”960406) IR.MUMS.fm.REC.1396.635. Consent was obtained from neonates’ parents before doing the research. In line with the principles of research ethics, a code was given to ensure the confidentiality of data.

In this study, we assessed 324 serum levels of vitamin D in mothers and their neonates. There was a significant correlation between the vitamin D levels of mothers and their newborns (r = 0.672; P < 0.001). Regarding the descriptive statistics, the majority of the newborns (52.5%, n = 168) were males. Moreover, the mean age of the mothers was 29.6 ± 6.64 years. Table 1 indicates the demographic characteristics, including maternal age, gestational age, and neonatal birth weight. The assessment of the type of delivery showed that 79 (30.9%) mothers had normal vaginal deliveries, and 177 (69.1%) mothers had cesarean sections. Moreover, the mean vitamin D levels of newborns and mothers were 15.75 ± 11.18 and 20.16 ± 13.41 ng/mL, respectively (Table 2).

Table 1. Demographic Characteristics of Newborns
Table 2. The Status of Vitamin D Deficiency in Mothers and Neonates 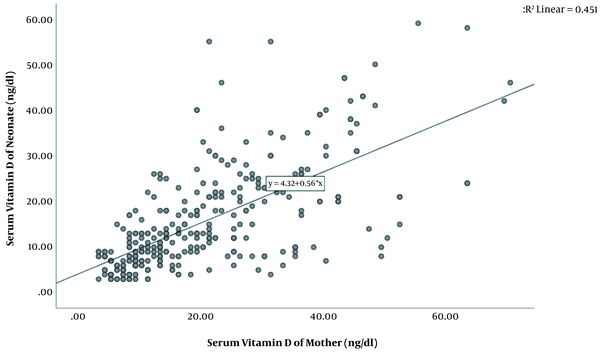 Moreover, about a quarter of pregnant women with preterm birth were severely deficient in vitamin D. It was also observed that 43 (13%) newborns had severe vitamin D deficiency. According to a study carried out by Dawodu and Nath (25), a relationship was found between the high prevalence of maternal vitamin D deficiency and vitamin D stores of prematurely born Arab neonates. The obtained result was confirmed in the community (29). In another study, serum 25-hydroxyvitamin D concentrations of less than 12.5 nmol/L were reported among 44% of preterm infants, which is compatible with the metabolic bone disease (30).

Since insufficient maternal vitamin D levels may lead to neonatal vitamin D deficiency, which is higher among preterm birth, it is of utmost importance to use vitamin D supplementation during pregnancy as a strategy to maintain vitamin D sufficiency in both mothers and their newborns (33). The American Academy of Pediatrics introduced guidelines for vitamin D intake to prevent rickets and vitamin D deficiency in healthy neonates. In this guideline, a daily supplement of 400 IU/day of vitamin D should be given to newborns from the first few days of life and continued throughout childhood (34).

According to our findings, both mothers who did not take vitamin D supplementation during pregnancy and who used vitamin D supplementation during pregnancy had vitamin D levels in high correlation with those of their newborns, but this does not mean that taking vitamin D supplement has little effects. This finding can be justified as follows. The consumption of vitamin D in the third trimester of pregnancy in mothers increased its serum level in the mother, but due to the high vitamin D demand of fetal tissues, this vitamin was absorbed by fetal tissues, and the serum levels in the fetus did not increase as much as we expected. Some studies have shown that injecting vitamin D into the mother during delivery, despite not increasing the serum levels of vitamin D in the newborn, has led to the benefits of receiving vitamin D, such as reducing neonatal respiratory distress (37).

To conclude, the optimal vitamin D requirement of preterm newborns should be determined considering mothers’ vitamin D levels during pregnancy and geographical locations (25). Due to the high prevalence of vitamin D deficiency among Iranian women, vitamin D supplementation should be used to ensure vitamin D sufficiency in high-risk infants, including prematurely born neonates.

Limitations of the Study: Although this study paved the way for the evaluation of vitamin D levels in premature newborns, it suffers some limitations. This was a single-center study; therefore, it is not possible to generalize our data to other populations. Moreover, due to the observational nature of our study, it was not possible to achieve a causal relationship between variables. There is also a possibility of data manipulation by confounding variables. It also would be beneficial to check the seasons when the babies were born to assess the relationship between the season of birth and vitamin D levels.

Copyright © 2021, Modern Care Journal. This is an open-access article distributed under the terms of the Creative Commons Attribution-NonCommercial 4.0 International License (http://creativecommons.org/licenses/by-nc/4.0/) which permits copy and redistribute the material just in noncommercial usages, provided the original work is properly cited.
download pdf 379.39 KB Get Permission (article level) Import into EndNote Import into BibTex
Number of Comments: 0